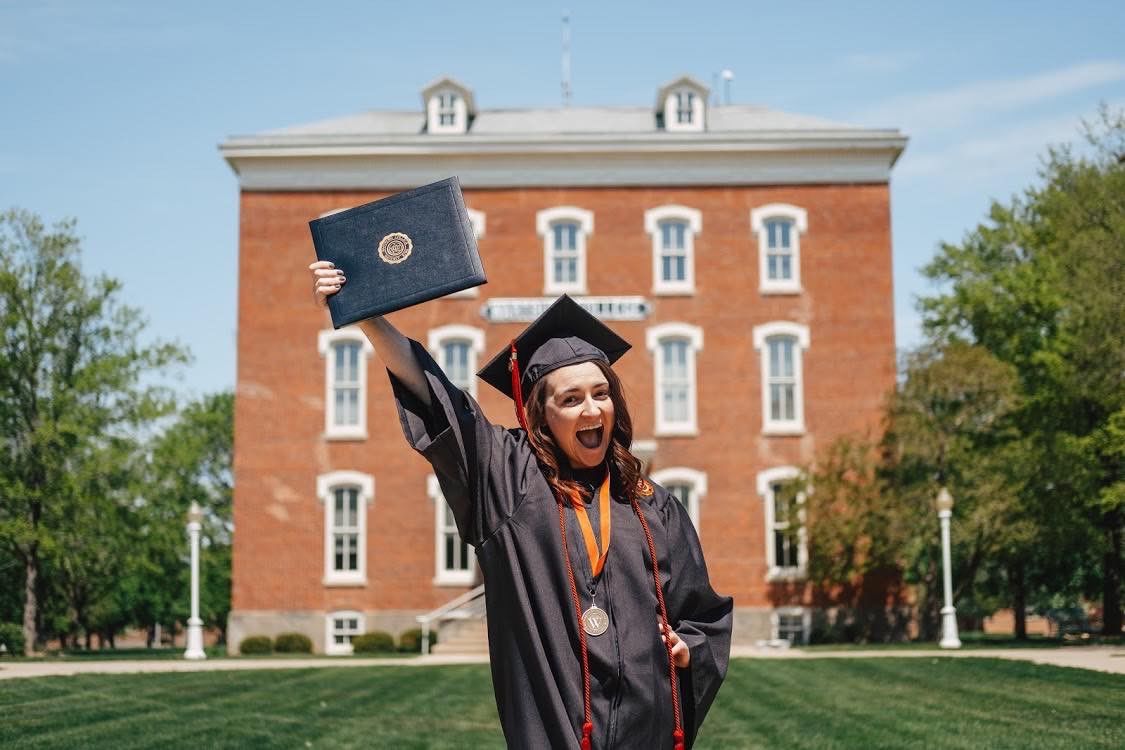 Wartburg College graduate Samantha Pfab celebrates with her degree in hand in front of Old Main. She and the rest of the Class of 2020 went through a virtual commencement Sunday. 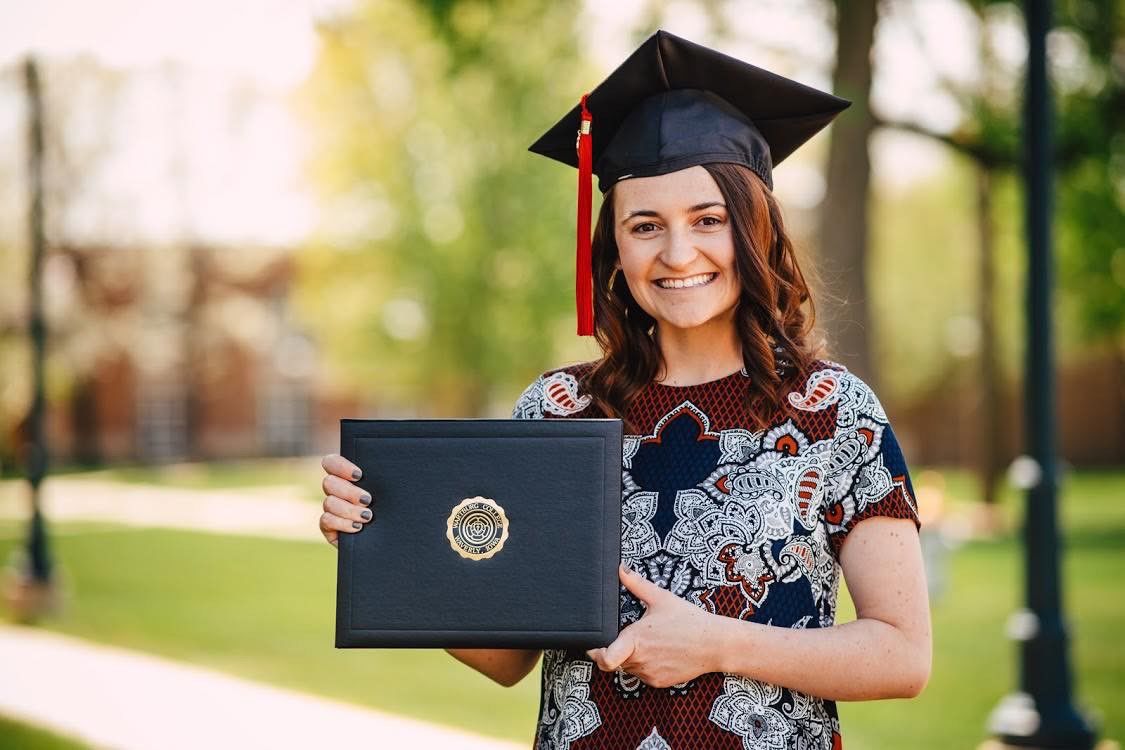 Samantha Pfab poses with her cap and diploma. Due to the COVID-19 pandemic, Wartburg College finished the spring semester and held May term online. 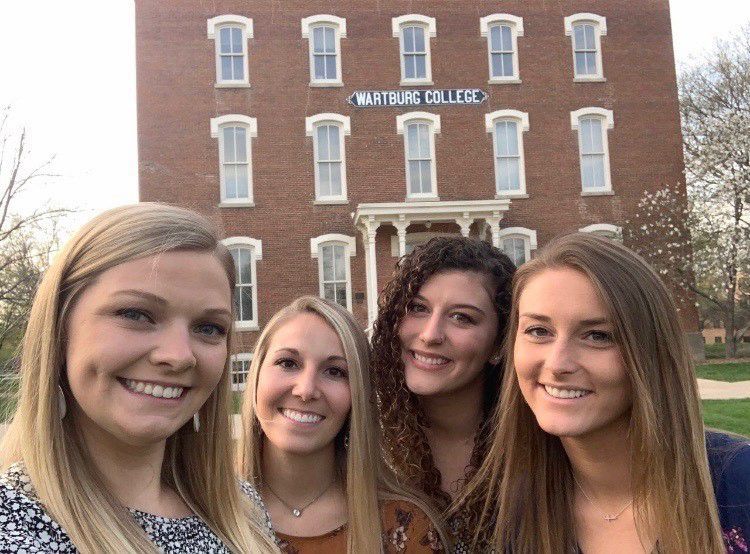 Above left: Samantha Pfab poses with her cap and diploma. Due to the COVID-19 pandemic, Wartburg College finished the spring semester and held May term online. Above right: Andrea Hesse, Karly Fitzgerald, Kelsey Platte and Nicole Lutes enjoy one last moment together on the Wartburg College campus before setting out in the real world. Wartburg held a virtual graduation ceremony Sunday.

Wartburg College graduate Samantha Pfab celebrates with her degree in hand in front of Old Main. She and the rest of the Class of 2020 went through a virtual commencement Sunday.

Samantha Pfab poses with her cap and diploma. Due to the COVID-19 pandemic, Wartburg College finished the spring semester and held May term online.

Above left: Samantha Pfab poses with her cap and diploma. Due to the COVID-19 pandemic, Wartburg College finished the spring semester and held May term online. Above right: Andrea Hesse, Karly Fitzgerald, Kelsey Platte and Nicole Lutes enjoy one last moment together on the Wartburg College campus before setting out in the real world. Wartburg held a virtual graduation ceremony Sunday.

It was the day she realized that the coronavirus had taken a hold of the world for the long haul and changed it significantly.

“I held out hope for a long time that graduation would still happen in person but as the days and weeks went on, I slowly started to accept the truth that would not likely be the case anymore,” said Pfab, a religion major and senior at Wartburg College.

For Pfab, as for many college graduates around the world, hopes were dashed and plans were toppled.

Pfab’s May Term abroad was canceled, and while grieving for the sudden shift, she also found out that her efforts to prepare for Dance Marathon’s Big Event would come to an end, as that fundraiser, which benefits Iowa Children’s Hospital, too, was stricken from the calendar.

A bright light shone in the midst of all the spirit-quashing cancellations when Pfab learned of her acceptance to Princeton Theological Seminary, in New Jersey, where she plans to pursue a master’s degree.

The overall experience was a roller coaster of emotions, especially when the last day of in-person classes began, underscoring the pending change,

Pfab was soon moving out of her campus housing, and the chapter of her undergraduate college career was coming to an end.

While also learning their senior year would be ending differently than anticipated, students in most departments at Wartburg grappled with remote learning.

Karly Fitzgerald, a biology major who is taking classes at Allen College, through a joint program with Wartburg, said the decision to move online was a surprise to her, but soon the nursing instruction also shifted to online mode.

“It was especially hard going from seeing classmates every day to being stuck in the house all day,” Fitzgerald said. “In my opinion, learning solely online came with many added difficulties with things as simple as trying to find somewhere to print all my materials for the rest of the semester, and exams were especially hard to adjust to since we were being proctored from home.”

Even though she was no longer taking classes at Wartburg, the fact that Fitzgerald lived in Waverly added an element of normalcy to her regimen.

“I still felt like I was taking classes at Wartburg because I was still with all my friends,” she said.

Likewise, for Connor Cleveland, a business and administration major, remote learning was just as challenging, especially when it came to group work and class discussion.

However, the reward of iminent graduation made it tolerable.

“Since I am a senior it didn’t bother me because I was basically done with most of my classes,” he said.

While student experiences in navigating a pandemic environment differ, many said the hardest part of finishing the year was leaving without saying a proper goodbye.

Equally unsettling was not participating in the senior traditions of graduation.

“I think the hardest part was not getting the closure I needed to feel ready to say goodbye to Wartburg and not being able to properly celebrate our 'lasts' with my classmates,” Pfab, the religion major, said.

“I’ve felt a strong sense of unity with my class as we have collectively walked through this unexpected ending together but it has been really difficult to not be together physically, to not celebrate together and not enjoy our last moments on campus in each other’s company.”

The list of unfulfilled expectations for Fitzgerald and others includes missing such staples of Wartburg traditions as the senior banquet, the hog roast, the bar crawl, and, of course, the ritual of traditional graduation.

“I can’t help but think about all those fun memories that my classmates and I will be missing out on at Wartburg,” she said.

Like many seniors around the globe, the 290 Wartburg graduates this year had to settle for a virtual commencement on Sunday, May 24.

They found some comfort in the fact that the original date remained unchanged.

The virtual commencement featured photos and videos of the class of 2020, along with speeches from President Darrel Colson, administrators and students.

Not being able to walk across the stage and receive the diploma earned over four long years of hard work was a real disappointment for many.

But like her peers, Fitzgerald was happy to have a celebration rather than none at all.

“I knew this wasn’t going to be the same, but it was going to have to work,“ she said.

Professors who attend commencement and who have a strong relationship with their students said this year’s ceremony is the first of its kind.

Whether professors have experienced Wartburg commencement as a graduate themselves or as educators supporting their students, the virtual graduation is an adjustment for all.

“All commencements have been face-to-face as far as I know. When I graduated in 1989, it was outside in front of Old Main, with seating under the trees south of Founder’s, which was then Grossmann Hall,” said Dr. Terry Letsche, associate professor of computer science.

“Commencement is always a stirring tribute to our seniors and their accomplishments. That, combined with a sense of relief how our unusual academic year has finally concluded is bound to make it emotional. But at the same time, perhaps it will also feel like something happening to someone else since the participants will be watching on computers or their TVs and not feel like they’re actually a part of it.”

The professors also agree the situation isn’t ideal, but hope that the 2020 Knights can still celebrate their accomplishments.

Dr. Zak Montgomery, associate professor of Spanish, said he is hoping to honor his students, using the technology they both have access to.

“There is a paradoxical sense of loss and new beginning, and it is celebratory in both ways simultaneously,” Montgomery said. “It may be more emotional because both students, faculty and staff have forged deep relationships and worked very hard to get to this moment, and we won’t have the opportunity to celebrate and take photos as we usually do. However, we are celebrating virtually and have engaged in celebrations via social media and Zoom with our graduates.”

Pfab said she is grateful for the virtual commencement, but can’t wait to celebrate with her friends in person once the pandemic restrictions are lifted.

“Though we won’t be together physically, we will still be ‘uknighted’ that day... especially as we all watch it at the same time,” Pfab said. “I am really excited for homecoming this fall where there will be a special dinner for the class of 2020 and honestly, I’m looking forward to that weekend and finally coming back together as a class so much.”