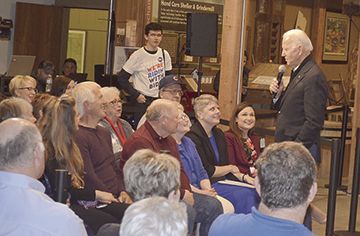 The Biden campaign bus at Heartland Acres on Friday evening. 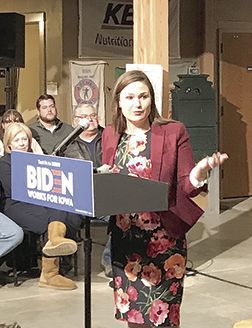 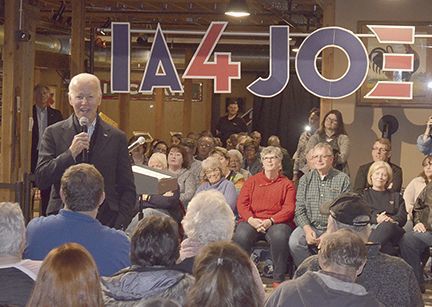 The Biden campaign bus at Heartland Acres on Friday evening.

INDEPENDENCE – Speaking from the heart of Heartland Acres Agribition Center, former Vice President Joe Biden held a town hall event Friday, January 3, as part of his “No Malarkey”/”Battle for the Soul of the Nation” presidential campaign tour.

Rowley native Jodi Grover was given the honor to open the introductions. Grover is a teacher education coordinator for Upper Iowa University/Des Moines campus who has served as a clerk for Iowa Sen. Brian Schoenjahn and most recently a volunteer with the Biden campaign motorcades in Iowa for the last eight months.

Finkenauer announced her support of Biden’s candidacy just the day before. She opened her remarks talking about her family and growing up listening to their political discussions. The discourse was highlighted by the fact different political opinions were shared. She said from those discussions she learned two very important life lessons.

“One was that even though I was a young girl [of 10] I had every right to have a seat at the table with the grown men,” she said.

The second lesson was that even though they disagreed, at the end of the night they would hug and look forward to seeing each other later in the week.

“I remembered thinking that that’s what public policy should be,” she said. “That’s how we should do this.”

Finenkauer then spoke about working as a speaker’s page for the Iowa Legislature in 2007 and listening to the U.S. senator from Delaware, Joe Biden.

She went to say Biden understood the needs of the working class.

“He gets it, that it’s about hope and the idea that if you work hard you shouldn’t just be able to make a living, you should be able to have a good life,” she said. “We need somebody in the White House that who truly believes that we can unify our country, and that there is more value in unity than there is in fear and division.”

Finkenauer ended her remarks by recalling her grandfather, a Dubuque firefighter who had been part of the family discussions and offered her sage advice throughout her life.

“When he got a call to run into a burning building, he didn’t call back and ask, ‘What color is your skin?’, ‘How much money do you make?’, ‘Who do you love?, ‘Where are you from?’, ‘What religion are you?’ He just showed up and he did his job,” she said. “That, my friends, is what I’ve tried to do every single day that I’ve had the honor to represent you the U.S. House. That’s what we need in the U.S. Senate. And it is why I absolutely support Joe Biden, making sure we bring those values of public service back to the White House.”

With that she introduced former Vice President Biden.

Biden opened his remarks by saying, “This election, character is really on the ballot. It’s about the character of the country.”

He complimented Iowans by saying they take candidates seriously and are the most prepared caucus goers. He spoke a bit about the politics of keeping Democrats in the majority in the U.S. House and winning back the U.S. Senate. He spoke about how Iowans look at a candidate’s track record of causes and votes, their effectiveness, and in today’s climate, who can reunite the country.

“Our constitution was written in a way that requires that we get a consensus,” said Biden. “Otherwise, it results in an abuse of power.…I think our democracy is literally at stake. I never thought I would say something like that. I’ve been involved a long time, I’ve served a lot of presidents.…The reason I am running is because of my experience.”

Biden said due to the nature of his job as a senator and as vice president, he has met every major world leader.

“Putin knows I know who he is, and he knows who I am,” he said. “Vladimir Putin doesn’t want me to be president.”

He stated Putin spent a lot of money on Internet “bots” and Facebook posts to spread lies about Biden. He said Kim Jong-Un, the leader of North Korea, had the state news agency print, “Joe Biden is a rabid dog that should be beaten to death with a stick.”

He then stated President Trump has spent a large amount of money to prevent Biden from becoming the Democrat nominee for president.

Later in his remarks, Biden started hitting specific planks of his campaign, including:

- Climate change and how rural agriculture can be part of the solution.

- Education and the need to remove current Secretary of Education Betsy DeVos. Also for more psychologists. Biden also mention how students today have to learn about “duck and cover” on the first day due to gun violence.

- Healthcare – “It should be a right, not a privilege.”

“We need to be able to lead the world,” Biden said, looping back to international relations. “We have a president that treats NATO like a protection racket.…We need to put together coalitions to deal with terrorism.”

In wrapping up his comments, Biden stated that despite what he feels about the current state of affairs in America, he is ever the optimist.

“I’m more optimistic about America’s chances to own the 21st century than I have ever been in my life,” he said. “It’s time we take back the White House, the Senate, and take back our leadership of the world.”