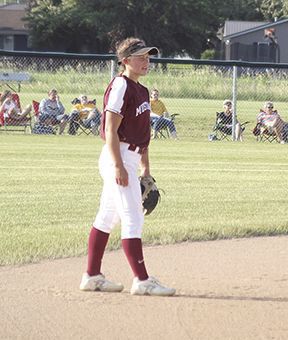 Freshman Marleigh Louvar had two hits in game one against CPU. 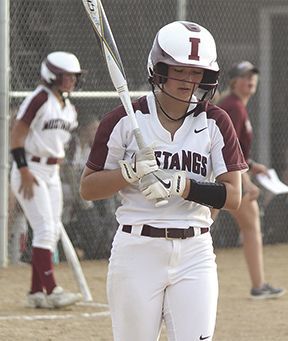 Senior, Allie Jo Zieser is batting .579 so far in the young season and has stolen 4 bases.

Freshman Marleigh Louvar had two hits in game one against CPU.

Senior, Allie Jo Zieser is batting .579 so far in the young season and has stolen 4 bases.

MANCHESTER – The Mustang softball team traveled to seventh-ranked West Delaware on Wednesday night and ran into a pretty darn good team – as well as the Hawks’ senior pitch Macey Kleitsch. West Delaware swept a doubleheader from the Mustangs, 10-0 and 9-4.

The Mustangs had no answer for Kleitsch, who had 6 strikeouts and only gave up 2 hits over five innings. Even though the Mustangs didn’t hit the ball, the story behind this game was some big innings by West Delaware and a series of mishaps in the field.

It was only 1-0 until the third inning, when a fly ball off the bat of Kleitsch was mishandled and dropped, which scored a run. The next batter would fly out, so the Mustangs would have been out of the inning without giving up a run, but another hit brought in another run to make it 3-0 after three innings.

Just like the Maquoketa game, the wheels came off in the late innings, when the Hawks brought 10 batters to the plate and scored 7 runs to end this game after 5 innings.

In the second game, the Hawks added 2 runs in the first off starting pitcher Marleigh Louvar. She settled in and pitched well until the fourth inning, when the inning started with a hit-by-pitch, an error, a base on balls, and another hit-by-pitch. This brought up the bat of Macey Kleitsch, who promptly launched a grand slam homerun over the centerfield fence to make this an 8-0 game.

But the Mustangs didn’t quit and scored 2 of their own in the bottom half of the fifth and 2 more in the sixth. But it was too little, too late. The Hawks won, 9-4.

Head Coach Jordon Pilcher was happy with the way the team bounced back in the second game after having a rough game one. She said, “Overall, we played well in game two, but we have to eliminate the big innings we are giving up defensively.”

West Delaware is a well-balanced team with pitching and hitting, and should compete for the WaMaC title this year.

Coach Pilcher concluded, “West Delaware hit the ball hard, and I was proud of how both pitchers (Kleve and Louvar) battled through it. I think last night was a good experience for our girls, and we will learn and grow from it.”

INDEPENDENCE – The Mustangs played host to Center Point-Urbana on Thursday night in a WaMaC conference battle. Independence managed a split in the two games, losing the first one, 6-2, and winning the second game, 6-4.

One big inning in the first contest was the difference in this one. A 5-run third inning by CPU all came with 2 outs.

Head Coach Jordon Pilcher said, “We had 2 outs that inning they scored 5 runs, so we just need to find a way to get out of those.”

The Mustangs struggled to string together hits and left 7 runners stranded. Sophomore Shanna Kleve was in the circle for the Mustangs and actually pitched well. As was mentioned, she had 2 outs when the big third inning erupted. But other than that big inning, Kleve was very solid. She went 7 strong innings and had 4 strikeouts. She gave up 12 hits, but 6 of them were in the big third inning. So, she scattered 6 other hits over 6 innings, which is excellent pitching.

In game two, Marleigh Louvar was on the mound for the Mustangs and she pitched the best game of her short career, scattering 7 hits over as many innings and only allowing 2 earned runs. Louvar had an impressive 8 strikeouts.

“She really stepped up on the mound last night and did a great job of hitting her locations and taking control of the game,” said Coach Pilcher.

Coach Pilcher concluded, “Offense was better the second game, but we need to string together more hits and get more timely hits. I think we left 14 runners on base between the two games last night.”

The Mustangs played the top-ranked North Linn Lynx Friday night. Stats were not readily available at press time. Check out our Facebook page for the score.

Independence will be back home on Monday, June 22, to face Vinton-Shellsburg in a 6 p.m. start time.