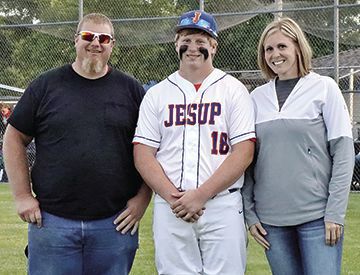 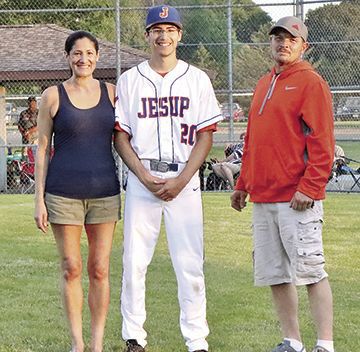 JESUP – The Jesup J-Hawks moved to 3-1 on the season after winning their third game in a row Wednesday night against the Union Community Knights. Seniors were recognized before the game in an on-field ceremony.

Jesup jumped out to a 2-0 lead after one inning, but the Knights battled back to take a 3-2 lead at the end of the third. In the fourth, Jesup exploded for 3 runs and added 4 more in the fifth to make this a 9-3 game after five. Union added one more in the sixth, but Jesup won this one, 9-4.

Senior Brodie Kresser was on the mound for the J-Hawks. He gave up 2 earned runs on five hits and struck out 8 batters for the win.

Kresser had a great night at the plate also, adding 2 hits in 4 at-bats and scoring 3 runs, while stealing 2 bases. Junior shortstop Gavin Nolan had 2 RBI (runs batted in) on a single and scored twice. Senior backstop Cole Oberbroeckling went 1 for 3 with 2 RBI. Junior Jace Pilcher had two walks and a hit in two official at-bats. Sophomore leftfielder Parker McHone added a hit and knocked in one.

DIKE – The J-Hawks traveled to Dike to take on the Dike-New Hartford Wolverines in a battle for first place in the North Iowa Cedar (NICL) East standings.

The Wolverines jumped all over J-Hawk pitching and ran away with this one, 14-4. It was 8-0 after three innings, but Jesup showed some fight, plating 4 runs of their own in the top half of the 4th. Dike-New Hartford added five runs in the bottom half of the sixth, to end this one. The stats were not readily available come press time.

Next up for the J-Hawks, Monday night, June 29th at Columbus.