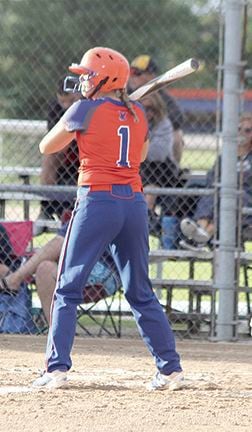 Senior shortstop, Jenna Jensen hit a 3 run homer in the 4th inning of a game against Belle Plaine on June 23rd. 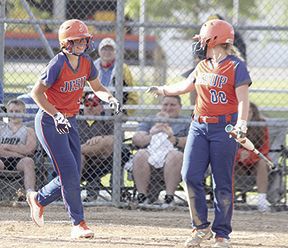 Senior shortstop, Jenna Jensen hit a 3 run homer in the 4th inning of a game against Belle Plaine on June 23rd.

JESUP – The fifth-ranked Jesup J-Hawk softball team hosted the Belle Plaine Plainsmen (1-3) Tuesday night, and this one only went four innings as the bats stayed hot and the pitching and defense stayed solid.

The J-Hawks scored 12 runs on 9 hits, including their first two homeruns of the season.

Head Coach Rod Elson commented, “I thought for the most part the girls were looking for good pitches to hit. Our bunt game was a big factor in setting up the seven-run 4th inning.”

Jesup scored three runs in the first inning on a homerun to left field off the bat of sophomore catcher Alexis Larson, her first of the year. Larson went 2 for 2 with four RBI (runs batted in) and added a double.

The J-Hawks added two more runs in the second inning to break this one wide open. It was 5-0 until the bottom of the fourth, when Jesup scored seven runs, including a bomb (homerun) off the bat of senior shortstop Jenna Jensen. This one was a no-doubter that landed about 220 feet from home plate for a three-RBI night.

Junior rightfielder Kendra McCombs was 2 for 2 with an RBI and a walk. Alexis VanderWerff, a sophomore leftfielder, had two hits and scored two runs.

Senior pitcher Zoe Miller was stellar in the circle for the J-Hawks, scattering four hits over as many innings, and four strikeouts, walking only one batter. She has yet to give up a run this year in 10 innings pitched.

Coach Elson concluded, “As of the fourth game, only one hitter is below .400. Defense has been making plays, and pitching has been good.”

On Wednesday night, the J-Hawk girls hosted the Union Community Knights for one game and came away with their fifth in a row, 10-7. This one wasn’t as close as the score shows. Union scored 5 runs in the seventh inning to make this a competitive game.

Sophomore Alexis VanderWerff was in the circle for the J-Hawks and pitched relatively well, giving up two runs on two hits and striking out one batter.

Shortstop Jenna Jensen hit her second homerun in as many games, going 2 for 4 and driving in 4 runs, while also stealing a base. The always-consistent Zoe Miller went 2 for 3, scoring 2 runs and stealing 2 bases. Kristin Sadler had 2 RBI on one hit. Hailey Nie was 1 for 4 with 2 RBI.

DIKE – The Jesup J-Hawks Softball team traveled to Dike for a NICL Conference match-up. This turned out to be a long ride home for the J-Hawks, as they were upset by the Wolverines, 5-4.

Next up for the J-Hawks is a game today at Lisbon. Game starts at 10 a.m. Jesup will be at Columbus Monday, June 29, in a NICL Conference matchup.