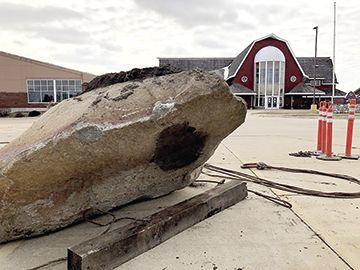 The Buchanan County Freedom Rock is delivered to Heartland Acres. 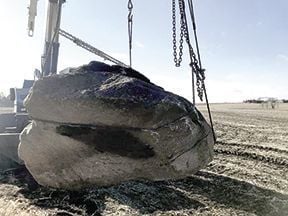 The Buchanan County Freedom Rock gets moved from a field.

The Buchanan County Freedom Rock is delivered to Heartland Acres.

The Buchanan County Freedom Rock gets moved from a field.

INDEPENDENCE – Iowa artist Ray “Bubba” Sorensen II has painted his way through 87 of Iowa’s counties as he creates a series of commemorative, veteran-inspired murals on boulders across Iowa. Collectively, Sorensen’s project has become known as the Iowa Freedom Rock Tour. Buchanan County’s Freedom Rock is one of the 12 remaining murals to be completed.

While the artwork and overall design of the mural is up to Sorensen, the local Freedom Rock Committee is looking for artistic inspiration from the people of Buchanan County. Previous Freedom Rocks have highlighted county-specific themes, significant military individuals, local ties to specific battles, legions and auxiliaries, MIA/KIA/POW, and various other military ties. Any county-specific veteran and military-specific topic will be entertained. The Freedom Rock Committee will share these public submissions with Sorensen as he plans the Buchanan County Freedom Rock mural.

The tour will soon include one Freedom Rock in each Iowa county with a special 100th boulder for our state. Sorensen’s veteran murals won’t end there. His ambitions include creating a 50-state Freedom Rock tour with mural boulder tributes already completed in the states of Missouri, Minnesota, Wisconsin, and Washington.

While Sorensen is not a veteran himself, in a previous interview he told the Sioux City Journal, “I feel like my family and I owe a debt of gratitude to the men and women who have served and are serving and standing at the ready to defend this country. All it’s done is just deepen my appreciation and understanding of what our veterans have done and are doing.”

Ray and his wife came up with the idea for the Freedom Rock Tour after creating murals for the original 1999 Freedom Rock near Menlo, Iowa.

The countywide support of the project has been amazing. Many local businesses and individuals have stepped up to help fund and make donations toward this project.

Please share your artist suggestions for the Buchanan County Freedom Rock with the committee by emailing buchcotour@indytel.com by Monday, February 24, 2020. You may also use the email if you’d like information on making a donation toward this great county project.