Sophomore Marcus Beatty (sliding into second base) had 6 hits against Benton Community on June 29. 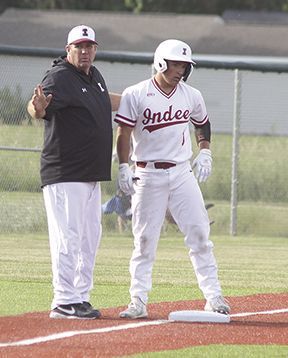 Sophomore Marcus Beatty (sliding into second base) had 6 hits against Benton Community on June 29.

LISBON – The Mustangs packed up their hot bats and headed to Lisbon for a late-morning game on Saturday. This one took eight innings, but Indee held on to beat the 2-6 Lions, 14-12.

This contest went back-and-forth the entire game with the lead changing hands five times and a total of 25 hits between the two teams.

The Lions got on the board first with a run in the bottom of the first inning and led this one through two, 1-0. Then the bats came alive for both teams, starting with the Mustangs scoring 4 runs in the top half of the third inning to take back the lead, 4-1. Both teams added a run going into the bottom of the fourth, when Lisbon exploded for 5 runs of their own to retake the lead, 7-5 after four. Indee cut it to one, with a run in the top of the fifth and, after holding Lisbon scoreless in the bottom of that frame, the Mustangs bats came to life, scoring 6 runs in the sixth to take a (what we thought would be) a commanding 12-7 lead.

This score stayed the same until the bottom of the seventh, when the Lions plated 5 runs to tie this one up and send it to extra innings.

In the eighth, Indee came right back and responded with 2 runs to retake the lead for good and win this wild game, 14-12.

Head Coach Matt Miller noted, “Offensively, we were proud of our how we responded during the game. Despite giving up a lead, we are proud of how we fought back after playing a fairly long week of baseball.”

This young Mustang team has struggled to close games this season, but with that said, they have also responded very well offensively.

“We will continue to work on finishing games,” added Coach Miller. “Baseball is a game where players must keep a fairly even emotion throughout the game.”

Sophomore Jake Sidles got the win in relief, going 1 2/3 innings, giving up 2 hits, and striking out 5.

Sophomore shortstop Marcus Beatty stayed “en fuego,” going 5 for 6 for the game, raising his season average to .545 and his on base percentage (OBP) to an impressive .651. Beatty had 2 RBI (runs batted in) on five singles, scoring two runs and stealing a base. Senior centerfielder Kaleb Lamphier has hit safely 5 times in 5 official at-bats over his last 2 ball games and has reached base in 7 consecutive plate appearances. Lamphier was 3 for 3 in this game, including 2 walks.

Freshman second baseman Mitch Johnson added two hits and drove in 3 with a double and a triple. Senior Logan Schmitt had 3 hits, including a double and 3 RBI, and scored 3 times. Sophomore backstop Keegan Schmitt was 2 for 4, with an RBI and two base on balls.

Sophomore pitcher Teegan McEnany had a double and a single and knocked in 1, while sophomore rightfielder Dalton Hoover contributed with 2 hits and scored once.

The Mustangs win their fifth straight game to raise their overall record to 7-4.

Coach Miller concluded, “Our coaching staff just loves being around these guys each day!”

VAN HORNE – It was another road trip for the Independence Mustangs, as they traveled to Benton Community High School for a WaMaC showdown against the Bobcats, who came into the contests with a 5-5 record.

It wasn’t easy, but when all was said and done, the Mustangs won two big games and moved their record to 9-4 on the season.

Game one was back and forth throughout the contest with Benton jumping out to a 2-0 lead in the first inning off starting pitcher Drew Beatty. Independence bounced right back with 2 of their own in the third inning, and it was 5-4 Benton in the top half of the sixth when the Mustangs went off for 5 runs to take a 9-5 lead. Benton added two in the sixth and only one in the seventh, and this ended 9-8.

The Mustangs have had issues all year giving up late-inning runs and closing out innings, but the offense is very explosive and, when you are scoring a lot of runs, you can hide those inconsistencies.

Coach Miller commented, “While we still have some work to do preventing the big hit with 2 outs, we are so proud of this team so far.”

Sophomore shortstop Marcus Beatty went 2 for 4 with a double and scored 2 runs. Beatty also stole two bases. Sophomore leftfielder Teegan McEnany had a great ball game, collecting 3 hits, including a double and 2 RBI, and stealing a base. Freshman first baseman Korver Hupke added 2 hits in four at-bats, with 1 run knocked in. Senior centerfielder Kaleb Lamphier extended his on-base streak to 10 consecutive plate appearances with a hit and two walks. Sophomore rightfielder Dalton Hoover added a hit in three at-bats, with an RBI and a run scored. Senior three-bagger Kaine Millard added an RBI on a single.

Game two saw Indee score 6 runs in the top of the third inning to break this one open. It was 8-1 going into the bottom of the seventh inning, and what has been Indee’s Achilles heel, the Mustangs gave up 4 runs, but held on to win this one 8-5.

Marcus Beatty continued to hit, adding 4 more hits in game two, and three of those were doubles. Beatty knocked in 2 runs and scored 3 times. And breaking news…the speedster did not steal any bases!

Senior designated hitter Logan Schmitt added two hits and 2 RBI. Freshman Mitch Johnson was 2 for 3 with an RBI. Kaine Millard and Dalton Hoover each added an RBI. Korver Hupke was on the mound for the Mustangs and had 3 strikeouts and gave up 1 earned run in 5 innings.

Coach Miller concluded, “We feel we have much we can improve on as we get closer to the postseason.”

Next Up for the Mustangs

The Mustangs travel to Class 3A top-ranked Central DeWitt (11-1) on Thursday, then return home next Monday for a 5 p.m. contest against Center Point-Urbana.

A clear sky. Low around 60F. Winds light and variable.