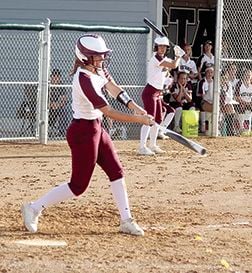 Senior Gabbi Good smokes a single to right center in game one against Beckman-Catholic on June 24. 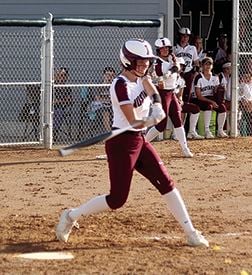 Senior Mary Puffett with the first inning single in game one against Beckman-Catholic on June 24.

Senior Gabbi Good smokes a single to right center in game one against Beckman-Catholic on June 24.

Senior Mary Puffett with the first inning single in game one against Beckman-Catholic on June 24.

INDEPENDENCE – After two straight rainouts, the Mustangs were back on the field Wednesday night hosting the Beckman-Catholic Blazers in a twinbill on BankIowa Field.

The Mustangs bats came to life, scoring 24 runs in two games and sweeping the Blazers. Indee runs their record to 4-4 on the season.

In game one, the Mustangs won 16-9, scoring all their runs in the first four innings. A six run first inning was sparked by eight of nine batters reaching base and this lit a fire in the bats of every starting Mustangs batter, all of which had at least one hit in the contest. They continued to feast on Blazer pitching with five more runs in the second inning, answering right back after Beckman-Catholic put up five of their own in the top half of the 2nd.

Indee scored two more in the 3rd inning and added 3 runs in the bottom of the fourth.

Sophomore, Shanna Kleve was in the circle in game one, scattering 11 hits over 7 innings and striking out 6 batters.

Offensively, the Mustangs had 16 hits as a team. Senior first baseman, Allie Jo Zieser stayed hot, going 3 for 3 at the plate, which included a triple and knocked in 2 runs while scoring 3 times and stealing a base. Eighth grade sensation, Havanna Griffith added two hits, including a double and drove in two and stole a base. Senior center fielder Gabbi Good was 3 for 4 and had 2 RBI (runs batted in). Senior third baseman, Mary Puffett added two hits and two RBI, while scoring two times. Freshman shortstop, Marleigh Louvar broke out the brand new bat and had 3 RBI in this contest. Junior second baseman, Brooke Beatty with an outstanding day at the plate, going 2 for 4 and driving in 4 runs. Freshman left fielder, added a hit and two sacrifices. Senior backstop, Kenzie Fischels had an RBI on one hit and walked two times and scored 3 runs while stealing one base. Shanna Kleve had a hit and walked once.

In game two, this one came down to the last at-bat and Indee wins it 8-7.

The Mustangs jumped all over Beckman-Catholic in the first inning, scoring 4 runs and taking command of this one early. It was 5-1 in the top of the fifth when the Blazers scored 6 runs and took a 7-5 lead. But the Mustangs continued to hit the ball and scored runs in the fifth and sixth to tie it going into the bottom of the seventh.

In the seventh Puffett lead off and flew out to left field, bringing up the hot bat of Allie Jo Zieser, who promptly singled up the middle. Then Kenzie Fischels came to the plate and doubled to drive in Zieser to win it for the Mustangs.

Head Coach Jordon Pilcher was very happy with the girls offensively, “1-9 we hit the ball well and strung hits together for some big innings.”

The young Marleigh Louvar took the ball for the Mustangs in game two and got the win. She scattered 7 hits over 7 innings striking out 7 batters. She walked 10 batters and hit one.

What can Allie Jo Zieser not do? This All-Stater has been amazing this summer, batting .654 in eight games. In game two, Zieser went 3 for 4 and drove in 2 runs. The ever consistent Gabbi Good knocked in two runs. Marleigh Louvar added 2 hits in 3 at-bats with a triple and a double. She scored 2 runs and drove in one. I think she’s liking that new bat! Havanna Griffith went 2 for 3, with an RBI and scored twice. Griffith also stole a base. Dakota Whitman had a hit and scored once. Mary Puffett went 1 for 4 and stole a base. Kenzie Fischels is quietly having a fantastic senior season. She is batting .500 on the year and seems to always have the big hit. Fischels added two hits in game two, including the clutch game winning double in the bottom of the seventh.

“In game 2 we didn’t give up and fold under pressure when they took the lead in the 5th inning,” added Coach Pilcher, “Overall it was a good night.”

The Mustangs will be on the road Monday, June 29, when they travel to Benton Community. Game time is 6 p.m.

Overcast. A stray shower or thunderstorm is possible. High 83F. Winds ESE at 5 to 10 mph.