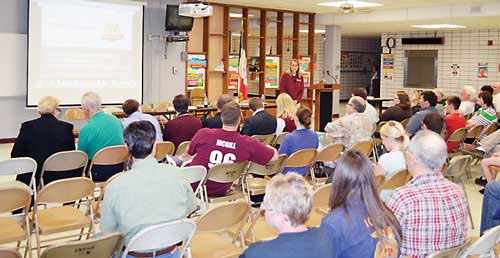 Almost 100 people came out Wednesday, March 21 to the West Elementary Commons to speak and or listen to the possibility of adding back an agricultural education program. Here, High School Principal Jennifer Sornson reviews information compiled in a Plant the Seed brochure for the community. (John Klotzbach Photo) 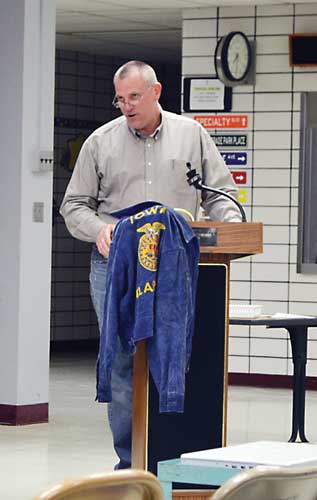 Almost 100 people came out Wednesday, March 21 to the West Elementary Commons to speak and or listen to the possibility of adding back an agricultural education program. Here, High School Principal Jennifer Sornson reviews information compiled in a Plant the Seed brochure for the community. (John Klotzbach Photo)

INDEPENDENCE – Supporters who have worked hard to bring an Agricultural

Education program and FFA Chapter back to the Independence Community School District (ICSD) have reason to celebrate. The Plant the Seed campaign members presented the ICSD Board of Education with a proposal to add an Agricultural Education program back into the Jr./Sr. High School class offerings starting in the 2013‐2014 school year.

ICSD has not had an Agricultural Education (previously known as Vocational Agriculture) program and FFA Chapter since 1963. When the instructor at the time passed away, a replacement instructor was not hired despite the District’s strong ties to agriculture. Many residents have attempted to reinstate it during the 49 year absence.

“Plant the Seed members spent countless hours researching various other Ag Ed programs, putting together potential class offerings, forecasting the financials, and speaking with district farmers and employers to prepare a well‐rounded proposal for the board’s consideration,” stated Jennifer Sornson, committee volunteer and ICSD’s Jr./Sr. High School principal. “We know that a program of this kind is an incredible opportunity for our students and we wanted to be well prepared to answer any questions.”

A couple of current ICSD Jr./Sr. High School students attended the special board meeting and communicated their desire to be a part of an agricultural education program in Independence. Both students spoke eagerly of obtaining agricultural internships and learning new skills both in the classroom and with on the job training. One student even referenced some of the academic statistics mentioned in the committee’s presentation. Studies have shown that on average FFA members have exhibited more growth in science than the average student.

Many adult guest speakers shared how their experience in a high school FFA and agricultural education program changed their lives and put them on the path to success.

“My younger brother thought school ‘wasn’t his thing’, and was not doing well in school,” said Amy Kelly, ISU Extension Outreach Coordinator/Bookkeeper. ”One of his instructors suggested he sign up for an ag ed class and it changed his life. Agriculture was something he was interested in and he could see all around us in a rural farming community. He felt at home in ag ed and excelled. He now has a job in agriculture and is very successful.

One of the primary questions the committee addressed during their presentation was how this new program would be funded.

“It is our goal to make this a self‐funded program, which means the District would be provided funds for operations,” said Scott Frye, committee volunteer.

Program supporters have built relationships with area farmers and agriculture product suppliers who have already pledged to donate seed, fertilizer, equipment and labor to plant and harvest the crops. Indee Agricultural Education, Inc., a non‐profit corporation to be formed, would farm the District’s remaining 50‐55 acres of land. All revenues would be deposited and held by the Mustang Foundation, Inc., a 501(c)(3) entity that supports District initiatives. These revenues would be given to the District to help pay for the program. The District owns 92 acres of farm land. Approximately 40 acres is being developed for the new Jr. / Sr. High School campus.

Committee members proposed leasing the District’s land in 2012 to get a one‐year jump start on funding. Supporters have already donated this years’ rent, and the inputs and labor have been pledged.

All profits from the crop’s harvest will then be rolled over to 2013 to pay for the 2013 rent. When the program starts in the fall of 2013 at the new Jr. / Sr. High School, the Mustang Foundation, Inc. would advance funds to the District to cover the expenses of the program, such as the instructor and supplies.

The committee has prepared a five‐year profit and loss statement and five‐year cash flow showing that the program will support itself. One component of the funding would be annual donations of grain from area farmers. The committee explained that 100 farmers donating 50 bushels of corn would generate over $25,000 a year at today’s corn prices. The estimated budget continues on up to 2016 and accounts for the cost of an instructor’s benefits and salary as well as general administrative fees such as utilities and maintenance costs for allowing that instructor to use a classroom.

Another question raised during the board meeting was whether the District would be willing to allow nearby districts, such as East Buchanan, to participate in the new Ag Ed program.

“We would absolutely be willing to allow neighboring students to participate in this new program starting in 2013,” Superintendent Jean Peterson stated.

Currently, the committee is putting together a lease agreement for the board’s review and upon Board approval in early April, they will begin planting the first crop. The Board will then review the progress of the funding plan in January 2013 before giving the final approval to officially launch the program in the 2013‐2014 academic year. An instructor would then be hired in the spring of 2013.

“It is very important that the District have a strong relationship with all sectors of the communities,” stated Board President Brian Eddy. “One of the reasons we are fortunate enough to be building a new Jr./Sr. High School right now is because of the relationships developed within the agricultural community. Brandon, Independence and Rowley are agricultural‐based communities and Ag Ed seems to be a great tool to provide our students to be prepared for the many careers an Ag Ed program can prepare you for.”

“We are confident in our estimates and believe the program will be officially added in 2013,” said Sornson. “This is an incredible time to be in our district. The new Jr./Sr. High School will be a great location to launch an ag ed program and the students involved are going to learn so much.”

Any questions regarding the Independence Community School District Agricultural Education Program, may be direct to Superintendent Peterson at jpeterson@independence.k12.ia.us or 319-334-7400 or by visiting www.agicsd.com.

Partly cloudy skies in the morning will give way to cloudy skies during the afternoon. A few flurries or snow showers possible. High 21F. Winds W at 5 to 10 mph.