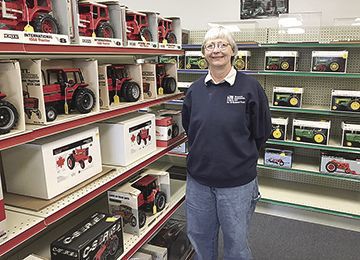 Kate Bossen with inventory at her Lamont business, Bossen Implement. 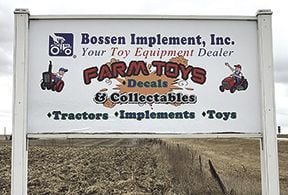 Kate Bossen with inventory at her Lamont business, Bossen Implement.

LAMONT – Kate Bossen is well-known in Lamont as a generous person who supports local causes, such as the annual pedal/pull contest during Lamont Days.

She is also recognized internationally for her business, Bossen Implement, Inc., as a dealer in John Deere, Farmall, Case, and dozens of other farm equipment brands. While many other implement dealers display their products outside in the parking lot, Bossen – as a farm toy dealer – displays her equipment on the shelves inside.

In 2020, Bossen will celebrate her 35th anniversary in business.

Her career was quickly launched after graduating from South Dakota State University in 1980 with an engineering degree. After an accelerated internship with Case IH, she was placed with a dealership in Oelwein.

During college, she became acquainted with the hobby of collecting farm toys. Growing up in South Dakota, her brothers collected “Hot Wheels,” but she collected “Matchbox” cars.

“Matchbox cars were replicas of actual cars,” she said, appreciating the authenticity.

She also had a pedal tractor that she rode all over town, even after the rubber wore down to the rims.

In 1981, she attended her first toy show. She enjoyed getting to see the area and meet people with a similar affinity for collecting. She began to show and deal in her favorite brand, becoming known as the “Case Lady.”

In 1985, she decided to take her collecting hobby to the next level and started a part-time business. In 1991, she decided to move to Lamont and open a full-time store and mail-order business. By then, Bossen had built up a network of collectors all over the world. When she started, there were only two farm toy manufactures, Ertl and Scale Models. Over the years, the number zoomed to almost 40.

In 2009, she was inducted into the National Farm Toy Museum’s Hall of Fame. Her nomination stated that Bossen Implement “helps toy farmers with equipment sales, parts, and service or restoration like the real implement dealer. Being located in the small rural town of Lamont, Iowa, did not stop Kate from doing business worldwide. In addition, Kate is a contributing author for many of the published farm toy books and price guides, including The Standard Catalog of Farm Toys and Dicks Farm Toy Price Guide. Kate also lends her extensive knowledge of farm toys and the agricultural industry to the National Farm Toy Museum Advisory Board.”

Bossen attributes her success to hard work and customer service.

“We go the extra mile for our customers,” she said.

In her office are several toys on display from her own collection. Her favorites include a set of Case tractors from the early 1980s made of cardboard and wood. Another favorite, far from expensive, yet very rare is a plastic David Brown tractor from a 1950s English cereal box.

Bossen is proud to say she has “everything from Avery to Zetor” in stock.

But now that claim may soon be applied to decals only.

Last year, she was approached by someone interested In buying her out. The deal fell through, but it got her thinking maybe now was the time to downsize.

She has scaled back her hours to 9 a.m. to 12 p.m., Monday through Friday, and by chance in the afternoons and Saturdays at the store, located on Hwy 187 S (300 Washburn Avenue) Lamont.

Visit Lamont and find out why Bossen Implement is “your complete farm toy equipment dealer!”