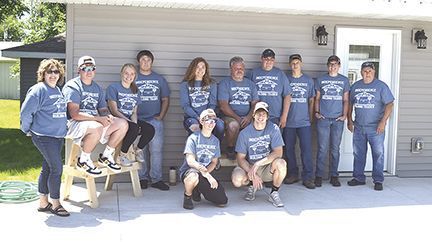 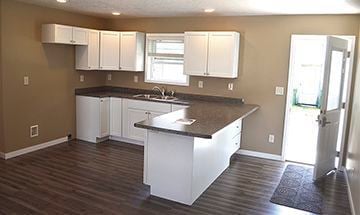 Above: This photo shows the open design of the kitchen with room for refrigerator and stove on the east wall and stools to dine at the counter on the west end. There are ample electrical outlets for modern devices. Right: More storage was designed into the kitchen counter. 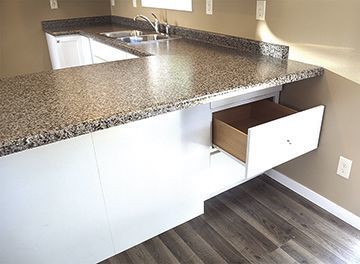 More storage was designed into the kitchen counter. 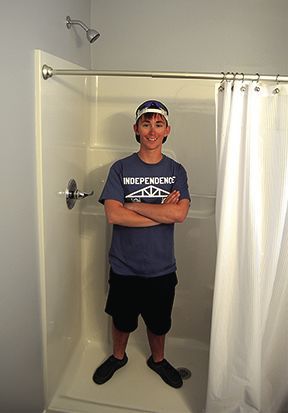 The 2020 Building Trades class at a recent open house. 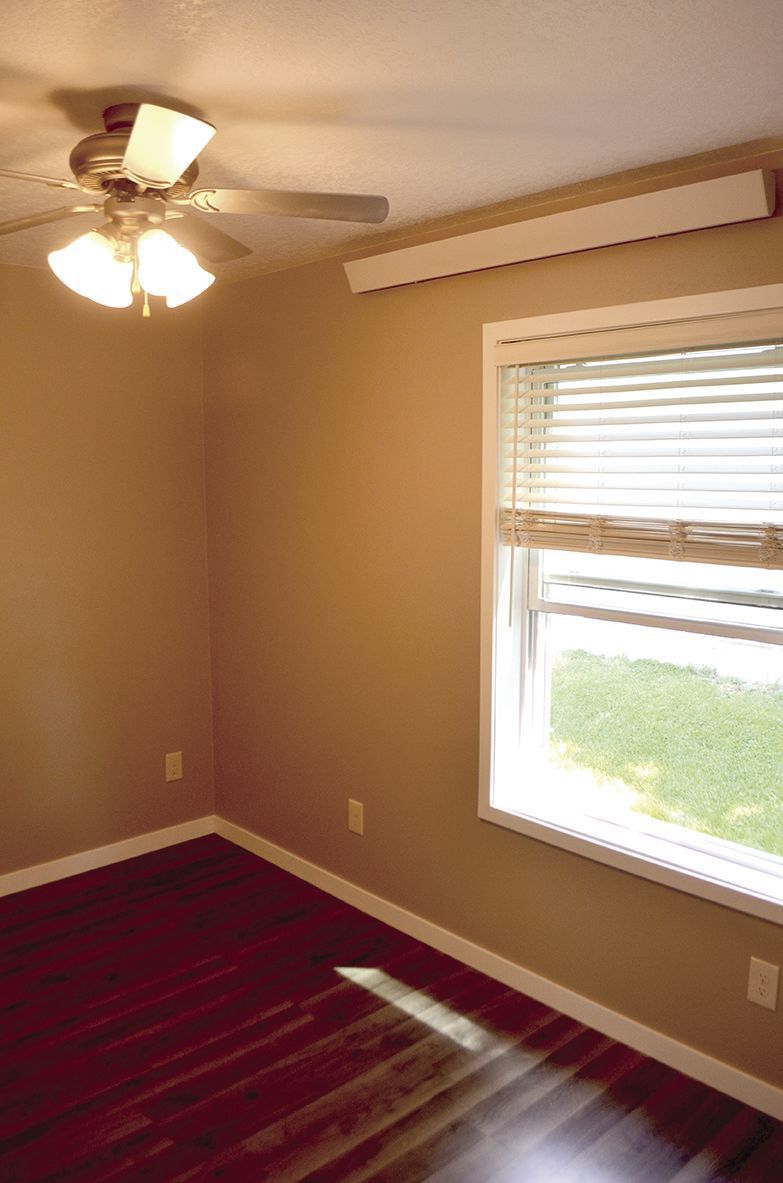 The bedroom is small but efficient.

Above: This photo shows the open design of the kitchen with room for refrigerator and stove on the east wall and stools to dine at the counter on the west end. There are ample electrical outlets for modern devices. Right: More storage was designed into the kitchen counter.

More storage was designed into the kitchen counter.

The 2020 Building Trades class at a recent open house.

The bedroom is small but efficient.

The home is the latest in the nearly 60-year history of the Building Trades (BT) program for the Independence schools. The class has thrived and survived through many changes in recent years – economic downturns, changes in sponsorships, and now the coronavirus.

Last fall, the BT class began construction of a small home at 301 5th Street SE. It was the site where a house was torn down after a fire a few years ago. Fortunately, a two-stall garage survived.

The sponsor for the project was Doug Cue. This was his fourth small home collaboration with Trish O’Loughlin (instructor) and the BT program.

The 624-square-foot home features one bedroom, one bathroom, and an open floor design with ample windows strategically placed to balance light and noise.

The kitchen has no wasted space for storage. The contiguous countertop runs from the east wall, along the south wall with a double-bottom sink, then turns north in a U-shape to form a large breakfast bar.

There is a great closet in the bedroom, and a utility area with space for a stackable washer/dryer.

The outside features maintenance-free vinyl siding a durable metal roof. There is no basement, but there is storage in the detached two-stall garage.

The location is within walking distance to downtown shopping to the north and the Aquatic Center to the east. To the south is the Wapsipinicon River and the walking trail.

The journey of the build took a turn in March when the coronavirus closed the school and shut down the program. Instructors had to quickly get creative with school work. O’Loughlin was not allowed to be with her students on-site, but did email and post resources for the students to review.

In addition, Corey Stoner, parent of BT class member Parker Stoner, stepped up and helped organize work parties to complete the inside trim work, cabinets, and flooring, as well as the outside siding and roofing. Also helping the class with the roofing was carpenter Don Cook. Cook has shared his skills several years on other BT builds, but this year was special as his grandson Landry Jones was part of the crew.

“I couldn’t be more proud of this crew,” said O’Loughlin. “They were all hardworking, particular, and dedicated students. They were such an exceptional group to teach this year! Even after school had to close for the year, this group still showed up – on their own – and without me being there. They came in and worked with parent Corey Stoner to finish up the siding and a few interior touchups. Luckily, we were ahead of schedule when school was called off. They wanted to finish the job that they started and honor the commitment they had made to our sponsor and the program itself.”

“It was fun,” said Landry Jones. “It was a good group to work with. [O’Loughlin] got us resources on Google drive. Corey really helped us out.”

The best part of the experience for Annabelle Magsamen was seeing the house progress and come together. She learned the importance of “making sure to take the right steps so there are no problems in the future.” She plans to study architecture at ISU this fall.

Keegan Zimmerly also enjoyed setting rafters and working on the sheet metal roof. He plans to become a zoological veterinarian for large animals. He says it will take four years of study at ISU and another four years of advanced study at Kansas State University.

He also enjoyed working with laminate flooring. His plans for the fall include playing football for Ellsworth Community College and studying small business administration.

O’Loughlin is grateful for the support from local businesses, especially Precision Plumbing, Diamond Enterprises, Custom Concrete, and Spahn and Rose.

“I am very thankful for Doug Cue for having an open house so the students’ families could come and see all of the good work they had done,” said O’Loughlin. “I am also thankful for Corey Stoner for understanding that the students would want to finish and giving them the opportunity to do so.”

In addition to the four builds he has sponsored, Cue has plans for at least two more properties in coming years.

“It was a great class,” said Cue at the open house held June 14. “They displayed attention to detail and had great attitudes.

While the smaller projects of the past few years have been more economical and faster to construct, O’Loughlin said they still offer students the opportunity to learn about all phases of construction.

A clear sky. Low around 65F. Winds light and variable.