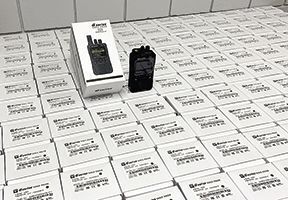 The G4 Unication voice pagers ready to be configured. 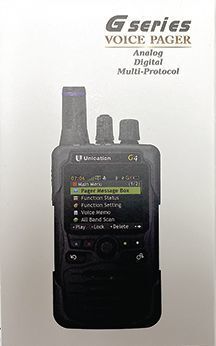 Closeup of the voice pager.

Equipment on the radio tower by the Emergency Management Center at the Buchanan County Courthouse will be upgraded as part of the project.

The G4 Unication voice pagers ready to be configured.

Closeup of the voice pager.

Equipment on the radio tower by the Emergency Management Center at the Buchanan County Courthouse will be upgraded as part of the project.

INDEPENDENCE – After two years of planning, researching, and acquiring bonding, Buchanan County has taken the next step in upgrading emergency communication equipment.

According to Chris Hare, E911 coordinator, the $5 million project entails administrating the acquisition, documentation, configuration, and eventual distribution of almost 300 voice pagers and about 350 radios to emergency responders throughout Buchanan County.

The new radios are in line with technological advancements that would make the current system inoperative in a few years. The units will use digital instead of analog transmissions. They will feature better inter-agency communication, which is important considering there are a dozen fire departments and ambulance services, the four area law enforcement departments, plus other out-of-county agencies. In addition to the pagers and radios, upgrades to the four radio towers will feature the addition of new communication dishes.

“The system will be redundant,” said Hare. “There will be two ways ‘in’ and two ways ‘out.’”

Another benefit will be security. The transmissions can be digitally encoded, and not available to common scanners.

Hare expects the $5 million project to be a benefit to taxpayers in the long run – from equipment maintenance to property insurance.

“These units will save lives, both first responders and the public,” he added, referencing getting help efficiently and effectively to where it is needed.

Some clouds early will give way to generally clear conditions overnight. Low 8F. NW winds shifting to SW at 10 to 20 mph.