A shot of the action from the 2021 Sam Farrell Memorial Pool Tournament and Auction. 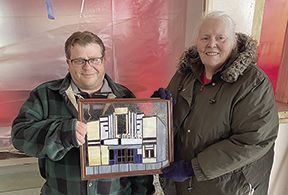 Diana Farrell (right) presents Malek Theatre Foundation President Tony Fitz with a stained glass artwork created by Mike Wilkinson. The piece was created and sold at a fundraising auction. The Farrell family donated it to the foundation for display in the theatre. 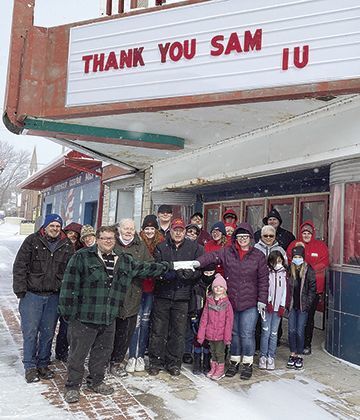 A shot of the action from the 2021 Sam Farrell Memorial Pool Tournament and Auction.

Diana Farrell (right) presents Malek Theatre Foundation President Tony Fitz with a stained glass artwork created by Mike Wilkinson. The piece was created and sold at a fundraising auction. The Farrell family donated it to the foundation for display in the theatre.

INDEPENDENCE – Sam Farrell passed away April 22, 2015, after complications from surgery. He was 25.

“He was a funny, loving, bright spot in our lives, and we wanted a way to turn our grief into something good,” said Leah Loeb, Sam’s sister.

The family, led by Sam’s aunt, Kathy Main, started the Sam Farrell Memorial Pool Tournament and Auction in 2016 to be a celebration for his January birthday. The first year, $5,300 was raised and donated to River Hills School (Sam had down syndrome and graduated from River Hills in 2011). In 2017, $6,000 went to Special Olympics of Northeast Iowa. In 2018, $10,150 went to Retrieving Freedom in Waverly, a 501©3 non-profit organization dedicated to training service dogs to help people, primarily to serve the needs of veterans and children with autism. In 2019, Wildthunder Wildlife & Animal Rehab received $7,000. In 2020, a $3,100 scholarship was given to an Independence Mustang going into education – Ali Zeiser.

“Every year we have picked a cause that benefits our community and raises money in his name to celebrate his birthday,” said Loeb. “We do this as a family. My parents, Steve and Diana Farrell, choose the benefactor, and my brothers and cousins fill in and help. Our extended family and friends continue to show up, donate, play pool, and buy auction items every year, and we have so much fun.”

“IU is how he said ‘I love you,’” Loeb said. “I love seeing all the IUs on people’s shirts, masks, and hats when I am out and about. Even going to Walmart and randomly seeing someone in a past year’s shirt with an ‘IU’ over their heart brings a big smile.”

This year, the pool tournament and auction were held at The Crowbar. The proceeds from the event, in the amount of $6,575, went to the Malek Theatre Foundation.

“The Board of Directors for the Malek Theatre Foundation were very grateful to receive a check for $6,575 from the Sammy Farrell Fundraiser presented by the family,” said board member Barbara Paull. “This is a tremendous help for the mission of ‘Bring Back The Malek’ and the board wishes to thank everyone who participated in the fundraiser held on January 23. Once restored, the goal is to operate [the Malek] as a live performance theatre showcasing plays, musical talent, dance, and special film festivals.”

Paull emphasized the purpose of the restoration.

“Some think we are going to try to become a first-run movie theatre again and be in competition with Starlight and that is not true,” Paull said. “If we can, we could have film festivals of vintage movies like westerns, comedy movies, and musicals. We also plan on being able to rent out the space for events.”

“As a 501©3 non-profit for over a year now, the foundation continues to seek ways to fundraise to help its mission,” said Paull. “For over 10 months, we continue to accept can and bottle donations for redemption.”

Cans and bottles may be dropped off in the bins in front of the Malek doors on 2nd Street NE, or arrangements can be made to have them picked up by calling or texting a message to 319-427-0251.

The Malek Theatre Foundation received a $12,000 grant last fall from The State of Iowa Historical Society for the permanent repair of the roof. They have already completed a temporary repair of the leaking roof, reattached the north marquee and secured the south marquee, added a LEXAN board for hanging letters, added the LED lighting to the marquees, and are now operating the lighted marquees for a three-day period on the weekends. Other fundraiser events are in various stages of preparation.

“It is so encouraging and very much appreciated,” said Paull. “It is a tribute to the inspiration of Bob and Dorothy Malek’s vision resulting in 50 years of fond memories for many patrons. We support that as well as the long-held desire of recently deceased Jodeen Fitz whose wish, along with her family, was to restore the theatre to its former glory by preserving its historical design, beauty, and decor.”

Partly cloudy skies in the morning will give way to cloudy skies during the afternoon. Slight chance of a rain shower. High 39F. Winds SSE at 10 to 20 mph.