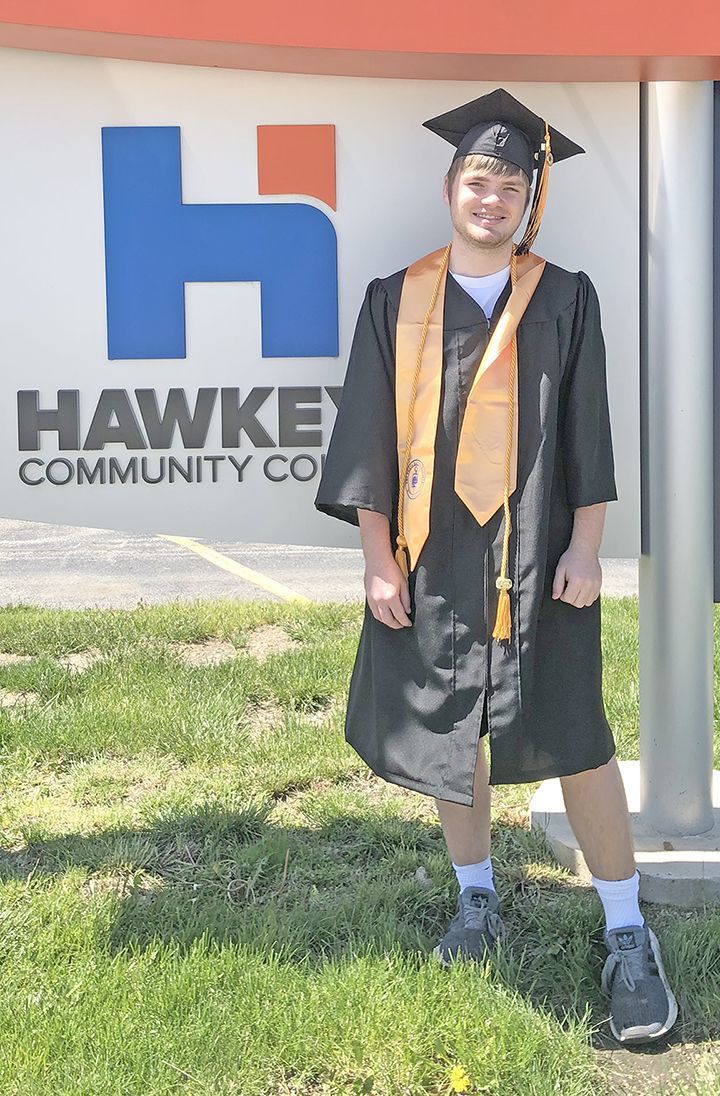 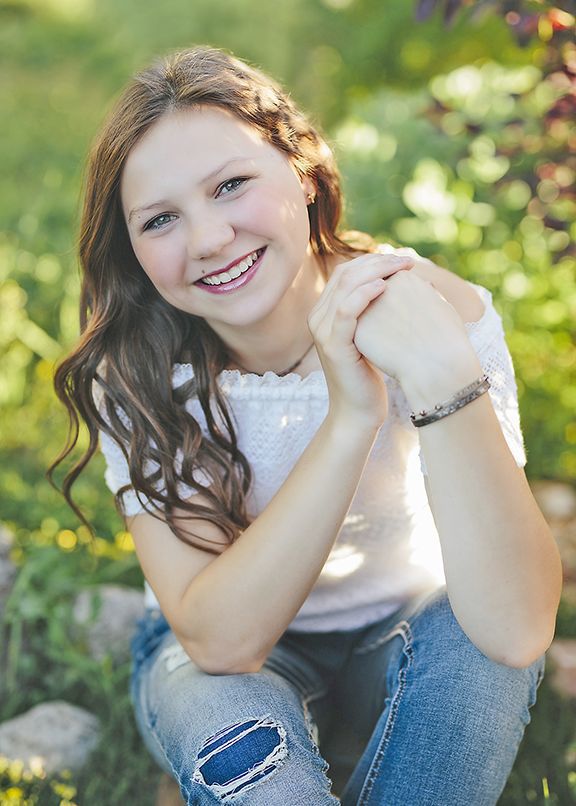 INDEPENDENCE – In an academic year where the classroom and extracurricular activities were cut short, two Independence High School seniors stand out. Makenzie Homan and Parker Sweeney, both 18 and from Independence, are earning their high school diploma and two two-year college degrees – an associate of arts (AA) and an associate of science (AS) – all at the same time.

They took advantage of dual enrollment opportunities – like many of their peers – during high school by enrolling in college courses offered by Hawkeye Community College (Hawkeye). Dual (or concurrent) enrollment means students may take courses that fulfill both high school and college credits. These college classes taken during the school year are free, for the most part, paid by the school district, so the credits earned during high school enable mean getting a four-year degree in less time and for less money.

Hawkeye is holding a virtual graduation event on Friday, May 29, at 7 p.m. Independence High School’s graduation ceremony plans are still in the works. Tentative dates in June, July, and August have been suggested.

Park and Makenzie cite various reasons for pursuing college degrees during high school, but both were influenced to do so by Megann Bohlken, who graduated from Independence High School in 2017.

“The first year I signed up for the classes, Meg Bohlken graduated with her two-year degree while still in high school. After seeing that this was possible, I made it my goal, and have been working for it ever since,” said Parker.

Makenzie was similarly motivated. “I had talked to Megann Bohlken about her plans. She was graduating high school with her AA degree and, from that point, I knew I wanted to do the same thing,” she said.

Financial considerations were also part of Parker’s strategic plan. “I originally started taking classes because I wanted to get as much of them done as I could to save money for when I go to a university,” he added.

Both Parker and Makenzie plan to continue their education at the University of Iowa and pursue medical careers. Makenzie will major in human physiology on the pre-med track. Parker will pursue undergraduate degrees in the biology/pre-med track and in Spanish, followed by medical school.

“These degrees will shorten my time in undergraduate school and lighten my class load for the first couple of years. I will begin my time at Iowa as a junior! When I finish my undergrads, I am hoping to go to med school,” said Parker, “but if I end up changing my mind I want to be a Spanish teacher or go teach English in Spain.”

Parker’s interest in Spain and the Spanish language are real. He spent the first semester of the 2019-20 school year in Santander, Spain, as a foreign exchange student.

While Makenzie will be the same age as most of the freshman entering college this fall, she’ll be ahead of then in the classroom.

She said, “Since I am transferring in my associate degrees to Iowa, I will technically be starting my freshman year as a junior, in terms of credits. However, the plan is to take three full years of classes, instead of two like a transfer student, before applying to medical school, allowing me to have the college experience and take some fun classes along the way.”

Getting an Early Start

Makenzie and Parker got an early start on their college classes.

“I started taking just a couple of college classes my freshman year,” Makenzie said, “because I wanted to make sure I would be up for the challenge. I enjoyed them, so when it was time to sign up for classes for sophomore year, I spent more time trying to figure out exactly what I needed to take to accomplish my goal of graduating with my AA. Throughout high school, I took 21 college classes. Some weren’t much harder than my high school classes, while others really pushed me to improve my study skills. Many students at the high school take advantage of college classes, so I was able to study with students who were in my class, which helped.”

She continued, “Many of my first classes that I took were taught at the Independence center before school by the same Hawkeye professors that teach on the main campus. After my first few semesters, I began taking classes that were offered online. My senior year, I took Calculus through the ICN [Iowa Communications Network] room at the high school. My entire class was able to have real-time conversations with my teacher, without having to travel to the main campus.

“However, I did take Human Anatomy & Physiology each semester of my senior year on the main campus. It is a lab class, so there wasn’t any way to take it online. In total, from my first semester of freshman year through my final semester of senior year, it took me eight semesters to earn my AA and AS degrees; however, 19 of my 21 classes were taken in just six semesters, from sophomore to senior year.”

Parker’s experiences were similar. He said, “I started taking classes my first semester freshman year, when I took the main three that people usually take [Oral Communications, Composition I, and Composition II). Only one of these were online and the other two were at the high school. After freshman year, I started to take a heavier class load that was all online. Overall, it took me seven semesters to complete my degree.”

The potential downside of dual enrollment is that the grades earned follow the student through high school and beyond, so taking these courses may not be for everyone.

She went on, “Taking college classes outside of school definitely conflicted with other things, especially my morning and afternoon jazz band rehearsals. Throughout high school, my teachers were understanding of my other commitments, which was the main reason I was able to participate in so many extracurriculars, while also maintaining good grades and enrollment in college courses.”

While the school district pays for the college credits students earn during the school year, there are some expenses not covered.

“Most of my classes were dual enrollment. The classes I took during school were free for the most part. The ones I took in the summer I had to pay for, but other than those, I just had to pay for the books for the classes,” said Parker. “These classes will definitely help me save money for my four-year degree.”

According to Makenzie, “I was responsible for my textbooks and transportation to my classes that weren’t in the high school. Since I have had the opportunity to complete so many credits while in high school, I will be saving the cost of an entire year of tuition and room and board while at Iowa – roughly $20,000 if I was living on campus!”

“My family helped me a lot to achieve my goal, especially my mom. There were always there to help. I liked sports [football and soccer] the most because I got to spend time with my friends and work hard every day to improve myself,” he said.

When he puts the books aside, Parker likes to hang out with friends and play soccer and video games. In college, he plans to play some intramural sports.

Speaking about the impact of COVID-19 on his senior year, he added, “Obviously, this is not an ideal senior year, but I am trying to make the best of it. I have been working a lot at Del Rio, a Mexican restaurant here in Independence, earning money and preparing myself for college as much as I can.”

He plans to take a trip to South Carolina with friends this summer.

“My parents have always been extremely supportive of me and have allowed me to be able to take as many classes as I have….There were some challenges…but [they] were there to help out when I needed the assistance,” she said.

Her favorite high school memories revolve around band competition trips and golf meets, when special bonds were formed with fellow students. Hawkeye afforded her new and different experiences that she enjoyed, too.

“In college, I hope to participate in the dance marathon and possibly student government.”

Makenzie has put much thought into her future, saying, “I am hoping to volunteer at the hospital and get involved in research. I will hopefully be accepted into medical school. Since third grade, my dream job has always been to be an ear, nose, and throat specialist.”

This summer, she’ll continue to work at Kegler, Kegler, and Arend Dentistry a few hours each day. She has travel plans for the end of July.

And while the COVID-19 shutdown has been disappointing, she’s made the most of it.

“I have been spending a lot of time studying for finals week, organizing things for my graduation party, which will hopefully be held in July. I have been able to facetime my friends many times, but it will definitely be nice when I can see them in person again,” she said.

Showers likely and possibly a thunderstorm in the morning, then some lingering showers still possible in the afternoon. High 72F. Winds N at 10 to 15 mph. Chance of rain 100%. Locally heavy rainfall possible.