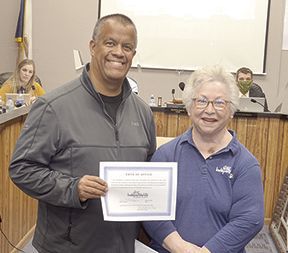 Juan Rodriguez was administered the Oath of Office by Mayor Bonita Davis to be the Ward 1 Council Member. 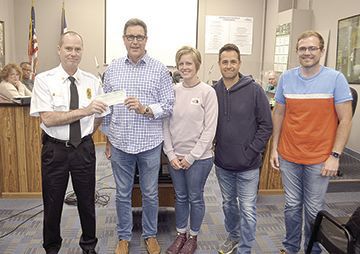 Juan Rodriguez was administered the Oath of Office by Mayor Bonita Davis to be the Ward 1 Council Member.

INDEPENDENCE – While maintain many social distancing guidelines, the Independence City Council meetings are opening up a bit more to interact with the public and get the work of government done. At the June 22 meeting, the council welcomed Juan Rodriguez as the new Ward 1 council member. Rodriguez will serve the 18 months left of Mike Hayward’s term. Hayward recently abdicated his position after moving out of the ward.

Rodriguez was born and raised in Chicago. He and his family moved to Independence in 2001. He has volunteered his time and talents for many activities and organizations, including the Chamber of Commerce (serving as board president and with the Ambassadors), Lions Club, and Rotary Club. He was also an original member of the Independence Day Celebrations Committee which oversaw the July 4 activities in Riverwalk Park and created BrewBQ. He has been involved with several community organizations, such as his kids’ sports, music, and school activities, and has provided DJ services for Jingle on Main, Downtown Trick or Treat, and school dances.

Professionally, he has been in the financial services business for 27 years. He has owned and operated Cedar Valley Wealth Management Inc. for 10 years here in Independence.

“I’m interested in being on the council to serve my ward and, more importantly, to serve our community,” said Rodriguez. “I feel the 1st Ward has had a hard time keeping good representation since Mr. Holland passed away.”

Rodriguez said he did not have a particular project or issue to champion.

“If I had to pick anything,” he said, “it would be to continue to look for ways to make Independence a great place to live and work for families. I believe in responsible growth of a community, and growth is necessary.”

Rodriguez believes he can use his leadership skills on the council.

“I have the ability to work with people in different capacities for the greater good of the organization,” he said. “I feel I can communicate and listen to anyone with an open mind and can take a leadership role if needed or stand back and be a worker bee. I have been in many leadership positions in my career and I feel comfortable helping or leading.”

Monday night was also made special by members of Triumphant Church.

Back at Christmas time in 2019, Triumphant Church decided to make community donations, including $1,500 to the Independence Fire Department. Due to the coronavirus, the in-person check presentation was delayed six months. On Monday evening, Pastor Lance Fricke and Triumphant Church members Amber Hudson, Andy Hudson, and Tyler Kane presented the check to Fire Chief Dick Newton. Newton thanked the group and said it would be used for firefighting equipment.

- Two events were approved. The public Fourth of July fireworks aerial display to be launched from private property within city limits was unanimously approved. A private block party on August 15 for residents on Carrie Avenue in the Jackson Green Subdivision was approved with a split vote of 5-2 (Hanna and Callahan dissenting).

- Greg DeBoer was reappointed to the library board for a four-year term. Brad Schultz and George Lake were appointed to the board. Schultz will serve four years and Lake will serve two years to finish the term of Sam Andersen, who is moving to Winthrop.

- The council approved using a speed tracking camera from Sensys Gatso along Highway 150 between Dairy Queen and Vern’s True Value. The council also approved the use of a speed camera in a vehicle donated by Sensys Gatso to be used as a traffic control mobile unit. Council Member Deb Hanna voted “nay” on both motions, as she has stated all along she feels the cameras are not as much about safety as they are about making money. Sensys Gatso will monitor the cameras and report possible traffic violations to the Independence Police Department for review and possible action. Tickets issued for violations will be of a civil nature, not criminal.

As reported in April, City of Independence Code of Ordinances, Chapter 71.03 states, “In no event will an Automated Traffic Citation be sent or reported to the Iowa Department of Transportation or similar department of any other state for the purpose of being added to the Vehicle Owner’s driving record.”

Ordinance 70.02 set up a schedule of fines for violations detected by the Automated Traffic Enforcement System.

- City Manager Al Roder said there are quite a few punch list items to complete on the Melone Creek Bridge project. He also reported Mark Luloff, waste water treatment plant / water department superintendent, will be retiring at the end of July.

- Police Chief Dustin Dallenbach reported Sgt Lau was promoted to captain as Captain Brinkema accepted another position. He also reported Fairbank Police Chief Klint Bentley is resigning his current position to be on the Independence force starting next week. Another department change will be the retirement of Officer Rick McFerran after a career spanning more than 40 years.