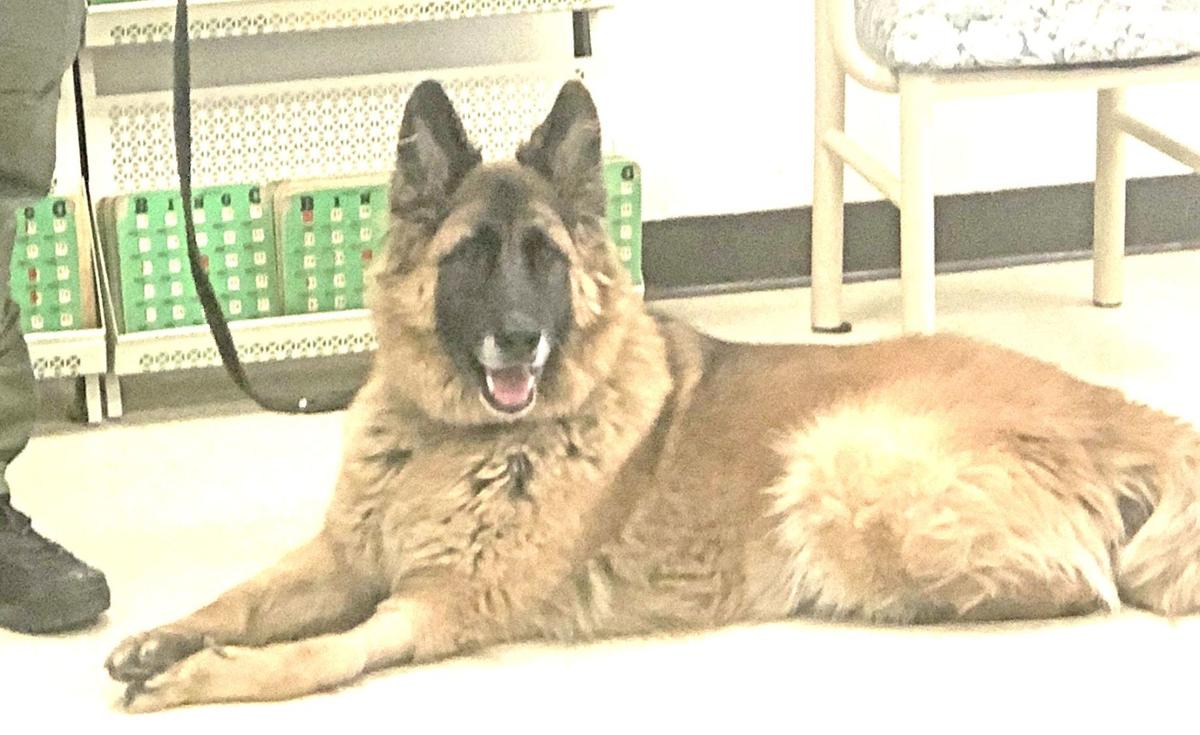 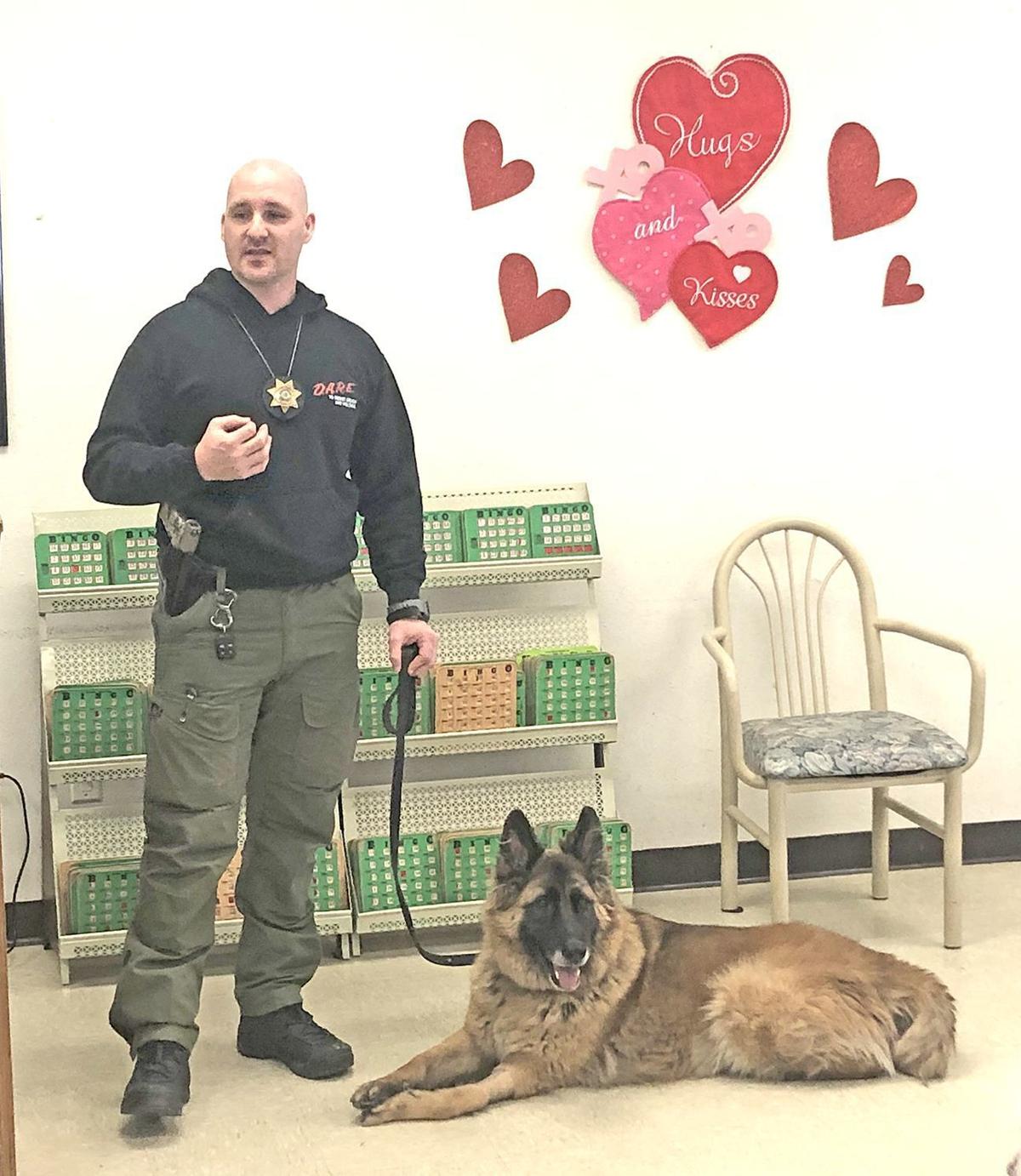 INDEPENDENCE – Area seniors who paid a midday visit to the Buchanan County Senior Center in Independence on Wednesday enjoyed a presentation by some very special guests. Buchanan County Deputy Ben Ward and K9 Officer Koda were on hand to talk about their partnership, answer questions about the work they do, and to demonstrate some of Koda’s amazing skills.

Ward has been a deputy for about 15 years, and has worked mostly the third shift. “I’m usually going to bed about now,” Ward said with a smile shortly after the 12:30 p.m. presentation began.

While Ward did the talking, one couldn’t help but keep their eyes on Koda, a six-year-old long-haired Belgian Malinois from Slovakia.

“I couldn’t ask for a better partner,” Ward said of Koda. “He’s my best friend. We’re together 24/7.” It was clear to all present that Koda feels the same way about Ward.

“At home, he’s always looking for Ben,” said Ward’s wife, Kristy, who was also in attendance at the senior center. “Koda won’t listen to anyone else. He loves to please Ben.”

Deputy Ward confirmed that Koda only takes commands – verbal and non-verbal ones – from him. “He’s very well-trained, and he knows when it’s time to go [to work].”

According to the American Kennel Club (AKC), the Belgian Malinois (or Mal, for short), “is a smart, confident, versatile, and world-class worker who forges an unbreakable bond with his human partner. To deny a Mal activity and the pleasure of your company is to deprive him of his very reasons for being.”

In Europe, the squarely built, hardworking Mal has a reputation as a proud, alert herder known for the proud carriage of its head. This people-oriented dog needs plenty of exercise with its adored human companion – this is the key to the breed’s happiness.

The Belgian Malinois resembles a German shepherd, but the head is different, and the Mal is leggier and finer boned. In addition to working in law enforcement, the breed has proved to be invaluable to the military in the 21st century. Cairo, a Mal and member of Seal Team Six, played a critical role in the 2011 raid that took down Osama Bin Laden, the terrorist mastermind behind the attacks against the U.S. on 9-11.

Koda is strong and well-muscled, and weighs just 80 pounds. He looks much bigger, but that’s because of his thick, coarse, yet soft coat of fur. For a big dog, he is quite agile and graceful. He became Deputy Ward’s partner four years ago.

From his birthplace in Slovakia, Koda made his way to Vohne Liche Kennels in Denver, Indiana – a place that, according to its website, “specializes in strong social police dogs.” Ward personally chose Koda, who was the first dog he saw at the facility.

“He looked pretty rough, neglected, when I first saw him. He was 18 months old, weighed 46 pounds,” Ward said. “His training started there.”

Ward “commands” Koda in Dutch, like his original trainers did. There are multiple benefits of this form of communication.

Koda also responds to hand signals from Ward because, in their line of work, there are times when silence is a must.

“Koda has dual purposes in law enforcement – to sniff out the odor of illegal drugs, and tracking,” said Ward, “and tracking is my favorite.”

When Ward says “the odor of drugs,” he means Koda can smell the odor left behind by drugs such as heroin, marijuana, ecstasy, methamphetamine, and other narcotics even after they have been removed from a scene.

As a tracker, Koda’s training and keen sense of smell make him an expert when searching for suspects, missing children, or individuals with dementia.

Koda has had many successful drug finds, tracks, and bites. Yes, bites.

“He is trained in officer protection, trained to bite, and has done so on the job when necessary,” Ward said.

Like any other member of law enforcement, Koda works in some dangerous situations. “He’s the first to go in,” said Ward, “and he has a bullet-proof vest like me.”

“But when the uniform [a special sheriff’s collar] comes off, he’s just like any other dog. He plays with our kids, or simply watches them play,” said Ward’s wife, Kristy. The Wards have three children, ages seven to 18.

“And his heavy coat is a year-round thing. We could fill pillows with the hair he sheds,” she said with a laugh.

Ward said he wouldn’t have a dog that wasn’t safe to have around his children, or the children they interact with at school presentations.

One member of Wednesday’s audience asked if Koda gets dog treats. He does, but not the kind he can eat.

“To Koda, a treat is when I toss him a tennis ball, that’s his reward,” Ward responded.

During the presentation, Ward gave Koda a number of commands, verbal and non-verbal ones, to get him to freeze, follow, etc. And with Koda locked up in their patrol car, Ward hid a small amount of narcotics within the senior center, then brought Koda in to “sniff them out.” He do so successfully.

“You saw that he started to walk away from where they were, then stopped, turned back, and locked up,” said Ward, indicating that he’d located the drugs.

When Koda isn’t working, he lives with the Ward family. He even goes on vacation with them.

They really are best friends.