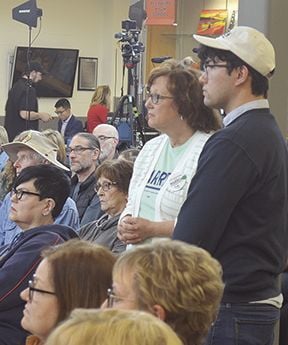 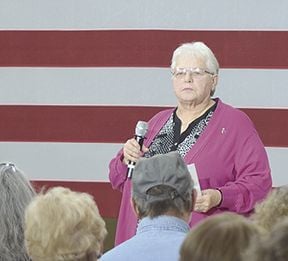 Manchester resident Judy Haynes spoke about why she changed party affiliations from Republican to Democrat before introducing Sen. Warren. 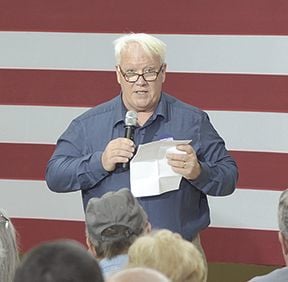 Independence resident Mike O’Loughlin spoke about being a progressive Democrat and why he supports Sen. Warren for president. 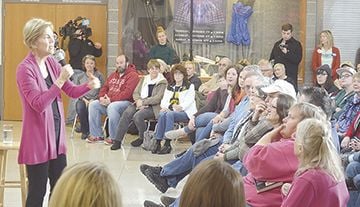 Manchester resident Judy Haynes spoke about why she changed party affiliations from Republican to Democrat before introducing Sen. Warren.

Independence resident Mike O’Loughlin spoke about being a progressive Democrat and why he supports Sen. Warren for president.

O’Loughlin, a teacher at Mental Health Institute – Independence and an Independence City Council member, described himself as a progressive and has always supported progressive candidates. He said he is supporting Warren for president because he was impressed with her plans, including reducing the cost of college debt, health care for all, and reducing the cost of medications.

“When I look at Elizabeth Warren, I see a presidential candidate with vision and plans, but also a coalition builder who can raise a grassroots movement to make the changes we need,” he said.

Another opening speaker was Judy Haynes of Manchester.

“Last year I was a Republican,” said Haynes. “I switched parties because I saw the Republican Party actively obstructing legislation that could help my family.”

She spoke about attacks on the Affordable Care Act, which had helped her family. After seeing “many bills die on Mitch McConnell’s desk,” she could no longer back a party that did not care about her family.

“Health care is deeply personal to me,” said Haynes, a caregiver for her son who is paralyzed from the chest down.

She said one of the final straws was when an insurance representative came to her house, took one look at her husband, and said he could not offer insurance to them.

She is going to caucus for Warren because of her health care for all plan.

“Elizabeth knows when we make investments in our society, we all do better,” she said.

Haynes had the honor of introducing Warren.

Warren began her remarks by giving a little biographical information.

She grew up in Oklahoma and knew at an early age she wanted to be a teacher. She went to college, but dropped out to get married. She later returned to an affordable college and became a special education teacher. After becoming pregnant, her principal let her go. She went to law school, practiced law for 45 minutes, but returned to her first love, teaching.

“I traded little ones for big ones,” she said about becoming a law school instructor, specializing in bankruptcy and financial law.

Through it all, she had a passion for what was happening to America’s working families.

“Why do families today find the path [to prosperity] so much rockier and so much steeper?” she asked. “The answer is about decisions being made in Washington. It’s about who our federal government works for.”

“When you see a government that works great for those with money, and not so great for everyone else, that is corruption pure and simple, and you need to call it out for what it is,” she said. “If there is a decision to be made in Washington, I guarantee you it was influenced by money.”

She went on to say she has a “big structural change” plan to get big money out of political influence, including ending “lobbying as we know it,” ending the “revolving door between Wall Street and Washington,” and requiring every federal candidate to submit tax returns.

“We need to start to hold our government accountable,” she said “…and make this country work for everyone.”

Warren then took questions from the audience. The questioners were selected at random by having a ticket drawn. Among the people selected was a little girl, who asked what Warren’s favorite book is. Warren’s answer: “The Little Engine That Could,” because it speaks to people’s tenacity to overcome obstacles.

Another questioner selected by chance was Independence resident Bobbie O’Loughlin, wife of Mike O’Loughlin, who spoke earlier. A nurse for 43 years, she said she’s worked in the mental health field but is currently employed at an adult day center. Her question revolved around one of her clients who could not continue to use their long-time psychiatrist because of insurance changes.

“I am just appalled by this,” she said. “These people do not have a voice. I want to be their voice. I want to stick up for them.…Why are we allowing this to happen? I want some change. I really feel you are going to be our next president. I have total faith in you. Change this for us!”

Warren responded by thanking O’Loughlin for being a nurse and standing up for her clients.

She said she would defend the Affordable Care Act, bring down the cost of prescription drugs, and offer full health care coverage for everyone who wants it. Warren said her plan would not cost middle class families any extra. It includes increasing taxes on the top one percent and big corporations that don’t currently pay any taxes, and her “personal favorite,” cracking down on the tax cheaters.

Warren feels America is headed toward Medicare for all.

After the event, Bobbie O’Loughlin said she was very pleased with Warren’s answer. Not only as a nurse, but as someone with a family member with Asperger’s, she believes in Warren’s ability to be a health care advocate.

Besides health care, audience topics included childhood obesity, which led to a discussion on food and sustainable local farming for crops other than corn and soybeans. She would advocate for the ability for farmers to provide more diversity to local consumers.

Another topic was high credit fees and usury laws. Warren began her answer by referencing Hammurabi’s Code of ancient Mesopotamia (c. 1754 BC) and then laws created to control “payday lending” in the 1980s. In 2007, as a Harvard Law School professor, Warren proposed the creation of the Consumer Financial Protection Bureau (CFPB) a watchdog agency for financial issues, similar to the Consumer Product Safety Commission. She said there were two reactions to her idea for the new bureau: “Great idea” and “Don’t even try.” CFPB was signed into law in 2010.

She wrapped up her comments by asking people to get involved by making a donation of $5, working a phone bank, or knocking doors.

Although none of the audience questions were about the recent killing of known terrorist Iranian General Qasem Soleimani, the national media asked her for comment after her speech.

“Donald Trump is taking us to the brink of war,” she said. “This administration can’t keep their stories straight [about the incident].

Showers this morning, becoming a steady rain during the afternoon hours. Some sleet or freezing rain possible. Morning high of 50F with temps falling to near 35. Winds NW at 10 to 20 mph. Chance of rain 90%. Rainfall near a quarter of an inch.

Some clouds this evening will give way to mainly clear skies overnight. Low around 25F. Winds NNW at 10 to 20 mph.