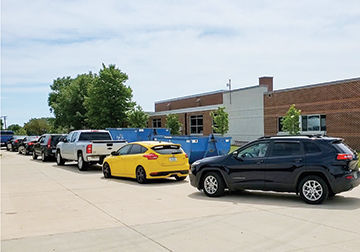 Cars filter out of the West Central School lot in the third memorial ride for Kaiden Estling, on the second anniversary of his death, on Saturday. 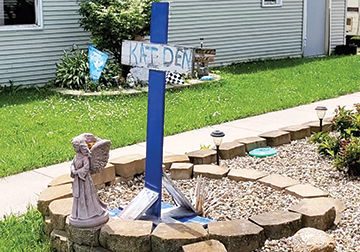 A garden memorial for Kaiden Estling dots a lawn in Maynard as a block up, the third memorial ride, on the second anniversary of his death, filtered out of town on Saturday.

Brady Denny recalled Kaiden Estling sticking up for him before a ride on the second anniversary of his friend’s death.

April Estling of Maynard, left, was greeted on her son Kaiden’s memorial ride Saturday before leaving from West Central School by Misty Cook of West Union, whose daughter Lyric was also found dead after a disappearance with different circumstances in 2012. Cook said she was heartened by the arrest of a suspect Friday in the Estling case.

Cars filter out of the West Central School lot in the third memorial ride for Kaiden Estling, on the second anniversary of his death, on Saturday.

A garden memorial for Kaiden Estling dots a lawn in Maynard as a block up, the third memorial ride, on the second anniversary of his death, filtered out of town on Saturday.

MAYNARD — Kaiden Estling attended school in Oelwein through third grade, until his mother April Estling moved to Maynard in fall 2011 and be began at West Central School.

“It was fun hanging out with him,” said Brady Denny, who knew Kaiden almost since he began attending West Central School, where they took part in a trading game in the halls.

“When I got older I got to know him a lot more and I came over to his house and hung out with him and his (younger) brother,” Denny said. They attended church and martial arts together, and Kaiden had his back.

“There was a kid that said, ‘Let’s play a game without Brady,’ and Kaiden stood up and said, ‘No, we are going to keep Brady in the game because no one’s going to stand out of the game,’” Denny said as motorcycles revved their rumble packs to begin the ride.

“He was a gentle giant, kind,” April Estling said earlier Saturday before starting the third Kaiden Estling Memorial Ride, on the second anniversary of his death. “He would stick up for kids being bullied, he would always make sure if you didn’t have a friend you would have a friend in him,” and like any 14-year-old, he could also be “loud, crazy.”

Estling would have been 17 in November, but a hit-and-run took his life on June 28, 2018. The then-14-year-old was driving a moped southbound along Highway 150, when he was struck by a vehicle over two miles south of Fayette whose driver fled the scene. Rescue personnel made multiple life-saving attempts, but Estling was pronounced dead on site.

Late Friday, the day before the annual memorial ride, Fayette County Sheriff Marty Fisher announced the arrest of Kelli Jo Michael, 26, of Des Moines, on charges of vehicular homicide by reckless driving, a Class C felony, and leaving the scene of an accident which resulted in a death, a Class D felony.

Some 80 people responded on Facebook for this year’s ride, and Estling ran out of the 15 extra black T-shirts she ordered — for those who didn’t order one online — by the time the ride began shortly after 11 a.m. on Saturday.

“Last year we had 62 or something,” April Estling said. “And the first year was last-minute so we only had 30-something, so it doubled in size from the first time to the second time, so we’ll see what today brings.”

She explained the impact of the crash on her 9-year-old, Amir, who was 7 at the time.

“He was actually with me the night that the accident happened,” Estling said. “Kaiden didn’t come home when he was supposed to, so I tried calling him. I went out and being a single mom I had to take his brother with me.

“I got the call at 10:35 telling me that the police had found him,” she said, her voice breaking, then composing herself. “So Amir saw, he was with me that night, he was there. I don’t even think I told him. It just happened so quickly, my parents came out, my dad sat with him in the car, and I’m pretty sure my dad told him what had happened.”

It was her younger son’s first experience with grief.

Estling herself is no stranger to grief. She lost two relatives to motorcycle accidents, a cousin 2004, and an uncle three or four years ago.

But not as close as her son.

Going forward, she wants other drivers to be aware.

“Watch where you’re going. Slow down. I see a lot of crazy drivers speeding through town, and it scares me. Just be aware. Especially, stay off your phones. Just drive safe, be safe.”

“Obviously a guilty conviction,” Estling said as to her hopes if the case goes to trial. “I hope the judge upholds the sentence and that there’s no plea deals.”

She doesn’t plan to bring Amir in case of a trial, for concern it wouldn’t be age appropriate. “Maybe on the last day, during sentencing, but not throughout the trial.”

For a nearby parent awaiting justice for her child, the news brought gratitude for a friend, and a renewal of faith.

Misty Cook of West Union is the mother of Lyric Cook, 11, and aunt of Elizabeth Collins, 9, who disappeared in July 2012 near Evansdale and were found dead by hunters in Seven Bridges Wildlife Park near Readlyn, the State Medical Examiner’s Office confirmed on Dec. 10, 2012.

“I just found out yesterday on Facebook that they charged someone in April’s case and I was astonished,” Cook said. “I’ve known her since these cases have been going on. (We’ve) been going out to the rides together.

“(The arrest) couldn’t have come at a better time,” Estling said, in an Oelwein Daily Register Facebook Live video. “It was truly Kaiden and my dad and God looking out for us on that one, because we prayed so hard for today to be the day that we got to ride for justice and not hoping for answers.

Any money that comes from the ride goes into a Remembering Kaiden Estling Memorial Scholarship account at Maynard Savings Bank, and each year the seniors at West Central can apply for a scholarship.

“Each year, my family and I go through and see who sticks out to us the most based on Kaiden’s values and his morals, and how he wasn’t afraid to stand out from the crowd and be his own person, and we present them at the scholarship awards ceremony,” Estling said.

“Obviously, this year was a little different,” Estling said as this year’s Senior Awards ceremony was not held live owing to precautions against spreading the COVID-19 pandemic. The senior awards in the graduation program were published in the Daily Register.

“My goal is to eventually have enough so that when the class of 2022 graduates, any of Kaiden’s classmates who want to go to college can have a scholarship,” Estling said.