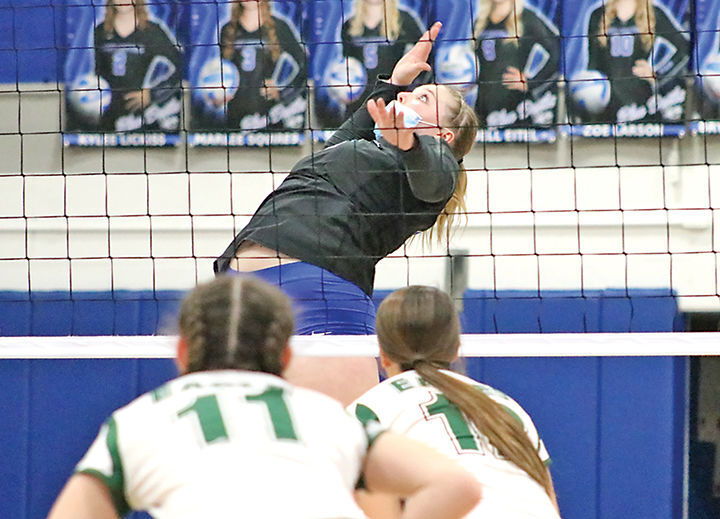 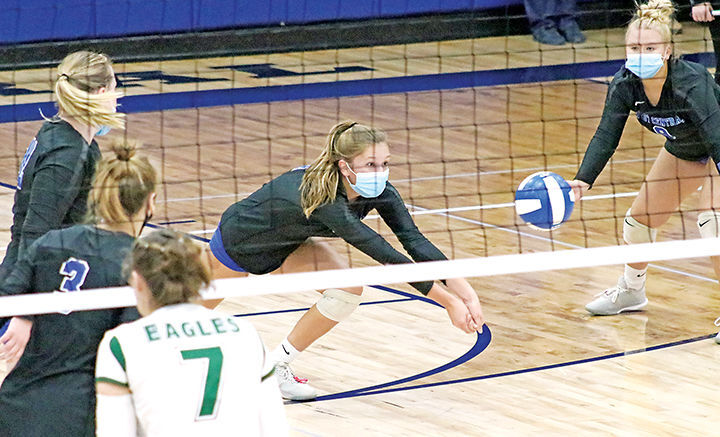 West Central’s Abby Squires tries to save a volley Thursday night at home against Clayton Ridge.

West Central’s Abby Squires tries to save a volley Thursday night at home against Clayton Ridge.

MAYNARD — An airborne Bryleigh Rouse intercepts the volleyball headed back across the net and sweeps it to her right. It drops to the Klinge Gymnasium floor as the winning point for set 1 Thursday night against Clayton Ridge.

Thirty-nine serves later, Rouse corrals one more from the Eagles, sending it over to Marlee Squires. She pops it back in the air high enough for her sister, Abby, to spike it past a twisting Eagle and into a corner. Set 2 is won.

In the third set, Emma Michels gets beneath an Eagles serve and bumps it to the front line. Abby Squires bumps it up to a leaping Aaliyah Gordon who smashes the ball toward a pair of Clayton Ridge blockers. They stop it, but not enough.

The ball ricochets on an arc, dropping out of bounds.The Upper Iowa Conference championship belongs solely to the 2020 Blue Devils. The last time West Central won a conference title was 1995, but it was a co-championship. They won it outright last in 1990.

“I just can’t be any more proud,” said West Central head Coach Abby DeGroot. “They just worked their tails off all the time. It really proved it.”

“We took down a good team in three, so I couldn’t be anymore happy and proud of them,” DeGroot said.

Marlee Squires set up 30 of the team’s 32 assists over the three sets. Zoe Larson added two.

Gordon, Rouse and Marlee Squires each had nine kills, while Abby Squires and Sidney Heimes each had five. Larson, again, added two, and Isabell Eitel had one.

On the serve, the Blue Devis had ten aces. Marlee Squires and Gordon each had three, followed by Abby Squires (2), Michels (1) and Rouse (1).

The championship has a family link for the coach.

“The 1990 team went undefeated for (the) conference championship, and my mom was actually a senior that year on this team,” she said. “So it kind of comes full circle.”

Winning the conference was only one goal for the season. Their next goal is to get to state.

“One down and one to go,” De Groot said.

They have the attitude to get it done.

“It’s taken a while to get that winning mentality down and I think these girls really have done that,” De Groot said.

UP NEXT: West Central will host Don Bosco (10-17) at 7 p.m. on Monday in the Class 1A Region 6 first round. The winner moves on to play Wapsie Valley in Fairbank at 7 p.m. Wednesday.

Showers with a possible thunderstorm in the evening, then variable clouds overnight with still a chance of showers. Low 34F. Winds NNW at 15 to 25 mph. Chance of rain 100%.