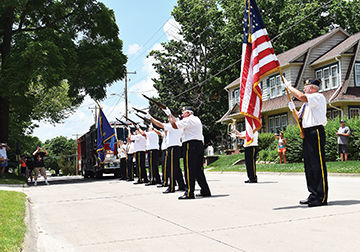 The Oelwein Post 9 Honor Guard conducts the volley and the Fire Department brings up the end of the wave parade for Royce King on the part of local officials although friends continued to drive by. 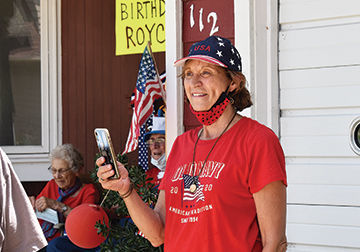 Royce King salutes as his wife Frankie looks on during a drive-by wave party held amid the novel coronavirus pandemic as the World War II pilot turned 97 on Thursday, July 2.

The Oelwein Post 9 Honor Guard conducts the volley and the Fire Department brings up the end of the wave parade for Royce King on the part of local officials although friends continued to drive by.

Royce King, 97, would have loved to shake hands with all the well-wishers at his drive-by birthday party on Thursday, July 2, according to his daughter, Sue (King) Bilodeau.

But owing to the novel coronavirus pandemic, the retired Oelwein King Implement Co. co-owner, World War II cargo pilot who shuttled over the Himalayan Mountains, former Oelwein Community Schools employee, husband of 75 years and father, had to make do with lots of waving.

The Honor Guard, which is composed of legionnaires, Veterans of Foreign Wars, and Sons of the American Legion, along with Auxiliary, joined the surprise drive-by party at the request of Oelwein Police Chief Jeremy Logan, said Past Cmdr. Jake Blitsch. After the Honor Guard conducted the volley, Oelwein Fire Department brought up the end of the official parade, as friends continued to drive by.

King served 41 years of active duty and active reserves time and has been “very, very active” in the American Legion for some 50 years, Blitsch said. “We owe him a debt of gratitude. He’s 97 years old and we hope he sticks around for a lot longer.”

Their children, Jim King of Davenport and Susan Bilodeau of Chico, Calif., also attended his 97th birthday with family. Royce’s friends and fellow World War II veterans, Jerry Clayburn and Darwin Jack, watched the ceremonies from across the street.

“We’re losing a lot of them,” said Blitsch, who helps conduct military rites as part of the Honor Guard. He said Post 9 is conducting rites Friday at a private service for an Oelwein resident and U.S. Navy veteran.

“It doesn’t seem so long ago that we were running out of World War I vets and now there’s absolutely none,” Blitsch said. “So we cherish the ones we have and we hope this makes a wonderful birthday for him.”

King kept a journal for many years and from it, detailed his World War II experience flying U.S. Army Air Force planes over the Himalayan Mountains, in “Who Will Play The Violins.”

The memoir is available in the Oelwein Public Library along with chronicles he penned about International Harvester or its farm implements, King Bilodeau said.

The following is adapted from “Royce King- Aviator-extraordinaire!” an article Blitsch wrote based on King’s piloting memoir, that appeared in the June 17, 2015, Oelwein Daily Register.

After graduating from Oelwein High School in 1942, King studied at Iowa State University in Ames where he joined the Army Air Cadets as part of ROTC.

He began his active duty in February of 1943 and was accepted into the Army Air Corps flight training program. He trained piloting several types of aircraft and logged hundreds of hours shuttling military personnel around the states.

Eventually he was assigned to the 3rd Combat Cargo Squadron which took him to the China-Burma-India theater of the war.

Flying the “hump” was pilot slang for flying over the Himalayas between India and China. Because of the height of the mountains, the distance across, the adverse weather conditions, the instability of the cockpit instruments, the almost constant cloud cover and the extreme wind conditions, there were no routine flights on these transport missions.

These crew members flew the largest logistic operations in World War II, operating 24 hours a day with practically no navigational aids. From bases in India they flew thousands upon thousands of tons of supplies, passengers, military armament and other vital necessities to American, Chinese and British forces in Burma and China. Their operational flight routes ranged from 500 to 1,000 miles in length and took them over the highest mountains in the world, the Himalayan range, where the worst weather existed almost daily including violent thunderstorms, severe icing, monsoons and hurricane-type winds.

Sometimes the temperatures could vary from 80 degrees ground temp at departure to below freezing by the time the aircraft hit maximum altitude over the mountains. Ice often formed on the wings causing a yet another hazard for these anxious but skilled pilots. If the confrontation against Mother Nature wasn’t bad enough, add in the constant fear of Japanese ground assaults into the mix to liven up the journey.{div id=”i4c-dialogs-container”} {/div} {div id=”i4c-dialogs-container”} {/div}

Some clouds this evening will give way to mainly clear skies overnight. Low 49F. Winds NNE at 5 to 10 mph.