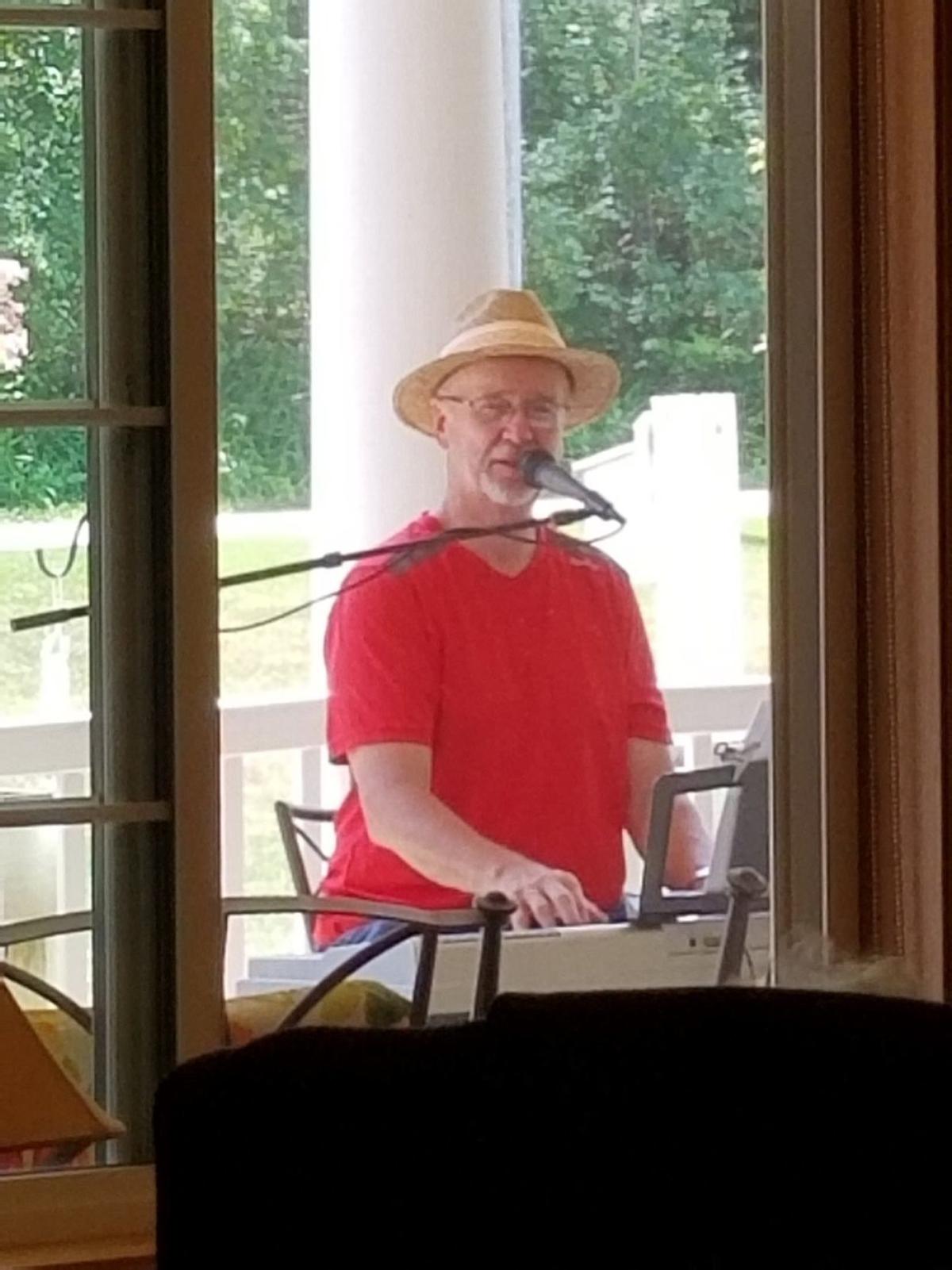 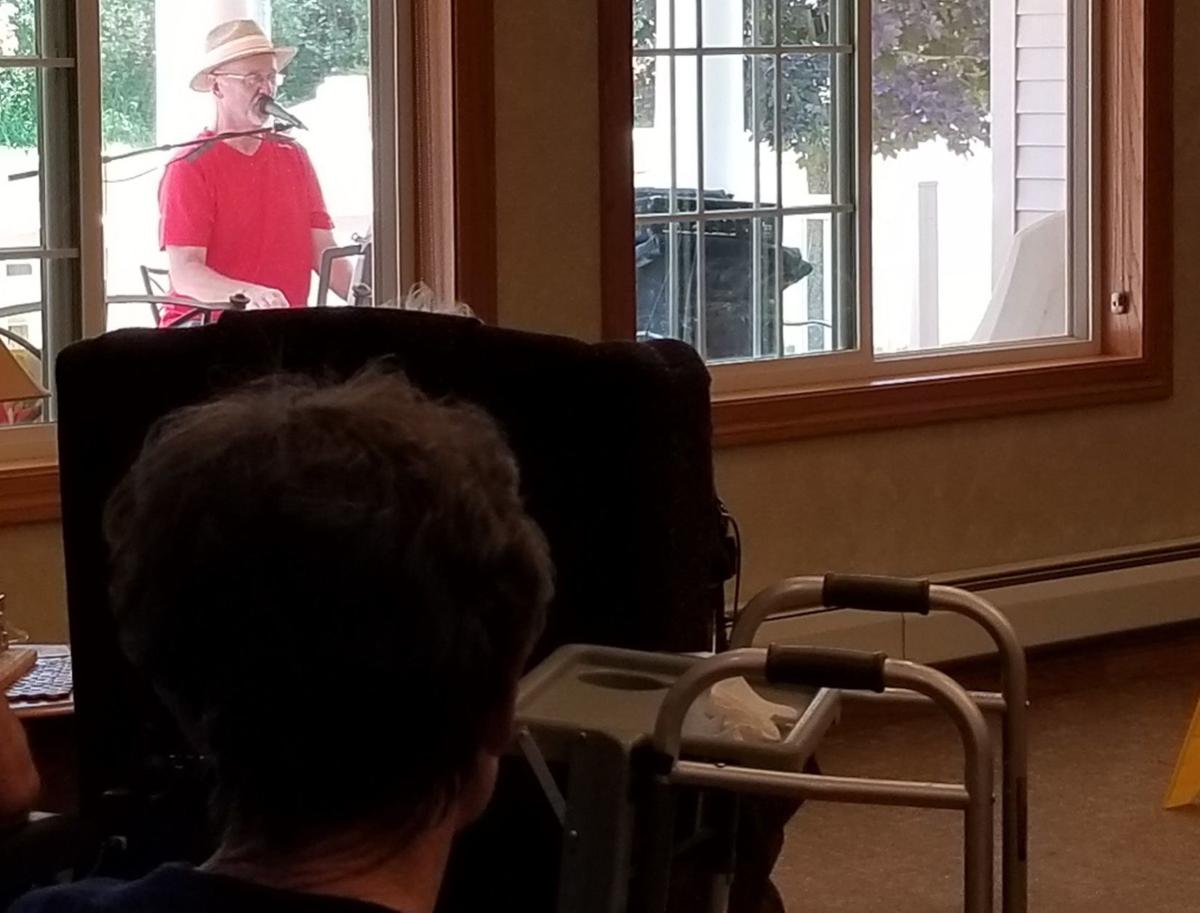 Those of a certain age from Oelwein may recall David Poggenklass, , who taught music for 33 years in Guttenberg. They did when he played for residents of Arlington Place Assisted Living and Memory Care in Oelwein last Monday, July 6.

“Since COVID we can’t have any entertainers in the building,” said life enrichment coordinator Shenita Barnes with Arlington Place. “They’ve missed having music come into the building.”

But with the pandemic it isn’t allowed, so they had to get creative.

“They were inside, I was outside,” Poggenklass said. “It was very hard to see them through the screens and windows. Shenita was inside. I did go up to the screens at the very end. Did see a couple of people I recognized, they thanked me for coming, they enjoyed it.

“I used to play there regularly but not anymore,” he said due to the pandemic.

“He’s from Oelwein originally,” Barnes said. “A lot of the residents know him (or) their kids knew him.”

Poggenklass is the only son of Francis “Frank” and Arlene (Cumberland) Poggenklass, he a railroad worker and she a schoolteacher who he knew as a homemaker.

While at Oelwein High School, he formed a band with classmates David Iverson and Chuck Franks covering 1950s and ‘60s rock, such as “the Beatles, Rolling Stones and Elvis.” He graduated with the Oelwein Class of 1971.

He later played with Pete Dougherty and His Band of Rhythm then co-founded The Four of Us.

Following a vocal music teaching bachelor’s degree from University of Northern Iowa in 1975 and credits in instrumental music, he taught music at Guttenberg for 33 years.

It benefits the residents to hear “oldies” music they know, Barnes said.

“It often sparks memories, they just know the words, it’s good cognitively,” she said. “They sometimes maybe can’t hold a complete conversation but they know, the long-term memory is there for the words to music often.”

“Before the COVID started,” said Poggenklass, referring to the pandemic that led to heightened precautions in Iowa care centers in early March, “I was playing 30 care centers and assisted living facilities a month.”

Then in early June, the hosting institutions got creative with activities.

“People called and invited me to perform outdoors,” Poggenklass said, noting he played five or six gigs in June. As of a Friday morning gig in Prairie Du Chien, Wisconsin, he hadn’t had to cancel for the weather.

On Sunday, July 12, he played for a lady’s 100th birthday party. “She will be inside and I will be outside,” he said. “She opens the window. Her family won’t be inside, they will come up to the window and say hi.

“That’s the way they have to handle it I guess.”

Poggenklass and his wife Barb were substitute teaching many years before retiring, which he did in 2008. They have three sons and six grandchildren.

Aside from piano, he plays the organ in church, and two or so decades back when teaching he learned to play several woodwind instruments so he could teach beginners.

After the high school group, Poggenklass played several years with a band from Elkader.

“Many probably danced to them,” he said: “Pete Dougherty and His Band of Rhythm.” This band played in northeast Iowa and neighboring states and appeared in West Union as early as 1947 according to Elgin Echo archives online. “When (Dougherty) retired he told me I should take over the band because I was the younger one.”

“My band was called The Four of Us, that was our name,” Poggenklass said. “We met at my mom and dad’s in Oelwien because we were from all over, and nobody could come up with a name. My dad said ‘How about The Four of Us? There’s four of you,’ and we looked at each other and said, ‘That’s good.’”

“We played big band style music, from the ‘40s and ‘50s, plus foxtrots, waltzes and polkas, for many dance clubs, birthday parties and gatherings.”

The Four of Us formed in 1978, co-founded by saxophonist John “Jack” Passick, a longtime Oelwein resident who stuck with the band for two decades, after having played with Pete Doughterty and His Band of Rhythm for many years, records show. The band’s pianist, Daisy Mae Reeder, was from Oelwein, he said, and worked as a music therapist at the Mental Health Institute. The bass guitarist was Leo Fritz of Hawkeye.