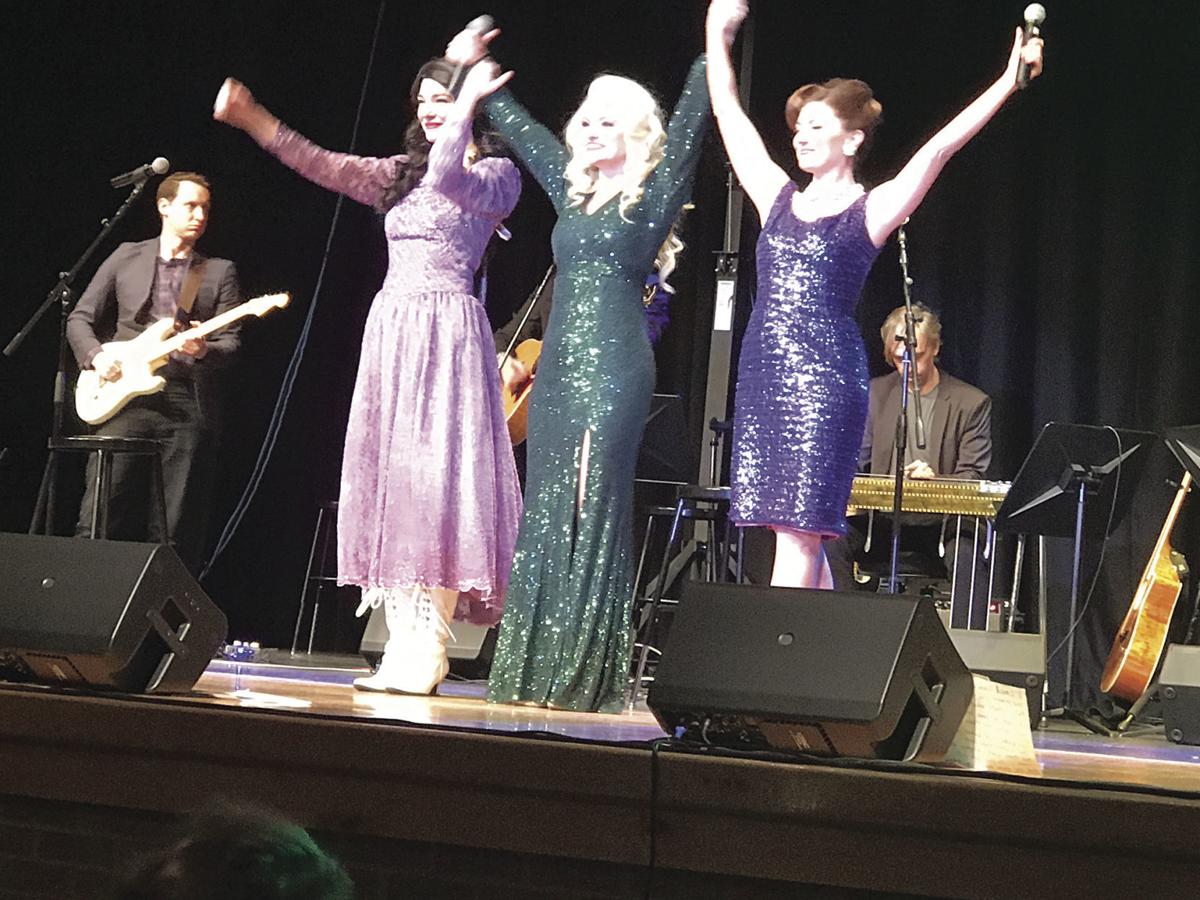 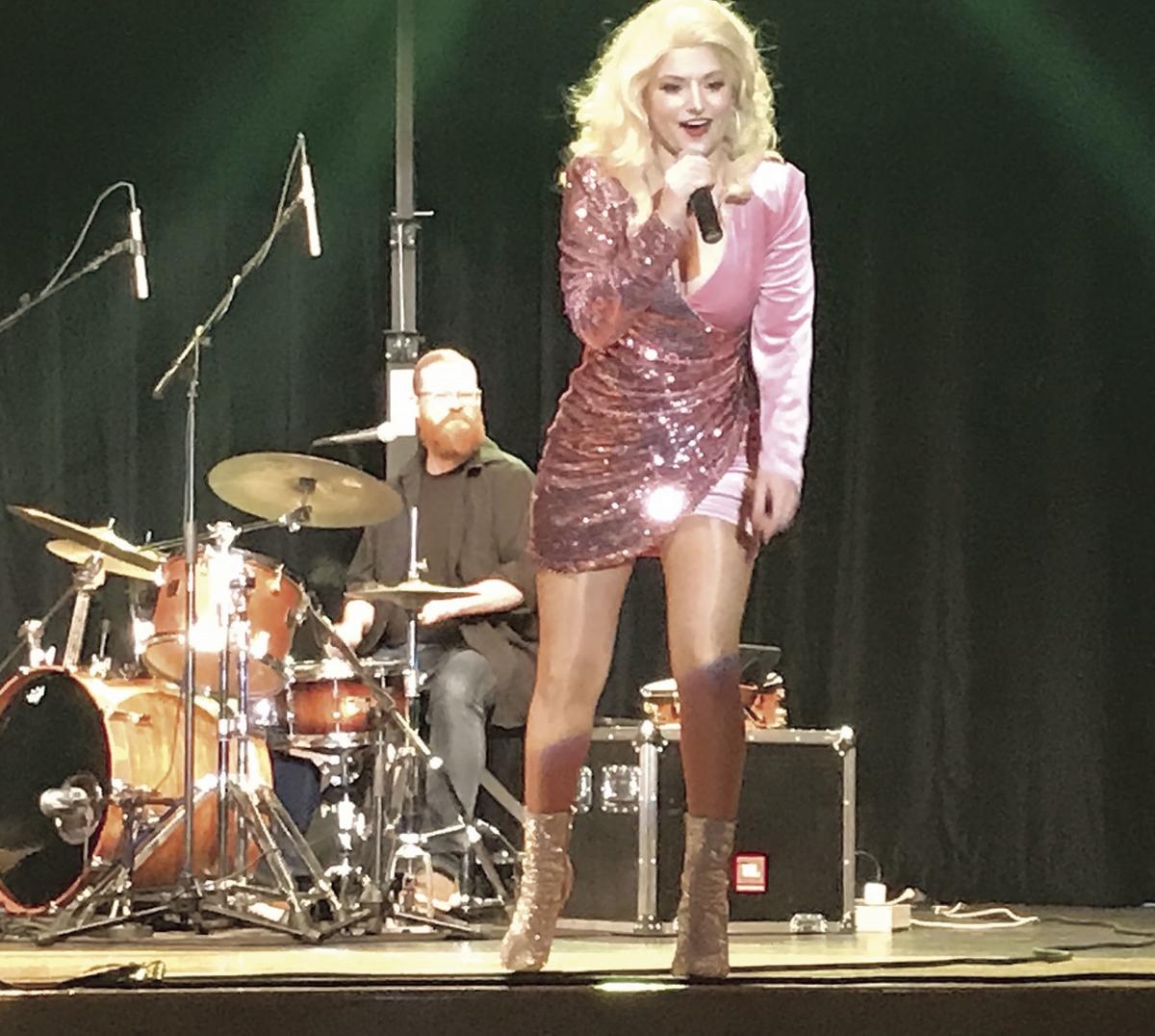 Nicole Kaplan Fenton as Dolly Parton interacts with members of the audience as the show gets underway. 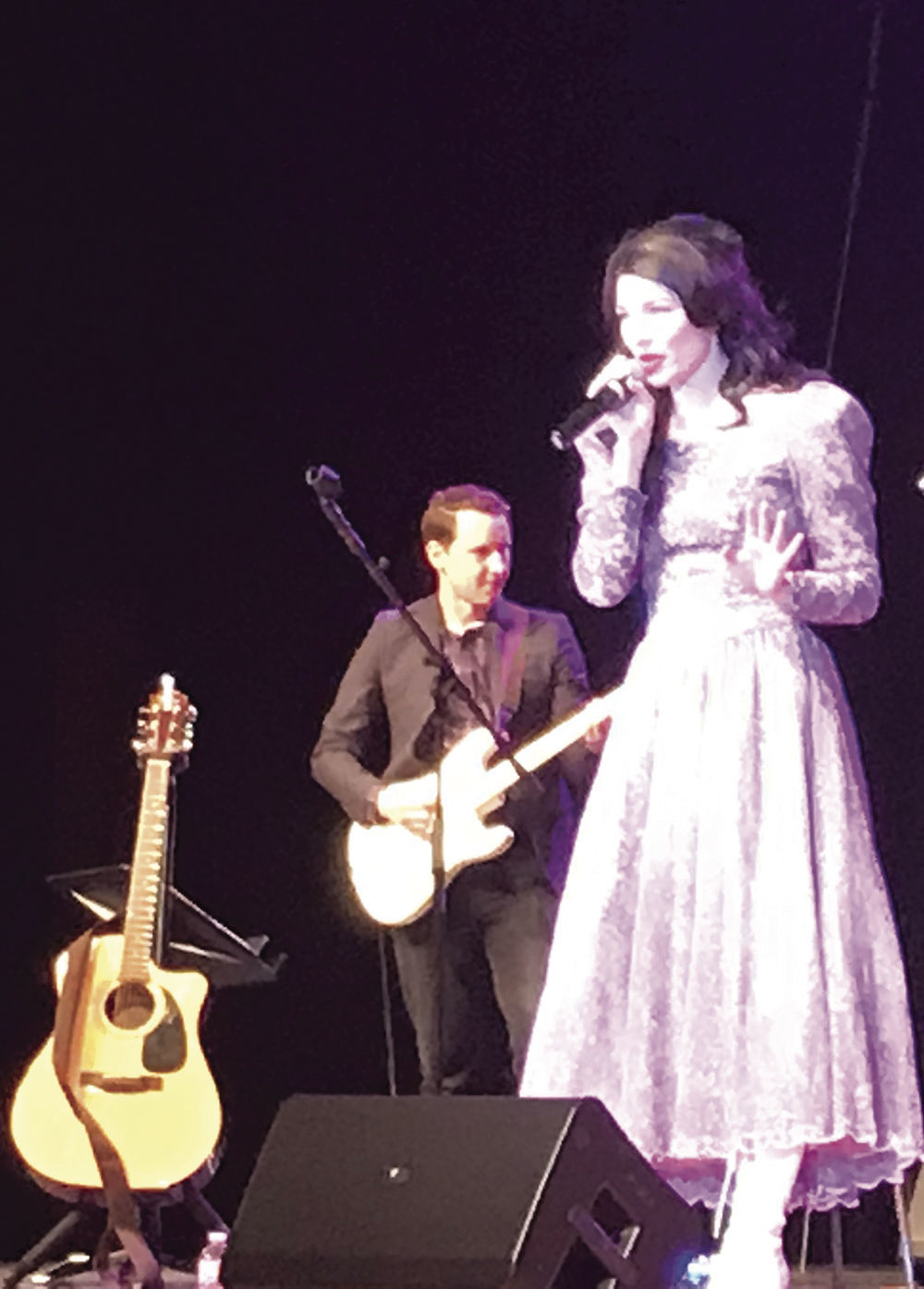 Kaylor Otwell performing as Loretta Lynn, sings the classic for which the singer is know, “Coal Miner’s Daughter.” 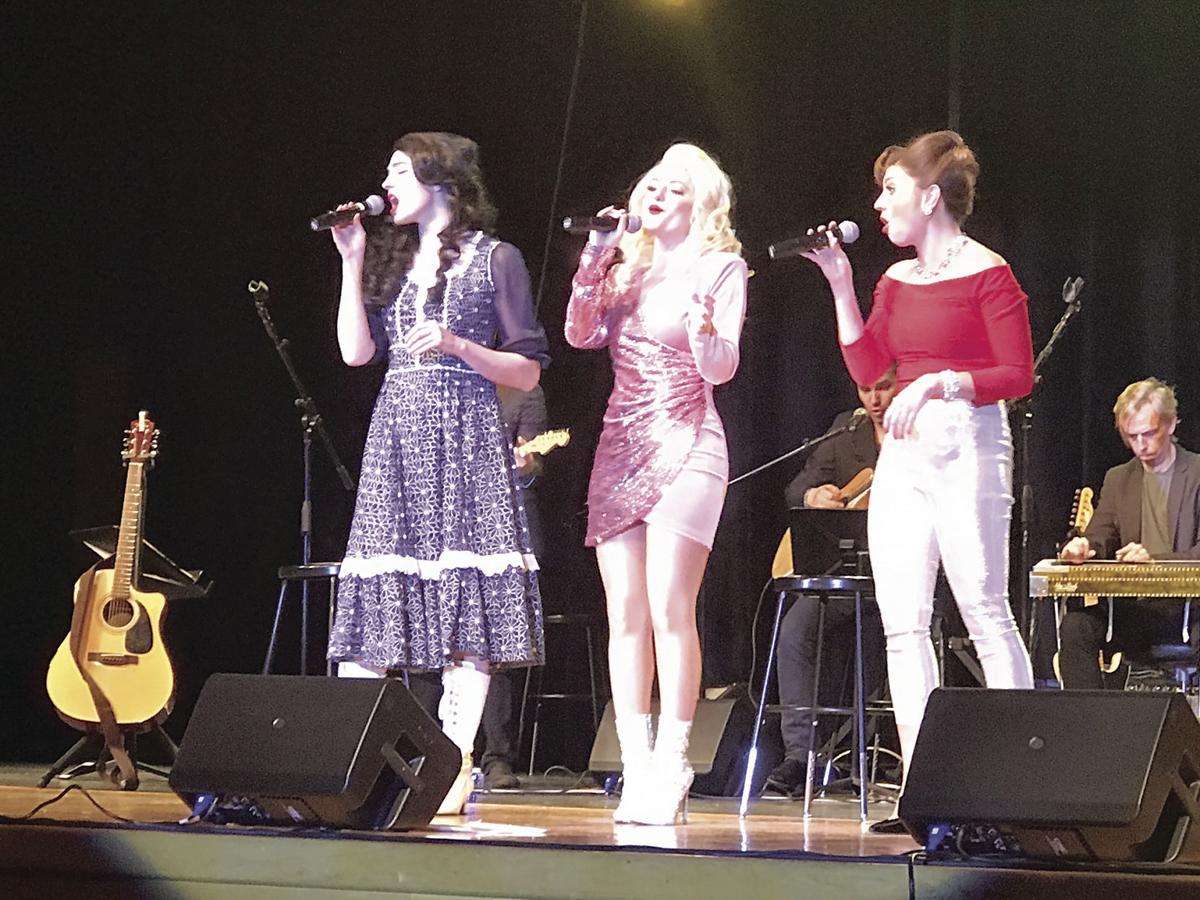 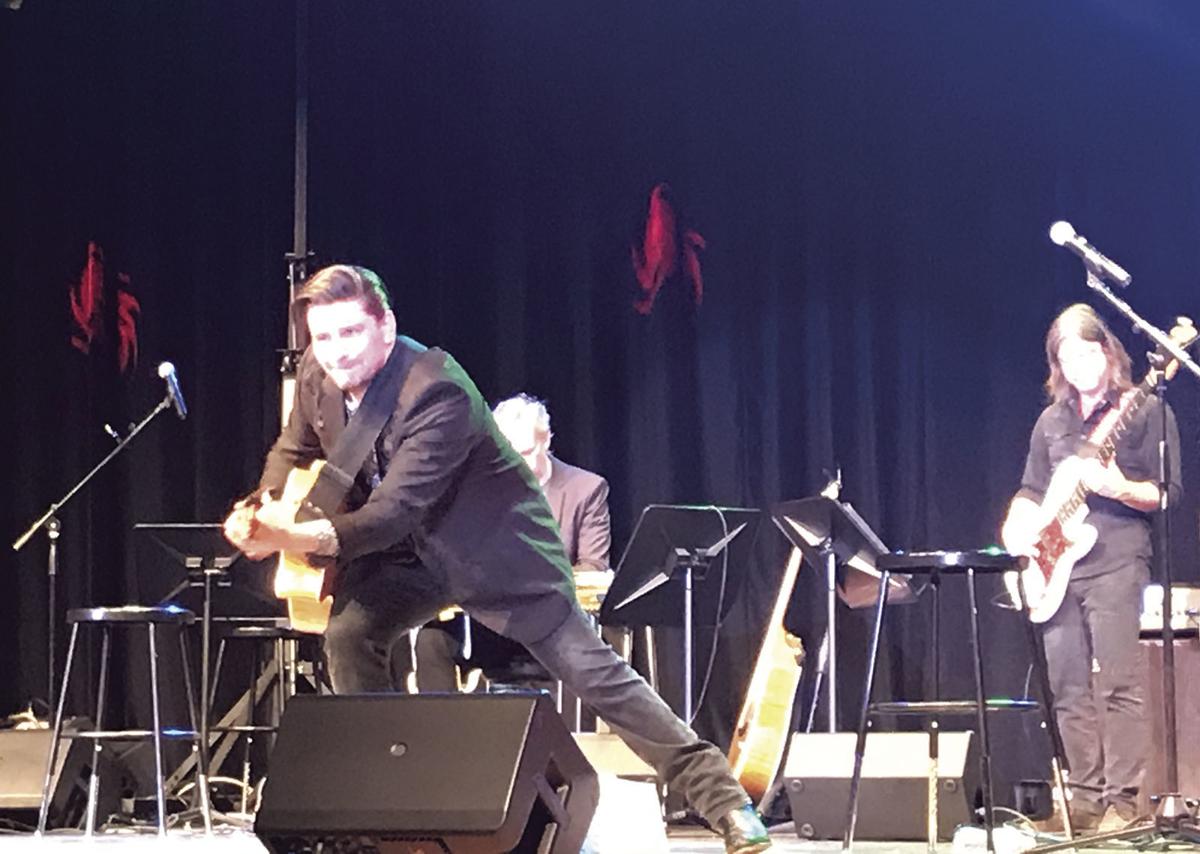 Nicole Kaplan Fenton as Dolly Parton interacts with members of the audience as the show gets underway.

Kaylor Otwell performing as Loretta Lynn, sings the classic for which the singer is know, “Coal Miner’s Daughter.”

It doesn’t seem to matter what your favorite choice of music is, from classical to rock, there’s always a country song that evokes a memory or place in time. It’s part of Americana. Nothing tells a story like a good old country song and everyone seems to identify with the signature songs and voices of Patsy Cline, Dolly Parton and Loretta Lynn.

A trio of very talented musicians, with a backup band to match, wowed the full house at the Williams Center for the Performing Arts Monday, with some of the most memorable songs of those legendary ladies of country music.

Darcy Wood as Patsy, Nicole Kaplan Fenton as Dolly, and Kaylor Otwell as Loretta brought not only their skilled vocals, but also their acting chops to the stage with very convincing mimicry of the distinctive voices and nuances of the famous country artists in their performances.

Darcy Wood as Patsy Cline, dressed in gold metallic capris and red off-shoulder sweater, looked the part of a singer from the 1950’s-early 60’s. Patsy always had a distinctive style that matched her voice. Wood had it all, from the guttural growl in

“If You’ve Got Leaving on Your Mind,” to the unique vocal cries and slides in “Crazy.” She brought the late legend to life before our eyes, and made us wonder about what could have been had Patsy’s life not been cut short in what would have undoubtedly been a very successful career.

Kaylor Otwell brought the shy Loretta Lynn out of her shell with “You Ain’t Woman Enough” and continued with “Fist City.” Loretta Lynn characteristically wrote songs about her everyday life and her, at times, turbulent marriage. She also wasn’t afraid to tackle issues of the day, which led into Otwell’s performance of “Don’t Come Home a Drinkin’.” With guitar in hand Otwell strummed and sang Loretta Lynn hits in the distinctive style of the country legend.

Nicole Kaplan Fenton brought the spunk of Dolly Parton to the stage, along with the glitzy wardrobe and style of the one-and-only legend. Joking with the audience about her outfit “makes me look cheap but I love it,” she bounced into “Dumb Blonde” followed by one of her standards, “Coat of Many Colors,” in which her co-hosts joined in with beautiful harmony. Next came “Jolene” and then the trio coaxing the audience into joining the chorus of “Islands In the Stream,” just before the break.

The band that performed with the ladies did an outstanding job of keeping the audience entertained while the singers changed for the second set. A special guitar duet was followed by rousing version of “Folsom Prison Blues,” before the ladies returned to the stage in evening wear.

In addition to singing each of their own tribute tunes, the ladies paid homage to other legendary country ladies including Lynn Anderson “Rose Garden,” Jeannie C. Riley “Harper Valley PTA,” and Tammy Wynette “Stand By Your Man.”

Each of the ladies gave signature sendoffs to conclude the evening. Patsy Cline’s “Sweet Dreams,” was followed by Loretta Lynn’s “Coal Miner’s Daughter,” and Dolly Parton’s “I Will Always Love You,” capped off an evening of outstanding entertainment at the Williams Center. A standing ovation brought on an encore performance of the three singing “9 to 5,” which put a little extra bounce in everyone’s step as they left the center Monday night.

The next performance coming up Monday, March 16 at 7 p.m. will be The McCartney Years, featuring the music of Paul McCartney. All adult tickets are $25 per person in advance and $30 at the door. Oelwein and Sacred Heart students are admitted free. Tickets are available at the OCAD office, 6 South Frederick Ave., and at the Williams Wellness Center desk. Online tickets can be ordered at www.williamscenterforthearts.com.