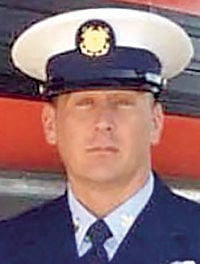 The Mississippi River has existed forever, it seems. The Chippewa Indians referred to it as the “Gathering of Waters.” It has now gathered a native of Oelwein to its shores in Dubuque.

“I always wanted to come back home,” said Link regarding his good fortune to be stationed in Dubuque in 2019.

Link had been scheduled to speak at the annual Memorial Day ceremonies here in Oelwein. The COVID-19 pandemic forced the cancelation of those observances.

Each year thousands of tugs and barges containing agricultural products, coal and other cargoes traverse the Mississippi River to freighters in the New Orleans area waiting to be loaded. The U.S. Coast Guard ensures that these tugs and barges complete their journey safely.

“Our primary mission is to maintain the aids to navigation on the river,” said Link.

Most of the public is familiar with the Coast Guard’s search-and-rescue missions involving ships and boats in distress off the nation’s coastal waters. Less known is the role it plays in maintaining the buoys and markers located on the nation’s interior rivers. The Wyaconda plies the waters between Clinton, Iowa, and St. Paul, Minnesota, in the never-ending task of maintaining and replacing buoys.

“The Army Corps of Engineers conducts dredging operations around the clock … we come after them and properly mark the channel” with the needed navigational aids, said Link.

When they are out on the river working, they put in long days.

“Sunrise to sunset … 15-hour days sometimes,” said Link. A run-up north to St. Paul may take anywhere from seven to 12 days to complete.

It is hard work but rewarding for Link and the crew of 17 coast guardsmen on board. He holds the position of executive petty officer among the all-enlisted crew. They know that operators of the commercial tugs pushing barges filled with valuable cargo depend on the channels being correctly marked. It is a huge responsibility.

The Coast Guard has allowed Link to travel extensively across the country to several duty stations during his career. These have included Florida, Michigan, Washington state and Alaska. His early years found him working in the law enforcement field before switching over to the maintenance of navigational aids.

He enjoyed the five years spent in Juneau, Alaska, particularly the availability of outdoor activities and opportunities to coach young people in sports.

One aspect of the service that he has found most enjoyable is the ongoing mentoring that he has received and that he now passes on to other subordinates under him.

“My master chief and first-class [petty officers] worked to give me my skills … I am now helping the next guy coming through,” said Link.

Link is not quite sure how the future will play out regarding how long he will remain in the Coast Guard. In 2022, the Dubuque assignment is scheduled to end. Presently, he is being screened for a possible Coast Guard cutter command of his own – a challenge he is excited to take on.

“My family has made a lot of sacrifices” in the course of his career, said Link. Balancing the needs of his family will figure heavily in any decision to stay on beyond the 20-year mark.