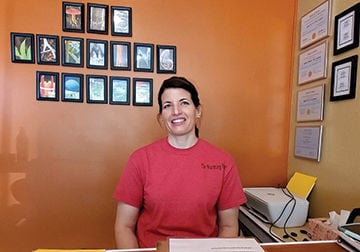 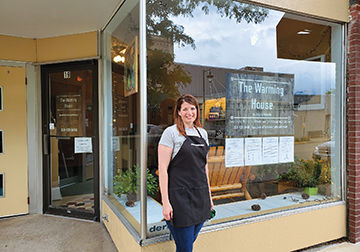 Although yoga, personal and small-group fitness classes are only one-tenth of what Angela Weepie now does at The Warming House — her massage therapy and spa business, with people itching to move after four months of emergency shutdown, then social distancing at the onset of the COVID-19 pandemic, it’s a growing part.

Weepie had been teaching fitness classes at the Williams Wellness Center until it shut down amid the COVID-19 pandemic.

“I did morning and evening classes,” Weepie said. “Because everything closed, now I’m back to just here and doing my own thing. The private and small group has picked up a little bit more because there aren’t (or weren’t) the large group options.”

Although the Wellness Center has now restarted three of its group classes; meanwhile in the months since the shutdown she shifted her focus to running The Warming House, which opened at 19 S. Frederick Ave. in June 2018.

“I had worked at big spas in the Waterloo-Cedar Falls area and worked for other people, and thought gosh it’d just be nice to have my own business so I can combine all the things I do and be my own boss, do my own thing,” she said, plus return to the area. “So I have just been loving it,” she added with a characteristic hearty laugh.

Weepie is not only a licensed massage therapist and esthetician (Capri College, Cedar Rapids) and nail tech (La James College, Waterloo), the 1996 Wapsie Valley graduate who holds a bachelor’s degree in earth science from the University of Northern Iowa is also a bit of a fitness buff with the ability to teach several styles.

Weepie said she and Vibes Up independent consultant Theresa Brown, who is also a licensed massage therapist and does energy work, will refer clients to one another based on the other’s niche.

It was at massage school that Weepie discovered yoga and sought more training.

Weepie is YogaFit certified at 200 hours, from Yoga Alliance approved master trainers and is working on her next 300-hour block toward its 500 hour certificate.

She has also put in the time to instruct in a variety of fitness styles. She can teach Eastern traditions such as tai chi to aid in stability and Western fitness styles from Turbo Kick to Piloxing Barre to various forms of Pilates.

Turbo Kick is a kickboxing cardio workout that uses large muscle groups. Piloxing Barre combines kickboxing with the workout of core and rotator muscles the body uses for stability. These muscles tend to be exercised in Pilates and ballet barre workouts. For those wanting more fine-tuning for stability and less cardio, there is “pop Pilates,” a sequential flow in a yoga style to a popular music soundtrack.

“I’m trained in traditional mat Pilates also, but pop Pilates is to traditional pop music and it’s a little bit more flowing on the mat which is super fun but also super challenging,” she said.

“Cardio (such as Turbo Kick) are generally bigger muscle groups whereas the fine tuning ones,” such as Piloxing Barre, Pilates and most yoga — power yoga aside, “are more stabilizing muscles — balancing ones. Anything that keeps you in alignment is more the stabilizing muscles and anything you need to move is generally what you work in a cardio type class.”

“Until now I’ve done everything as a large group and just yoga as private and small group, but you know, since we can’t really do anything else, I’m open to anything as far as the small group classes,” Weepie said.

Her extensive yoga training has included many tools for her toolbox: classes on coaching, movement science, the culture of yoga, ayurveda, personal training for athletes, and how to coach seniors, pregnant women and those sensitive to trauma.

“The trauma-sensitive one is pretty geared toward post-traumatic stress disorder too, so it’s also telling the instructor things you should let people know: Like if you’re in a room, some people want to be closer to the door, some people want to know what the sounds are going to be.”

“It used to be pretty common for an instructor to do manual adjustments on his students,” she said, and people don’t necessarily like that. It is becoming recognized that just pulling someone’s legs back unannounced, for instance, can psychologically trigger some students if they feel it takes their power away.

“So that’s something in classes they are gearing instructors more toward using your cueing to get the students into a version of the poses that fits their body,” she said. Instructors learn they don’t know necessarily what’s going on with a student. When before the trauma class, an instructor may have thought the student was not paying attention, the instructor learns to think with empathy because “maybe their back doesn’t bend that far.”

“So, in the end, anyone can be a yoga teacher but the more training you take, the more tools you have for your toolbox,” Weepie said.

Well before the pandemic, her spa training had taught her basic sanitation in accord with Iowa law. Such as: Laundry is dried hot all the way through the dryer. Any tools are washed with soap and water and disinfected in a hospital-grade virucidal agent as directed, rinsed and stored in a disinfected container. With the viral pandemic, she’s cleaning high-touch surfaces more such as doorknobs, and cleaning the restroom between clients.

She was already budgeting her time.

“The nice thing is, the salon and spa sanitation already was in place,” she said. “I always made sure I had time in between clients to make sure I could do all the necessary, so all the ‘bonus cleaning,’” with a laugh, “hasn’t been too rough because there’s all that time.”

Weepie is the daughter of Will Weepie of Fairbank and Denise Green now of Waterloo and is married to Oelwein area native Jeremy Schmitt, and they reside in the area.

For details, Weepie can be contacted at 319-429-9446 or found on Facebook @TheWarmingHouseOelwein.