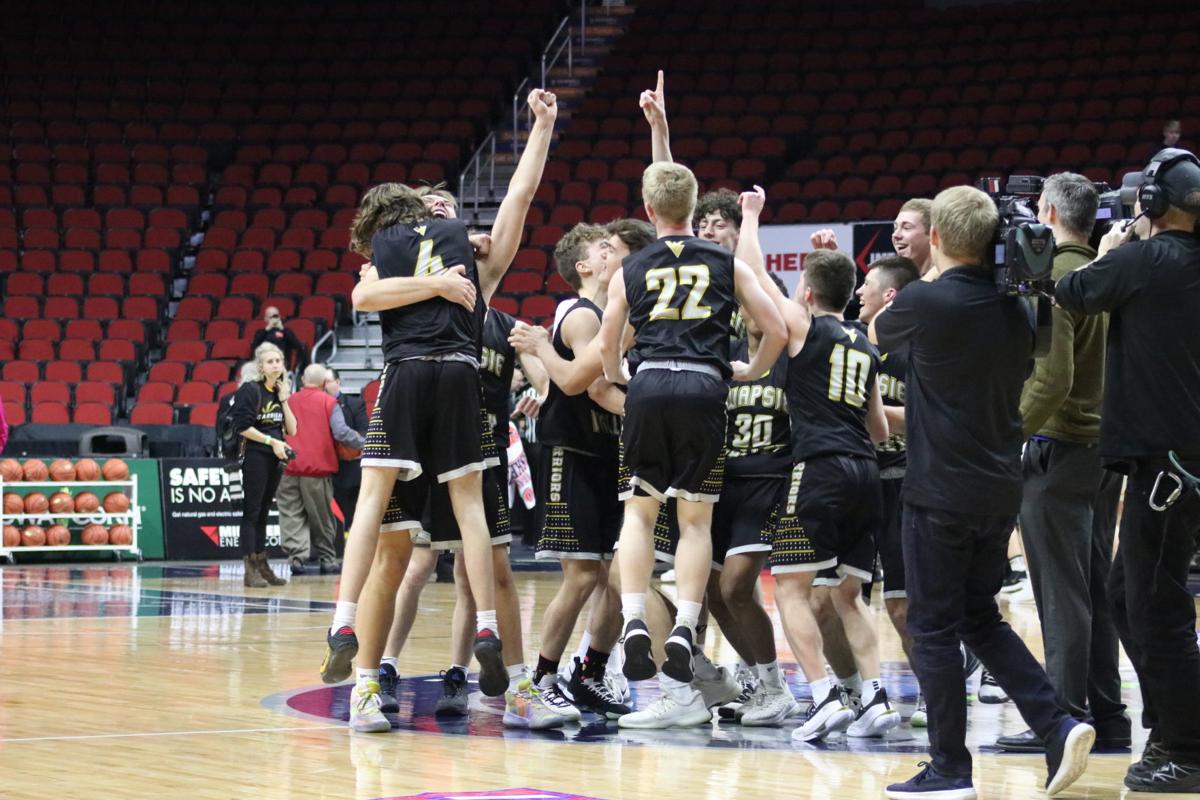 The Wapsie Valley Warriors celebrate in a mostly empty Wells Fargo Arena — because of COVID-19 virus concerns — after taking down No. 2 Bishop Garrigan 65-53 for their 1st State Championship in school history. 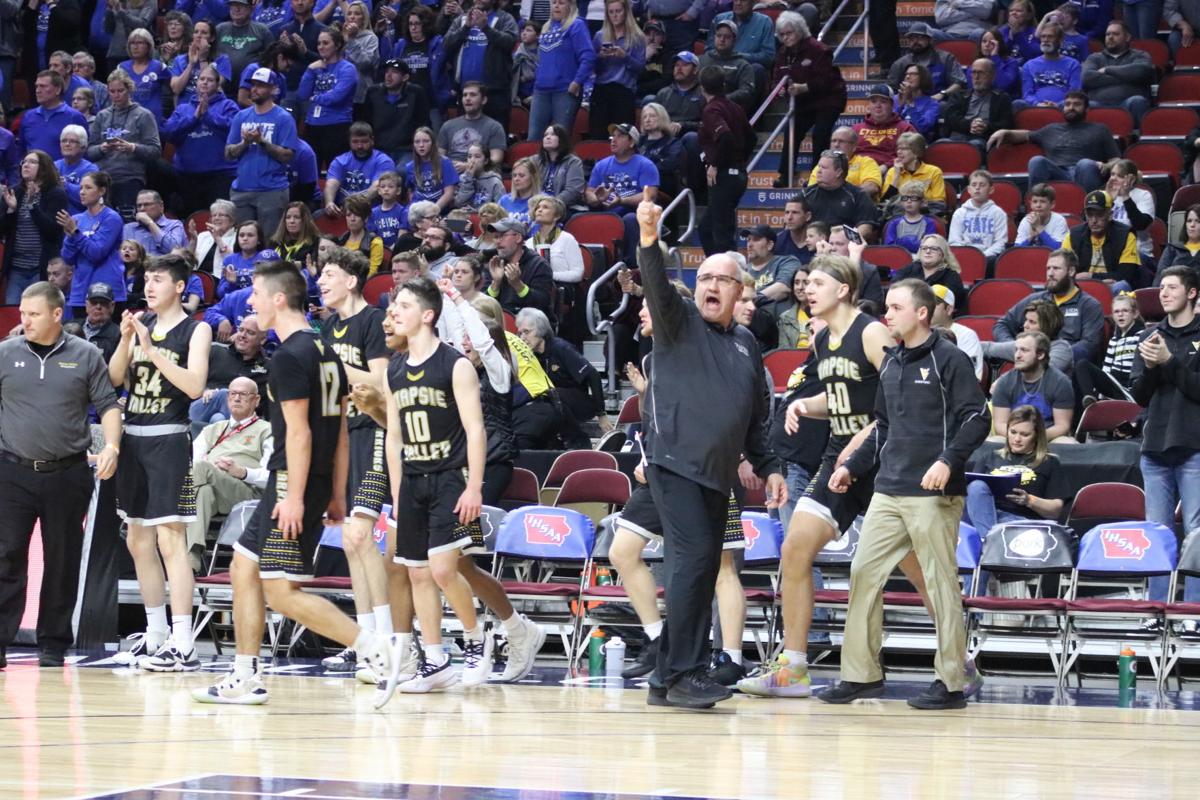 The Wapsie Valley Warriors celebrate in a mostly empty Wells Fargo Arena — because of COVID-19 virus concerns — after taking down No. 2 Bishop Garrigan 65-53 for their 1st State Championship in school history.

The last week has been a whirlwind for the State Champion Wapsie Valley Warriors, following upsetting the whole tournament to now having all the time in the world to reflect on the magical week in Des Moines.

“It’s kind of sunk in and I’ve rewatched each game twice already, and with our shutdown going on I’m sure I’ll watch them again,” head coach Marty McKowen said. “Not only have I rewatched those, but just living through the emotions that we had in all of those games.”

Emotions were at an all-time high after taking down No. 1 Lake Mills, No. 4 Montezuma and No. 2 Bishop Garrigan to take home the first State Championship in Wapsie Valley history.

“The kids were so excited when we got back in the locker room — the jumping up and down, screaming and yelling was fantastic. Then when we got back to our district, both Fairbank and Readlyn did parades for us. Put us on the back of a trailer and drove us around town. Just the number of people that stood outside their houses cheering us on was unbelievable.”

The celebration for Coach McKowen was 37 years of coaching coming to a pinnacle. For the veteran coach, the post-game interview didn’t have all-time championship quotes like Kevin Garnett screaming “Anything is possible” and “Top of the World, Ma I made it.” Instead, McKowen was much more subdued, but still joyous from a dream coming true.

It was a dream that only those at Wapsie saw coming. From an outside perspective, the Warriors were coming into the tournament with the worst record at 18-7 among six other teams with only three losses and a five-loss Springville team. However, Wapsie went on a 15-2 stretch after a 3-5 start to the season, which is why they didn’t view themselves as the worst seed.

“We sat down when we were sitting at 3-5, just sat down with the kids and said, ‘Hey, we’re close to getting things done the right way.’ They made a couple adjustments and then all the sudden, boom, here we are getting it finished off.”

“Going into the state tournament nobody could foresee where we were going being an eighth seed. Our kids just took that to heart. They said right after the seeding came out that we expected to be an eighth seed. We thought people would put us there. Let’s go prove them wrong.”

That’s exactly what the Warriors did with a well-rounded team that had two players named to the Class 1A all-tournament team in sophomore forward Gunner Meyer and senior center Kiks Rosengarten. Junior guard Blayde Bellis stepped up big with 16 points in the championship game, matched by fellow junior guard Tyler Ott’s defensive intensity. Kobe Risse played the point, leading the Warriors as their floor general to round out the starting five.

“It hits it perfectly when people say complete team,” McKowen noted. “The thing about them that made them so successful is how unselfish they were as players.”

The unselfishness started with Risse, who dished out a game-high eight assists in the championship game with zero turnovers and 10 points.

The right person to get the ball to seemed to be Meyer, leading Wapsie in scoring against No. 1 Lake Mills with 19 points and 17 points at the hands of No. 4 Montezuma.

“Then on top of that how many threes he was able to knock down. His three-point percentage was so high (9-15, 60%) during the State Tournament. It was major for us.”

When teams played the 6-foot-4 forward Meyer tightly, that opened up the floor for Bellis to shoot and drive inside. Bellis was the Warriors second-leading scorer in the championship game with 16 points.

“Blayde was so important to us because if he was left open he was able to knock down that three-point shot throughout the tournament,” McKowen noted. “He just gave us another person people had to guard which makes Kiks [Rosengarten’s] job much easier.”

Where the Warriors really made their money was on the defensive end led by junior guard Tyler Ott. Ott held Lake Mills’ leading scorer to 11 points and held Trey Shearer of Montezuma, the second-leading scorer in Iowa (25.2 ppg), to 16 points.

“Several different people said they were most impressed by Ott’s ability to shut down the other team’s best player,” McKowen said. “You talk about the unselfishness that we had on our team — he put all his energy into making sure their best player couldn’t score. He was phenomenal. Without him we would struggle to shut teams down.”

Then there is the 6-foot-7 center Kiks Rosengarten, who led Wapsie in scoring all year with 19 ppg, along with 12.3 rebounds per game.

“If you go into the State Tournament and have a double-double in three straight games — you’re a dominant force,” McKowen said.

Rosengarten was one rebound shy of having a double-double in every tournament game, and stepped up in the championship game with 21 points and 15 rebounds.

Wapsie had as complete of a team as they come with Risse running the floor, Meyer and Bellis shooting the lights out, while Ott brought defensive intensity with Rosengarten dominating inside. For their championship pedigree, this group of Warriors will be remembered forever at Wapsie Valley.

“It’s going to be one of those things that 10 years from now, we’ll still be talking about,” McKowen said. “It’s one of the most impressive things that we’ve done here. I rank this so high and to be able to celebrate it with so many people that are reaching back out from former players to community members to staff members has been really cool.”

Intervals of clouds and sunshine. High around 50F. Winds WNW at 10 to 15 mph.