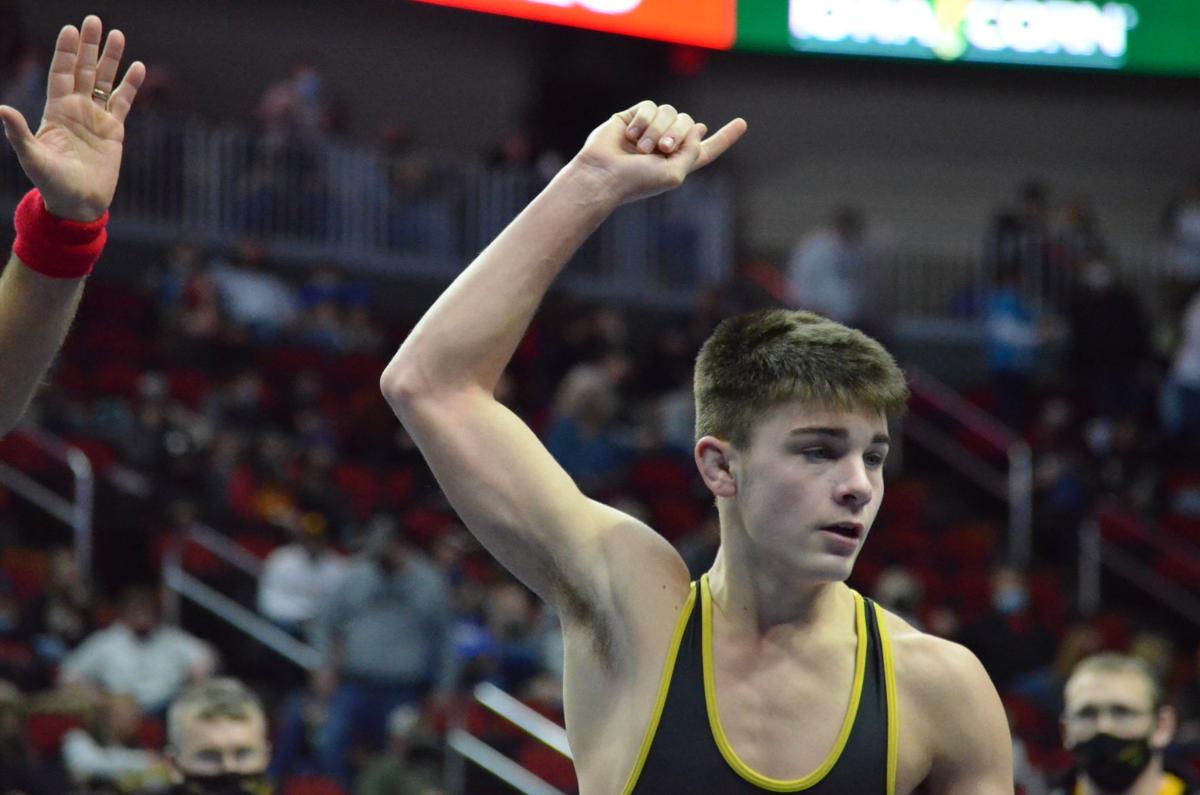 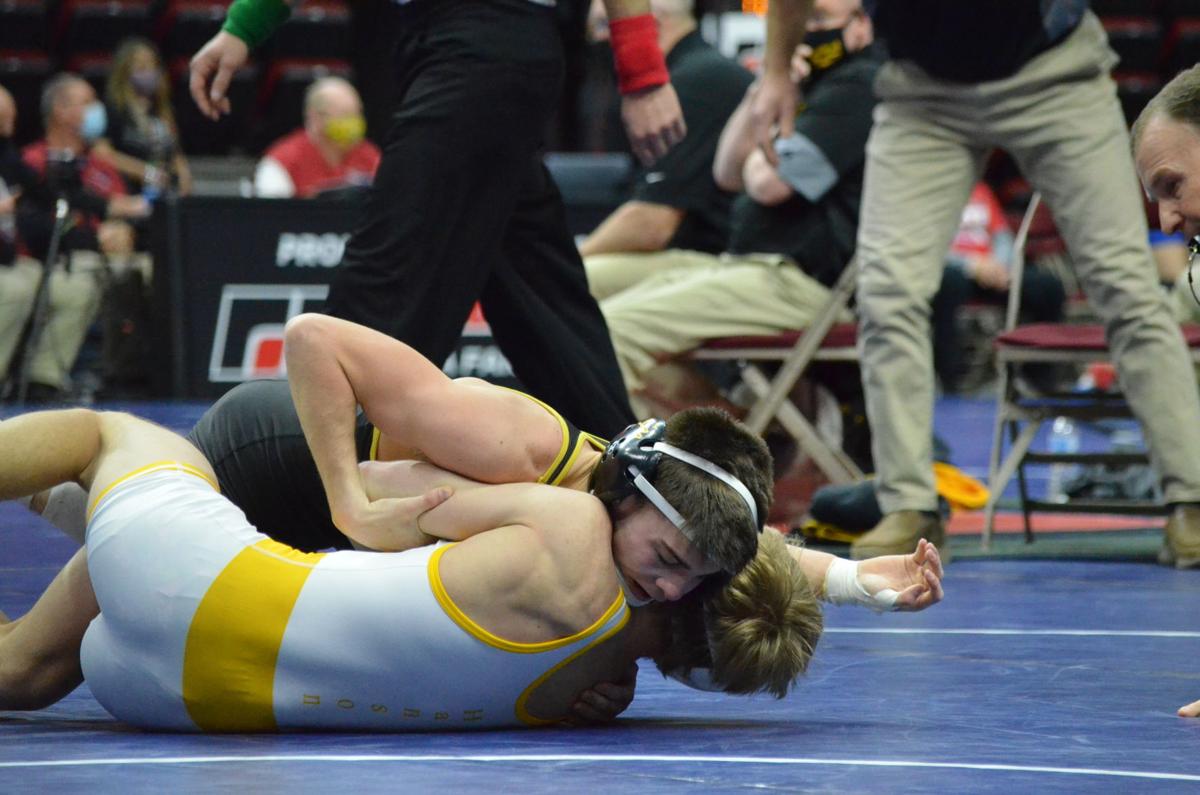 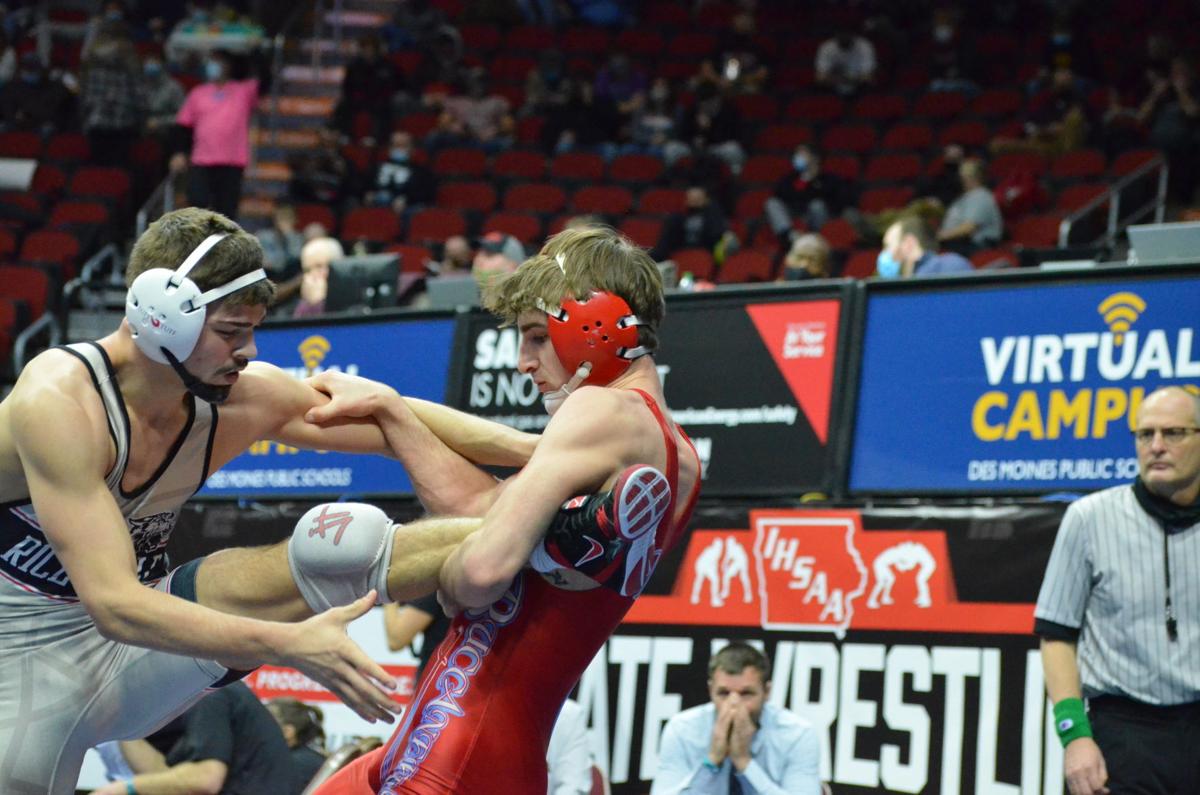 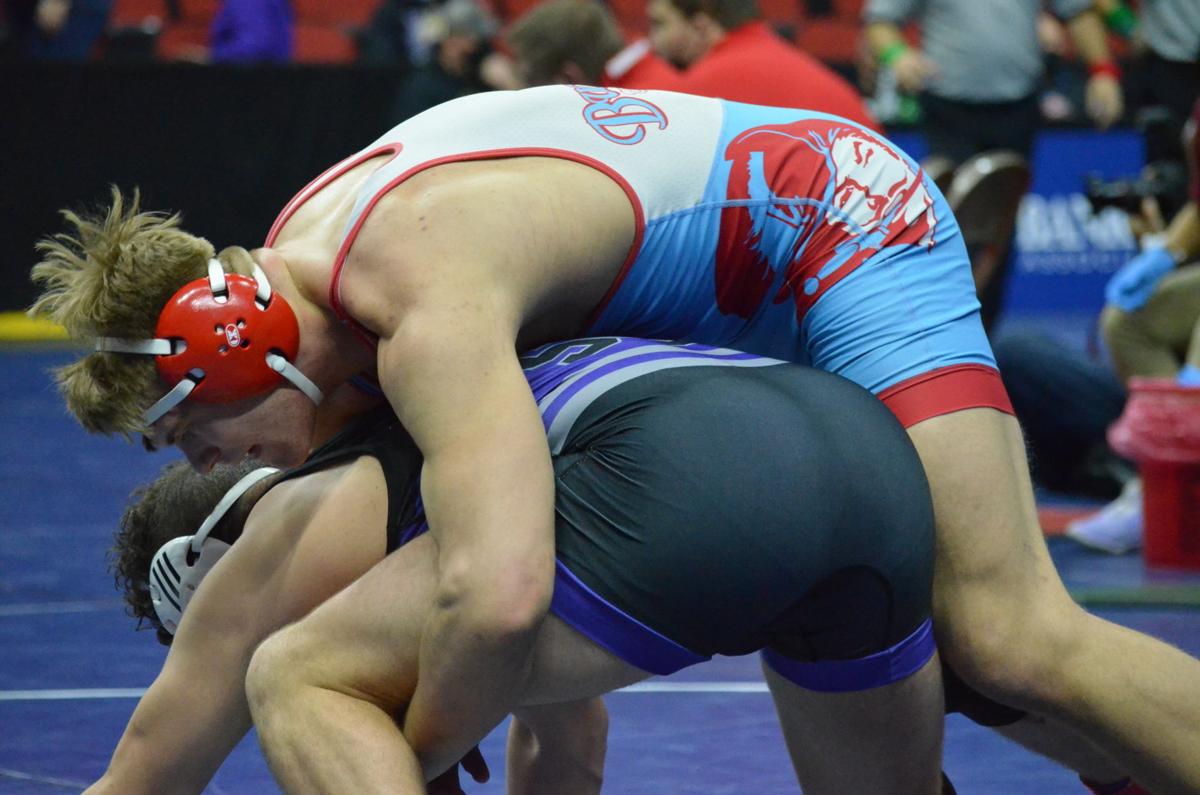 DES MOINES - A step up the ladder.

That’s all Dawson Schmit wanted after a Class 1A 113-pound semifinal loss Friday at Wells Fargo Arena. Wapsie Valley’s sophomore was fourth at 106 pounds last season and if he couldn’t walk out with a state championship, he wanted to end on a win.

Schmit did, claiming the bronze medal with a second-period pin of West Bend-Mallard’s Donavon Hanson. Hanson led the first period 4-0 on a takedown and a two-point nearfall, but Schmit (32-4) picked up two points on a reversal and angled for back points as the frame ended.

Warriors head coach Dany Adams noted Schmit has put himself in that position before.

“He’s so offensive (minded) kids score off his shots,” the coach said. “Dawson, even in the sectional and final, he’s been down a little bit but always ends up coming back and regrouping.

“He’s just so calm and cool about it, keeps things in check.”

As the second opened, Hanson choose to go neutral. Schmit earned a takedown 33 seconds into the period and quickly held on for the pin at 2 minutes, 38 seconds.

“I’m pretty excited that I did end up higher than last year,” Schmit said. “That was one of my goals.

“If you lose (before the title match), you have to go for the next best thing.”

Added Adams, “A two-time placewinner as a sophomore is always a good thing. He has a better feeling than last year with just winning that last match.

East Buchanan’s Luke Recker closed his career with his pin of South Central Calhoun’s Jayden Soard. A high-scoring affair led to a 5-all draw after four minutes, and Recker (42-4) earned an escape 10 seconds into the third period and a slim lead for the Buccaneers grappler.

Twenty seconds later, his football-style double-leg takedown of Soard gave him two more points. The three-time state participant turned it into a pin at 4:34.

“Gotta have something in you to do it,” Recker said. “I knew I had to get out and get another takedown (in the period). I guess that finish was one way to do it.”

Offered Buccaneers head coach Brent Lenox, “Luke Recker has been a staple here at the Well for the past three years and been a placewinner before. And he gets back on the podium, which is good.”

Freshman heavyweight Cody Fox (19-4) also went out with a win, claiming a pin of Underwood’s Easton Eledge in 1:11. Fox got a takedown 53 seconds in and maneuvered in for the pin seconds later.

“It’s bittersweet to see TJ and Luke wrestle their final matches, but in turn you have a freshman in Cody Fox who has a bright future,” Lenox said. “(Fox’s) freight-train double to the pin put an exclamation point on how high his ceiling is.”

Losee led 1-0 after a second-period escape. Lau (44-3) was on the bottom in the third and hit a reversal for the lead, but Losee picked up an escape with 44 seconds on the clock.

They stalemated through one overtime, and Losee rode Lau for 30 seconds to start double overtime. Lau needed a 30-second rideout, but Losee earned a reversal with six seconds left for the win.

“TJ Lau has put in a lot of time and wrestled super, super hard,” Lenox said. “Fourth place is nothing to be ashamed of in a tough bracket he had. He did everything he could, just a couple bumps.”

Wapsie Valley's Dawson Schmit warms up prior to his Class 1A 113-pound third-place match Saturday at Wells Fargo Arena.