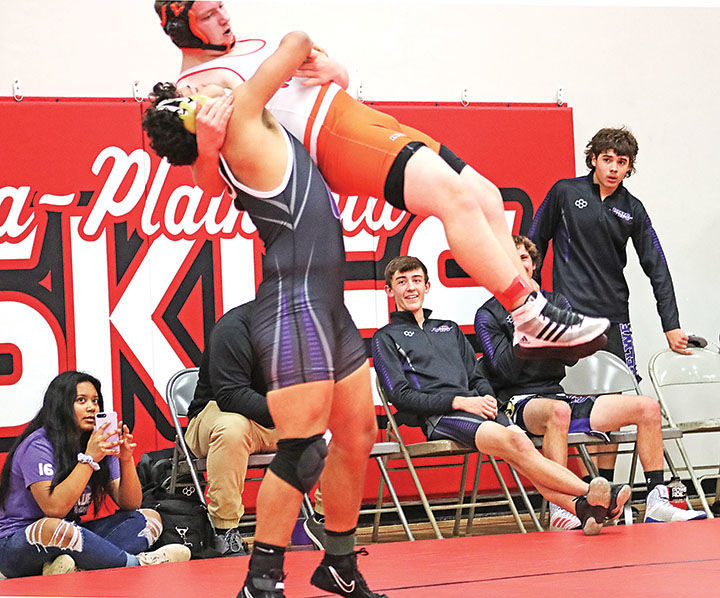 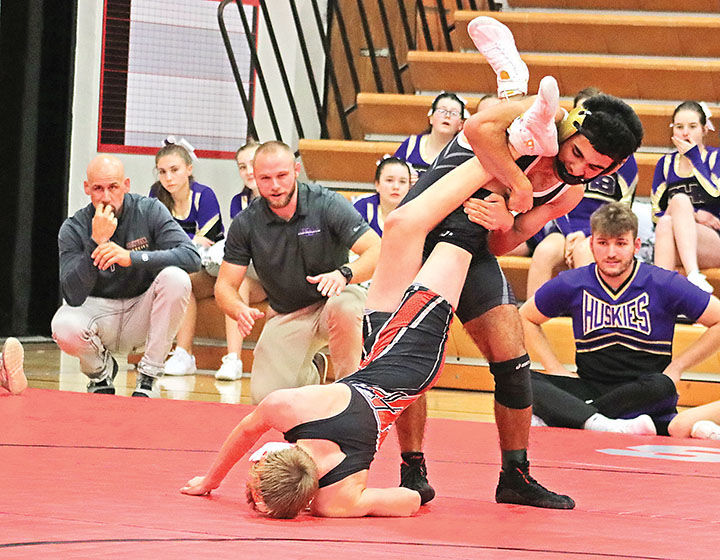 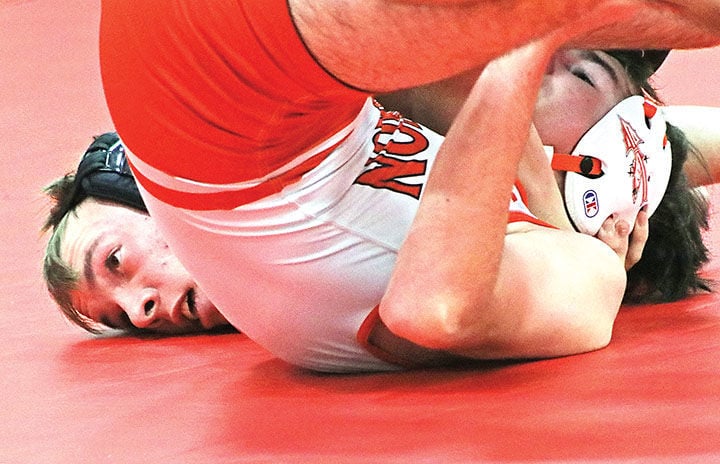 However, the quadrangular ended with the red pack of Huskies claiming the home mat victory over their purple brethren, 53-22. Nashua-Plainfield won all three of its dual matches.

“Some teams have definitely grown since last year,” he said.

“We have a lot of guys stepping into positions they’ve never filled before,” Bushaw said.

At 145, Leighton Patterson made his varsity debut by pinning Waukon’s Owen Frieden in 26 seconds and Postville’s Wilson Perez in 56 seconds.

“For him to come out as a sophomore and get two big pins that’s what we need to see,” Bushaw said.

Then against Nashua-Plainfield, Patterson pinned Michael Stille at 2:17.

For the new members of varsity, that is what coaches are teaching.

“So for them it’s getting out there and being comfortable with the fact that they can be aggressive ... We don’t want them to just hang on and try to win by three or four,” Bushaw said. “We want them to go get a fall, and so that’s what we are trying to teach right now and hitting the big moves.”

In its third dual of the night, Oelwein ran into what appears to be a resurgent Nashua-Plainfield team.

“(We) ran into a really tough Nashua-Plainfield that has kind of been taking its bumps the last few years, kind of like we are this year,” he said. “You know, we beat them I think by 40 points last year, they turn around and beat us by 30 this year.”

At 195, Oelwein’s Gage Voshell had one of the marquee matches of the night, after opening with a

major decision, 14-4, over Waukon’s Cullen Dickson, and receiving a forfeit from Postville.

“Gage Voshell had a great night,” Bushaw said. “He had a great match against Waukon (in his first match) and then wrestled a very good wrestler right there at the end from Nashua-Plainfied — a wrestler that wrestled at 220 last year and had a very good season, (and) cut down this year to 195.

“Gage came out right from the beginning, hit some big takedowns, had him on his back, won with a major decision, and that’s what we want to see.”

Also winning for Oelwein were:

• Carsen Jeanes at 126 with a 6-0 decision over Waukon’s Marcus Gibbs.

• Sojidin Gulmamadov at 132 with a, 11-1 major decision at over Waukon’s Owen Malone and a 7-2 decision over Postville’s Tony Marroquin.

• Christian Stoler at 285 with a pin at 3:01 of Nashua-Plainfield’s Landon Pratt.

Bushaw also credited Cooper Smock for a top performance. Against Postville’s Isaac Steffans, Smock faced “one of the better 220 pounders in the state in 1A ... and kept it close, ... that’s a tough match for him.

Oelwein’s next action will be at a multiple team tournament on Saturday at Wapsie Valley.