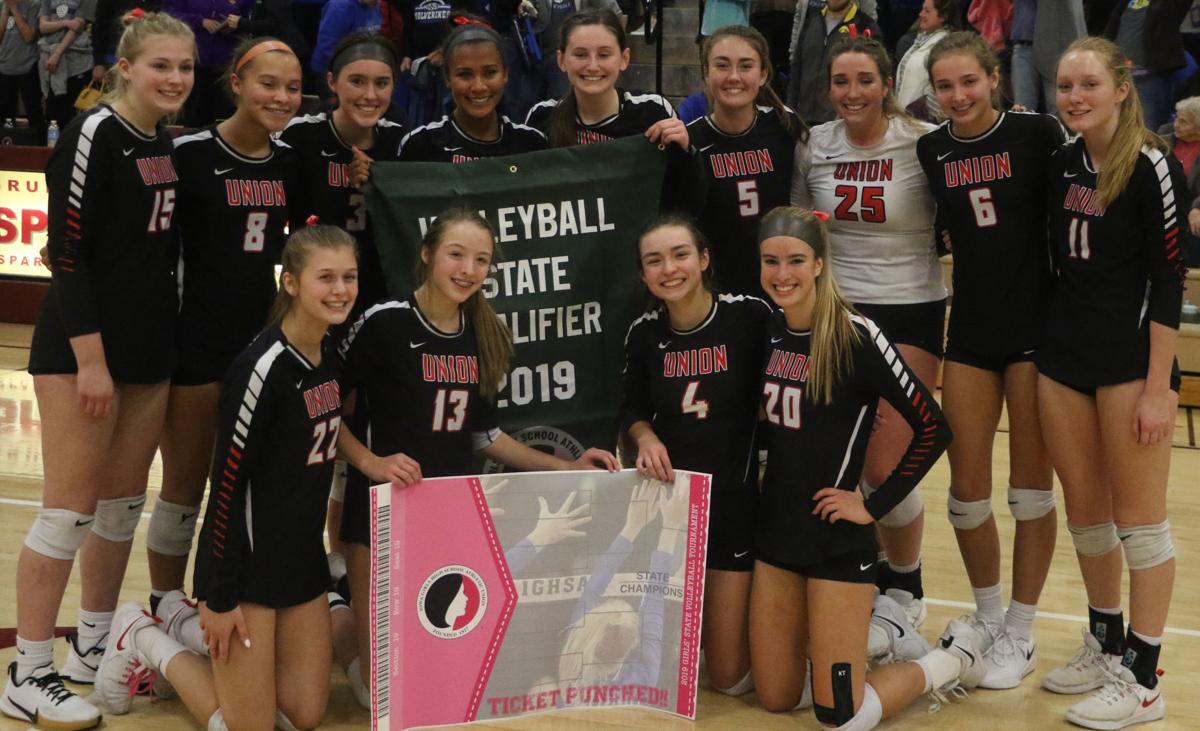 The 2019 Union volleyball team poses with its state qualifier banners after Monday’s 3-2 win over Dike-New Hartford. 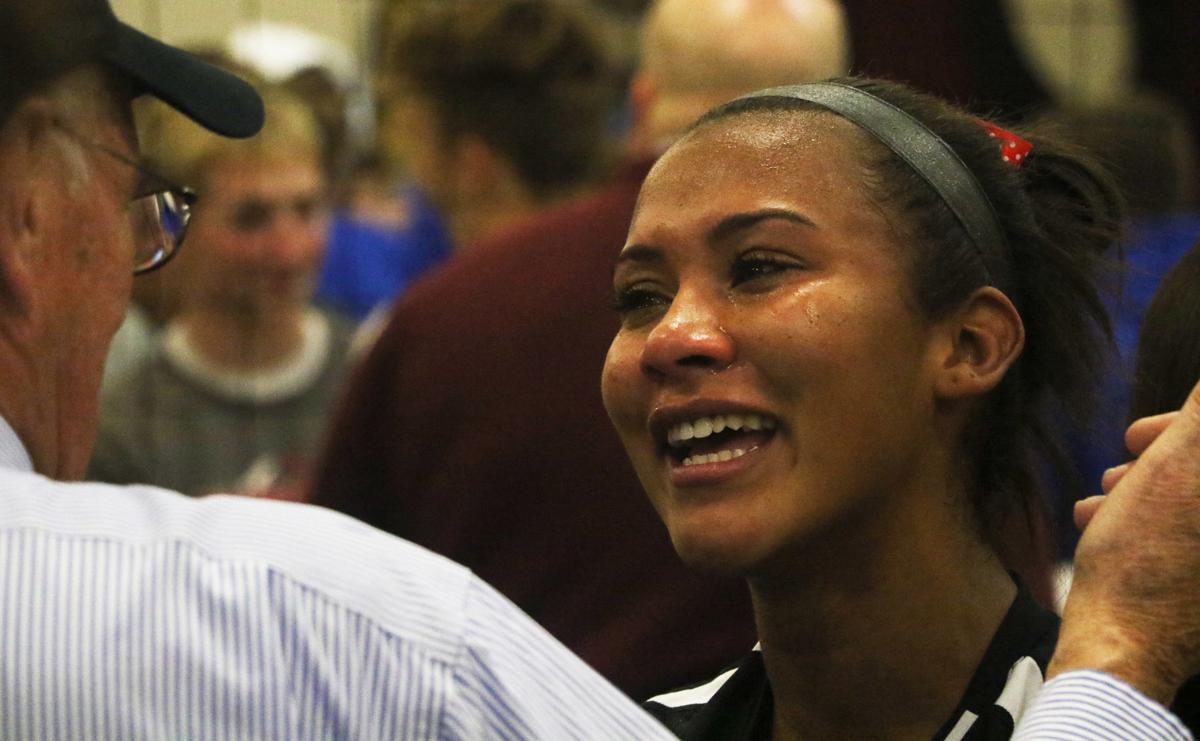 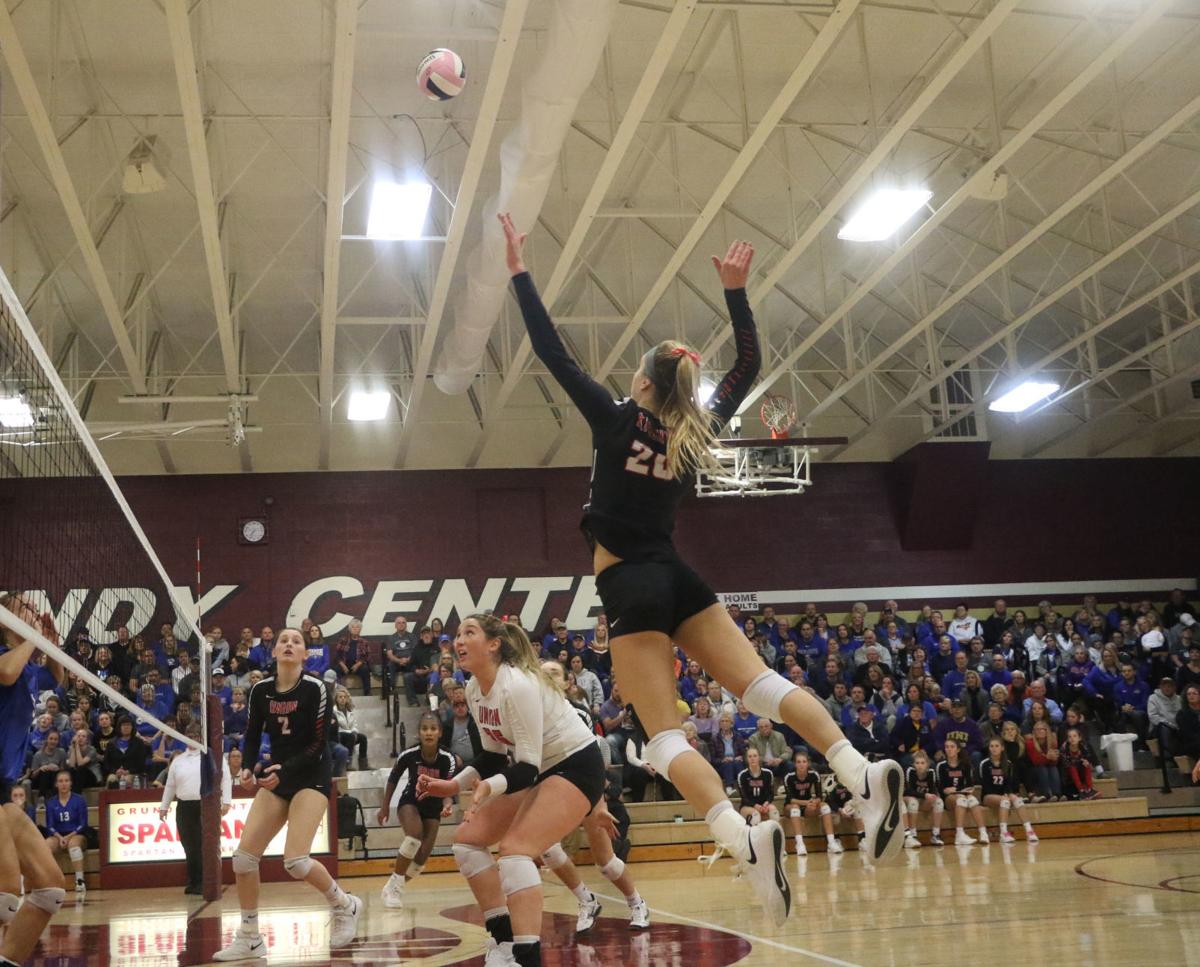 The 2019 Union volleyball team poses with its state qualifier banners after Monday’s 3-2 win over Dike-New Hartford.

Tears welled in Jasmyn Bush’s eyes as she collapsed to the hardwood. She had every reason to.

For one, the Union senior had been working overtime. She racked up 49 kill attempts throughout a grueling five-set match.

“The beginning of that fifth set, we were exhausted,” junior outside hitter Belle Weber said.

Bush also lives with asthma. Between the third and fourth sets, she gathered her inhaler and took several deep breaths from it. Her workload may have contributed to her having trouble breathing by the end of the two-hour-long match.  Like Weber, Bush’s 49 kill attempts were her second most on the year and speak to the workload the two outside hitters shared.

There was one other factor in Bush’s situation. She had just secured the team’s first appearance in the state tournament since she was a freshman with an emphatic kill down the middle of the opposing defense.

Bush took a few moments. After posing with the team’s state banner and hugging friends and family, she was driven to a local hospital to deal with her asthmatic symptoms. Union head coach Brian Jesse later confirmed Bush’s treatment was successful and that she’d been discharged from doctors’ care. Bush is the lone player on Union’s roster with state tournament experience, having lost to Dike-New Hartford in the 2016 championship match.

“I just really wanted her to get that chance to get back to state,” Jesse said. “I’m happy for her, because she’s had a great year. She stepped it up this year.”

All the while, a lower-than-normal ceiling at Grundy Center forced both sides to play more cautiously than they were accustomed. On at least a handful of occasions, the metal rafters redirected the flight of the ball, resulting in mad-dash scrambles for ricocheted hits.

“That was super impactful,” Winkelpleck said. “We’re used to a higher ceiling and not having to play ping pong with the ceiling all the time. We just have a lot of scrappy athletes that just don’t want the ball to hit the ground.”

Both teams were still adjusting to the low roof in the first set, which saw three plays directly impacted, and all three going in Union’s favor. The first came near the net on the Knights’ side when a ball fell from the rafters and bounced off of setter Allie Driscol’s head. Bush saw the deflection and drove a flying fist toward the trajectory of the ball, pushing it just over the net and saving the point to tie the set at 13 apiece.

The reactions Union’s players had to make – absorbing more impact from serves and kill attempts as to not hit them into the ceiling – resulted in some early errors. Jesse had to use his second timeout up 23-22 after a Dike-New Hartford serve careened off a Union defender and well into the Wolverines’ student section. However, junior outside hitter Lexi Nolan – third on the team in kills – put the set away and gave the Knights a 1-0 advantage.

“We were pretty pumped up, and we were tired, I would say, after the first set,” Weber said.

“The first set was extremely crucial because it gave all of us so much confidence going into the next set,” Winkelpleck said.

However, that confidence didn’t translate immediately in the second. The Knights fell behind 6-0 while they had trouble setting up their offense, triggering an early timeout. A pair of failed block attempts put Dike-New Hartford up 8-0 before Union finally got on the board.

But the Knights fought back. They put together consistent offensive possessions en route to a 10-6 run to put them back in contention and force a Wolverines timeout. Winkelpleck herself had a lot to do with the run, putting up a pair of serves that barely grazed the top of the net on the way to consecutive points. Union pulled to within one, down 16-15, before forcing its opponents to call their second timeout in seven plays.

Wolverines outside hitter Morgan Weber, the Wichita State commit and two-time All-State selection, got her game rolling at that moment. The senior outside hitter rattled off several kills in a row and put Dike-New Hartford ahead for good on its way to a 9-5 run to close out the second set.

The third set might’ve been the best Union has played all season with a bit of luck thrown in. The Knights started off with a 10-4 run thanks largely to feeding the ball to Belle and a few uncharacteristic serve-receive errors from the Wolverines. After taking a commanding 24-15 lead, what ensued was a minute-long rally of near misses and near-impossible saves. Both Winkelpleck and Driscol made diving digs to keep the play alive in the span of 15 seconds, with Driscol sliding to the net to save one more before Belle put the point and the set away with a lofted shot that landed just inside the near boundary.

The Knights held a brief lead in the fourth before the Wolverines took over from there. Belle Weber couldn’t get her kills attempts going midway through the set while other attempts started going long of the baseline. After an emphatic kill from Morgan Weber, the match went to the fifth.

The Wichita State commit’s offense didn’t stop there. In the final, deciding set, she started off with three consecutive points for Dike-New Hartford before Jesse called a crucial timeout. He said he had one simple message during his talk with his team.

“Just regroup, regroup,” Jesse said. “We just knew we had to get through [Morgan] Weber in the front row and keep it close.

“We had to stay aggressive.”

That’s when the Knights began to get into a rhythm. A more consistent offense put the Wolverines in awkward spots to defend, forcing a few errors and their first timeout after Union tied the set at eight apiece. Belle and Bush began to take control for the Knights even more as a block from Bush put her team up 12-9 and pushed Dike-New Hartford toward its final timeout.

Up 14-9 and on the cusp of a state tournament appearance, the Knights let a few points get away. A block from Morgan Weber gave the Wolverines their 11th point. Union decided now was the time. A sliding dig from Winkelpleck. A set from Driscol behind her head. A right-handed slam from Bush. The ball slipped between two Dike-New Hartford blockers. Two other defenders converged near its path. Neither could get there in time. The Knights dogpiled Bush before the ball took its second bounce.

The Knights (30-11) will look to continue their journey Wednesday morning when they square up against top-seeded Davenport Assumption (32-5) at 10 in the U.S. Cellular Center in Cedar Rapids. But for Winkelpleck, the not-so-simple act of helping her team to state competition was still overwhelming.

“I can’t even explain how I feel right now,” Winkelpleck said. “Nothing, I don’t think, is ever, ever going to top this moment in my high school career. I’ve been dreaming of this since I was in 5th-grade volleyball and going to AAU, and then playing beach. Just putting in all the extra work and going in in the summers when no one else is.

“It’s been my dream forever.”

Clouds and some sun this morning with more clouds for this afternoon. High around 35F. Winds SE at 5 to 10 mph.