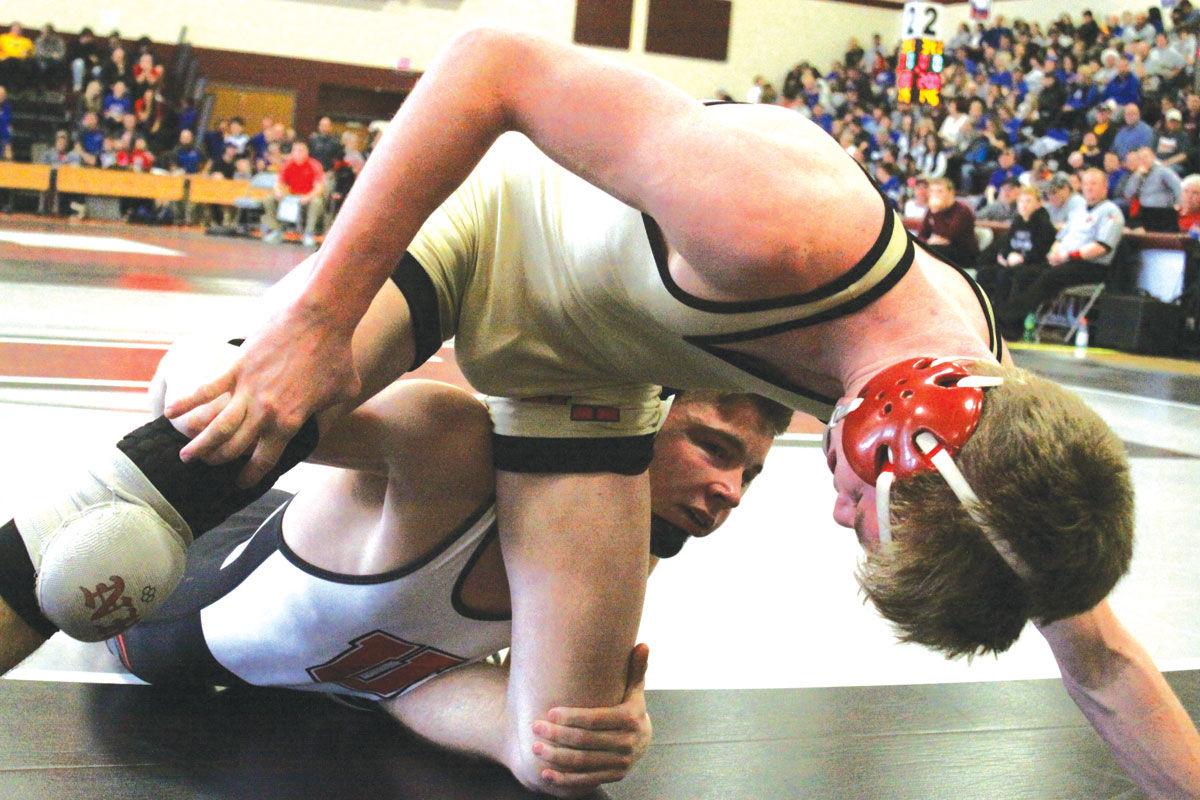 Peek-a-boo: On his way to the State Tournament again, No. 1 (138) Jack Thomsen of Union looks to improve upon his bronze medal finish from a season ago this year. 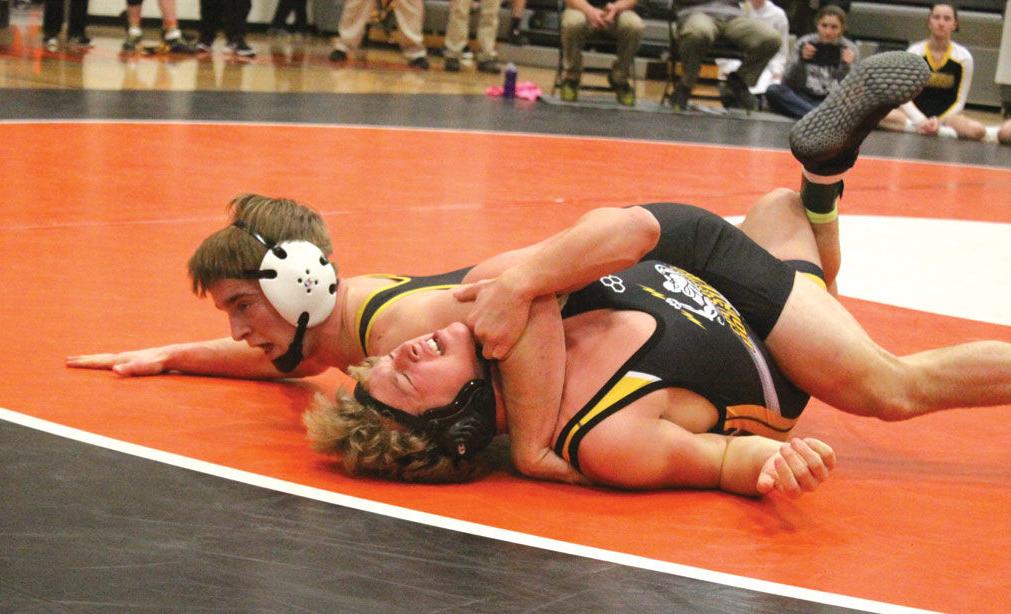 No. 5 (152) Scott Betterton (V-S) is shown competing at Sectionals on February 2nd. This past Saturday, Betterton earned win number 40 for his senior season, while also becoming a three-time State qualifier. 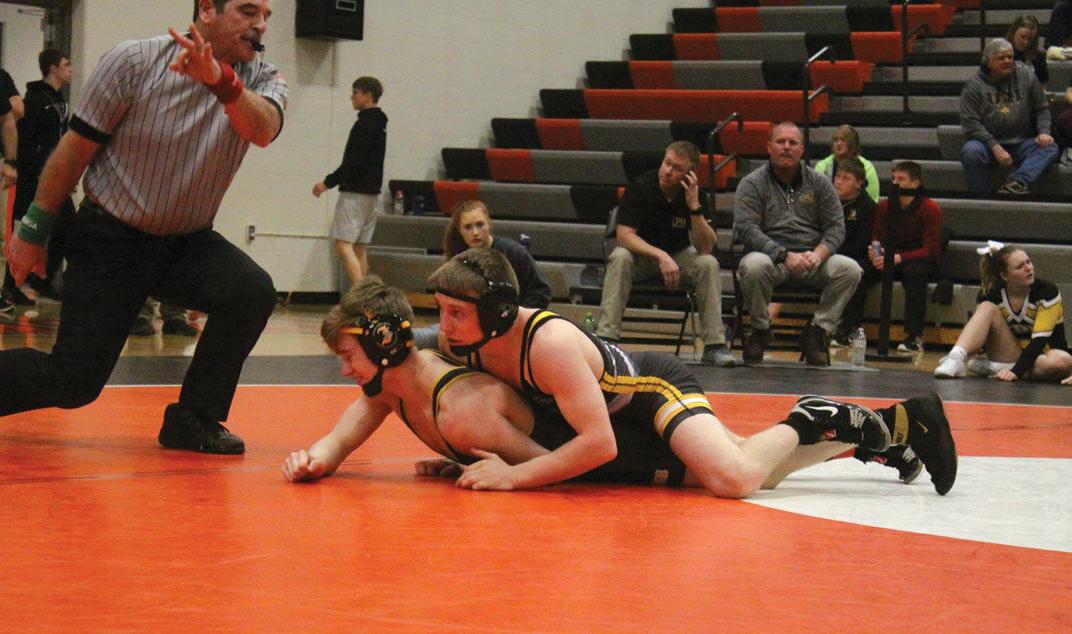 No. 3 (120) Caleb Fuessley (CPU) has gone through the regular season, sectionals (shown in picture), and now districts with a perfect record at 41-0. The Stormin' Pointer senior will look to keep that in tact en route to a state championship in Des Moines.

Peek-a-boo: On his way to the State Tournament again, No. 1 (138) Jack Thomsen of Union looks to improve upon his bronze medal finish from a season ago this year.

No. 5 (152) Scott Betterton (V-S) is shown competing at Sectionals on February 2nd. This past Saturday, Betterton earned win number 40 for his senior season, while also becoming a three-time State qualifier.

No. 3 (120) Caleb Fuessley (CPU) has gone through the regular season, sectionals (shown in picture), and now districts with a perfect record at 41-0. The Stormin' Pointer senior will look to keep that in tact en route to a state championship in Des Moines.

INDEPENDENCE - Nine out of the 17 local wrestlers that placed top two at Sectionals last week were represented by Union, a team that traveled to Independence High School Saturday for Class 2A, District 5 action.

Coming off of a Sectional team championship with 247.5 points at Parkersburg, it was no surprise that the Knights boasted the most qualifiers from their side a few days ago. However, with work still to be done, Union was willing to do it as they had all but two of their individuals earn spots to the State Tournament. Unfortunately that duo was a pair of seniors in Kaleb Roach (160) and No. 5 Lane Albertsen (220), who finished their careers at fourth and third place respectively.

“The emotions are high and low as we’re leaving two seniors behind that have meant a lot to the program the last four years, but we have seven going with most of them being under-classmen. There’s ups and downs from the whole day,” said Union Head Coach Bart Mehlert.

Beginning first with the State qualifiers that were also District champions, No. 1 (138) Jack Thomsen and No. 1 (152) Adam Ahrendsen, held that honor proudly. Impressing with a perfect 41-0 record coming into Saturday, Thomsen had not been pushed to the brink very often this year. However, in the junior’s first match of the day, he found himself on his back early and down 5-0 at the end of the first period to North Fayette Valley’s No. 10 Gunner Rodgers. Not panicked though, Thomsen collected himself and eventually got back into a flow before winning via an 11-6 decision. This pushed him to the finals where Thomsen defeated Carson Babcock (New Hampton/Turkey Valley) decisively with a 15-4 major decision.

A few weight classes above at 152, Ahrendsen (41-1) set up a top 10 finals match with a pin (1:01) over Jesse Daughton (North Fayette Valley) in the semi-final round. Matching up against No. 7 Matthew Doyle (28-5) of the host Mustangs, these two wrestlers had combined for just six losses the whole season and it showed as nothing came easy. However, with a late escape, earning one point, Ahrendsen won the hard-fought battle with a 6-5 decision.

“I think the next step for these two is the top of the podium (at the State Tournament). I tell them not to be scared of heights (laughter),” added Coach Mehlert.

The remaining five Union qualifiers all placed second, but most of them were not able to take the easier route. The lone wrestler that was fortune enough was 33-10 junior Lake LeBahn (126). Following a pin (3:17) over Matthew Slifka (Crestwood) in the semi-finals, LeBahn squared off against No. 9 Mason Cleveland of New Hampton/Turkey Valley and was pinned (2:59) midway through the second period. However, due to the win against Slifka earlier, LeBahn did not have a wrestleback and advanced.

The path to Wells Fargo became all about wrestlebacks for the final quad of Knight wrestlers though. Commencing with No. 10 Lincoln Mehlert (29-12) at 106, the sophomore started his day with a 9-1 major decision over Austin Wilkins (Decorah). Then in the finals, Mehlert could not get past No. 3 Carter Fousek (34-4) as he was pinned (3:02). This forced Mehlert into a tough wrestleback against Carter Kolthoff of South Hardin/BCLUW, but the Union sophomore was able to power his way to an 8-5 decision.

Following in order was No. 9 Kolten Crawford (30-6), who earned a semi-final pin (3:51) over Carsen Jeanes of Oelwein at 113. This victory pushed the sophomore into a ranked battle with No. 8 and 41-4 Isaiah Weber (Independence) in the finals. Deadlocked at fours after three periods couldn’t decide a winner, Weber finally was able to get a take down in overtime to become champion, which sent Crawford to a wrestleback. Luckily, that still did not stop him from earning a spot to State as he won via a 5-1 decision over Jonathan Dreckman (New Hampton/Turkey Valley).

Entering a 120 pound bracket Saturday that included two wrestlers with at least 35 wins, Hunter Worthen (26-18) knew he had his work cut out for him. However, that did not stop him from fighting like a champion, despite a semi-final loss via pin (1:45) against No. 4 Kaden Anderlik (38-3) of Crestwood. Facing off against Levi Lauer (North Fayette Valley) in the consolation round, the freshman got the pin (4:28) to keep himself alive and with a loss by Taylor Kolthoff (35-3) of South Hardin/BCLUW in the finals, the two would meet in a wrestleback. With a State berth on the line, these two gave the crowd one of the most exciting, back and forth matches of the day. However, in the end, it was Worthen that came away victorious via an 11-10 decision.

Facing a similar situation to Worthen, freshman Stone Schmitz (29-13) also lost his opening match at 132 Saturday via a 13-2 major decision to eventual champion, No. 7 Jackson Rolfs (Decorah), but he believed in a never say die attitude as well. Going down to the wire, Schmitz earned a hard-fought 5-3 overtime victory over Brayden Anderson (New Hampton/Turkey Valley) in the consolation round, setting up a wrestleback with Coby Willett (South Hardin/BCLUW). In becoming the seventh and final State qualifer for Union, Schmitz collected the second period pin (2:37).

DEWITT - While Union was the only local team by themselves Saturday, eight combined wrestlers from Vinton-Shellsburg (4), CPU (3), and Benton (1) make their way to Central Dewitt High School where the Sabers hosted Class 2A Districts (2).

Hoping to replicate success similar to that of Union, the trio of schools hit the mats. Unfortunately, one individual from each school fell a bit short of the ultimate goal, which was a spot at the State Tournament (list below):

However, with eight starting the day, that meant that five had moved on, beginning with Cole Whitehead (CPU) at 113. The sophomore (34-5) opened up with a pin (3:57) of Owen Ray (Monticello) and then followed with another pin (1:15) of Lincoln Holub (Mount Vernon) to become champion.

Coming in consecutive weight class order, No. 3 Caleb Fuessley (39-0) joined his teammate as the senior continued to dominate at 120, first with a pin (1:48) over Ben Vogel (Camanche). Then it was a 16-5 major decision over No. 7 Ryan Clark (Mount Vernon).

"Cole and Caleb have been working all year for this and it definitely showed that they are deserving of being State qualifiers. They are excited to be going, but the goal now is to improve from where they finished last year," added CPU Head Coach Matt Grennan.

The final three qualifiers were all represented by the Vikings. Competing at 132, senior No. 10 Brock Radeke (36-9) faced a tough challenge in his semi-final match against No. 8 Jacob Felderman (Davenport Assumption), but the challenge was not too big as Radeke prevailed with a 5-2 decision. His luck would not be as good in the finals against No. 5 Ryan Phillips (West Delaware) as he fell via an 8-1 decision. However, the senior was not forced into a wrestleback due to his earlier win.

"The fact that he qualified is huge for him. He had a great season last year with winning the WaMaC tournament, but probably had his worst match of the year in the postseason. To come back and get some redemption, that felt really good," stated V-S Head Coach Brian Sheston.

"This is Luke's third trip to State, qualifying his freshman, junior, and now senior seasons. Last year, he got sick right before the tournament and it really showed in his wrestling. I know he is looking to get to the top of that podium and hasn't lost a match since moving down to 138," commented Coach Sheston.

Last, but not least, No. 5 Scott Betterton (38-6) was also able to win both of his matches Saturday to become a District champion at 152. His day began with a pin (1:49) over Evan Forker (Davenport Assumption). Then in the finals, the senior defeated No. 6 Mitchel Mangold (West Delaware) via a 7-3 decision.

"Scott is another wrestler peaking at the right time. He has gone through a meat grinder of a schedule with four of the best wrestlers in the state at 152 all being in the WaMaC conference. Making his third trip to Des Moines, he knows that this time he can finish the tournament on Saturday night," said Coach Sheston.

Congratulations to the dozen local wrestlers that will be competing at Wells Fargo Arena in Des Moines this Thursday-Saturday! The Class 2A schedule for the dozen wrestlers is as follows.

Class 2A, District (5) wrestling photo gallery at Independence with Union

Photos from a Class 2A, District (5) wrestling meet at Independence with Union on February 9, 2019.