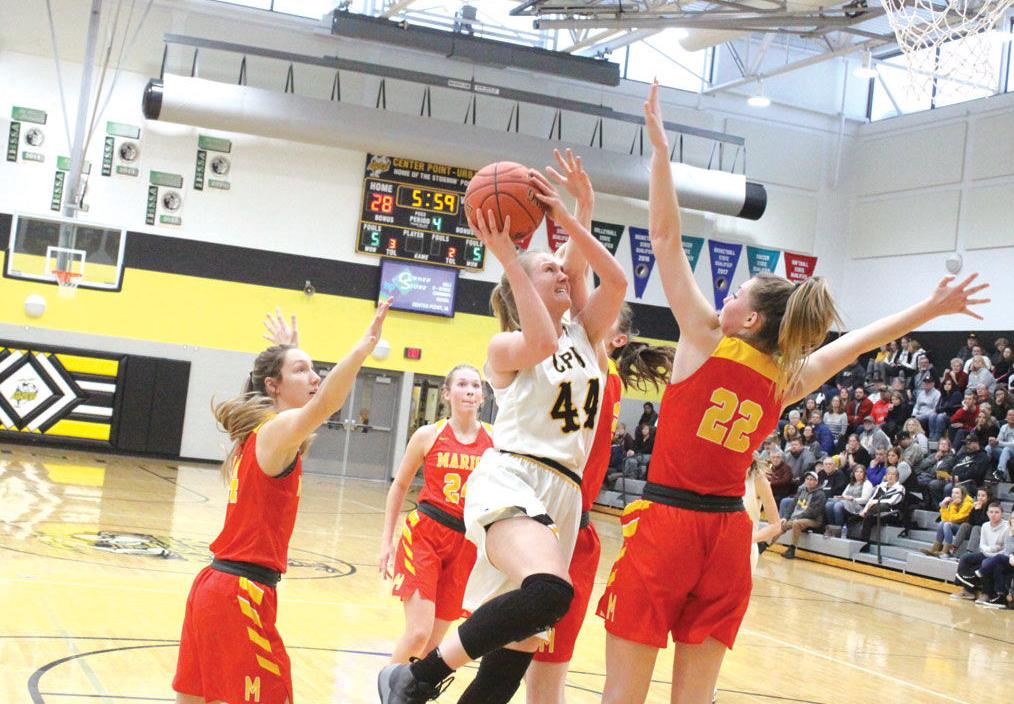 Nothing comes easy: A slew of Marion defenders bring strong defense as #44 Callyn Fox attempts to get a shot off in the lane. The Indians won 54-35 Saturday at CPU. 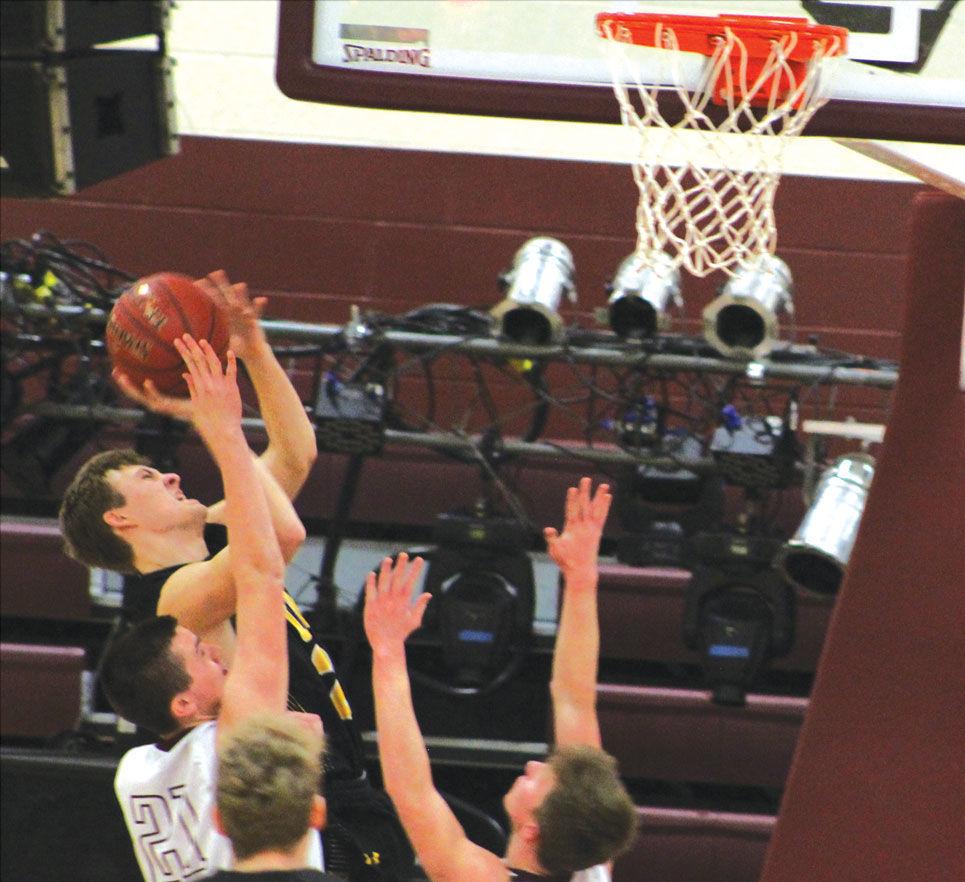 Nothing comes easy: A slew of Marion defenders bring strong defense as #44 Callyn Fox attempts to get a shot off in the lane. The Indians won 54-35 Saturday at CPU.

*Box scores from other action Friday and Saturday included at end*

INDEPENDENCE – In a match up of conference rivals, No. 3 (3A) CPU was just too much for Independence as they cruised to a 53-14 victory.

The game’s outcome was left little in doubt by halftime as the Stormin’ Pointers took a dominating 36-10 lead after two quarters. CPU freshman Ryley Goebel scored 12 of her 14 points in the first half, but still was the team leader in points.

Independence was held to only four points in the second half as they were outscored 17-4 in the last two quarters. All four points were by Mustangs junior Mary Puffett on two field goal shots.

CPU moves to 15-1 (9-0 West) after their win on Friday night, while Independence’s loss drops them to a 1-14 record for the season.

After falling behind in the first quarter, the Independence boys were never able to recover as CPU kept the momentum going for a 65-39 win.

Entering the third quarter, Independence was behind by 20 points. They outplayed CPU in the quarter and outscored them 12-10. However, it was too little, too late as CPU closed out the game by outscoring Independence 14-6 in the game’s final quarter.

The Mustangs (2-12) ran into foul trouble in the game as they combined for 18 fouls for the game. By comparison, CPU had nine team fouls.

Friday’s game was originally scheduled to be played at CPU, but was changed to Independence due to weather conditions.

CPU moves to 9-6 (7-1 West) after the win. Next up for the Stormin’ Pointers was supposed to be a home game tonight against Clear Creek-Amana. However, the weather continues to cause fits and the divisional contest has been postponed with a make up date still to be determined.

CENTER POINT - Saturday afternoon was more than just a pair of highly ranked girls teams meeting up for a WaMaC cross-divisonal showdown.

It was also a battle of two programs that had enjoyed long winning streaks that would be put on the line.

Moving to the East division for 2018-2019, this meant this would be Marion’s only game against the Stormin’ Pointers this season and they wanted to make the most of it. Unfortunately, for the home team Saturday, that’s exactly what happened.

Despite that though, the action remained close early. After the Indians scored the opening two points of the game, CPU responded with a Madie Willson lay up and a pair of Adrianna Katcher free throws to take their first and only lead of the contest at 4-2. Following a three pointer on the next possession by Marion’s Kayba Laube, Katcher connected on a free throw to bring it into a tie. However, the Indians were able to finish the quarter on a 9-2 run in order to double up the Stormin’ Pointers.

Trailing 14-7 to begin the second, the deficit got bigger for CPU as Leah Van Weelden found the bottom of the net on a three pointer and a lay up. After a Stormin’ Pointer timeout, senior Callyn Fox would halt the 10-0 Marion run with two free throws, but five more Indian points followed. This eventually led to a 29-14 halftime margin as CPU could only get three Karly Millikin free throws and a Ryley Goebel put back lay up.

Continuing upon her hot shooting from the outside, Van Weelden got a three to fall to start the third quarter for the Indians. However, beginning with a Fox lay up, along with six combined points by Millikin (two free throws) and Goebel (jump shot and two free throws), the Stormin’ Pointers had cut the deficit to 34-22 as a timeout was called. Moving through the action, CPU would get it down to as little as 11, but a Van Weelden lay up and a shot at the buzzer by Laube helped Marion stretch their lead back to 15 at 41-26.

This kept the Stormin’ Pointers within striking distance, but they would have to move quickly. Unfortunately, the Indians would not allow it as their lead stretched all the way to 21 before Katcher added the final two points of the game on a lay up to see CPU fall for just the second time this season, 54-35.

“Back and forth early, but then we got a lull there in the first quarter and couldn’t score. Then we couldn’t make up any ground and I told the girls we had plenty of opportunities inside and out, but nothing would drop. The effort was good, we just need to clean some stuff up,” said Head Coach Philip Klett.

Combining for all but nine points was Fox (10), Katcher (8), and Goebel (8). The latter two also added nine rebounds each. CPU (15-2, 9-0) was scheduled to go to Clear Creek-Amana tonight, but the game has been postponed due to weather and a make up date has yet to be determined.

Box scores from other basketball action Friday and Saturday

Along with Benton and CPU in action, the other two local schools returned to the hardwood over the weekend as well. The box scores are as follows.

Union (3-12, 1-10) at Hudson Thursday with a 6:15 p.m. start (scheduled game tonight vs Sumner-Fredericksburg has been moved to February 5th)

Union (1-13, 1-9) at Hudson Thursday with a 7:45 p.m. start (scheduled game tonight vs Sumner-Fredericksburg has been cancelled and won't be made up)

Photos from a WaMaC cross-divisional girls basketball game between the Marion Indians and the CPU Stormin' Pointers on January 26, 2019.