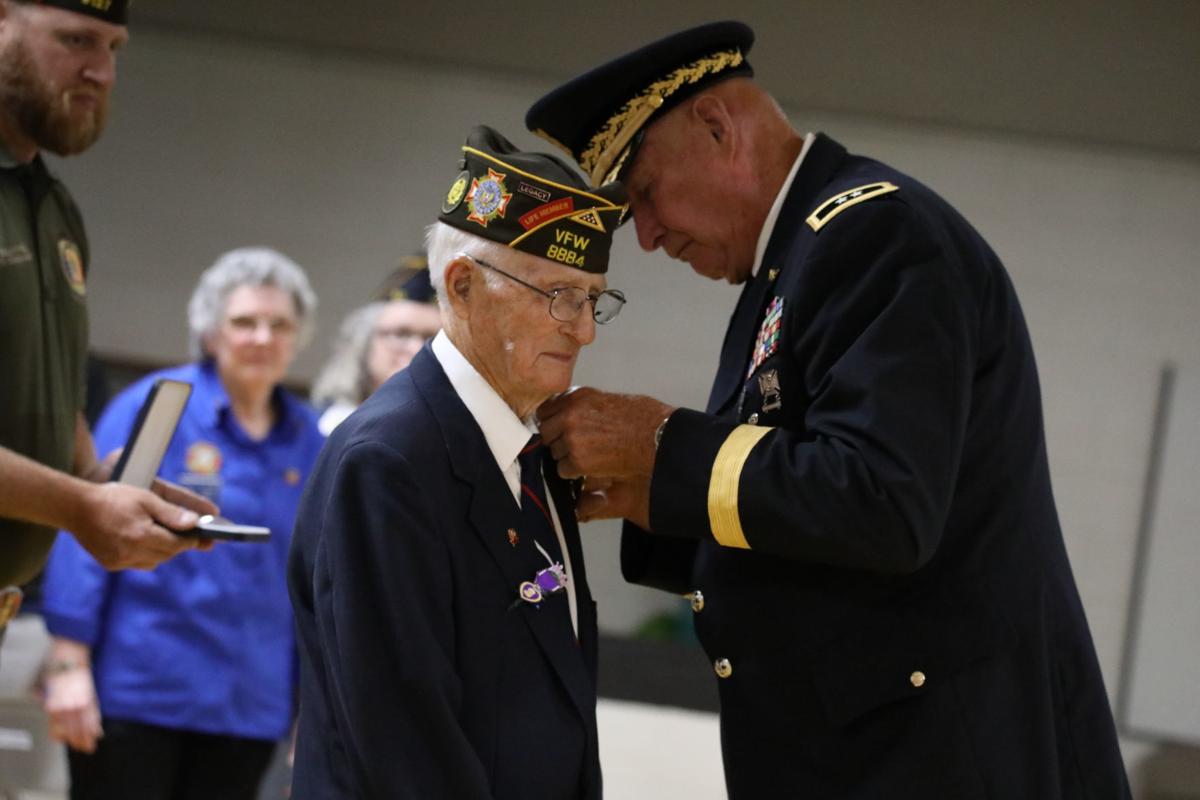 Sergeant John Gualtier is presented the Purple Heart by Major General Robert Sentman during a ceremony on Saturday, June 20. 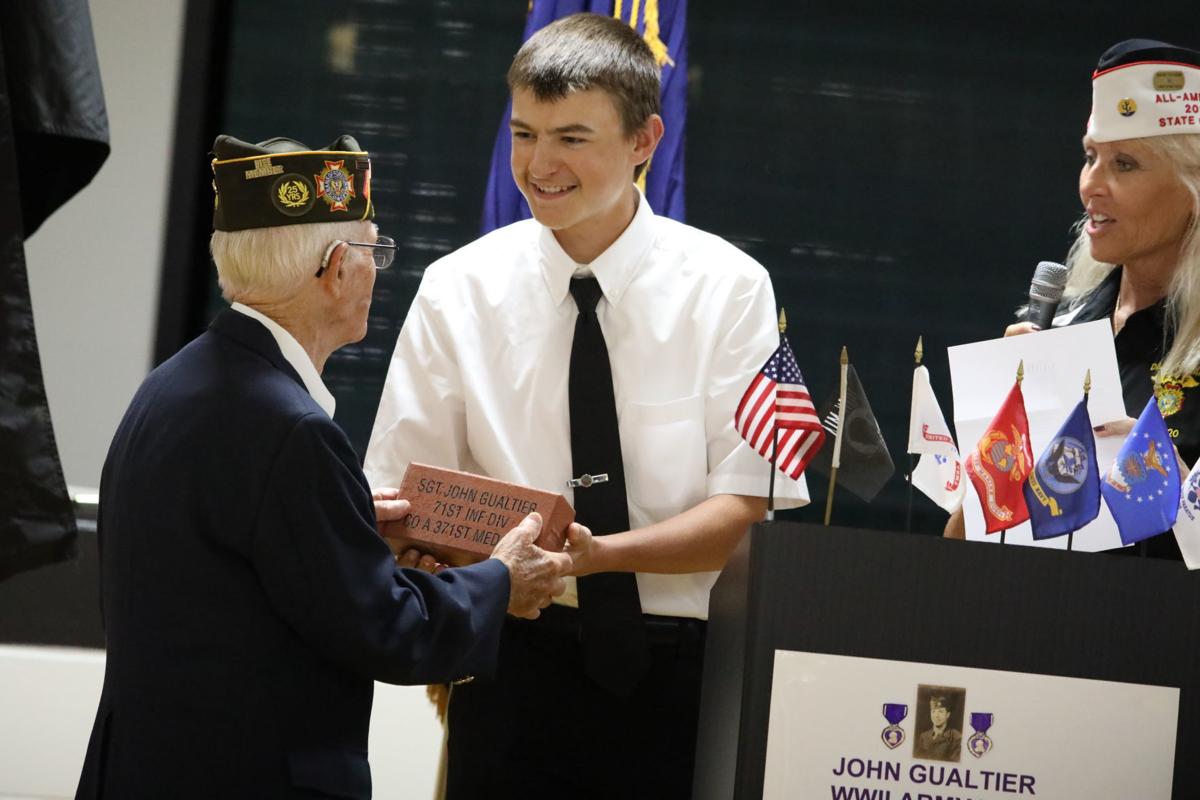 Ari Lee, 17, of Winterset presents Sergeant John Gualtier with a commemorative brick as a tribute to the World War II veteran. A brick will be laid at a veteran’s memorial in Louisiana in Gualtier’s name, funded by Lee and donations.

Sergeant John Gualtier is presented the Purple Heart by Major General Robert Sentman during a ceremony on Saturday, June 20.

Ari Lee, 17, of Winterset presents Sergeant John Gualtier with a commemorative brick as a tribute to the World War II veteran. A brick will be laid at a veteran’s memorial in Louisiana in Gualtier’s name, funded by Lee and donations.

Sergeant John Gualtier arrived on Normandy Beach, France in February of 1945, months after the infamous D-Day landing. While the beaches were devoid of fighting, the front closing in on Berlin was intense and brutal. Even as a combat medic, there was no guarantee of safety for Gualtier. He could not carry a gun or a knife. A red cross on his helmet and arm signified his non-combatant role.

April 30, 1945. The shelling from the Axis forces had injured several soldiers and no one could reach them, except for Gualtier. Despite being injured in the process, the medic from Ohio ran from his cover six times to save these lives. All survived as Gualtier tended to them before worrying about himself.

While Gualtier was indeed injured during active duty, he was not awarded the prestigious Purple Heart. During the fighting, Gualtier failed to put on a tag signifying he had been injured, “cheating himself” out of the award. This is a scenario many veterans from all modern wars have experienced.

“It’s not unusual,” Major General Robert Sentman said. “I presented a lot of these over the years and there’s still a lot of people out there who should be presented one. It’s an effort to get all the documentation necessary to qualify. You got to have eye witnesses. The older you are, the harder it is to get all of that and apply.”

Gualtier had all but given up on ever receiving a Purple Heart. He returned home a “changed man” after seeing the crimes of Nazi Germany up close and personal at the Gunskirchen Lager concentration camp. While in Nuremberg, Gualtier tended to soldiers on guard during war trials. He spent six years in the military, including a year overseas in the Korean War before moving with his family to California.

It was during his time out west he met his first wife, Marion, an army nurse from Vinton. The couple moved to Vinton and raised two children together. Gualtier became active with local veterans and strived to ease their pain. Marion would pass away and Gualtier married his wife Jill in 2004, residing in Vinton.

He tried “several times” over the years to apply for the Purple Heart. In 1995, Gualtier was presented with the Bronze Star by Sentman, a medal the two-star general stated was also “belated” for the former medic. When Ron Geiger with the local Veterans of Foreign Wars heard Gualitier’s story documented in the film “Heroes Among Us”, he reapplied for the Purple Heart on Gualtier’s behalf. In the late winter, Gualtier learned the application was accepted and he was to receive a Purple Heart on March 28 in the high school gym.

“I’m really shocked that I got it because a couple of times we put in for it and was turned down,” Gualtier said in early March. “By golly, we got it this time. I’m really pleased and happy I got it.”

COVID-19 spread to Iowa and postponed the ceremony. Businesses and schools across the state were closed down and there was no way to host an event until restrictions would be lifted. Eventually, a new date was set for Saturday, June 20 inside the Vinton Skate Center. Local veterans and Gualtier’s family members lined up the floor. Military tradition was honored and Gualtier’s life story was told before his guests. Among those present was Sentman, who came forward to present Gualtier with yet another distinguished recognition 25 years after two men first met. With a slight bit of difficulty, Sentman pinned the Purple Heart to Gualtier’s chest as cameras clicked from every angle. At the age of 94 and 75 years after that April in Germany, Sergeant Gualtier became a Purple Heart Recipient to great applause.

“It’s an honor for me to do that to somebody so well deserving,” Sentman said. “That’s all you can say. It was earned, deserved and presented.”

After Gualtier drank in the emotions and sights around him, he took to the podium and spoke frankly about the one thing that helped him conquer his demons: talking about it with students. Gualiter has participated in “Vets In the Classroom” with Kelly Steffen’s students at Vinton-Shellsburg over the years.

“It helped me more than any doctor or psychologist ever could,” Gualitier said.

One more honor awaited him. 17-year old Ari Lee of Winterset and Past Department Commander Carol Whitmore took to the podium. Lee had met Gualtier four years ago through a mutual acquaintance, Dale Henry with Veterans of Foreign Wars Post 8884.

“[Henry] asked if I wanted to meet a World War II veteran,” Lee said. “I was really excited about it, but as time went along, I wondered ‘why would he come out two and a half hours to meet me?’”

But indeed Gualtier visited Lee in Winterset in 2016 to share his story. Gualtier also gave Lee his uniform and other mementos to remember their meeting. Despite 77 years separating the two, Lee came to know Gualtier as a friend. One day, Lee was reading an aviation history magazine and saw an advertisement on the back. The ad was for memorial bricks, which could be purchased and laid at a veteran’s memorial in Louisiana.

“I decided it was something I could do for John,” Lee said. “But I couldn’t raise the funds myself.”

In addition to the brick to be laid in Louisiana, Lee also wanted to purchase a matching commemorative brick to be given to Gualtier. With help from Henry and Whitmore, Lee was able to raise the money and make the trip to Gualtier’s award ceremony to present the brick to his friend personally.

“I can’t describe the feeling of being here for him during this moment,” Lee said. “He did a lot for me before I was even born, fighting in the war. To be honest, I felt a bit intimidated going up to give a speech. I just wanted to push past my fear and thought ‘don’t worry about yourself. This is for John.’”

The feeling of respect is mutual for Gualtier.

“I’m glad we have youth like this in today’s world,” Gualiter said. “He’s a real clean-cut kid and I’m glad to know him and to have given him my uniform.””

At the end of the hour-long presentation, Gualtier spoke with the attendees ranging from friends to family to military leaders. When the crowd began to dissipate, Gualtier took a moment to go back outside and get a moment of peace.

“It will all probably hit me when I get home and settle down,” Gualtier said. “It was a great program, just terrific.”

Sergeant John Gualtier may have had to wait several months for his ceremony to take place, but months cannot compare to the years it took to recognize a hero among us.