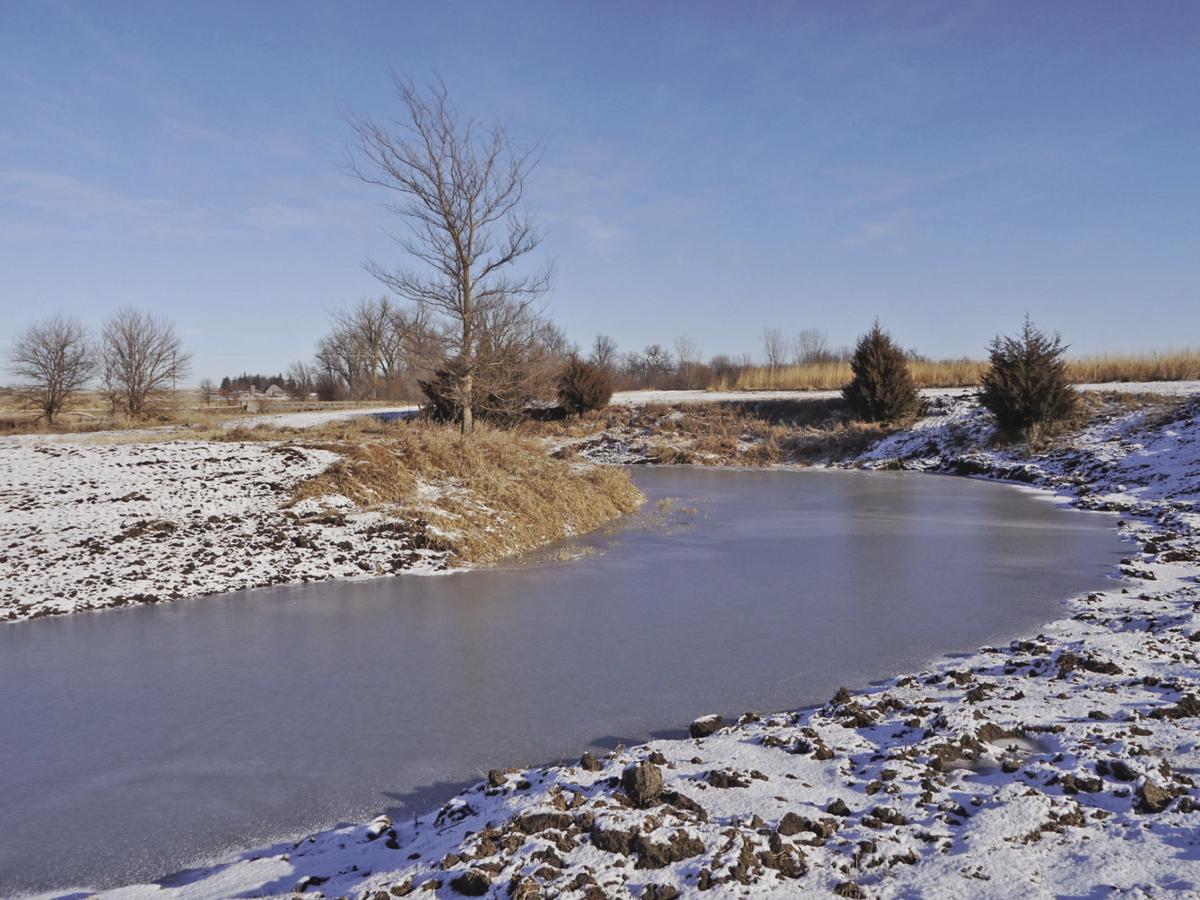 The Fleming oxbow photographed after restoration was completed. 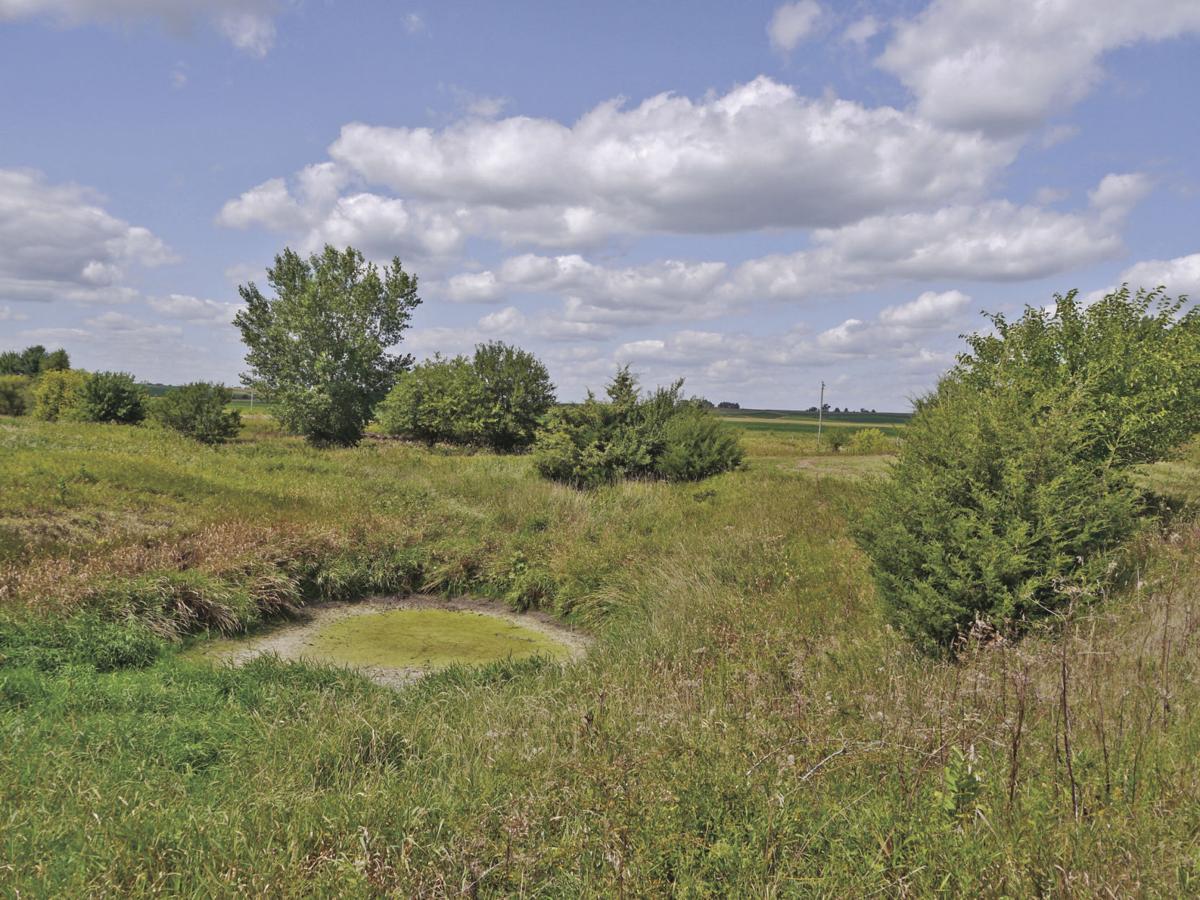 The view of the Fleming oxbow facing east prior to restoration. Photos submitted by Nicholas Longbucco 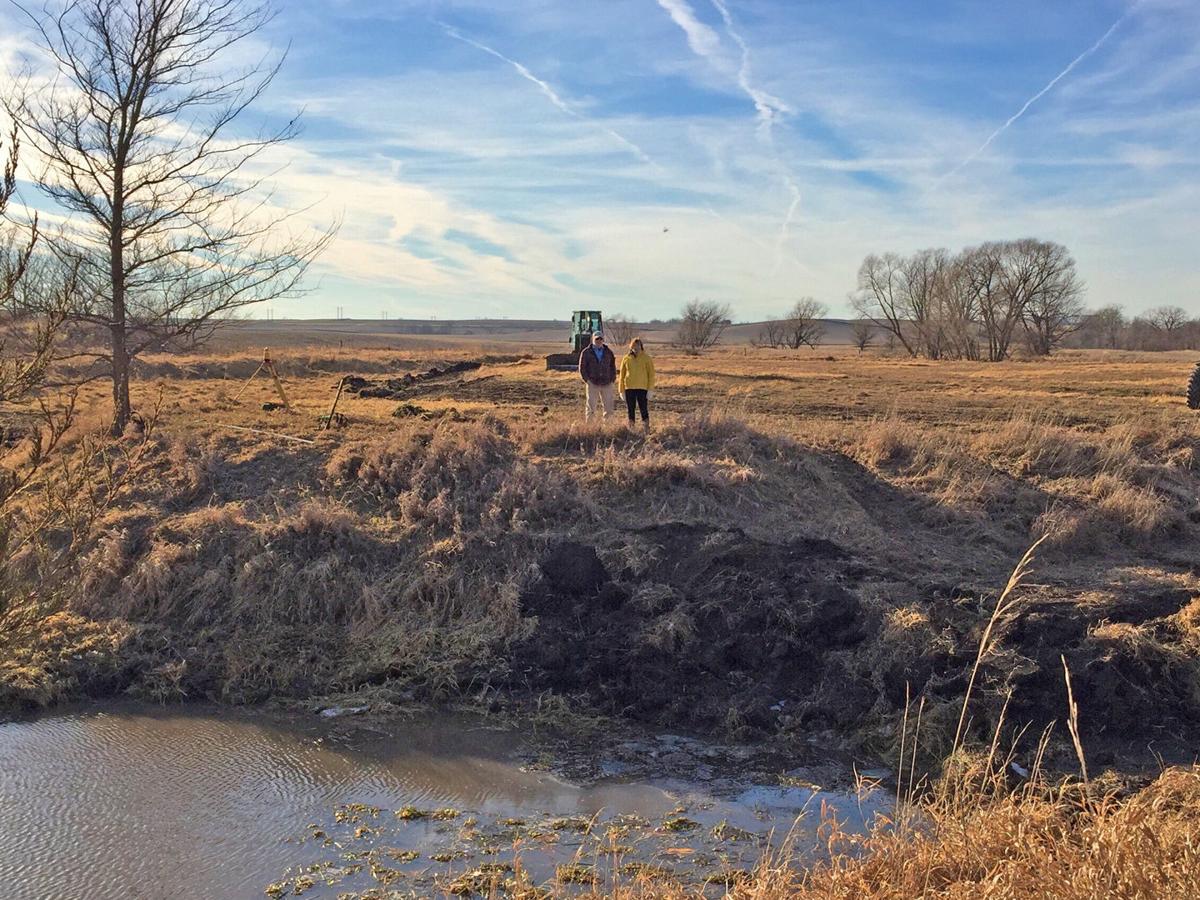 Landowner Jim Fleming (left) and TNC in Iowa board of trustees member Ann Jorgensen (right) pose for a photo at the top of Fleming’s oxbow restoration site in late December during a site visit.  Photos by Ruby F. Bodeker 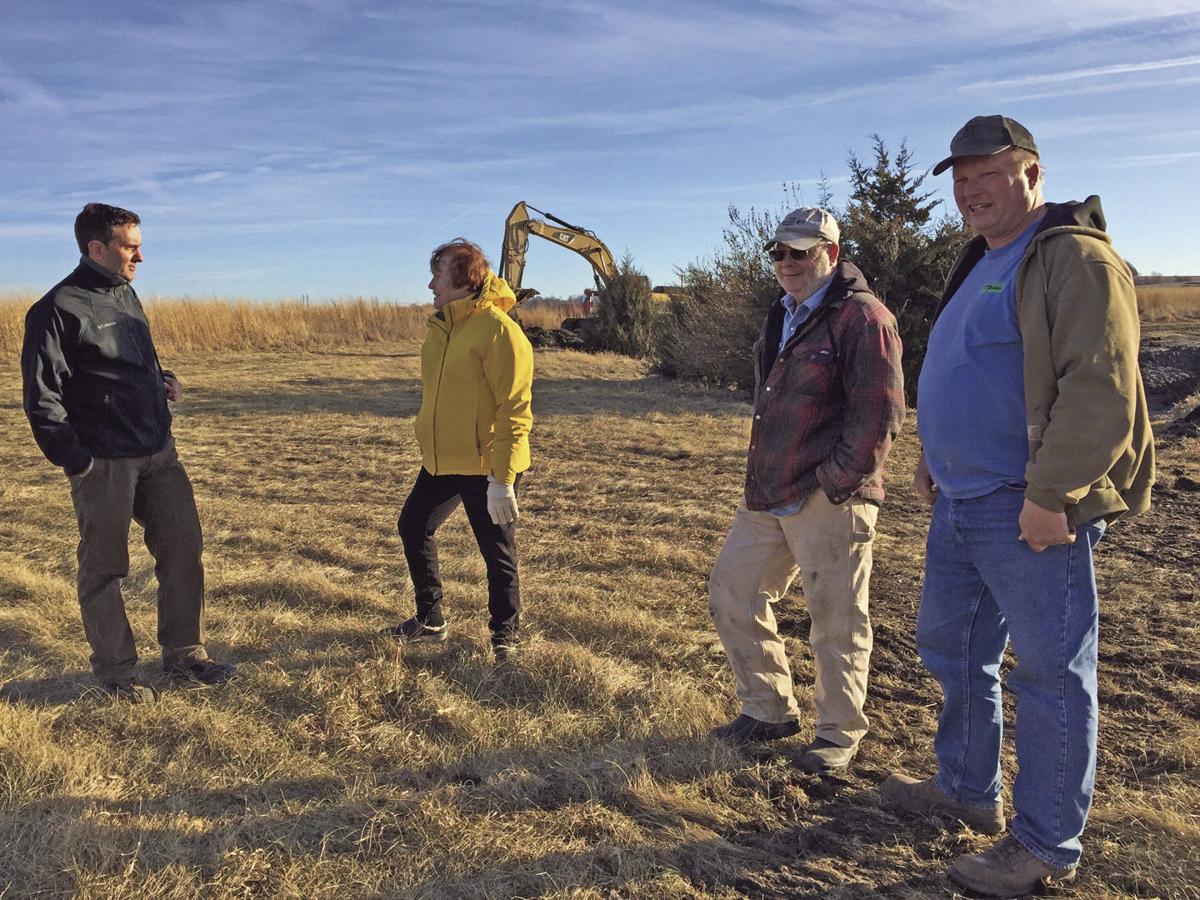 Key players in the Fleming oxbow restoration project chat during a late December visit to the Pratt Creek work site, from right to left: Nicholas Longbucco and Ann Jorgensen with The Nature Conservancy in Iowa, landowner Jim Fleming, and contractor Louis Guynn with Laser Precision. 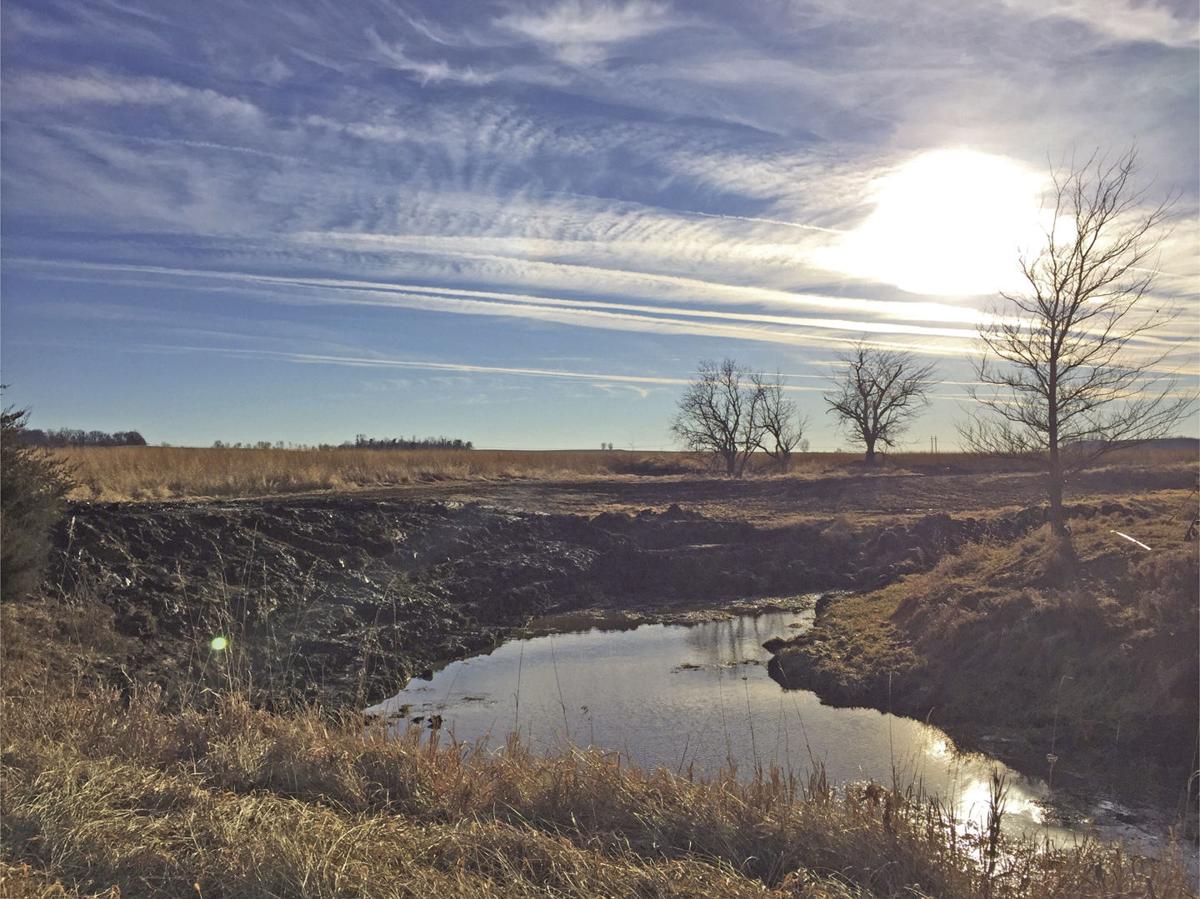 The view of the Fleming oxbow facing west as it appeared during the restoration process.

The Fleming oxbow photographed after restoration was completed.

The view of the Fleming oxbow facing east prior to restoration. Photos submitted by Nicholas Longbucco

Landowner Jim Fleming (left) and TNC in Iowa board of trustees member Ann Jorgensen (right) pose for a photo at the top of Fleming’s oxbow restoration site in late December during a site visit.  Photos by Ruby F. Bodeker

Key players in the Fleming oxbow restoration project chat during a late December visit to the Pratt Creek work site, from right to left: Nicholas Longbucco and Ann Jorgensen with The Nature Conservancy in Iowa, landowner Jim Fleming, and contractor Louis Guynn with Laser Precision.

The view of the Fleming oxbow facing west as it appeared during the restoration process.

Meandering and slow-moving, that’s how Iowa’s creeks and streams historically ran and thanks to the efforts of two Garrison farmers--Jim Fleming and Ann Jorgensen--it’s the way it could be once again in Benton County.

Fleming has lived on and farmed his family’s land in Jackson Township for all his adult life--land through which Pratt Creek cuts across as it makes its way toward the Cedar River, eventually meeting up with it near the intersection of 22nd Ave and 22nd Ave Trail north of Vinton.

Jorgensen was born and raised in Garrison on her family’s Big Grove Township farm. She has a diverse career portfolio, which includes a decade spent in Washington, D.C. where she became the first woman to chair the board of directors of the Farm Credit System Insurance Corporation.

But the one constant throughout her life has been keeping her family farm productive with conservation in mind.

It was conservation which brought these two farmers together on an unseasonably mild day in December, just before Christmas this past year, near the steep banks of Pratt Creek south of where it intersects with 57th Street.

Fleming was taking part in an oxbow restoration on his land and Jorgensen was visiting the worksite in one of her final acts as a member of The Nature Conservancy (TNC) in Iowa’s Board of Trustees before retiring January 1 after a dozen years of service.

“I hunted muskrat on this [as a kid],” said Fleming as he motioned to an approximately one-acre, muddy piece of former creek pasture that was in the process of being dug  up and dredged, “there used to be mink back here...not anymore.”

An oxbow, according to TNC’s Cedar River Basin freshwater manager Nick Longbucco, who was also present at the worksite that day, is a remnant meander of a river or creek that was cut off from the main channel either by extreme erosion or human alterations.

The resulting back channel habitat is what is referred to as an oxbow and its presence on the landscape is so much more than just a good fishing hole.

Prior to European settlement, Iowa likely had thousands of oxbows. Through the use of old aerial photos and elevation maps, Longbucco says he has mapped over 200 potential oxbow restoration projects in Benton County alone.

But as the land was altered to accommodate larger and larger farm operations, creeks and streams were straightened and redirected, often to parallel the roads, in an effort to divert water off the fields--and that has led to water quality problems downstream, increased flooding throughout the landscape, and a reduction in habitat.

“Iowa is a hydrologically-modified landscape,” explained Longbucco. “Many of the creeks in Benton County were straightened, some 20 percent...we lost those miles, but the same energy still flows through the waterways.”

And all that water has had to go somewhere. But an oxbow can change all that.

With the help of federal, state and local partners, TNC in Iowa has been championing and financing the restoration of oxbows during Jorgensen’s tenure on the board.

The Fleming Oxbow project was fully-financed and is the very first oxbow to be restored in Benton County--something that makes both Fleming and Jorgensen proud.

“An oxbow slows the water down...the water goes back through the oxbow, settles out...it then attracts native animals, is a good breeding place for fish, and acts as a massive natural filter on the landscape,” explained Jorgensen.

Indeed, research in north-central Iowa’s Boone River Watershed--where oxbows were previously restored in an effort to save the federally endangered Topeka shiner--showed oxbows are capable of removing anywhere from 45 to 95 percent of the nitrates coming off field tiling.

“Oxbows are just a better way of handling the water that comes off tile, working as a saturation buffer,” said Jorgensen.

Guynn said most excavators, including himself, “have not done this sort of work before” in reference to the earth-moving he was undertaking to locate the oxbow’s original streambed and restore the site.

“Change just takes time,” said Jorgensen during an interview conducted shortly before her visit to the Fleming oxbow. “There’s a lot to be optimistic about in Iowa...the government is starting to understand upstream there is work to be done, too [in terms of water quality]. It pays to put in oxbows. If you can make the incentive strong enough--small payments, assistance with [native] plants--the farmer becomes more interested. We can do this.”

According to Longbucco, oxbow restorations cost anywhere from $10-15,000 and usually are completed in marginal areas already prone to flooding, which means no land is taken out of production, but the payoff is tremendous in terms of flood mitigation, fertilizer filtration, and habitat restoration.

In the Boone River Watershed, thousands of fish representing at least 30 individual species have been found in oxbows, according to Longbucco, and 54 bird species have since been identified.

And that’s something that excites Fleming as both the landowner and an avid outdoorsman: “I like to farm, but this is my kind of thing...this countryside was my playground [as a child].”

Asked if he would undertake another oxbow restoration if he had the opportunity, Fleming doesn’t hesitate for even a moment, “I’d say yes. It’s a diamond in the rough.”

The Pratt Creek oxbow restoration has already seen floodwaters invade since the old creekbed was uncovered and the area surrounding it dredged to groundwater level, allowing the creek to meet up with the oxbow like they were long lost friends.

This summer all sorts of new species might turn up in and around the oxbow.

And from the vantage point of the 57th Street bridge northeast of the restored site, you might even catch a glimpse of a mink or perhaps a fishing pole or two, bobbing silently over the once-again meandering waters of Pratt Creek.

Note from Nick Longbucco: Landowners in Benton, Tama and other nearby Counties have a unique opportunity to receive technical and financial support for oxbows and other wetland restoration projects. Qualified landowners are eligible for 90% cost- share of restoration projects through the Iowa Watershed Approach’s Middle Cedar project: https://www.iowawatershedapproach.org/watersheds/middle-cedar-river/. The Conservancy is working with the local Middle Cedar coordinator, Adam Rodenberg, on covering the landowner’s 10%.

Showers this morning, becoming a steady rain during the afternoon hours. Morning high of 53F with temps falling to near 35. Winds NW at 10 to 20 mph. Chance of rain 80%. Rainfall near a quarter of an inch.