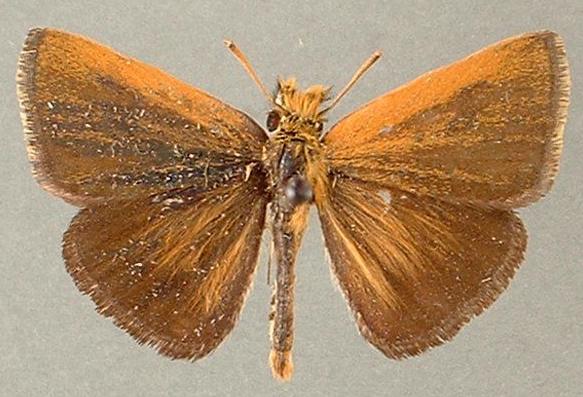 A preserved Poweshiek skipperling photographed by Dennis Schlicht. This tiny butterfly native to Iowa has not been found in the state for over a decade.  Photo submitted by Ruby F Bodecker

A preserved Poweshiek skipperling photographed by Dennis Schlicht. This tiny butterfly native to Iowa has not been found in the state for over a decade.  Photo submitted by Ruby F Bodecker

Tucked in a drawer at the back of a narrow room in a Center Point house rests what very well might be one of the last Poweshiek skipperlings collected in Iowa.

The Poweshiek skipperling is a small, brown-and-orange butterfly that once populated tallgrass prairies across the Upper Midwest.

It was named for the Iowa county in which it was first found, Poweshiek, in the summer of 1870 on a prairie slope.

As caterpillars, Poweshiek skipperlings feed mostly on native prairie grasses like big bluestem, a fact which, on its surface, would seem to indicate why this tiny butterfly can no longer be found in Iowa nor most anywhere else in the world.

But if you ask the owner of the Center Point specimen, the answer is far more complicated than just the loss of habitat.

The answer is also frightening.

Dennis Schlicht, 70, a retired A.P. Biology teacher, is the owner of the drawer.

He has spent a lifetime diligently photographing, documenting, and collecting butterflies and moths.

That life’s work led to the publication of his 2007 book “The Butterflies of Iowa”--also authored by John C. Downey and Jeffrey C. Nekola.

At publication, there were 118 known butterfly species breeding in Iowa, the Poweshiek skipperling included, but today, according to Schlicht and his insect-studying cohorts, Iowa would be lucky to count that many.

Back when Schlicht collected his Poweshiek skipperling, the little butterfly wasn’t rare, but sometime around 2006, their numbers evaporated.

“They’re gone, extirpated from Iowa, disappearing across their entire range,” he explained during an informal meet-up at his house in late December to discuss the significant insect decline he quite inadvertently has been documenting since his undergraduate years at UNI.

All three have spent years voluntarily working to document the insect population in Iowa.

“My book is far too optimistic,” said Schlicht as the men were seated around a table, each in possession of scientific texts and anecdotal evidence pointing to a stunning drop in insect numbers the world over.

And then Schlicht added with poetic flair, “For the prairie bugs anyway, we ended up overseeing the funeral.”

The three men at the table that day are part of a small group of Iowans, on their own time and dime, who are making herculean efforts to figure out what species of insects live in Iowa and how quickly and from where they are disappearing.

Species like the federally-endangered Poweshiek skipperling, which no one has been able to find in Iowa for at least a decade.

But also a full seven other butterfly species that are either completely gone from the state or well on their way to it.

They have collectively conducted extensive searches in the areas where these butterflies were reliably found--Olsen even offering cash bounties for photographs--and found nothing.

All agree, they’re running out of insects before they can even finish their research.

But where have all the insects gone?

A common refrain heard around the world this past fall was that insects are not turning up squashed on people’s vehicle windshields anymore.

It’s been termed “the windshield phenomenon” and many Iowans have noticed it.

Species may not be extinct, but they’ve been regulated to such small pockets of habitat--think half-acre “virgin” prairie pockets--that they no longer perform their roles on the landscape.

Dr. Kirk Larsen is the head of Biology at Luther College in Decorah.

He, too, has been documenting the decline of insect diversity.

“My students and I have been studying insect diversity in NE Iowa tallgrass prairies and other native and agricultural habitats for 25 years now,” wrote Dr. Larsen in a recent email. “My focus has been on what species of insects are present in different habitats, and one way to measure that is species richness.”

Adelbert ‘Bert’ Field Porter--for whom the nearby Porter House Museum in Decorah is named--traveled extensively all over the world collecting butterfly specimens, but also visited the prairies and meadows of Iowa.

In 1908, according to Larsen, Porter published a study listing 73 species of butterflies present in the Decorah area.

But the decline in insects isn’t just limited to butterflies and moths.

“I specialize on a group of beetles (Carabidae) that are important natural enemies of many pests such as cutworms and have been studying them in a variety of habitats, but particularly in Anderson Prairie, a planted prairie here in Decorah,” Larsen wrote.

“In our first study that occurred in 1996 we found 45 species of ground beetles in Anderson Prairie.”

Larsen and his students carried out a similar survey in 2015 and found 31 species of Carabidae beetle living in Anderson Prairie--a protected natural area seemingly immune from the effects of habitat loss.

“I feel a variety of factors are contributing to this drop in biodiversity, including land use change,” wrote Larsen.

Larsen also pointed to the effects of insecticide dust and pesticide drift from treated agricultural fields on native plants outside the fields as another big factor.

“The loss of insects is a big deal,” said Durbin, “they’re pollinators, plants will become rare without pollinators.”

Which in turn will make life much more difficult, if not impossible, for insects.

The importance of insects globally cannot be overstated, implored Olsen; insects make the world turn, he said, doing everything from pollination to feeding on refuse and dead animals to functioning as the base of the food web.

“To my knowledge,” wrote Olsen in an email sent a few days after the meet-up at Schlicht’s, “we have no real idea of the true loss of insects in Iowa. No one, me included, is doing the kind of systematic studies year after year of the same sites throughout the adult flight season.”

Stephanie Shepherd, a biologist with the Iowa DNR, is charged with monitoring wildlife in the state through the Volunteer Wildlife Monitoring Program.

“[T]here are no state led insect surveys currently,” wrote Shepherd in an email. “Jim Durbin does his best on his website [Insects of Iowa] to corral as many records as he can, particularly on moths and butterflies.”

The DNR is currently working to initiate a statewide survey focusing on the monarch butterfly, according to Shepherd, but there isn’t much else in the pipeline in terms of structured monitoring for insects.

Asked why he thinks the plight of insects isn’t receiving more attention and funding in light of evidence pointing to a troubling decline, Schlicht replied, “We don’t deal with charismatic mammals.”

The three eastern Iowa scientists will pick up their fieldwork again this spring, visiting dozens of sites across the state and uploading their findings to Durbin’s massive database at www.InsectsofIowa.org.

Schlicht is almost certain the Poweshiek skipperling will never fly in Iowa again, despite being first described here.

ust one tiny butterfly, but it represents a global trend.

Partly cloudy skies during the evening giving way to a few showers after midnight. Low around 65F. Winds light and variable. Chance of rain 30%.

Partly cloudy skies during the evening giving way to a few showers after midnight. Low around 65F. Winds light and variable. Chance of rain 30%.