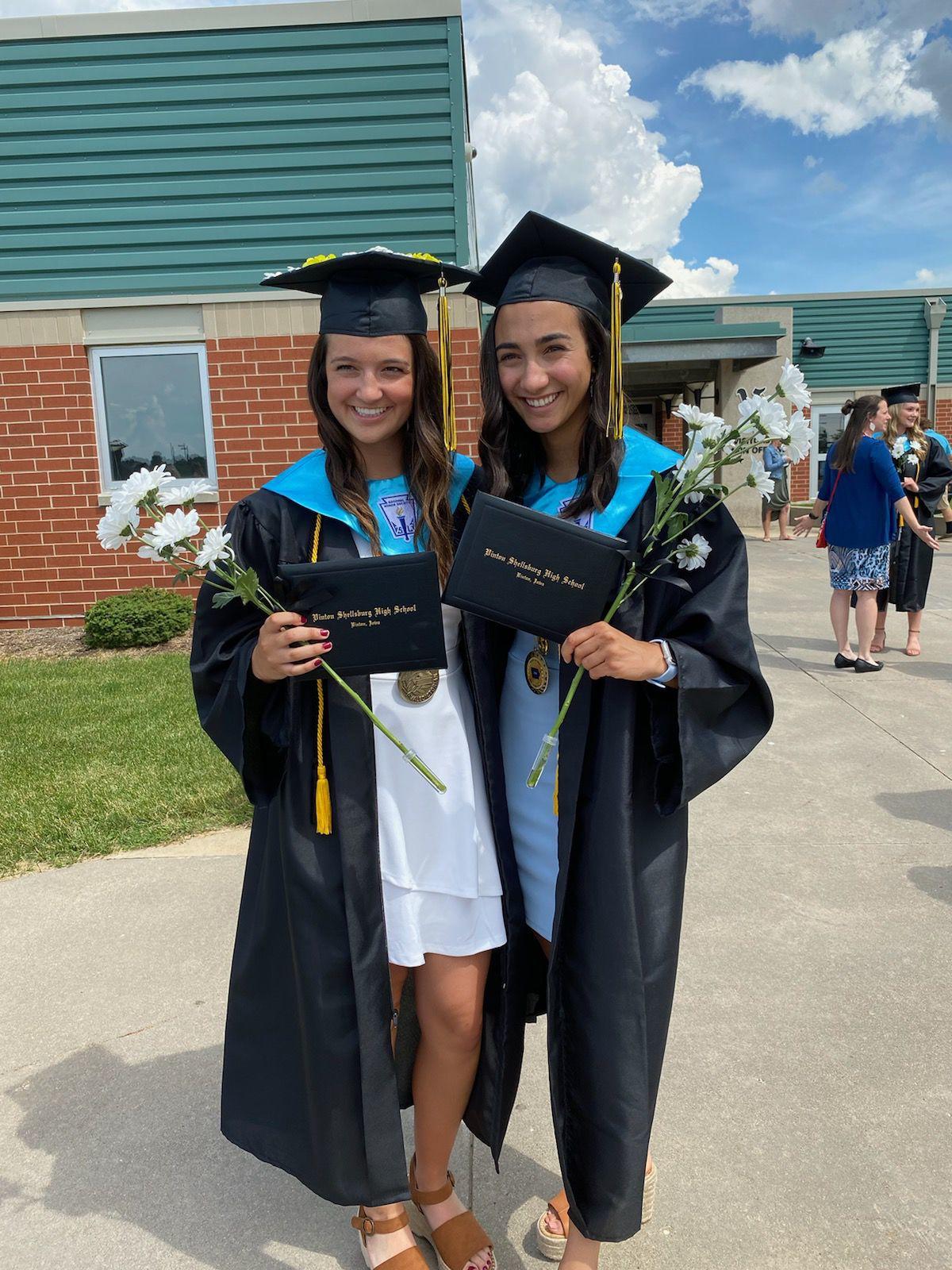 Lillie Lamont and Carli Lang returned to Vinton in time to take part in graduation after two months working as CNAs in a New Jersey COVID hospital. 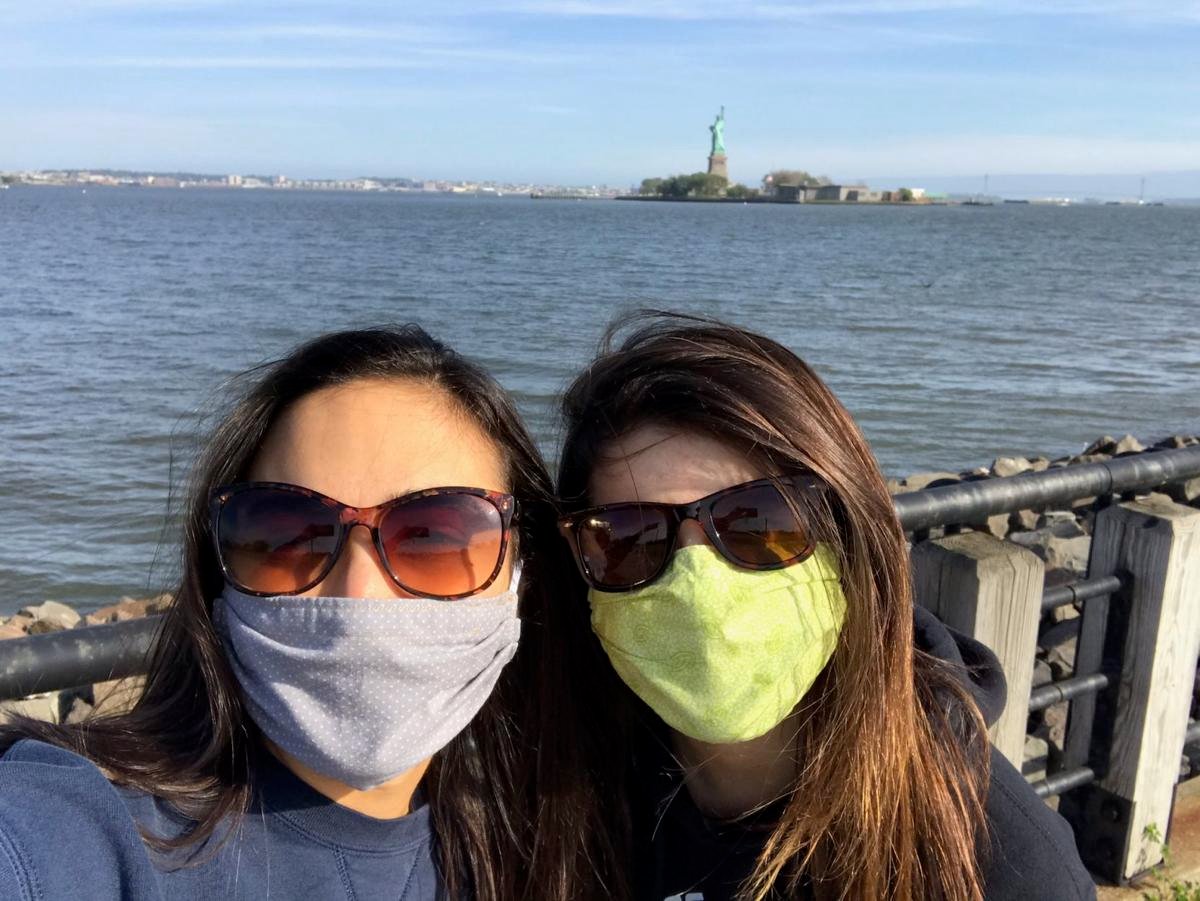 Carli Lang and Lillie Lamont mainly worked during their two months in New Jersey, but did get a few chances to sightsee and poise for a selfie outside Ellis Island.

Lillie Lamont and Carli Lang returned to Vinton in time to take part in graduation after two months working as CNAs in a New Jersey COVID hospital.

Carli Lang and Lillie Lamont mainly worked during their two months in New Jersey, but did get a few chances to sightsee and poise for a selfie outside Ellis Island.

A month in New Jersey passed as Lillie Lamont and Carli Lang settled into a routine. Grocery shopping, shopping, the girls learned how to live independently amid the tense work at a hospital in New Jersey. As school began to wind down and their assignments were completed, their time opened up slightly.

“One day Lillie and I are completely dependent on our parents and then boom, we’re out in the world by ourselves,” Lang said. “It was a lot of growth for the two of us. Ready or not, we had things to take care of not with our jobs, but also life in general.”

Their quarters were in an extended stay hotel, which began to feel like a second home to the two Vinton natives. While they knew their stay was limited, the girls hung pictures on the fridge and did little things to make the space feel more “homely” during their time in New Jersey. They had a full kitchenette and appliances, a small living room, a bedroom with a tv and bathroom.

“It was perfect for the two of us because we still had space to spread out when we wanted to,” Lamont said. “We also had a small outdoor patio, so we’d sit outside when it was nice.”

A reasonable commute to work also made their living arrangements work. They continued working 12 hour shifts as the hospital slowly began to manage their patient care. That did not make the sights and days around COVID patients easier to witness firsthand for Lang and for hospitals to adapt.

“Regardless of people’s personal opinions about COVID, it’s still like a very destructive virus,” Lang said. “We not only see what it does up close, but how hospital staff had to change their practices, how it affects economies. It was hard to see how chaotic it could be at the hospital and know this is happening at other hospitals as well.”

For much of their time in New Jersey, the duo never went anywhere. Most tourist attractions and food places were closed due to COVID-19. As the spread slowed down, the girls did find time to explore parks and go hiking as a stress relief. Everywhere they went, they wore masks as they were mandatory. According to Lamont, police would stand outside of Target and make sure you entered with one on.

“Towards the very end of our stay, we took a mini road trip, but it wasn’t all touristy like you’d think,” Lamont said. “We weren’t seeing the nightlife. We were going to parks and might not see anyone for miles at a time. So we did get to sight see.”

While they were focused on work, news from home was heavily on their minds. When school officially closed and spring sports were cancelled, Lamont admitted she was sad for her friends eager to compete. Lamont herself was a WaMaC West individual golf champion, but decided even if the season were to resume that she would make this journey to New Jersey. Lang was also a member of the Vikettes golf team and was sad for her friends back in Iowa.

“It almost felt like we had left those people behind in a way,” Lang said. “Lillie and I had just taken off on this whole new project. I think we accepted the fact we weren’t going back to school because of our job. Patients would tell us they feel bad, but I’d tell them this is more important.”

Both agree they missed the people back home the most and the small-town feel Iowa provided as opposed to the big city.

“It’s definitely different out east,” Lamont said. “It’s a lot of little things that are different, like they fill up your gas for you.”

Over the course of the two months on the East Coast, the girls would get letters, texts and messages from home rooting them on and continuing to support them. Lamont stated she didn’t feel homesick for the longest time because of her hectic schedule.

“We went into autopilot mode, just focusing on each day and doing our job right,” Lamont said. “Then our last week when we went on that road trip, it really hit me. We had a few more shifts and then we were going home. During those last shifts, I’d calculate how many hours we’d have left.”

That did not mean the girls weren’t leaving New Jersey on June 14 without a few emotional goodbyes. They developed relationships with coworkers and patients over two months. Phone numbers were exchanged before the girls headed back to Iowa.

“The day after we left, one of my coworkers texted me talking about being short staffed and how horrible it was that day,” Lang said.”Lillie and I just felt bad because we still kind of left them, although things are getting better. The Director of nursing is a hardcore, tough love lady. She gave us her business card and told us if we need anything to reach out to her. As we’re leaving, we saw a different side of them and that was really cool to see.”

As they arrived back in Vinton, both girls felt like they walked back into a different world. They had left while the state was in lockdown and returned as the state continued to open up. Restrictions were heavily relaxed and plans were well in place for a prom and graduation.

“It’s not like COVID disappeared by any means. but everyone is much more laid back,” Lamont said. “We’re not seeing all the police and everyone in masks here in Iowa. Masks are mandated out east. Over here it seems like such a statement if you wear one or don’t. I went to Ehlingers one day to buy worms for fishing and wore a mask. Everyone was staring at me, probably because they aren’t used to seeing younger people wearing masks.”

“When you’ve lived through what I saw in New Jersey, it’s hard to understand how things are so different here,” Lang added. “Masks and the virus are such a heated topic now. It’s hard to know what to do or say.”

“We’re really grateful to the community and businesses for putting this on for the students,” Lang said. “It was different, but it meant a lot to our classmates. I think Lillie and I really were happy to be a part of it and not just see it on social media.”

Two days later, it was graduation for the Class of 2020. While Lamont does see graduation as an important milestone, she admits perhaps the two had mentally already moved on from having a commencement.

“I was expecting it to be emotional for me,” Lamont said. “I had already accepted the fact two months ago we probably wouldn’t have a commencement. It still was cool to be there and celebrate the milestone with our classmates.”

Despite the hardship and tragedy they saw in New Jersey caused by COVID-19, Lamont and Lang both will continue to pursue degrees in health fields going forward. Lamont is heading to the University of Iowa to study Biomedical Sciences and Lang will attend Iowa State University to study Biosystems Engineering.

“There were bad times, but for me personally I found the job very fulfilling and made me feel sure I want to go into the medical field,” Lamont said. “I think we both learned more about ourselves as individuals, how to live on our own and how we deal with stress.”

Lang noted the diverse, strong environment she worked in during their time in New Jersey and how the staff remained strong as the world turned bleak.

“It didn’t matter where you came from or what you brought to the table, people supported one another with love and kindness,” Lang said. “Going to New Jersey definitely didn’t turn me away from the medical field at all. No matter what I’m doing in the future, I really need to be actively helping other people.”

Cloudy skies. A stray shower or thunderstorm is possible. Low 61F. Winds SSE at 5 to 10 mph.