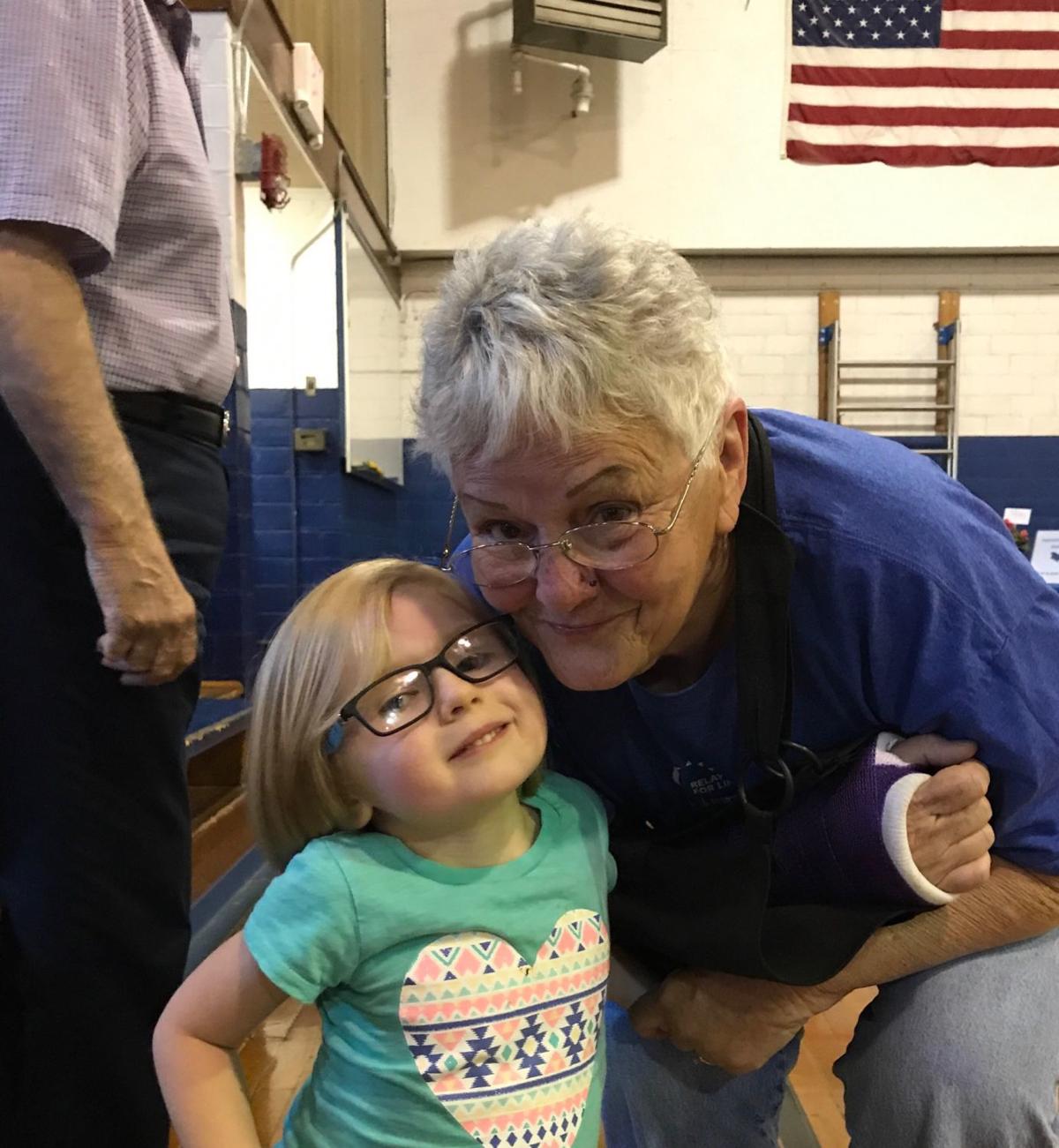 Elizabeth Arnold and Sally Donald. Elizabeth referred to her neighbor as “My Sally.” 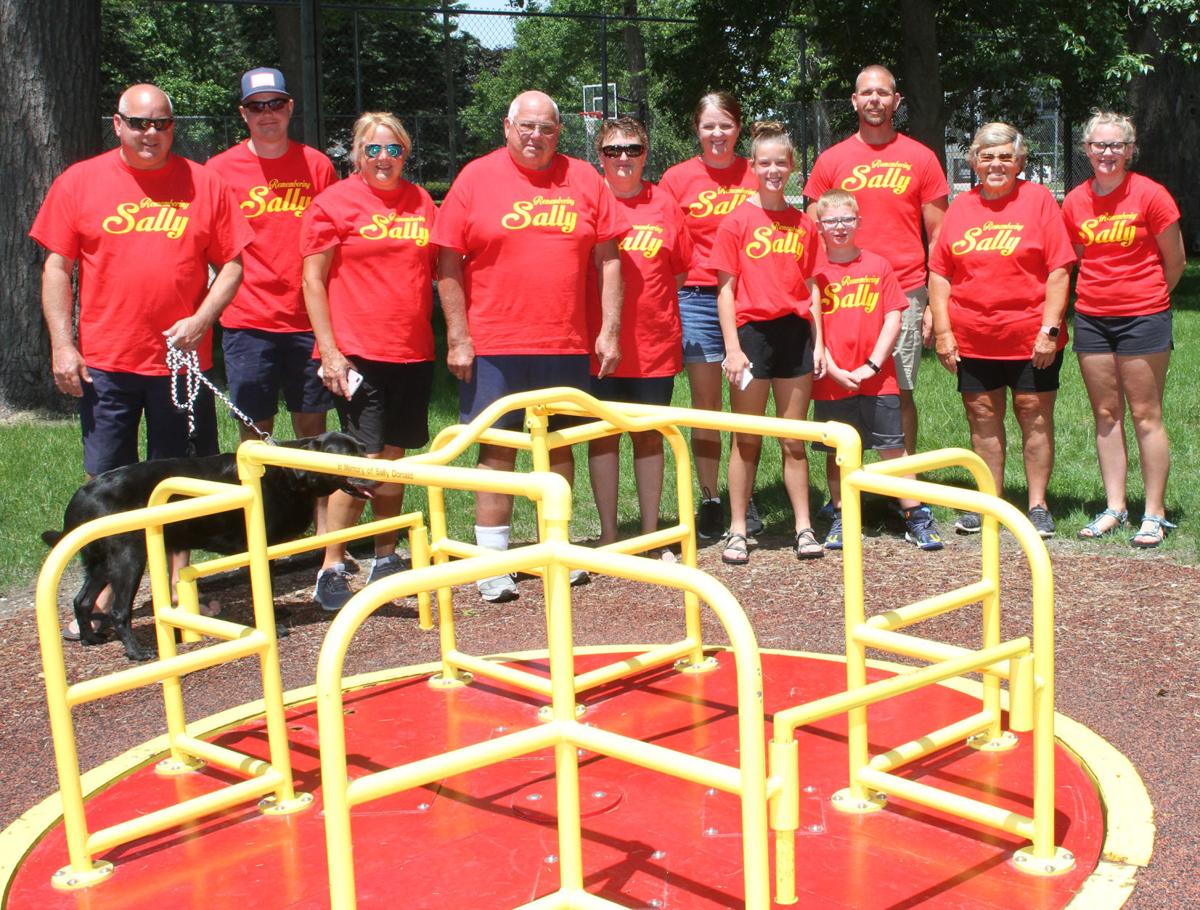 The Donald clan poses with the new handicap merry-go-round in the Van Horne City Park. Ron Donald is pictured in the center.

Elizabeth Arnold and Sally Donald. Elizabeth referred to her neighbor as “My Sally.”

The Donald clan poses with the new handicap merry-go-round in the Van Horne City Park. Ron Donald is pictured in the center.

Sally Donald loved everything about Van Horne, according to those who knew and loved her. The churches, the library, the park in town. She was a first responder for 20 years and as husband Ron Donald put, a caring heart.

“It was natural for her,” Donald said. “I remember she told me being a first responder wasn’t about the medical part, but the comfort. She knew it was important to take care of people”

Sally lost her battle with cancer in 2018, but her presence is felt today thanks in part to a family visit to Zearing several years ago. While in the park, they saw a newer obstacle course setup. Back in Van Horne, the town park was steadily losing its equipment due to old age and not meeting insurance regulations. When she returned home, Sally spoke with the local Lions Club and city council about adding new equipment back to the Van Horne park.

But another topic came to her mind: accessibility. Her inspiration came from their next door neighbor, Elizabeth. The sacrum and tailbone in her back did not form properly and she is missing a part of her spinal cord. With the help of braces she can run and walk and she does gymnastics, just like any other girl.

“Sally was always so impressed with how Elizabeth approached things even from when she was an infant and couldn’t talk,” Dawn Arnold, Elizabeth’s mother said. “As Elizabeth got older, she began to see some of the things that maybe she didn’t have the opportunity to do like other kids did.”

Defying those odds served as an inspiration to Sally and she brought up a serious subject with her husband. As her health began to fail, she asked that any memorial money used after her death go to numerous projects, including a handicap merry-go-round.

“The family wanted something lasting in the park and that’s what she basically selected before she had passed away,” Van Horne Mayor Marty Junge said.

Junge and other business leaders took charge of the construction of a new ninja obstacle course at the playground and then the installation of the handicap merry-go-round this year after several delays. This merry-go-round is at ground level with soft mats around it for fall protection.

A dedication had previously been planned for earlier this year, but was pushed back by COVID-19 concerns. Finally on June 7, family members, friends and city leadership gathered in the park for a dedication of the donated merry-go-round in Sally’s name. Attendees also took a walk around the park in memory of Sally and her involvement with Relay for Life.

“Sally Donald was a figurehead in our community,” Junge said. “Whenever anybody needed anything done Sally was there to do it. This merry-go-round will always be in her memory.”

Elizabeth was among the first to enjoy the new playground addition during the dedication. While the merry-go-round lives a physical reminder of Sally Donald, her memory lives on in Arnold’s mind beyond any playground equipment.

“Sally was much more than just a neighbor to us in a lot of ways,” Arnold said. “She battled breast cancer a few years before I did and she was a huge support to me. As I got better, she got worse again. Just the fact she thought of Elizabeth that much to be able to do this, that says a lot about her character. Even if we didn’t know Sally personally, I get the feeling she still would have done something similar.”

Donald hopes this donation reminds the community that every child is important, and their physical and emotional needs should be met.

“We’re proud of our park and there’s a lot of people who have provided things to make the Van Horne city park better,” Donald said. “I have seen young people use the new equipment. Sally loved to support people and would have loved to see all of this.”

Except for a few afternoon clouds, mainly sunny. High near 90F. Winds light and variable.