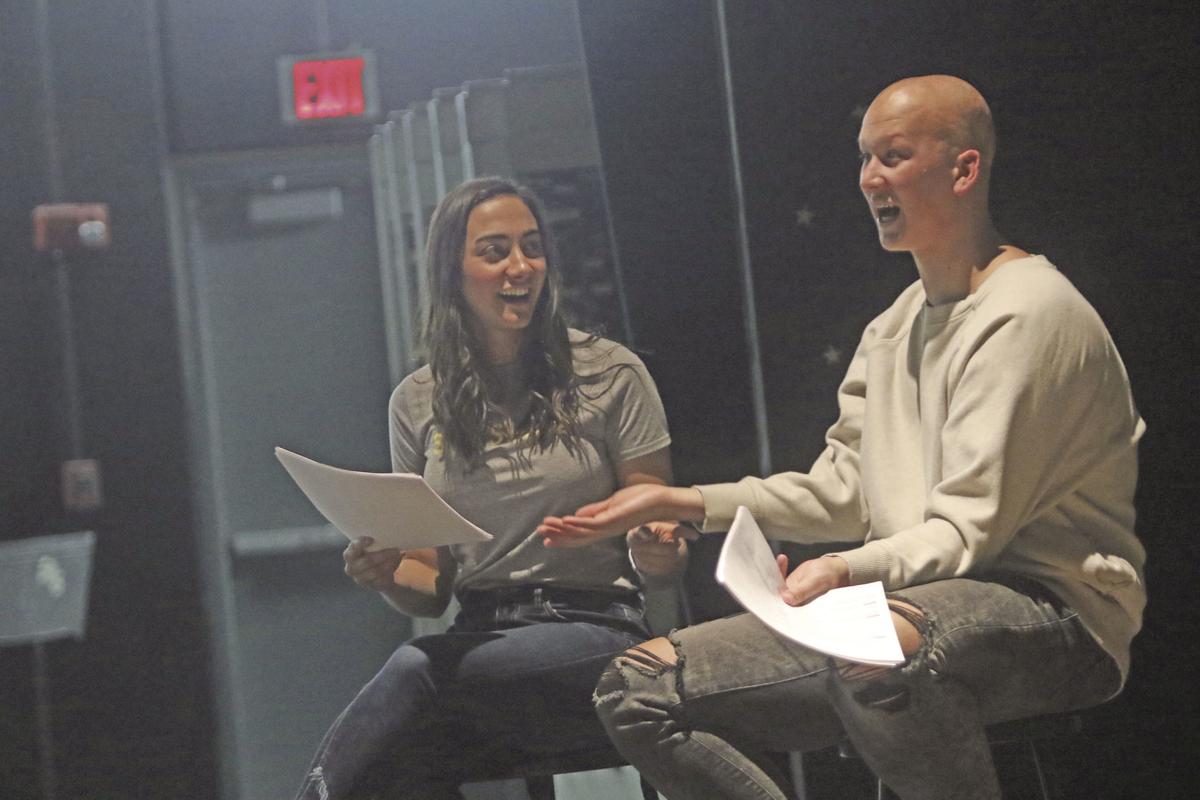 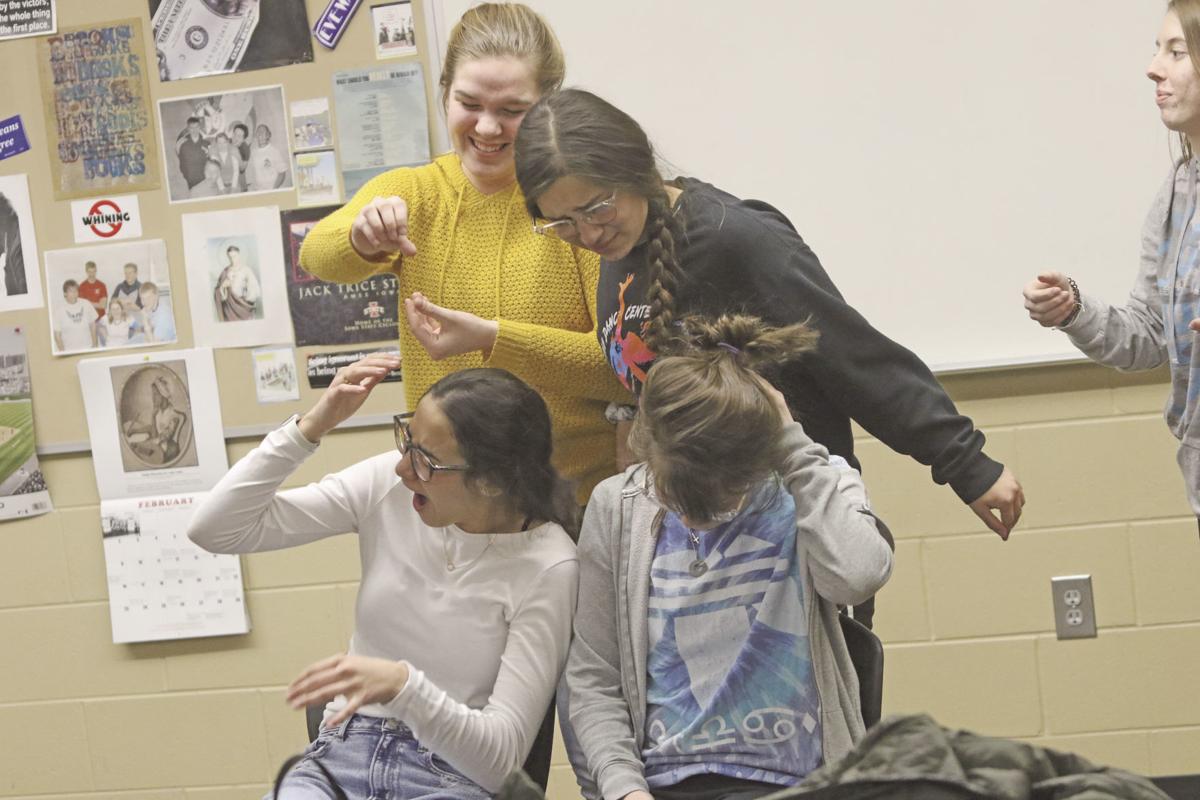 Large Group Speech is well underway from Vinton-Shellsburg as eight groups will travel to Cedar Rapids Washington on Saturday to compete in the State Contest for a chance to perform at the All-State Festival later this month.

“I was really happy to see eight groups go on, especially the readers theatre because we hadn’t practiced it a lot,” Le Cox, the speech coach said. “We have a wide variety of groups going on from readers theatre to group mime to short film. Kids can be involved in speech no matter what other activities they do.”

The students performed at Montezuma High School two weeks ago, a smaller district that allowed Vinton-Shellsburg the chance to avoid “overwhelming crowds”. Cox is coaching her 31st season of speech, a job she jokes requires “insanity” because of the long hours. Despite the amount of work and effort it takes, Cox was excited to work with the amusing group possible: speech kids both old and new.

“When the season started, we had a lot of new people out who had never done speech before, but then we also had people who had done it before,” Cox said. “I wanted to integrate and mix experience together to make these groups.”

Among these eight groups is a readers theatre, an event that places performers together to read from a script, drawing on elements such as expression, comedy, and literature. Eli Powers is one of two narrators for a twisted take on the Brothers Grimm fairy tales alongside fellow junior Carli Lang. .

“I’m the wacky, wild narrator that interrupts a lot,” Powers said. “I give the funny side of a story. It’s hard to stay in character during performances because my lines are pretty funny.”

Keira Ott got a taste of State last year with speech and was excited to return to Large Group Speech this season with more of her close friends involved. She joined readers theatre when it was originally slated as a one act play, a longer production that requires memorization. According to Ott, 15 students were involved with the group at one point before scheduling conflicts arose. As students became unable to attend practice, Ott watched as Cox changed the category to meet the needs of a smaller cast. Roles were changed and the new category meant they had to cut down their time significantly.

“We literally made the change two weeks before Districts,” Ott said. “We had to cut some much stuff in order to make the time limit. One of my scenes was cut out entirely. But, I feel like this is so much better than our one act play because we didn’t know our lines.”

Ott and the other performers were “surprised” when they made it through Districts and selected to perform at State. They were the last performance of the day and were ecstatic to leave Districts after seeing they had made it. The readers theatre have taken advantage of the two weeks between Districts and State to rehearse after school on stage and enjoy the production.

“I like Eli’s parts because they are so funny,” Ott said.”I convinced a foreign exchange student from Thailand to go out for speech and she’s perfect for her roles.”

Large Group Speech features a variety of different categories as implied by Cox. Among those categories is short film, where a group develops and edits their own video. Lauren Murray and Josie Sagan also watched their group shrink as Districts approached. Both girls had an idea for a video that quickly disappeared in front of their eyes.

According to Sagan, they only had a few days to “procrastinate” a video, which ironically led to the subject of the short film. The two juniors transformed their struggles into a hilarious take on procrastination, from singing in the kitchen to playing ping-pong with Guitar Hero controllers.

“I guess the fun of it was being able to be creative and show kind of the struggle of procrastination, but also include humor in it,” Murray said. “It’s not just the issue of procrastination but more of making it into something entertaining.”

At Districts, Sagan watched other short films before theirs and noted how other groups took a more serious, scripted approach. Making State was far from both girls’ minds. When they presented the video, however, the judge laughed at their piece and noted how fun it was.

“It wasn’t very stressful once we had like a set plan,” Murray said. “You have fun and you record it. It didn’t feel like a job or something you had to get it done. It felt like you’re just having fun.”

Readers theatre and short film are two categories unique of each other, yet group mime adds another wrinkle to Large Group Speech. Miming involves telling a story without any words. Instead, acting and pre-recorded music bring the presentation alive for the five friends that make up Vinton-Shellsburg’s group mime: Sam Walton, Zena Aragon, Morgan Lang, Natalie Armstrong and Megan Hedrickson.

“Our story starts out with three people who are bullies and bully the other two girls in our group,” Walton said. “In a daydream part, the roles are switched with the bullies then being bullied. In the end, we are all friends living happily ever after.”

Walton explained the group enjoys rehearsing in a “lowkey” practice environment, where they work on facial expressions, acting and running through their blocking on stage.

“The people in our group are fun to work with and it’s not stressful,” Walton said.

Cox serves as their instructor after school and plays the music for them, yet the five girls have mainly created and acted out their piece independently.

“They did most of the work themselves because they were working with Mr. Upmeyer, one of the assistant coaches, and just had his hip replaced,” Cox said. “They came up with the idea, the music and I’ve only been with them a short time.”

Cox noted that eastern Iowa has the largest participation for speech in the state, including the most entries and the most students involved overall. While she believes the environment at State will be a lot to take in, her message to the students “is to have a good time and do their best.” That’s exactly what students like Powers plan to do.

“I’m excited to perform Saturday because I think we have a good chance of going to All-State this year,” Powers said. “Everyone is really excited to go and we’re all going to do the best we can.”

Results from area schools competing at Large Group State Speech will be published in the Vinton Eagle on Monday.