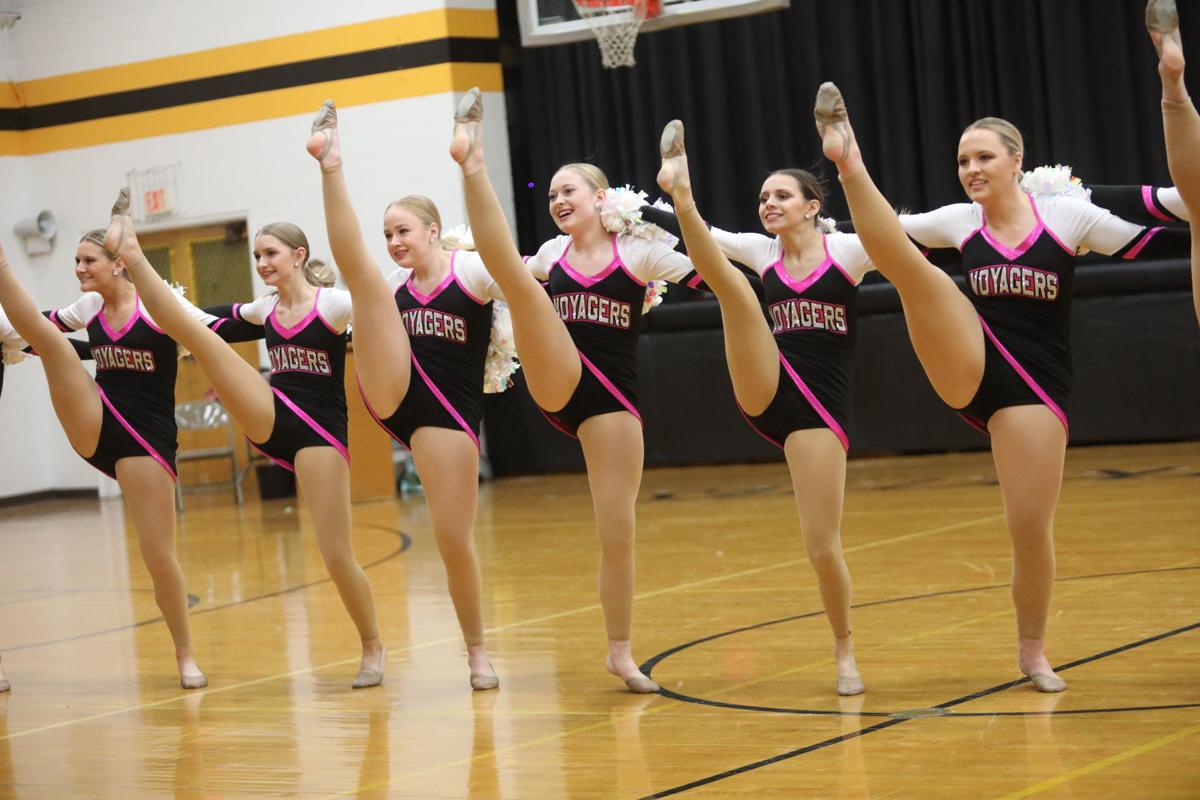 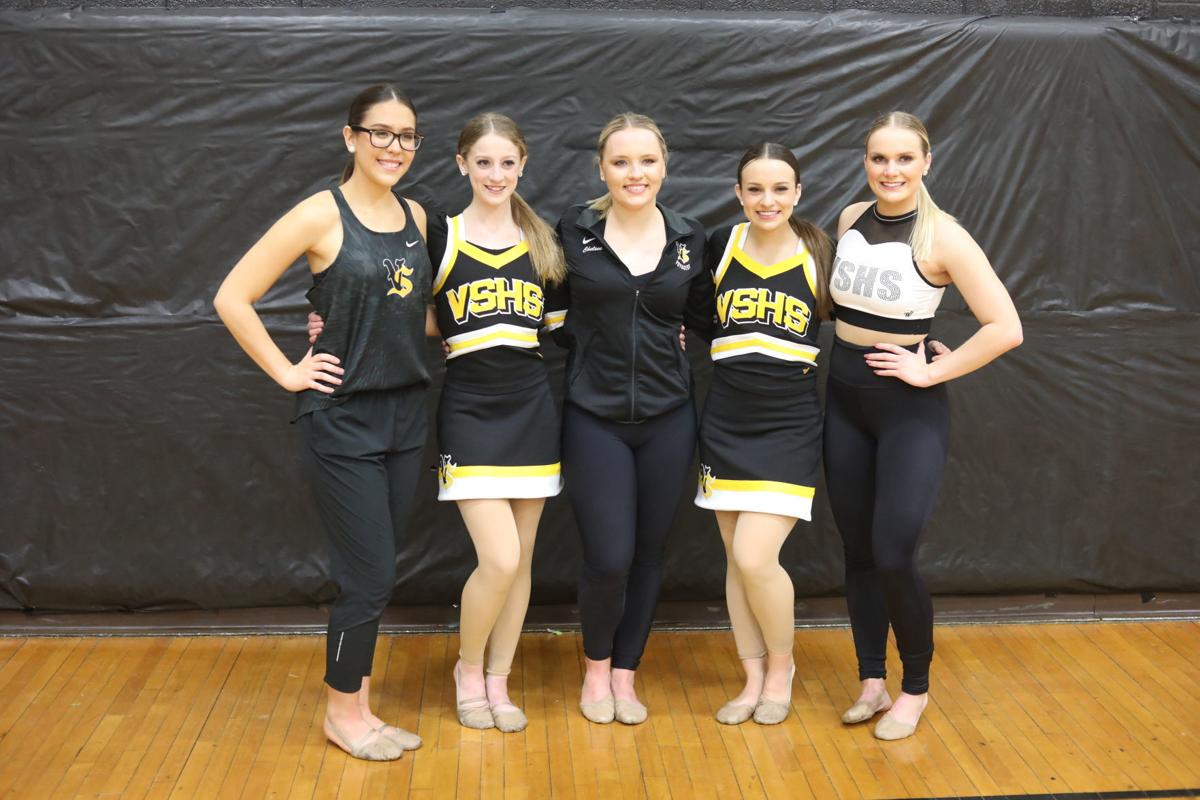 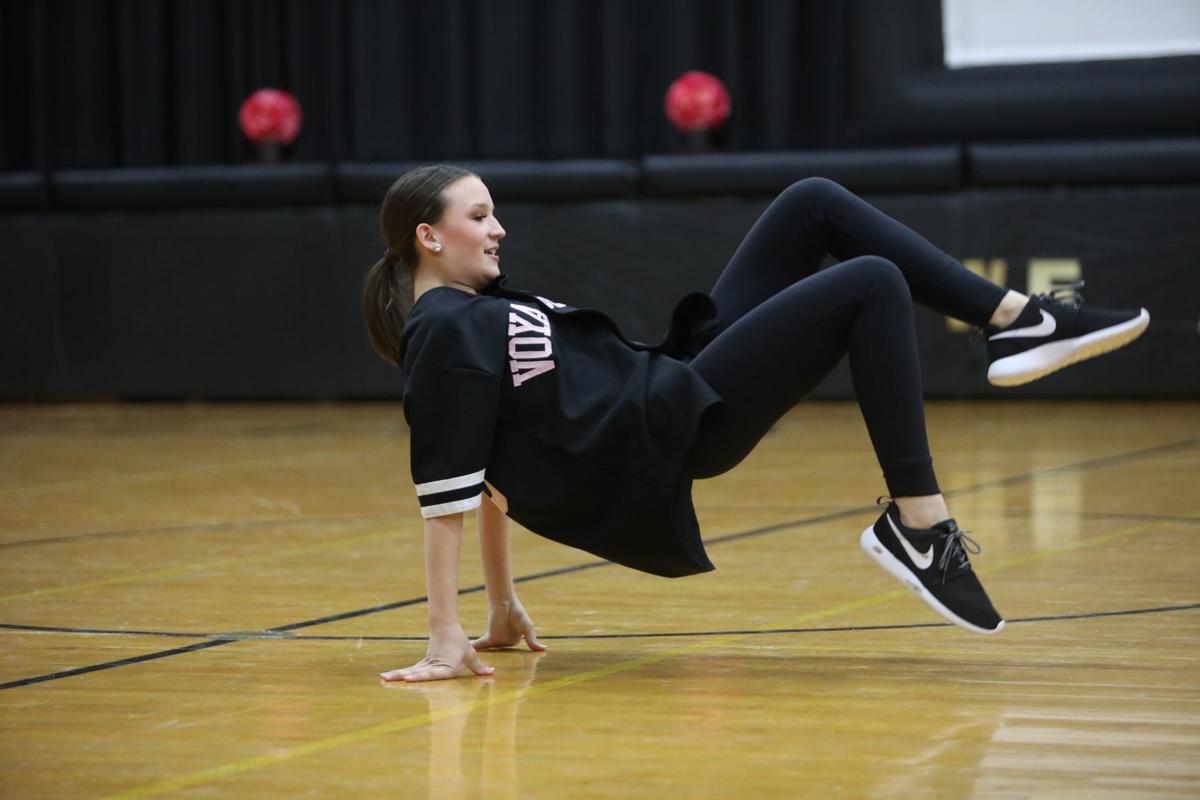 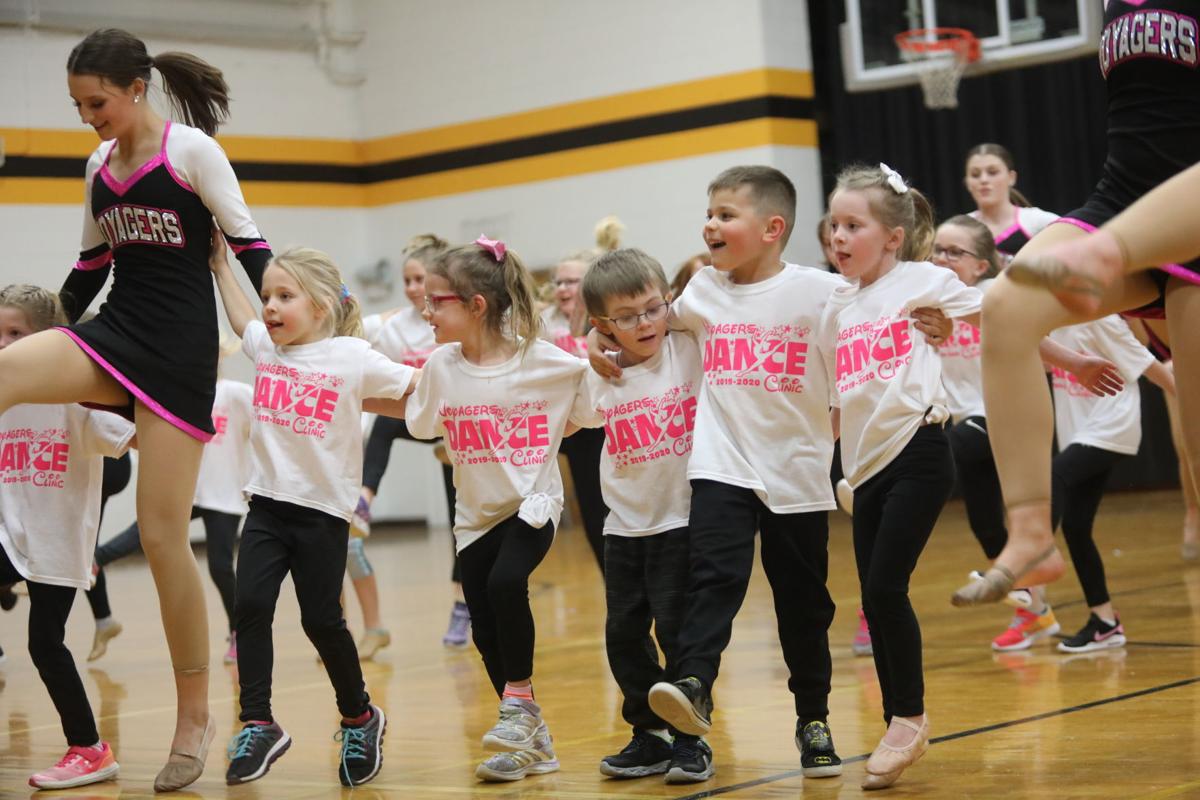 The Voyagers Dance Team hosted a children’s clinic earlier in the day before performing together on stage for the spring show. 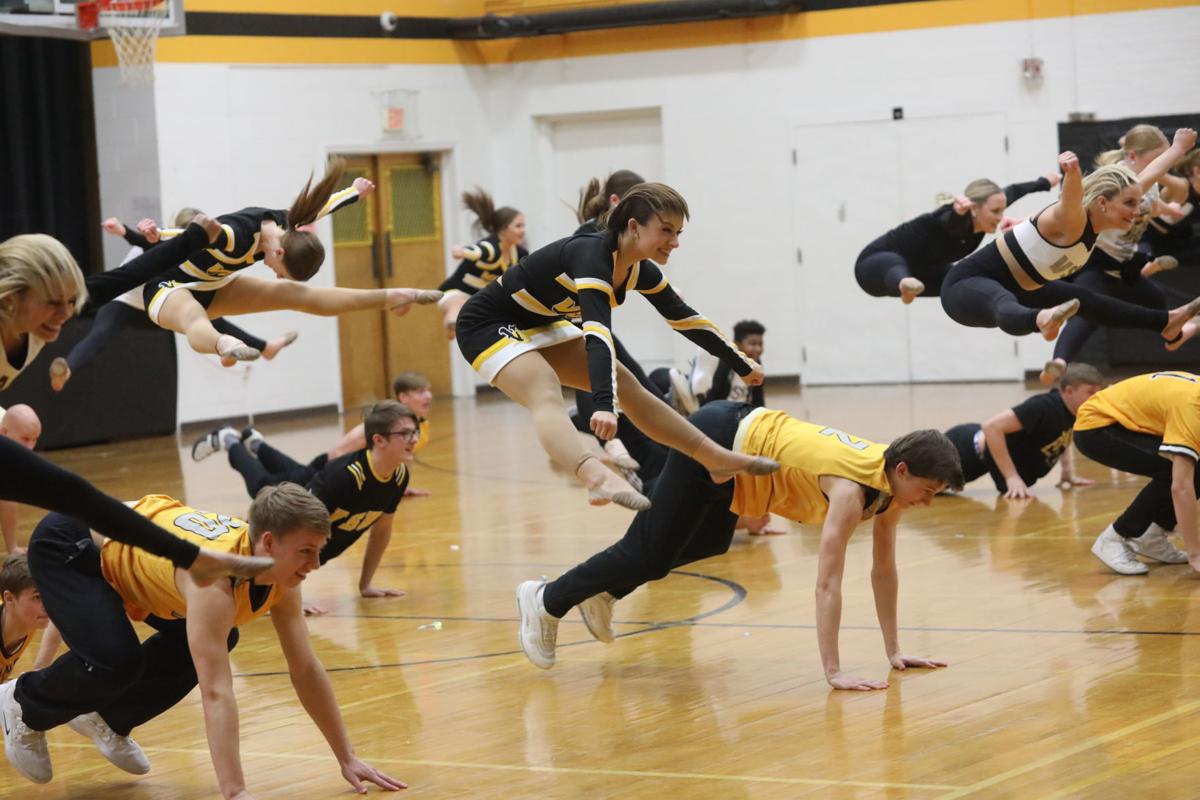 “We’re all in this together.” The Voyagers Dance Team partnered up with classmates for a “High School Musical” co-ed dance to conclude the show.

The Voyagers Dance Team hosted a children’s clinic earlier in the day before performing together on stage for the spring show.

“We’re all in this together.” The Voyagers Dance Team partnered up with classmates for a “High School Musical” co-ed dance to conclude the show.

Vinton-Shellsburg Voyagers’ Spring Show on Saturday was an evening of electrifying choreography, memories, a few tears and a send off for five seniors in the program.

“Tonight is pretty emotional and fun because we’ve been dancing with each other for four years,” senior Leah Bohnsack said. “All the relationships we’ve built, everything about dance, made this year so much fun.”

Saturday’s spring show began with recognition of each dancer and their families, followed by awards, thank yous and recognition to the parents.

“The parents are super supportive,” Voyagers coach Michelle Wedemeyer said. “I’m very fortunate to have a group of parents that are always willing to help me. I haven’t had a single issue with a parent. They’re always willing to do whatever they can to help their dancers and to help me because they care about the season just as much as I do. They want to do whatever they can to support it in any way possible.”

Voyagers kicked off their 2019-20 season by rehearsing in the summer, specifically working on their technique and preparing for State late November. Over the course of the school year, the dancers would also learn choreography for shows performed at football and basketball games. By the time the spring show comes around, the girls have memorized all their routines and performed them for family and friends gathered in the middle school gym.

“Dance is a very mental sport,” Wedemeyer said. “Like the girls were saying, we start routines in the summer, through fall and winter season. I have high expectations, so they do a lot of the work outside of practice. We videotape everything, so they know exactly where to go to review and a lot of the work is done outside of practice. When they come in for practice, I expect them to know the routine. And then, my part is just cleaning and polishing, maybe messing around a few formations if we have to. But they come in knowing everything at a time.”

For their first competition of the season, the Voyagers were represented by junior Marjorie Davis at the State Solo Competition in early November. Davis was awarded a Division I rating for her hip hop performance and also performed the solo on Saturday. In November, the team attended the Xavier Dance Jam, a local dance competition prior to State. The team placed first in Hip Hop and first in Pom. They were also received a Judges Choice Award for their Hip Hop performance. The team had one final tune-up at the Clear Creek Amana Showcase in late November, where they received an award recognizing their “high energy” in all three routines and multiple awards recognizing their “high-quality performance of their hip hop and pom routine.”

“Our coach really pushes us to do our best and really emphasizes the crowd is there to support,” senior Alyssa Reynolds said. “We’re there to show them what we have been working on for so long.”

“I always love State, and the girls know that I’m always readying us for the State performances,” Wedemeyer said. “Despite what placings we got, we’re happy with every single performance I put out on the floor. This is our third season finishing top five in the state with all three routines.”

The team and their guests relived the memories of preparing for State through various slideshows between performances.

“I think sometimes people don’t always see what hard work we do,” Wedemeyer said. “They see what the final product is. It’s some hard work, but we can say we are pretty good and can hold our own against other teams.”

One by one, the whole team and competition squad worked their way through the material from throughout the season. Yet the stars of the show were the five seniors: Amanda Cardenas, Bohnsack, Kailey Lazenby, Reynolds and Chelsee Tharp.

“It was really fun and upbeat all night, and I felt like the crowd really got into our performances,” Reynolds said. “We really appreciate that support and that they came out to see our last performance of the season.”

Their night ended with a senior dance and a performance of their award-winning State routines. The seniors left it all on the dance floor with a coed performance, a favorite of Reynolds. However, it was the senior memories that got Bohnsack teary eyed

“The most memorable part of tonight for me was the senior dance,” Bohnsack said. “Also, the video before it and the support our teammates show us made everything very emotional.”

But Bohnsack wasn’t the only one getting emotional on the night. Wedemeyer came to Vinton-Shellsburg four years ago, when Bohnsack and Lazenby were only freshmen. Saturday came full circle as they walked off as seniors.

“This spring show it’s definitely bittersweet,” Wedemeyer said. “I’ve known them for all four years and just picturing where they began as a freshman to now, the growth is substantial. I don’t cry and I don’t get emotional. The girls make fun of me for that, but watching that senior video and then watching them get emotional about it that definitely got me a little choked up this time.”

Wedemeyer took the time to talk about each individual senior after two and half hour show, tired yet proud of her seniors.

“As a whole, these seniors are very motivating and supportive,” Wedemeyer said. “They all make great leaders, Leah and Kailey have been with me from the very beginning they did all four years, and they’ve really stepped into that leadership role their senior year. We are glad to have Alyssa back. She has a great technical foundation and a very positive mindset, so she was a great addition to the team her senior year. Chelsea Tharp has also been with our program for awhile. She’s very strong and aggressive with her style, which is great. That’s definitely something that I relate to with my style. It’s great to kind of play around with her and different routines because she can do a lot of different things. For Amanda, this is actually her first year dancing entirely and then specifically on the team, which I find her very brave for doing that. I don’t know if that’s something that I would be able to do myself. The fact that she was able to kind of jump into all these different styles that girls have been developing for 15 years and she was able to jump right in is pretty impressive.”

Family and friends flooded the gym floor afterwards for final pictures, hugs and words of congratulations between the close teammates.

“I love seeing the girls bond,” Wedemeyer said “There’s not too many issues or drama that might be on other teams. The girls and boys get along very well. It’s nice to see new bonds click, to see the freshmen interacting with the others. From day one, I threw a lot of different and new things at them, and they were very willing to pick up new skills, pick up new styles and were very excited about the new things they were learning.”

Photos from Saturday’s Voyagers Spring Show can be found online at vintonnewspapers.smugmug.com.

Rain showers in the morning will evolve into a more steady rain in the afternoon. Morning high of 52F with temps falling to near 40. SW winds shifting to NNW at 10 to 20 mph. Chance of rain 70%. Rainfall near a quarter of an inch.