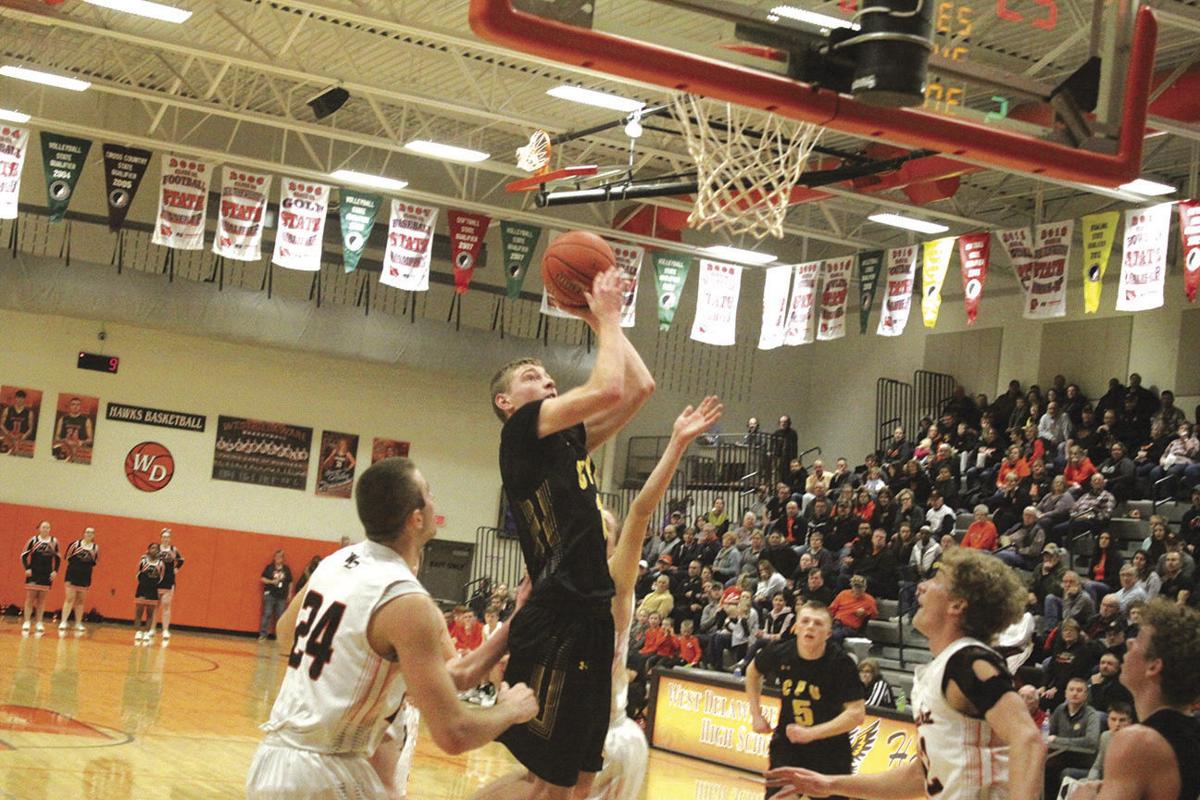 #1 Kole Tupa slices his way past a few West Delaware defenders Thursday. Tupa scored a game high 18 points, but the junior and CPU had their season ended, 45-44. 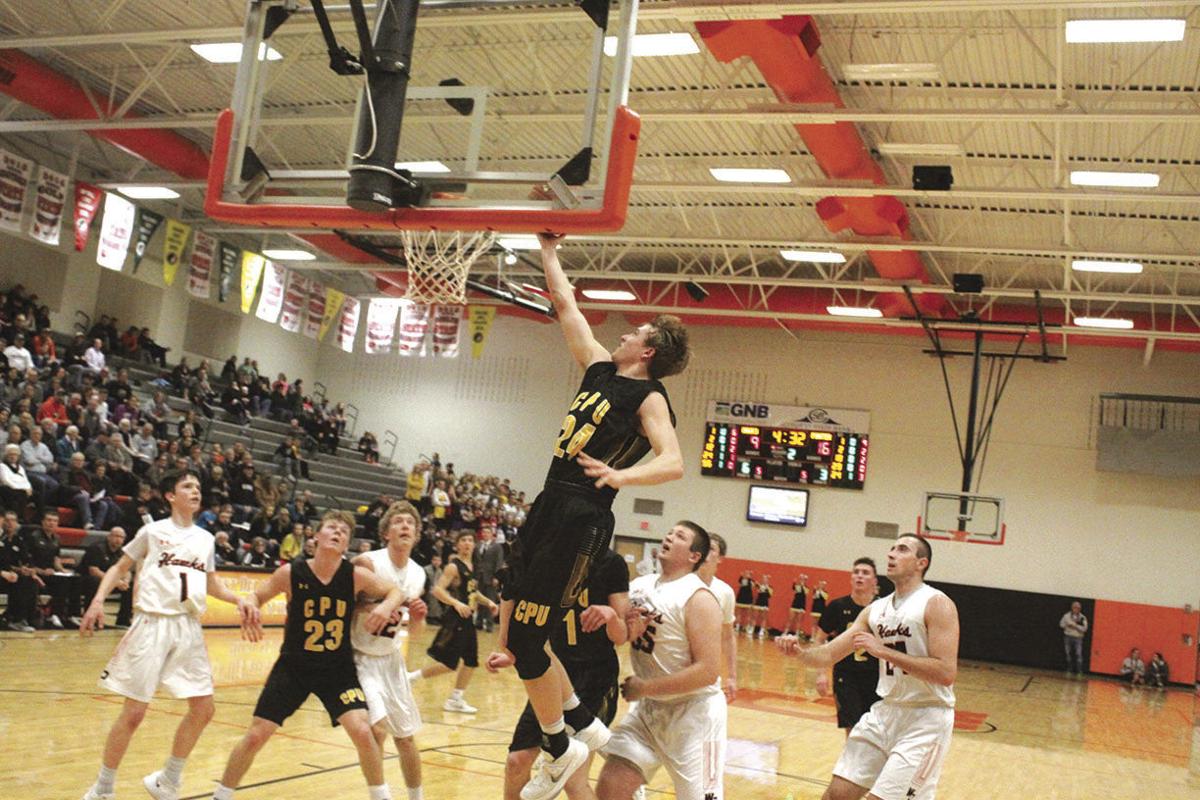 #24 Cody Westcott skies towards the rim for an easy baseline lay up. The senior was able to provide great production in his final career game with seven points and eight rebounds. 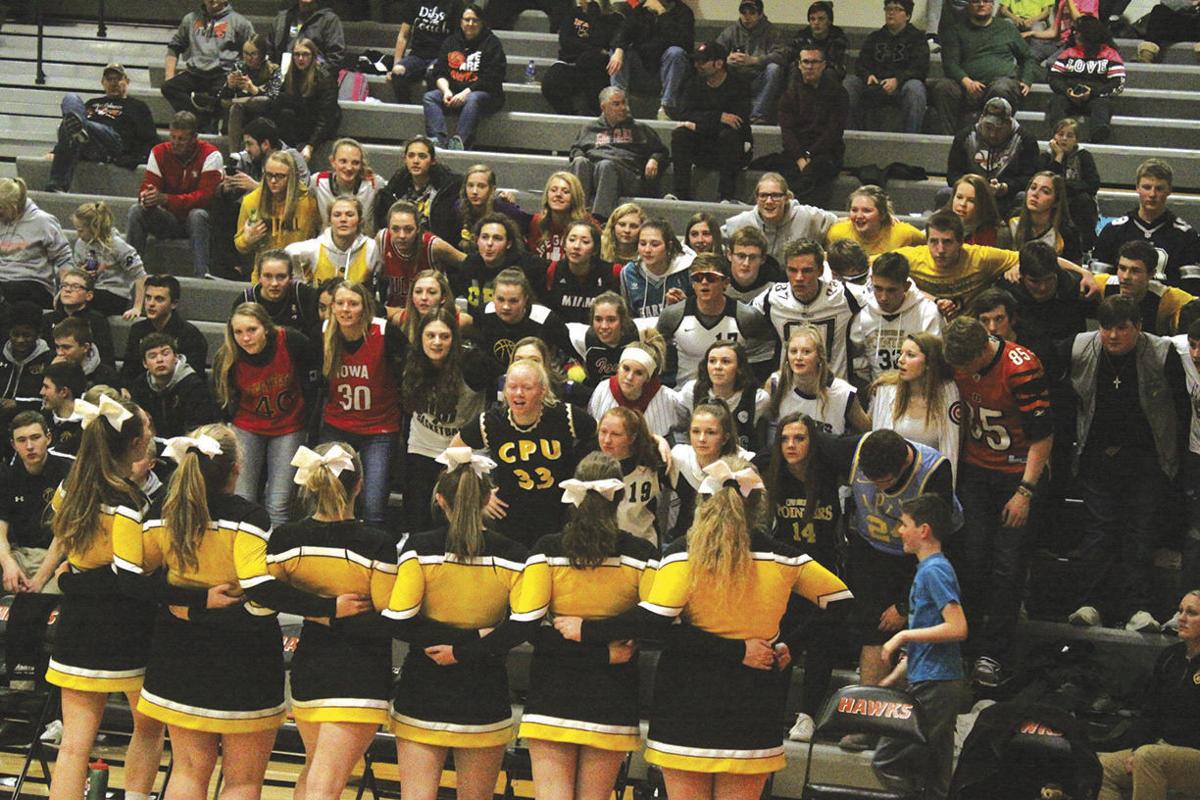 Making the 45 minute drive to Manchester Thursday was a strong student section. It’s expected that attendance will be high again tomorrow at Des Moines as the CPU girls begin play in the State Tournament against West Marshall with a 10 a.m. tip off.

#1 Kole Tupa slices his way past a few West Delaware defenders Thursday. Tupa scored a game high 18 points, but the junior and CPU had their season ended, 45-44.

#24 Cody Westcott skies towards the rim for an easy baseline lay up. The senior was able to provide great production in his final career game with seven points and eight rebounds.

Making the 45 minute drive to Manchester Thursday was a strong student section. It’s expected that attendance will be high again tomorrow at Des Moines as the CPU girls begin play in the State Tournament against West Marshall with a 10 a.m. tip off.

MANCHESTER - After each won their games by 20 plus points Monday, the stage was set for round two between the CPU Stormin’ Pointers (14-7) and the West Delaware Hawks (15-6) in the Class 3A, Substate 3 semi-final Thursday night.

Back on December 7th in Center Point, it was the visiting Hawks that climbed out of a 20-10 halftime deficit to defeat the Stormin’ Pointers via a 36-29 score. Moving forward to the second battle between these great teams, the first half was nearly replicated as CPU led 21-11. However, the biggest question was could the Stormin’ Pointers fend off a gritty West Delaware team this time?

Before getting that answer though, the action began from the opening tip as an Ethan Sells baseline lay up got CPU on the board first a little more than a minute in. On the next possession, freshman Blake DeMoss put the home team on top with a three pointer before senior Gavin Soppe added on with a tough lay up. This put the Stormin’ Pointers down 5-2 early, but with patient offense and stingy defense, they did not allow the Hawks to score again in the quarter, while they eventually took the three point lead with four points by junior Kole Tupa, along with a Caleb Andrews floater in between.

Now ahead 8-5 to begin the second, Tupa struck again, first with a three pointer, then with two free throws after West Delaware’s head coach was given a technical. DeMoss would hit on his second three pointer for the Hawks not too long after, but senior Cody Westcott countered with three of his own and a lay up to stretch the margin to 18-9. Then capping off the scoring for CPU in the first half was Tupa, who had 12 midway through, with a free throw, followed by a short jump shot. The Hawks got a tough lay up by senior Derek Krogmann late, but found themselves down double digits 16 minutes in, 21-11, just like they were in early December.

However, just as similarly, here came West Delaware in the third quarter after each team began with lay ups to start the second half action. Still trailing by 10, sophomore Kyle Kelley cut into the deficit with a jump shot and a free throw before a Soppe steal and lay up forced a Stormin’ Pointer timeout at the 4:08 mark. Now down just 23-18, a Logan Woellert three pointer brought the Hawks even closer, but a Westcott lay up helped CPU snap an 8-0 run by the home team. Unfortunately, it just halted them momentarily as a put back lay up each by Soppe and Jamison Smith saw the scoreboard read 25 all. Senior Cam Hasleiet would collect a rebound and execute a short floater before the buzzer to propel the Stormin’ Pointers back on top by two, 27-25. However, much of the momentum was still in West Delaware’s favor heading to the fourth quarter after a 14-6 margin in the third.

Beginning the final eight minutes of play, it took less than 90 seconds for the Hawks to take their first lead of the game since it was 5-4 early on as Woellert connected on a lay up before Soppe hit the go-ahead three pointer. Over the next minute and change, the Stormin’ Pointers got three combined free throws from junior Alex Wade (1) and Hasleiet (2), but a trio of points by West Delaware kept their deficit the same. Trailing 33-30, CPU was not going down without a fight though as Tupa hit a free throw and Andrews connected on a short floater to tie the game up at 33’s. Following a pair of crucial free throws by Woellert, Hasleiet found success with a lay up off the glass as the hotly contested battle was even once again at 35-35 with a timeout taken at the 3:16 mark.

Coming out of the stoppage in play, Kelley caught the inbounds pass and elevated for a jump shot to give the two point nod to the Hawks. On the next possession, the Stormin’ Pointers did not score even with a one and one chance at the free throw line, but they did foul out Krogmann, the University of Northern Iowa commit that finished with just seven points and six rebounds, well below his season averages of 21.6 and 14.1 respectively. CPU was hoping to use this as a momentum shift. However, it was West Delaware that showed great composure as they took over a minute off the clock and Soppe came through with two big free throws to stretch the margin to four. That lead would get all the way to six, but a put back lay up by Wade brought it back down to 41-37 with 36 and a half seconds left. Needing to foul quickly, CPU sent Woellert to the line, who made both. However, a contested three pointer for Andrews with 18 seconds remaining kept the Stormin’ Pointers at least above water. Over the next 10 seconds of play, Soppe and Andrews each found a point at the free throw line, but the final dagger was another one from Soppe with 4.3 ticks that was just enough to allow West Delaware to escape, 45-44, despite Tupa hitting nothing but net on a half court shot at the buzzer.

“(Kyle) Kelley is great scorer and Derek (Krogmann) down low needs a double team at all times. We wanted to make other guys beat us and they did. (Gavin) Soppe hit four from seven from the field and others made some free throws that their season averages hadn’t proved that, but I give them a lot of credit for stepping up and knocking down shots when they needed to. It was just a great basketball game overall,” said CPU Head Coach Mike Halac.

Providing an excellent impact in a game where defense was spotlighted heavily was Tupa with 18 points, six rebounds, four assists, and two blocks. Andrews also poured in eight points and hauled in 10 rebounds, while Westcott led a senior group that leaves behind quite a foot print with seven points and eight rebounds.

“Our 11 seniors were unbelievable. They make our team run as our players were the toughness and our managers handled everything with day to day operations and were over prepared and did everything we needed,” added Coach Halac. “Our senior group, what we lacked in some areas, we made up in ten fold with pure toughness and grit. I’m still very confident to say this is the best defensive team in the state and our guys have proven it with numbers. There is something special about seniors, especially when you have 11 of them that have given everything to the program. It’s irreplaceable as we’ll be a different team next year and we’ll never be the same because of what those guys gave us.”

CPU finishes the season at 14-8 overall and as WaMaC West champions.

Photos from a Class 3A, Substate 3 semi-final boys basketball game between the CPU Stormin' Pointers and the West Delaware Hawks on February 2…

Partly cloudy skies in the morning will give way to cloudy skies during the afternoon. High near 55F. Winds NNW at 5 to 10 mph.