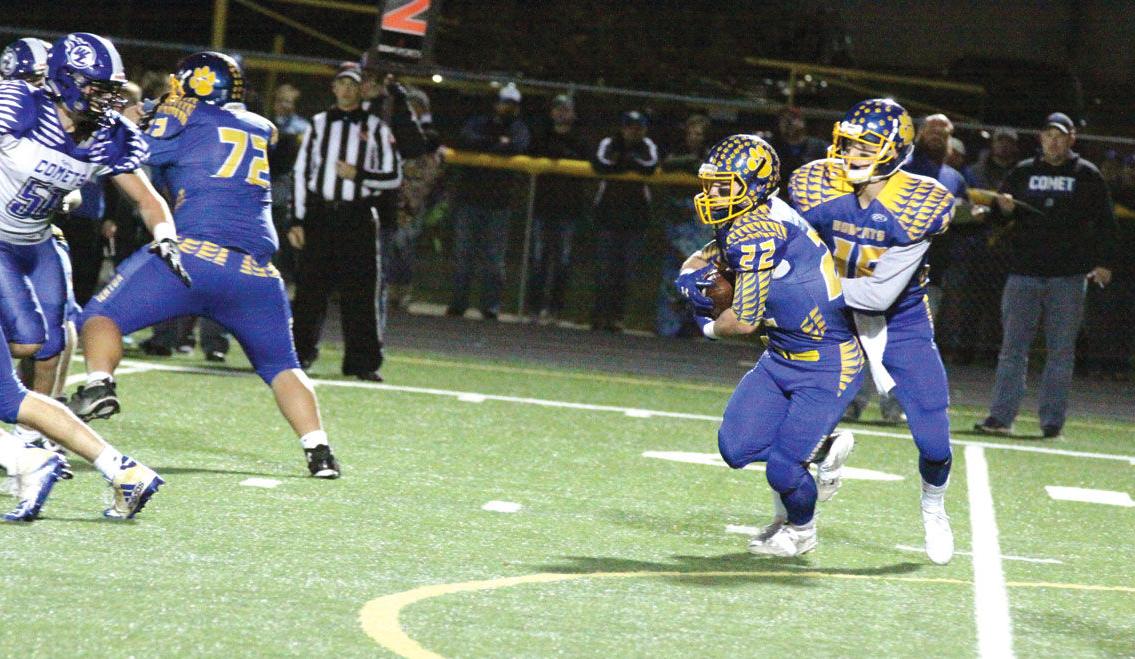 #22 Matt Davis looks for an opening against West Liberty. Breaking five school records and leading Benton to a 9-2 record, Davis was invited to the 2019 Shrine Bowl. 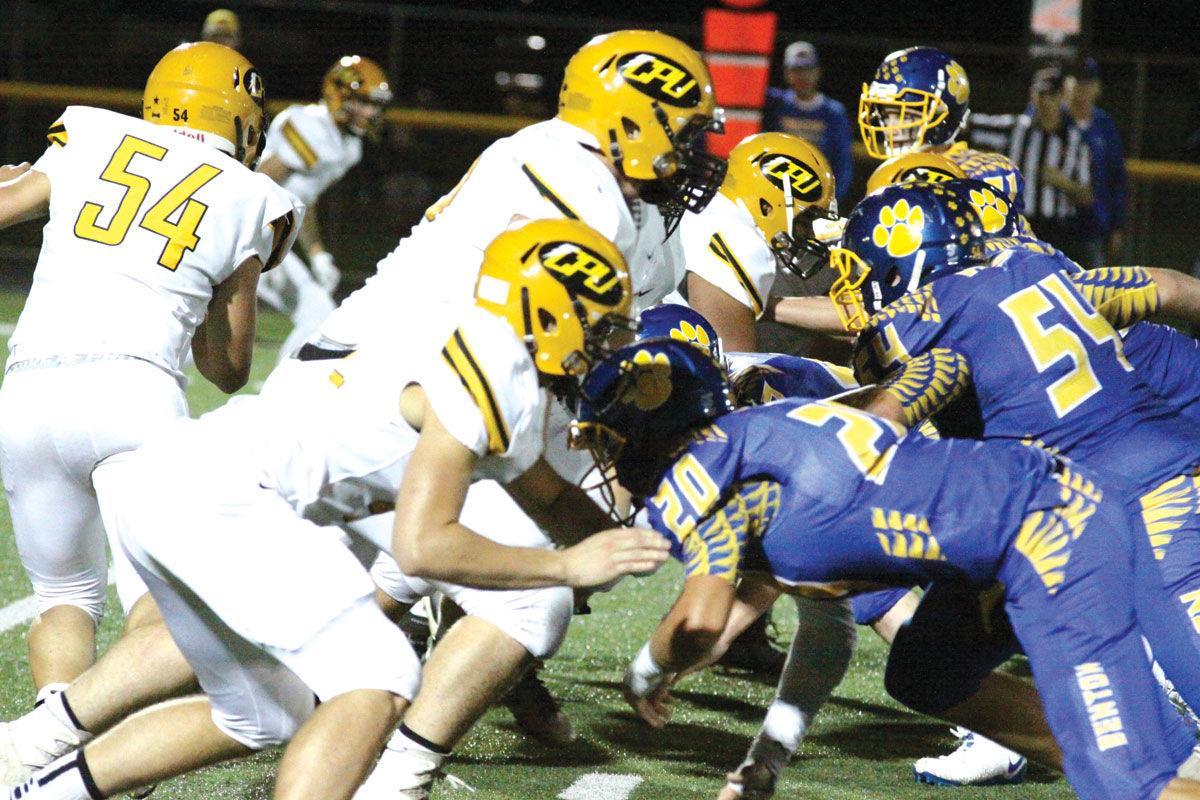 Controlling the trenches: #77 Nick Takes (third CPU player down the line of scrimmage) gets set to absorb contact from a Benton defender. Takes was a 2nd Team All-State center in 2018. 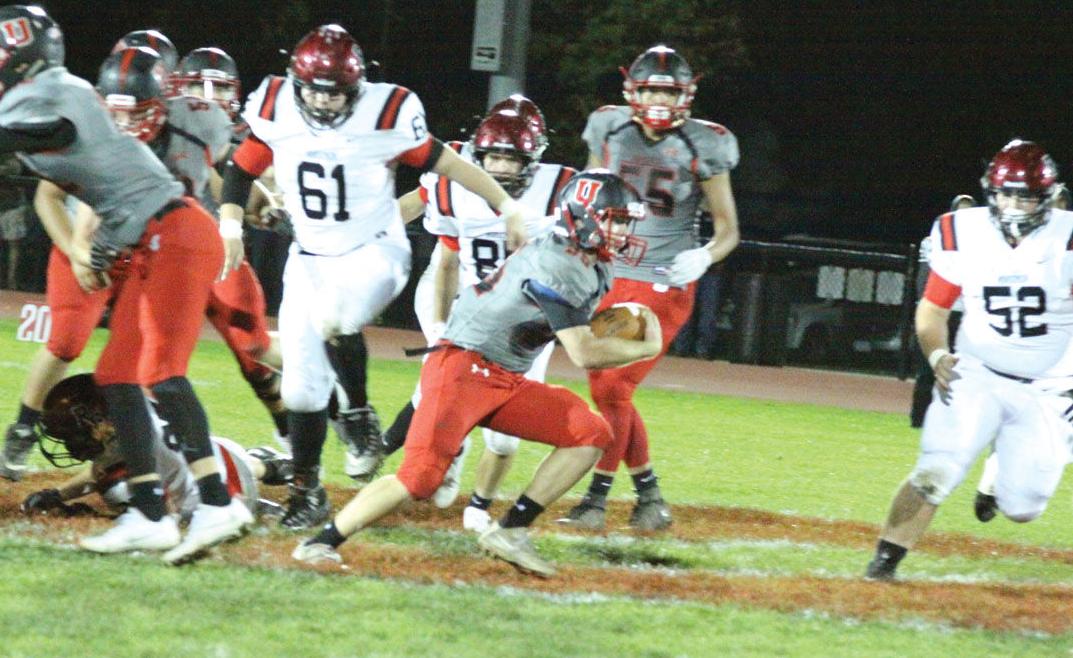 In a game against Roland-Story on September 28, #35 Kaleb Roach ran the ball 31 times for 149 yards and four touchdowns. Roach had 989 yards and nine touchdowns on the season.

#22 Matt Davis looks for an opening against West Liberty. Breaking five school records and leading Benton to a 9-2 record, Davis was invited to the 2019 Shrine Bowl.

Controlling the trenches: #77 Nick Takes (third CPU player down the line of scrimmage) gets set to absorb contact from a Benton defender. Takes was a 2nd Team All-State center in 2018.

In a game against Roland-Story on September 28, #35 Kaleb Roach ran the ball 31 times for 149 yards and four touchdowns. Roach had 989 yards and nine touchdowns on the season.

CEDAR FALLS - The high school football season ended over four months ago and won’t kick back into gear until late August. However, for three local seniors who thought they had put their jersey on for the final time, they will be given one last opportunity to take the field during this year’s Shrine Bowl, hosted at the UNI Dome on July 20th.

The trio of players of Matt Davis (Benton), Nick Takes (CPU), and Kaleb Roach (Union) that will be representing their respective schools played a major role in their team’s success during the 2018 season, combining for a record of 20-10, including postseason appearances for the Bobcats and Knights. Union fell in the first round at Waukon, but Benton earned its first playoff win since 1980 with a 45-20 margin over Greene County before bowing out to West Liberty in round two.

“I knew I had big goals as an individual and I knew the guys beside me had goals as a whole. We felt like we had a next level team, so we were going to prepare for it. Even though we fell short of exactly what we wanted, we made history in the program and I think it will last for a very long time,” said Davis.

Helping the Bobcats to a 9-2 overall record and a share of the Class 2A, District 7 title (4-1) with Union and West Marshall, Davis was named to First Team All-District and Second Team All-State as a running back. Scanning over his statistics, it was not hard to see why he received such high praise. Leading the district with 1,724 rushing yards, the senior also broke school records for a season in rushing touchdowns (28), rushing yards per carry (8.7), points scored (174), and total touchdowns (29). Collectively as a team, Davis contributed greatly to total points scored (353), total offensive yards (4,077), and offensive yards average (370.6) for a season, which were also all school records.

While his spotlight shined bright on the offensive end, Davis was more than capable on the defensive side as well. The senior led the team in total tackles (91), solo tackles (79), tackles for loss (17), and sacks (6) to conclude a terrific career, which Davis hopes to continue at the next level.

“I have such a love for the sport and after throwing in the thought of not playing, I couldn’t put the helmet and pads away,” added Davis. “My college plans are to go through an undergrad with a bachelor’s degree in athletic training. Then maybe after that, I may further my education into physical therapy.”

Before Davis gets to that point though, he will be able to don the Bobcat gear one last time this summer after receiving the great news from Head Coach Kal Goodchild during a workout.

“The incredible news made me lift harder than I ever have and getting recognized for this honor almost brought me to tears. Seeing my hard work in the offseasons and my stats progress into eventually breaking five school records was unthinkable. I knew I was able to accomplish big things, but seeing it in front of me was even crazier,” stated Davis.

Moving from one accomplished career to the next, CPU’s Takes positioned himself not only as one of the best centers (no statistics availiable for offensive lineman) locally, but in the state as well. Following First Team All-District and All-State selections his junior season, Takes repeated as a First Team-All District player this past year, while notching another All-State spot (Second Team).

“Individually, I wanted to go out and do my job at each game and support my team as a captain. As the season started, the goals that I set for myself were to continue to be the starting center, to never miss a game due to injury, to always play harder than the person across from me, and to play for the team and not for myself,” commented Takes.

Using that great mindset, Takes and the Stormin’ Pointers met a team goal as well, despite playing in one of the toughest 3A Districts (4), by finishing with a winning season at 5-4, capped off with a victory over Dubuque Wahlert.

“I will always remember that game because it was my last one on the field. The group of seniors have played together since we were younger, starting with Metro Football. They were a good group of guys to play with and we always had each other’s back,” mentioned Takes.

With plans to join the local Plumbers Apprenticeship after graduation, the CPU senior will strap up his helmet one more time after being told by Head Coach Dan Burke at school that he had been chosen for the 2019 Shrine Bowl.

“I was both happy and proud as throughout the season, I had put in many hours in the weight room and worked hard on the practice and game fields,” said Takes. “I am looking forward to being able to play for the kids that benefit from the Shriners. That’s what it is all about and I’m honored to be a part of that.”

Rounding out the well-accomplished trio was Union senior, Kaleb Roach. Earning the same distrinctions as the previous two local players, which were First Team All-District and Second Team All-State, Roach was highly productive in all three facets. Coming in fifth on the team with 36 total tackles, the senior was also the team’s leading rusher at 989 yards and added nine touchdowns, while being the featured punter with 1,349 yards on 38 attempts (35.5 average).

“Individually, I thought I had a good year and loved playing with the people I did. The offensive line made it possible for me,” stated Roach.

As for the team as a whole, the Knights went 2-2 in their non-conference slate before winning their first four District (7) games. Traveling to West Marshall in the season finale, Union had a chance to become the outright champions, but fell 26-16 to the Trojans. This forced a three way tie for the District crown with the two aforementioned teams and Benton. Then the Knights dropped their opening round playoff match up against a UNI Dome qualifying team in Waukon, ending their season at 6-4.

“My senior year didn’t necessarily end the way myself or any of the team wanted it to, but I’m glad we had such a great class of 21 seniors that I knew I could rely on,” commented Roach.

While sports and where he’ll attend college are still undecided for Roach, who plans to enter the field of exercise science, he knows one thing for sure and that is that he will be competing at the 2019 Shrine Bowl after receiving a call from (former) Head Coach Joe Hadachek.

“I wouldn’t have been able to do it alone, so me going represents the rest of the team and I owe it all to them and the coaches,” said Roach. “Coach Hadachek was a big part of me making it. He was always the person to push me and gave me every opportunity to succeed because he knew I could. I am beyond lucky to have been able to play under him for the past four years.”

Congratulations to Davis, Takes, and Roach as they will represent locally on the North Squad for a game against the South on July 20, 2019 inside the UNI Dome. Also having an opportunity to be included in the festivities this summer are CPU’s Dan Burke, who is on the North coaching staff, and Benton's Maya Sahu on the cheer squad.