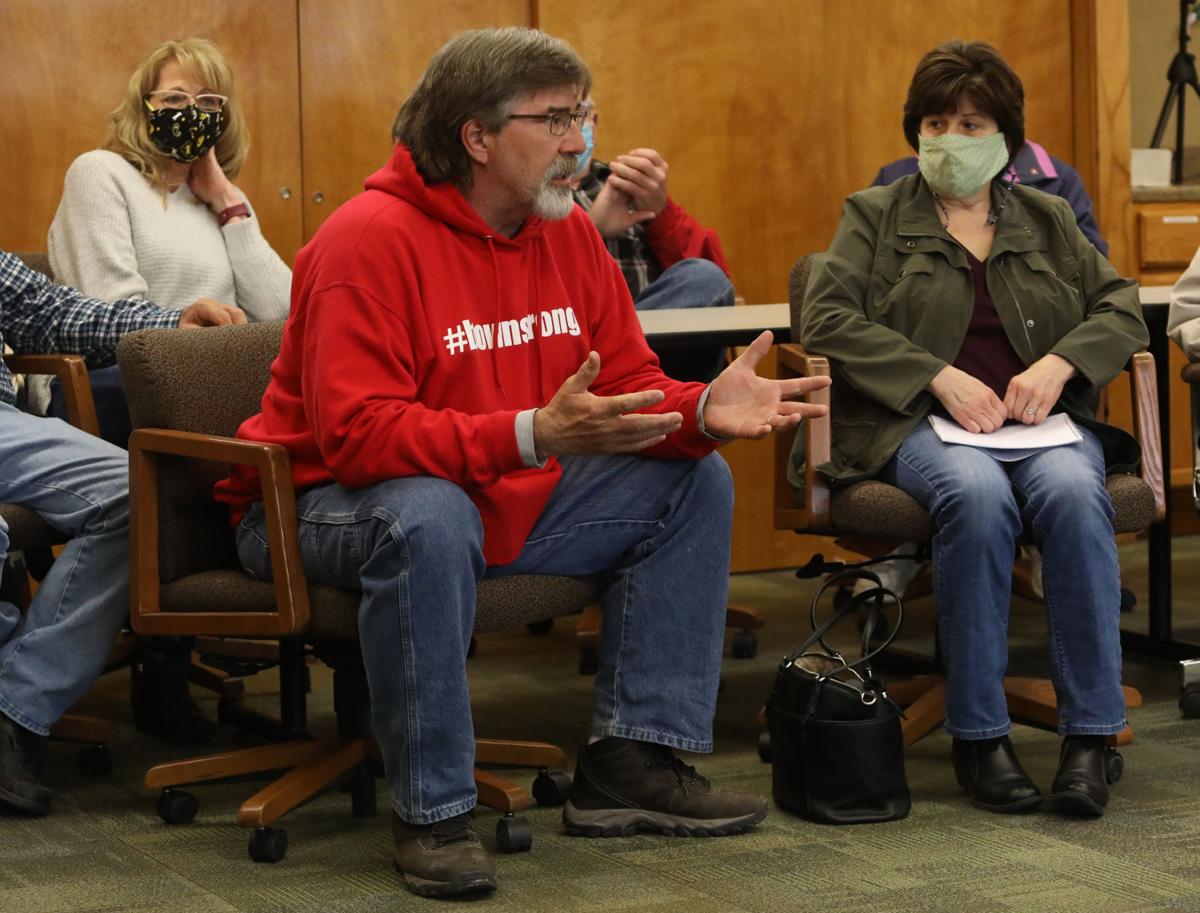 Paul Stults of Blairstown voices his concerns about the damage inflicted to roads at Hannen Park due to heavy traffic bringing in wood chips from Linn County on and off over the last several weeks. 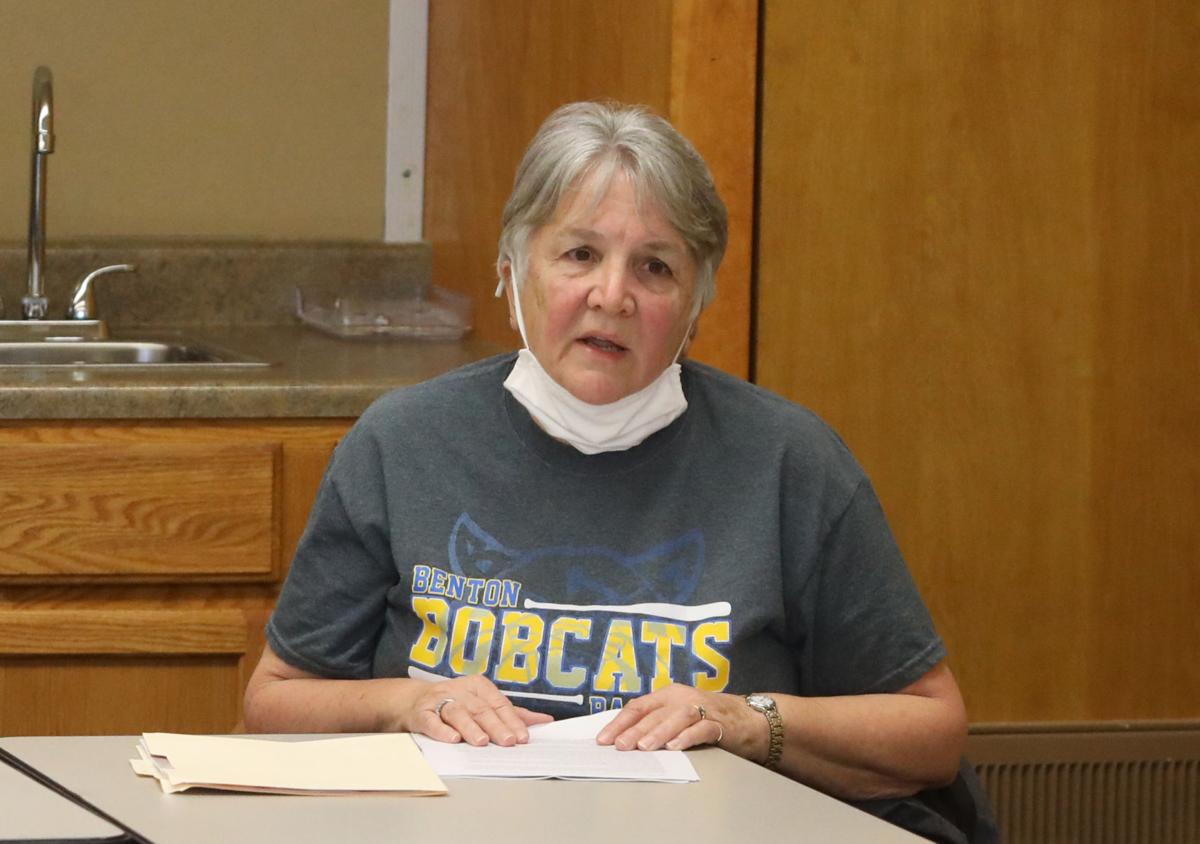 Deb Drahos of Blairstown speaks to the Benton County Board of Supervisors on behalf of Hannen-Fry property owners during Tuesday’s meeting.

Paul Stults of Blairstown voices his concerns about the damage inflicted to roads at Hannen Park due to heavy traffic bringing in wood chips from Linn County on and off over the last several weeks.

Deb Drahos of Blairstown speaks to the Benton County Board of Supervisors on behalf of Hannen-Fry property owners during Tuesday’s meeting.

Residents living near Hannen Park came before the Benton County Board of Supervisors on Tuesday to issue concerns over trucks carrying wood chips from derecho damage to the park and their impact on the roads in the area.

“My husband and I became aware of this project on March 1. we were inside eating lunch and saw four semis south on 19th Avenue,” Deb Drahos of Blairstown said. “We went outside later and could hear a bulldozer running. At about 5:00 p.m., we decided to investigate. We went down to the site to ask what was going on.”

Benton County Conservation had begun storing the wood chip debris on seven acres on the Fry property that was hauled in from Linn County, paying per cubic feet to come out to a rough estimate of $120,000 once completed. Semi trucks carrying these loads come off Highway 30 into Blairstown and follow a paved road in the Hannen Lake area. Five trucks carrying five loads have made the trip and already done 147 loads prior to Tuesday’s meeting, where 12 residents expressed concerns they were not told about this project beforehand.

“There are farmers and business owners with heavy equipment and semis that use these roads, but not to this extent,” Drahos said. “The Hannen Lake Road has experienced significant deterioration even before these semis started coming through. We are worried about the condition of the road once this project is completed and how it will be repaired.”

Paul Stults of Blairstown echoed these concerns and also noted trash and debris could potentially pollute Lake Hannen. He noted finding a discarded filter near the lake left after a semi dumped its cargo. Stults and Drahos referenced a figure that replacing a paved road could cost $200,000 to the county and easily wipe out the money promised to Benton County Conservation.

“Y’all should have thought about this more, the way I see it,” Stults said. “$100,000 you’ll make off of this is not going to compare to the road damage being done. And it will be everyone in the county paying for that, not just us.”

Shelby Williams, Director of Benton County Conservation, stated their department had tried to reach landowners and were unable to reach one, adding that the lack of landlines made it difficult to reach property owners “in short notice.”

“A few people suggested we should have gone to a Blairstown council meeting,” Williams said. “it’s hard to figure out what the best outlet would be for reaching everybody that wanted to be reached. It was never intentional to leave anyone out.”

The company hauling the loads has been instructed to minimize the number of trips a day with the road conditions in mind. Concerns of fire safety were also addressed during the meeting to the satisfaction of Stults.

“They talked about how that wood chip pile will shrink and decompose within the first year,” Stults said. “A fire starting from this pile was a big concern of mine.”

Myron Parizek, County Engineer, stated the county would look into repair of the roads and are in consistent contact with the company hauling the wood chips into the area. The project will continue and is expected to take another 20 working days to complete. The County Supervisors reaffirmed their support of the project.

“The Conservation Board is a separate board under their own control,” Supervisor Rick Primmer said. “We only have control of their budget. We have issues on 57th Street trail and 33rd Avenue, which is over by Urbana with heavy traffic. These are public roads they are going down.”

The project will continue albeit changes in how much stress is put on the roads during a single day. Parizek reaffirmed his office will monitor the roads and stay in contact with the contracted company.