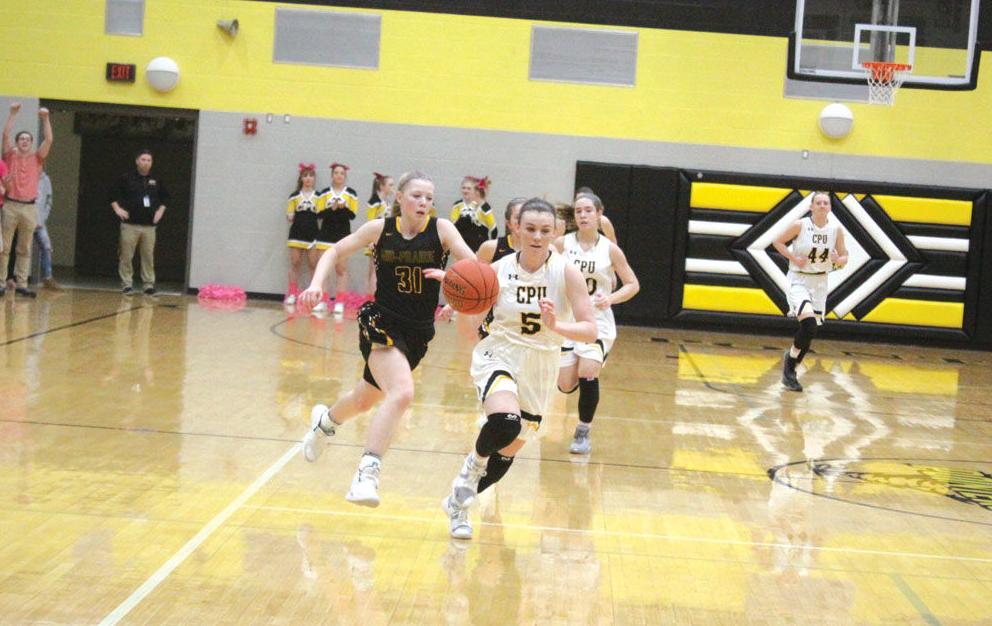 #5 Karly Millikin dribbles in transition Wednesday night. The senior and other Stormin’ Pointers used pressure on both ends to propel CPU to the decisive 54-30 win. 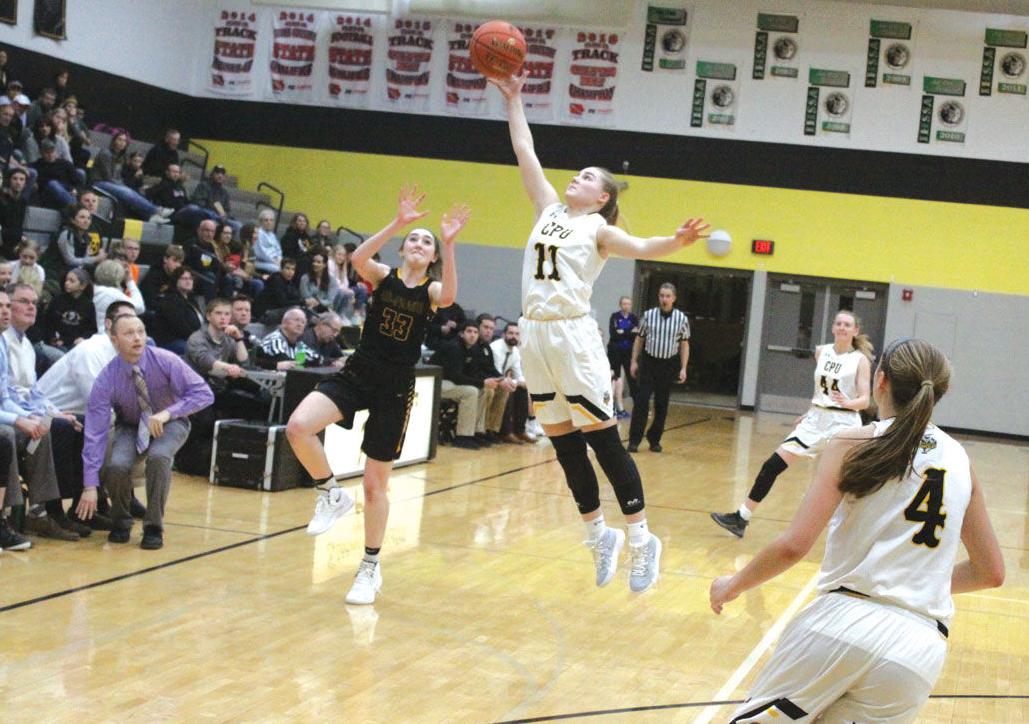 #11 Rylee Clark elevates off the ground to get her hand on the intended Mid-Prairie pass as Head Coach Philip Klett and others look on.

#5 Karly Millikin dribbles in transition Wednesday night. The senior and other Stormin’ Pointers used pressure on both ends to propel CPU to the decisive 54-30 win.

#11 Rylee Clark elevates off the ground to get her hand on the intended Mid-Prairie pass as Head Coach Philip Klett and others look on.

Nonetheless, these victories were enough to set up a battle between the visiting Golden Hawks and the hosting Stormin’ Pointers Wednesday night in the Regional Semi-Final.

Picking up the action a minute into the first quarter, senior Madie Willson got CPU on the scoreboard first with a steal and a lay up in transition. Seniors Callyn Fox and Rylee Clark were able to follow in line to get the lead up to 6-0 around the midway point. However, a Shae Becker lay up and a Caitlyn Riggan three pointer helped trim the Mid-Prairie deficit down to one. Unfortunately for the visitors though, the Stormin’ Pointers began the first with a 6-0 run and ended up finishing it the same way with successful jump shots by junior Adrianna Katcher and senior Karly Millikin, along with a free throw each for freshman Ryley Goebel and Willson.

Ahead 12-5 to start the next eight minutes, CPU continued upon their string of consecutive points as two Fox free throws, a Peyton Kriegel three pointer, and a Katcher lay up propelled the Stormin’ Pointers to a 19-5 advantage. Coming out of a timeout at the 5:34 mark, the Golden Hawks snapped the 13-0 run with back to back buckets by Madeline Nonnenmann. However, that would be the last points of the first half for Mid-Prairie. As for CPU, they would get eight more, led by Fox with four, to take the 27-9 lead into the locker room.

Coming back on to the court for third quarter action, Katcher (free throw) and Fox (lay up) brought the margin to 21 before two Golden Hawk free throw attempts were successful. Following this, Fox found great rhythm with her jump shot as she knocked down two in a row. Mid-Prairie tried their best to match and even finished the quarter on a 5-0 run. However, 11 combined points for senior Chloe Neighbor (4), junior Bryn Hadsall (3), Goebel (2), and Kriegel (2) had the Stormin’ Pointers out in front by 25 at 45-20.

Facing an uphill climb, the Golden Hawks ended up scoring the first three points of the fourth quarter, but Kriegel and Fox followed with a three and a lay up respectively. From here, action would go back and forth, resulting in a 10-9 margin for Mid-Prairie in the final eight minutes. However, it was not near enough as CPU cruised to the 54-30 victory.

“The pressure was a big factor tonight. If we can do those things, it just makes it more difficult for them to get buckets and then hopefully our defense can generate some offense for us,” said CPU Head Coach Philip Klett.

Leading the way to a decisive win was Fox with a game high 18 points. Kriegel (8) and Katcher (7) combined for 15 more, while Nonnenmann paced the Golden Hawks with 11.

With victories in the first two rounds, the Stormin’ Pointers (20-2) will now face Central Lee, who beat No. 14 West Burlington, 44-40, Saturday night at 5 p.m. in the Class 3A Region (5) Final. The game will be played at Iowa City West and the winner advances on to the State Tournament in Des Moines.

“I’m not quite sure what all Central Lee does yet, but what I know is that they have a handful of shooters and potentially want to get up and down. We’ll watch film and try to get a better idea for practices,” commented Coach Klett. “The biggest thing is we have to clean up what we do, offensively and defensively. If we do those things, we’ll put ourselves in a position to win the game.”

Partly cloudy skies in the morning will give way to cloudy skies during the afternoon. High 57F. Winds NW at 10 to 20 mph.