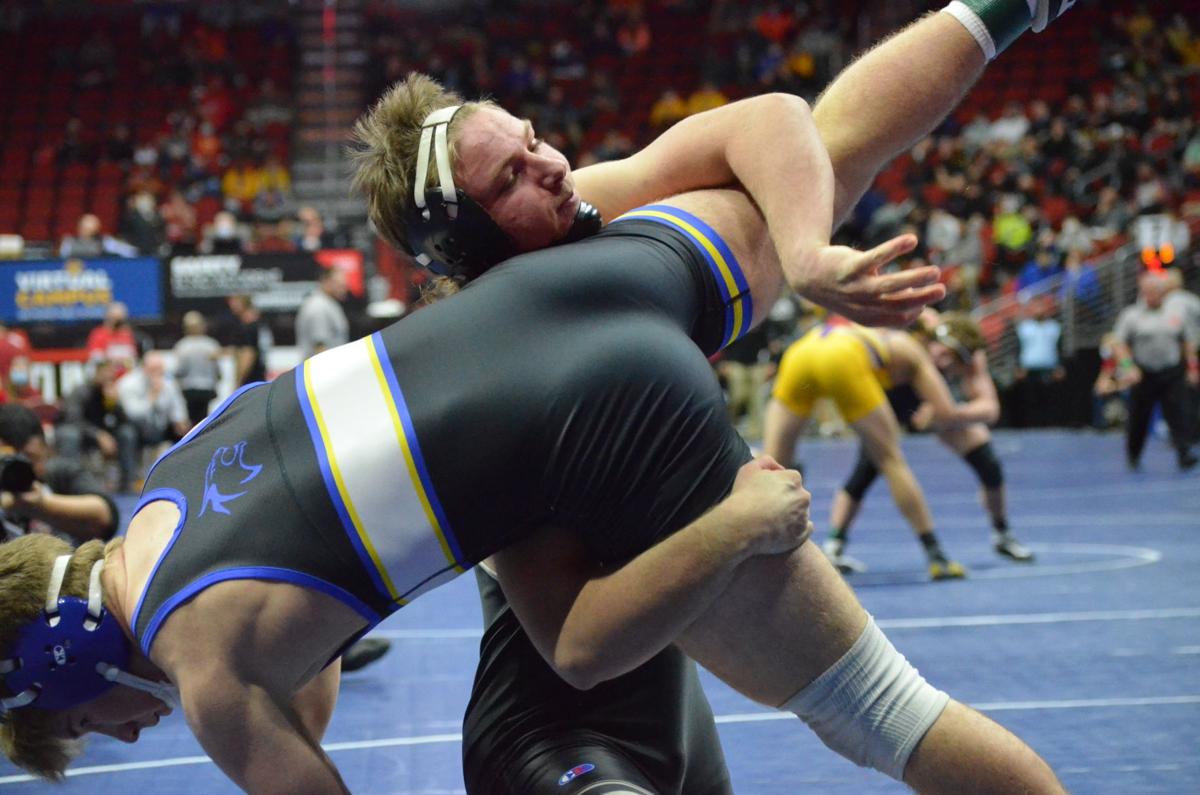 Union's Adam Ahrendensen bested Benton Community's Austin Roos for the third time in the postseason during their Class 2A 182-pound quarterfinal Friday afternoon at Wells Fargo Arena in Des Moines. 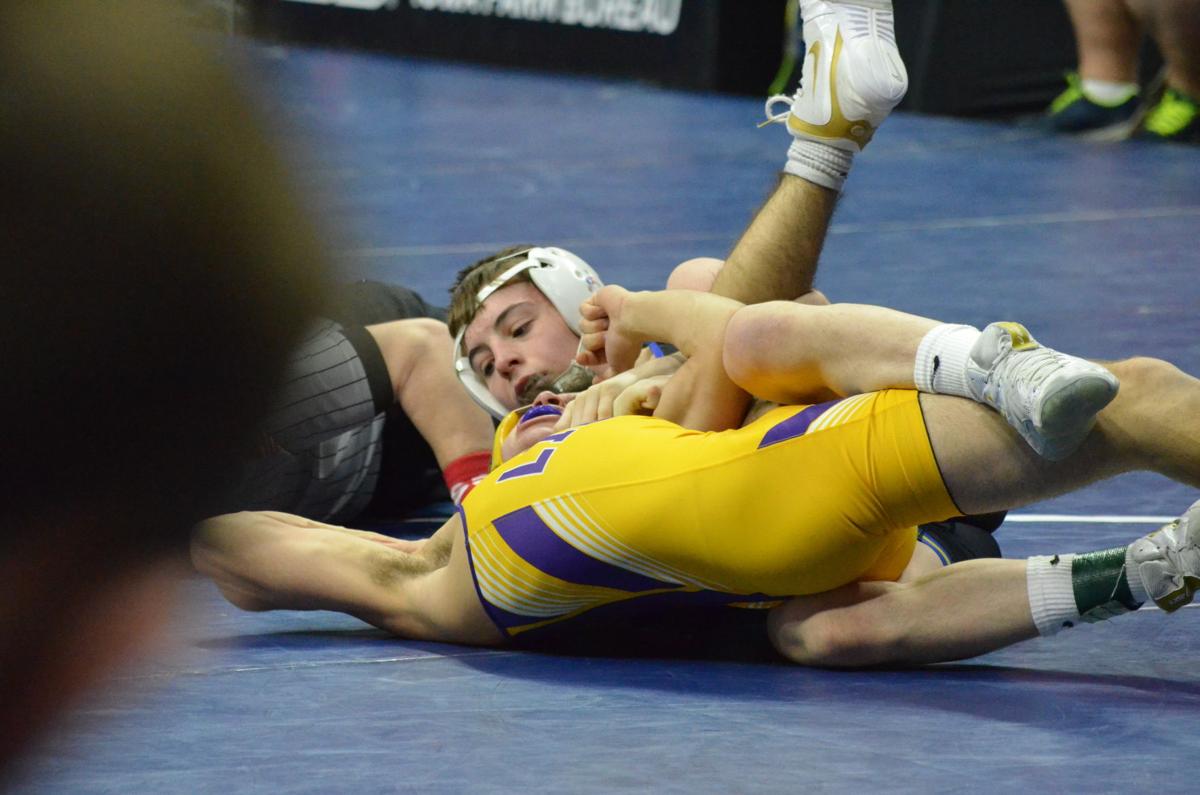 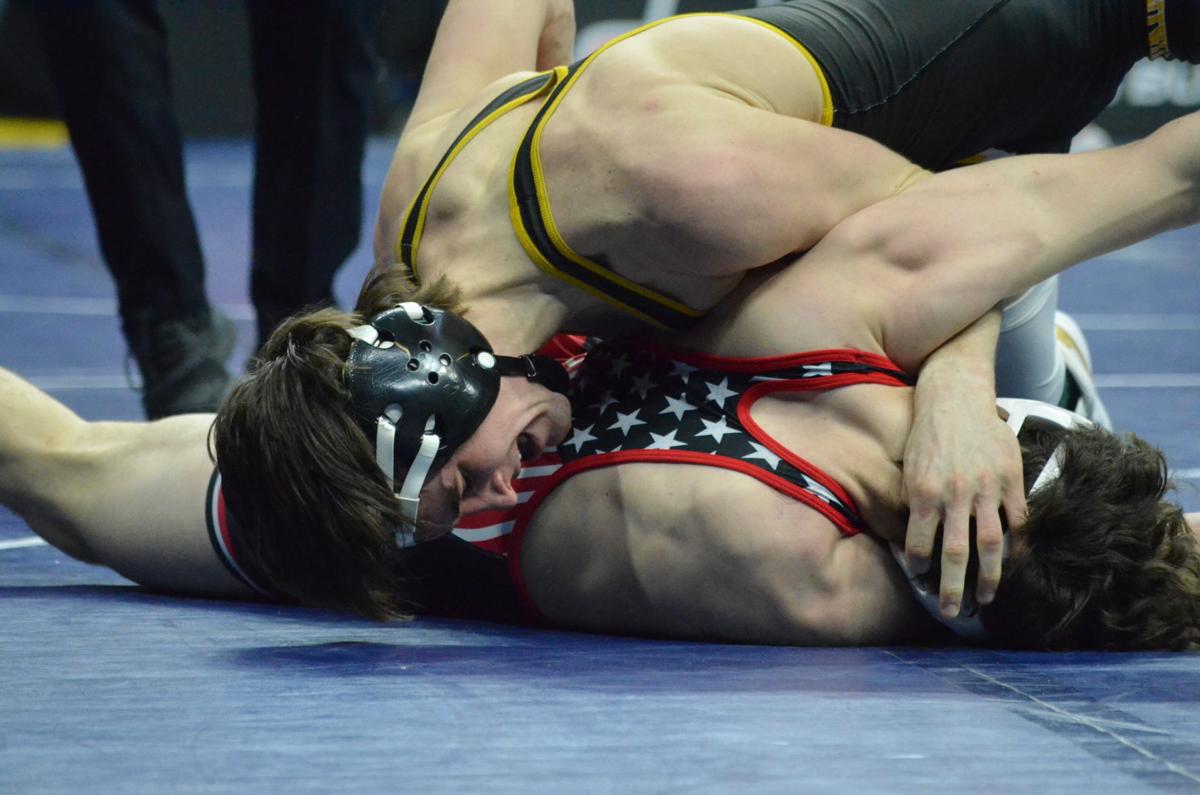 Union's Adam Ahrendensen bested Benton Community's Austin Roos for the third time in the postseason during their Class 2A 182-pound quarterfinal Friday afternoon at Wells Fargo Arena in Des Moines.

In addition, Benton Community’s Austin Roos (182) and Union’s Hunter Worthen (160) are still alive for medals after surviving the blood round. They will wrestle later to determine what placement match they face.

Ahrendsen faced Benton County foe Austin Roos for the third time in the postseason, and picked up a 10-2 major decision. Ahrendsen (21-0) pinned Roos in both the sectional and district championship matches, but Roos “was a lot more conservative,” according to Ahrendsen, and battled for six full minutes.

“I tried to open him up (but) it didn’t really work,” Ahrendsen said after scoring two in the first, five in the second and three in the third. “Just tried to keep with my gameplan and rode him tough to wear him down.”

Ortner believed he pinned Davenport Assumption’s Michael Macias in the second period, but there was no call. He led 5-2 after the frame, and held on as Macias scored four points around a penalty point for Ortner.

With the match at 6-all, Ortner earned a reversal for an 8-6 lead. After a blood time stoppage, Ortner chose the down position and earned an escape for the final score.

“I guess it was pretty crazy,” ORtner said of the third-period scoring binge. “Thought I beat him in the second when I put him on his back, but just kept wrestling from there. Worked through my positions and I wasn’t going to let him take me down.”

Moore (32-7) reached the semifinals for a second straight year with a pin of Central Lyon-G-LR’s Devon Morales in under a minute.

“It was nice to get a quick pin and get off the mat,” Moore said.

On the back end of the bracket, Roos earned a 6-5 decision against Spirit Lake Park’s Keegan Bradley to secure his podium spot. Roos led 4-3 in the second before Bradley got an escape to tie the match. In the third, Roos claimed another takedown and rode Bradley out for nearly a minute. Bradley picked up another escape with 17 seconds left, but Roos (34-8) held off a couple late shots attempts.

Worthen (35-5) shook off a 5-2 semifinal loss at 160 pounds to earn a pin and reach the placement matches. He led West Liberty’s Drake Collins 7-1, with the last points coming off a takedown that turned into a pin.

Union’s Lincoln Mehlert (33-7) and Stone Schmitz (30-7) both lost their second matches of the tournament before reaching the podium.