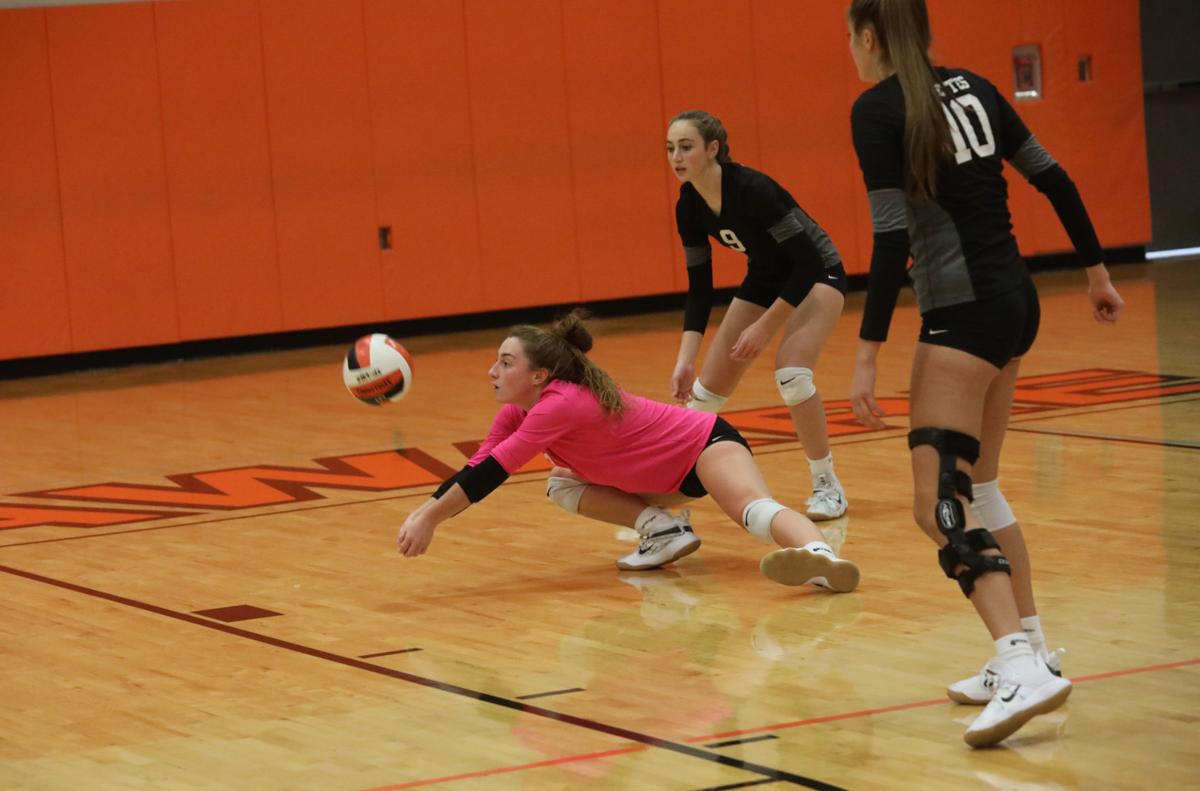 V-S junior libero digs up a ball as the Vikettes face West Delaware on Tuesday. V-S would finish 0-2 against Clear Creek-Amana and West Delaware. 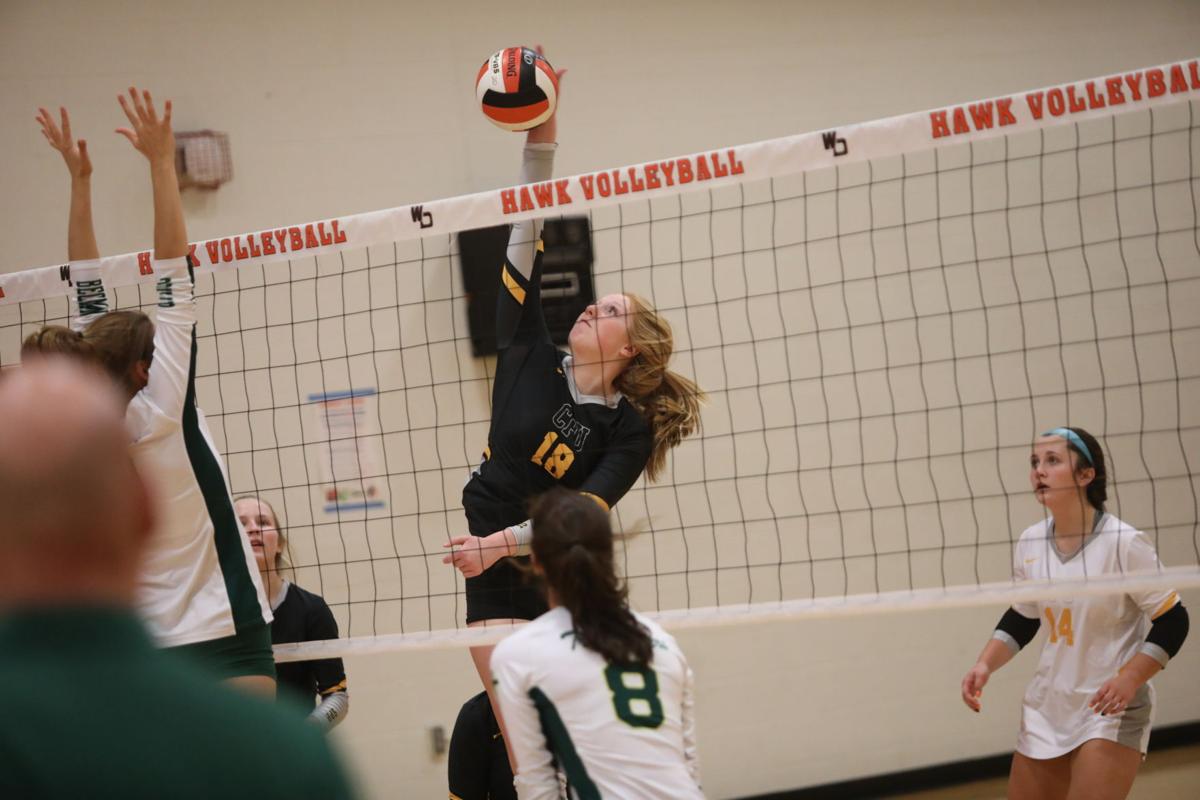 CPU senior Terra Fink rises up for a kill against Beckman Catholic during WaMaC Pool Play on Monday.

V-S junior libero digs up a ball as the Vikettes face West Delaware on Tuesday. V-S would finish 0-2 against Clear Creek-Amana and West Delaware.

CPU senior Terra Fink rises up for a kill against Beckman Catholic during WaMaC Pool Play on Monday.

Benton, Center Point-Urbana and Vinton-Shellsburg volleyball competed in pool play on Tuesday to determine brackets for Thursday’s WaMaC Conference Tournament, with all three teams finishing 0-2 and will play in the five-team consolation bracket.

CPU and V-S were both assigned to play at West Delaware for pool play, assigned to two different courts for three-team pools. The Vikettes were first up against a familiar opponent in 4A 11th ranked Clear Creek-Amana as the Clippers swept them in Vinton only four days prior. The start was far different for V-S as they played with CCA through the full set before pulling away late for a 21-16 win. The Clippers would come back 21-10 in the second set to force a third, decisive set. With momentum back in their court, CCA put out the Vikettes’ fire 15-9 in the final set to win 2-1 overall.

“I told the players if all our hitters were on, we would win the match,” coach Michelle Ruess said. “At home last week, we had only one or two of our hitters on that whole match. If we could cut down the errors, this match was winnable. We saw that in the first set, but in the second set we could not pass the ball and we were back to square one. There were chances in the third set and we played with heart.”

CPU took on Maquoketa in the next round of pool play in West Delaware. The Stormin’ Pointers were looking to turn the corner after their 1-2 record during their home invitational on Saturday, but also were careful to bring out starting setter Ella Casey nursing an injury. CPU continued to utilize senior Katie Droste and junior Keely Franck for setting in the first set to see if the lineup would “be comfortable together” after three games over the weekend, according to coach Michelle Halac. Maquoketa took the first set 21-9, which led to Casey being put back in the rotation for the second set.

“There was nothing against Keely or Katie, but we weren’t gelling with that lineup,” Halac said. “We wanted to try something else to see if we could put a quality set out there in the second set.”

While the Cardinals would take the second set 21-14 and match over the Stormin’ Pointers, the offense improved with an experienced setter in Casey on the floor. The senior would remain in the lineup as CPU moved on to 2A ninth-ranked Beckman Catholic. While the Blazers would take the match 2-0, it would not be without a fight as the Stormin’ Pointers battled in the second set for a close 21-19 loss.

“We played better in that second set than we have all day,” Halac said. “As far as serve receiving, we had some decent passing and our blocks got more touches. Our hitters were finding some great spots, but a few too many errors didn’t help our runs to overcome Beckman.”

V-S ended their day taking on 4A eighth-ranked West Delaware for the third time this season. The Hawks won the first set 21-12 before the Vikettes came back with a competitive second set. Ultimately, errors took the steam out of V-S in a 21-15 loss to end their day.

“We played with heart in that second set and did not let the ball drop,” Ruess said. “We had our moments to take the lead. We couldn’t get the ball over the net to keep up with West Delaware.”

Benton played in a separate pool at Independence the same day, falling to 3A 10th-ranked Independence 21-12 and 21-16, then ending their day in a loss to 4A seventh-ranked Marion 21-11. 21-15. Junior Grace Embretson finished with nine kills and six digs, with senior Caitlin Keiper and sophomore Olivia Janss also contributing six digs on the day and junior Kiah Coffin with 10 assists.

All three teams will be placed in the WaMaC consolation bracket at Williamsburg High School. With the conclusion of the tournament, focus will shift to the postseason for schools such as CPU. The Stormin’ Pointers will travel to face Independence in the first round of Regionals on Monday, setting up for a rematch that saw CPU finish 3-2 against the WaMaC West champs.

“We felt really good about what we did the first time in Independence,” Halac said. “The girls are still kicking themselves for not finishing the match, but it also gave us a lot of confidence in what we can do. We need some of that confidence right now. It’s a tough first draw, but we know we can take some sets away from Indee. Our adversity makes us optimistic we can make some noise in Regionals this year.”

Check out photos of the Stormin’ Pointers and Vikettes in action at: vintonnewspapers.smugmug.com/WaMaC-Volleyball-Pool-Play-10122020/i-QstT7pd

Scattered thunderstorms this morning, then mainly cloudy during the afternoon with thunderstorms likely. A few storms may be severe. High 67F. Winds SE at 10 to 15 mph. Chance of rain 90%.

Showers and thundershowers this evening will give way to steady rain overnight. Low 36F. Winds NW at 10 to 20 mph. Chance of rain 100%.