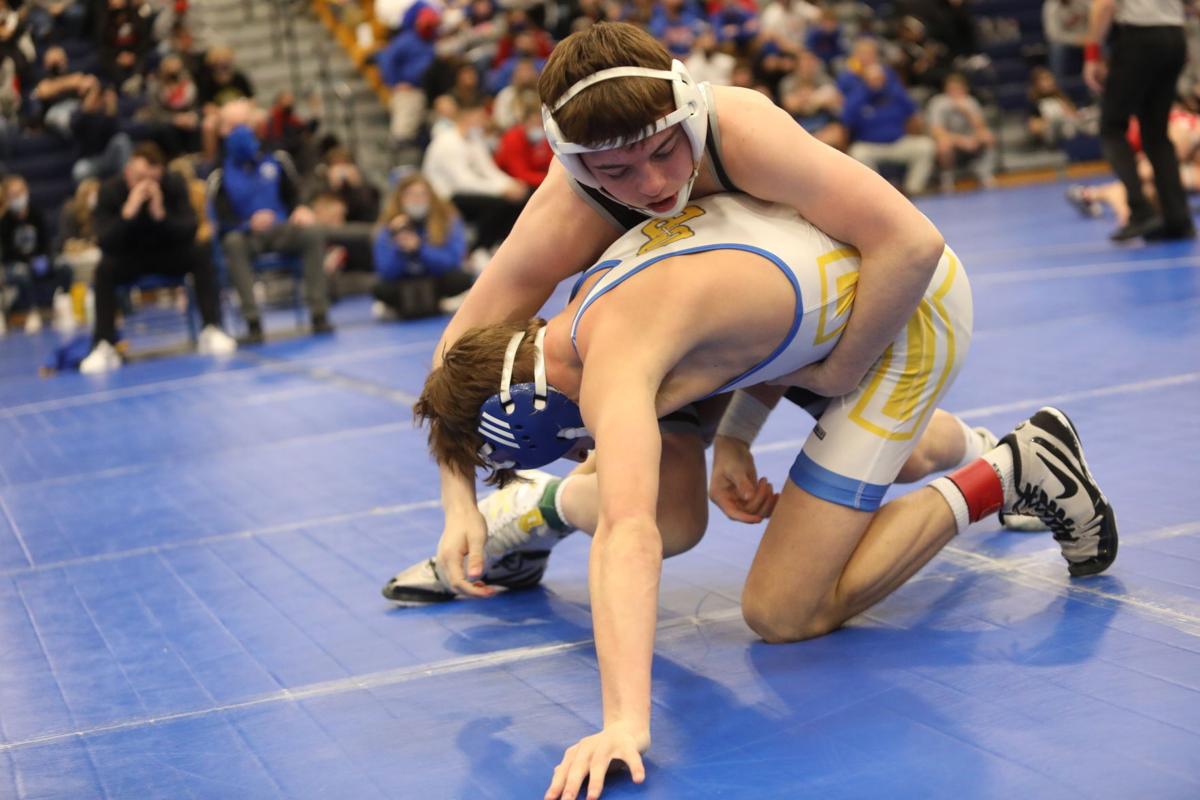 Benton junior Jaiden Moore reached the 120 lbs finals of the Jerry Eckenrod Invitational on Saturday, coming up just short in a 6-5 loss. 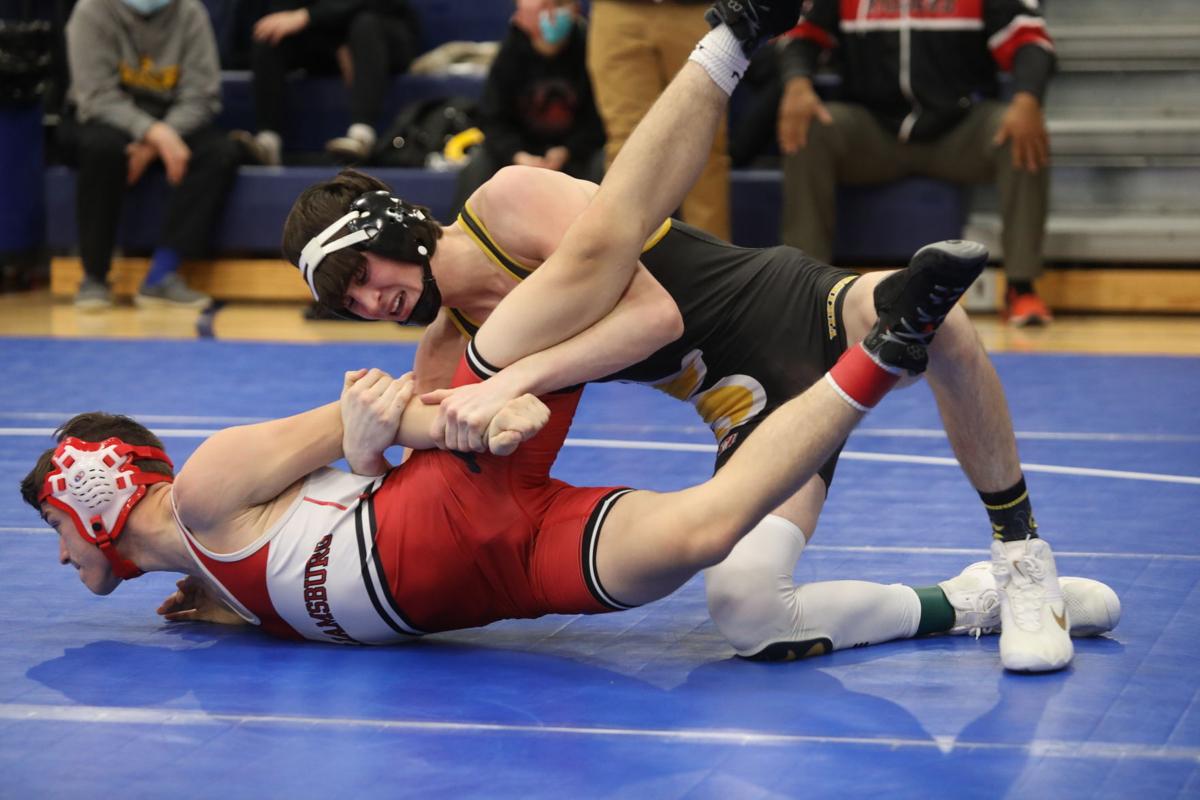 VS junior Brady Ortner locks up his Williamsburg opponent during the 47th Annual Bobcat Jerry Eckenrod Invitational on Saturday. 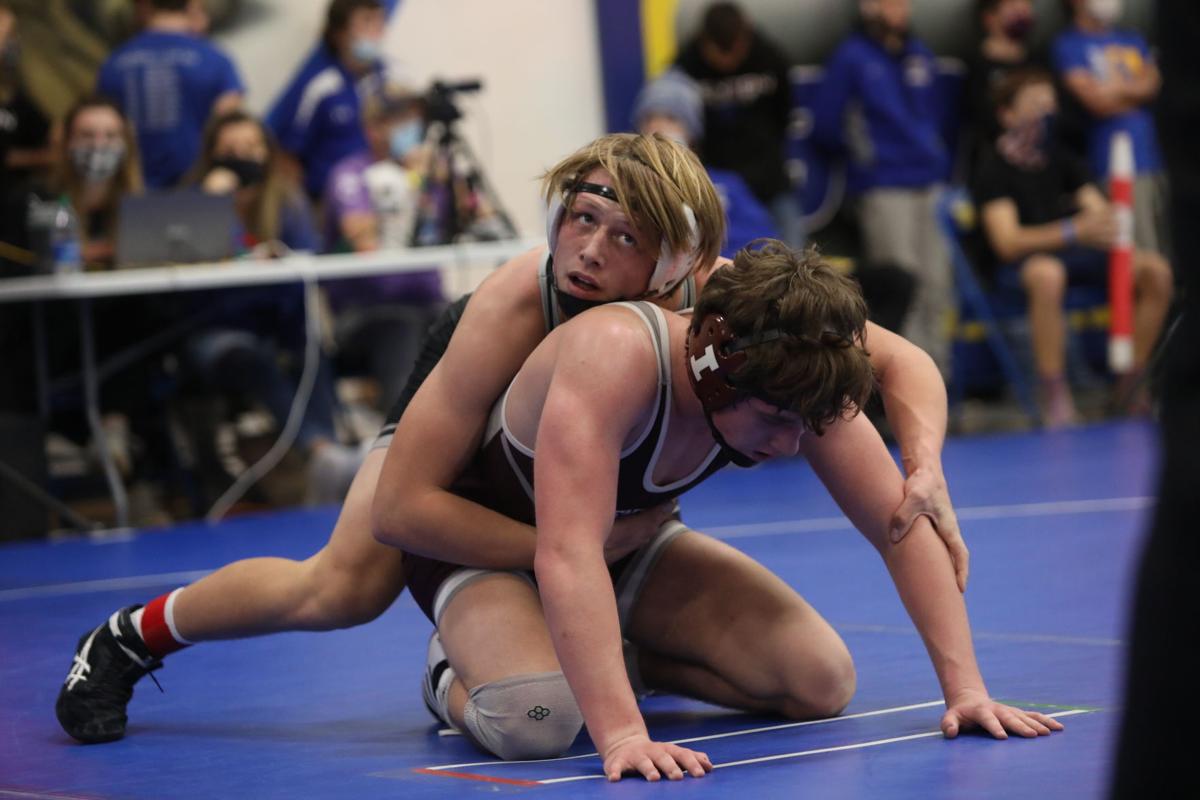 Union senior Lincoln Mehlert took home third place at 145 lbs at the Jerry Eckenrod Invitational at Benton on Saturday. Mehlert was one of seven Knights to reach the podium during the tournament.

Benton junior Jaiden Moore reached the 120 lbs finals of the Jerry Eckenrod Invitational on Saturday, coming up just short in a 6-5 loss.

VS junior Brady Ortner locks up his Williamsburg opponent during the 47th Annual Bobcat Jerry Eckenrod Invitational on Saturday.

Union senior Lincoln Mehlert took home third place at 145 lbs at the Jerry Eckenrod Invitational at Benton on Saturday. Mehlert was one of seven Knights to reach the podium during the tournament.

Saturday saw 17 teams and 78 ranked wrestlers fill out Benton Community Jr/Sr High for the 2021 Bobcat Jerry Eckenrod Invitational, where Benton, Union and Vinton-Shellsburg compete among some of the best wrestlers in Iowa.

“We’re very proud to host and compete in a tournament like this every year,” Benton coach Jake Voss said. “Up and down the weight classes, there is plenty of tough competition.”

After being cancelled last season due to weather, returning teams were itching to compete in one of the largest tournaments held this season amid concerns over COVID-19. Those concerns, however, did not stop athletes and coaches from competing against the eight ranked teams from each of the three classes.

“It’s one of the hardest tournaments in the state,” Union coach Bart Mehlert said. “Our older guys knew what this experience is like, but for young wrestlers this is an eye opener. All three classes are represented. Tournaments like this help to build for February.”

“Everyone wrestled to about their seed, so we have to get over that gap,” Mehlert said. “Everybody’s beatable. We have to look past the number by their name and wrestle.”

Vinton-Shellsburg finished 16th with two wrestlers making the podium at the end of the evening. Freshman Carter Lamont finished fourth at 113 lbs and junior Brady Ortner fourth at 138 lbs. Knowing this tournament would be the toughest challenge wrestlers would face until postseason, coach Brian Sheston wanted to see the Vikings compete to the best of their ability.

“We definitely saw some positives today, but also some areas we need to work,” Sheston said. “Carter wrestled some kids he faced just this Thursday and wrestled them better. After what Brady did last year with placing at State, people expect big things from you. Finishing top four in a tournament like this says something about Brady’s strides as a wrestler, especially when you have to face a defending state champion in the third place match.”

The host Bobcats finished 13th overall as a team with three wrestlers making the podium. Benton would feature the lone area wrestler to make the finals with junior Jaiden Moore qualifying at 120 lbs. In a close battle against Garrett Funk of Don Bosco, Moore was edged out 6-5.

“Jaiden had a great day today and has seen a lot of great opponents here recently,” Voss said. “It was good to see him come out today and reach the finals. The more he sees competition like this, the better it is for him down the road. Today was definitely a successful day for Jaiden.”

Benton also saw senior Austin Roos place fourth at 182 lbs and freshman Brennen Blegan fifth at 285 to cap off a successful day for the host program.

“Our common theme this year has been to get better than we were last season, which we saw out of each of our wrestlers in this tournament,” Voss said. “Everyone is continuing to progress, and we still have four more weeks to get the most of those this season. I want to thank Shawn Pfiffner for putting on such a great event and for all the parents, workers, volunteers that made today so great.”

Benton will compete in a quad with Mid-Prairie, North Linn and host Wilton on Tuesday, followed by a dual with Marion and Williamsburg at the former on Thursday.