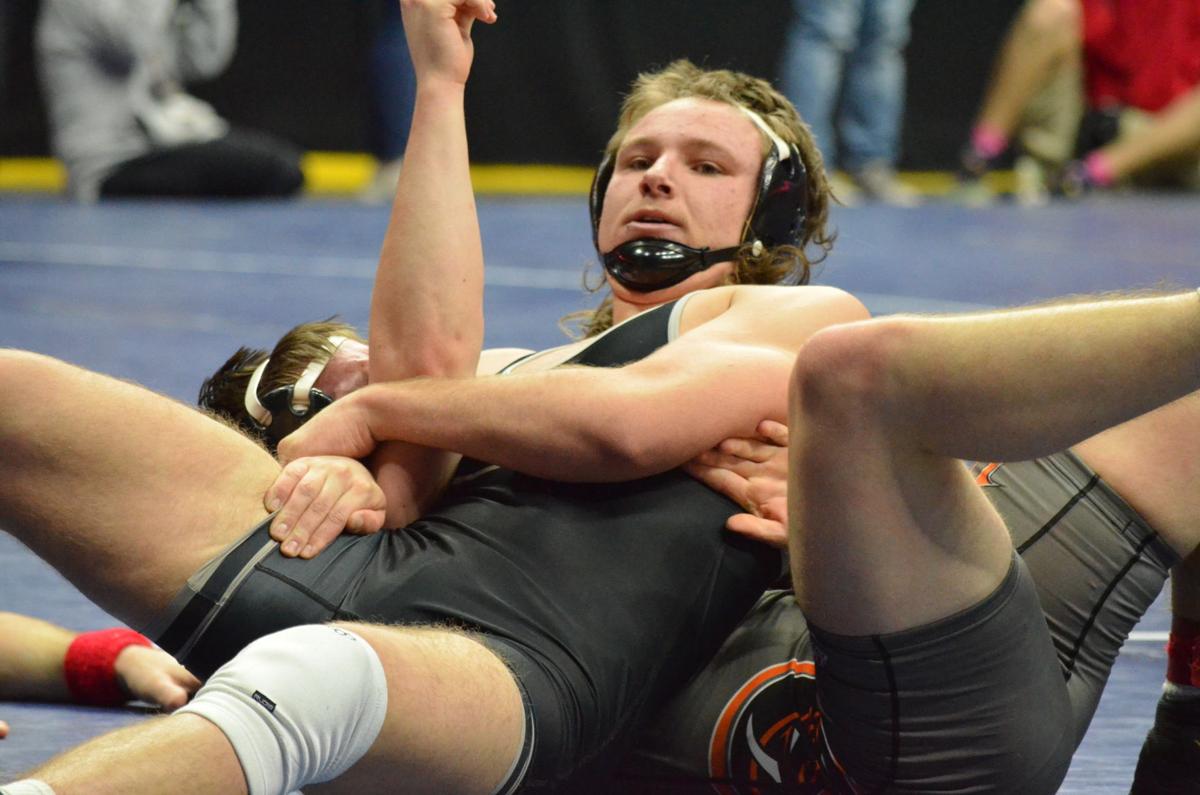 Union's Adam Ahrendsen earns a pin during a 182-pound Class 2A first-round match at Wells Fargo Arena on Thursday in Des Moines. 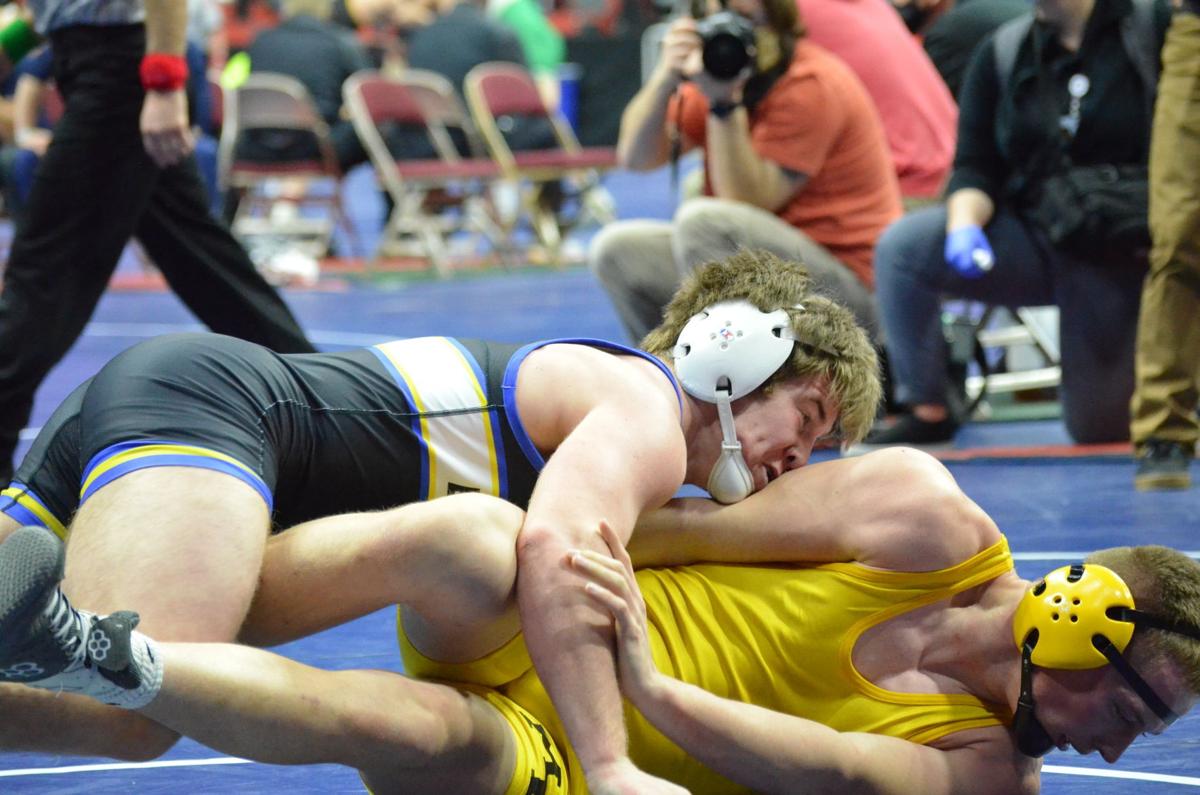 Benton Community's Austin Roos takes down his opponent during a 182-pound Class 2A first-round match at Wells Fargo Arena on Thursday in Des Moines. 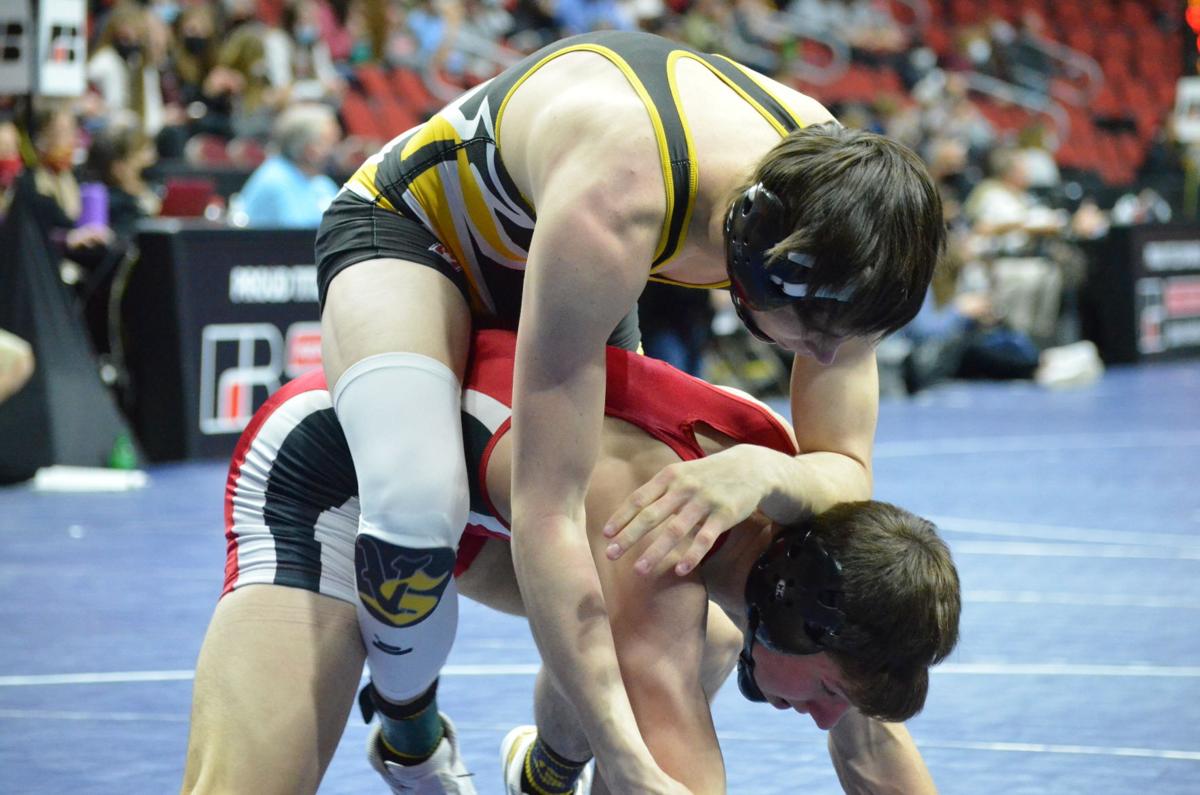 Vinton-Shellsburg's Brady Ortner wrestles during a 138-pound Class 2A first-round match at Wells Fargo Arena on Thursday in Des Moines. 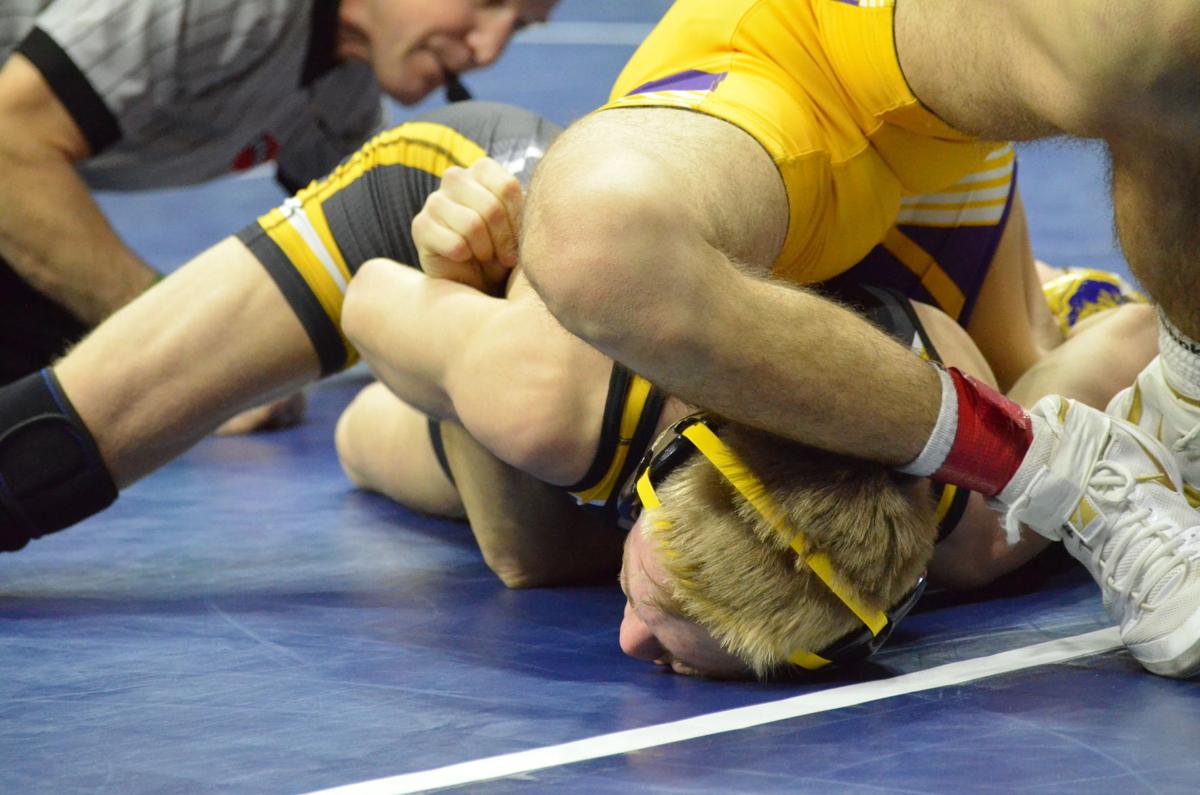 Union's Adam Ahrendsen earns a pin during a 182-pound Class 2A first-round match at Wells Fargo Arena on Thursday in Des Moines.

Benton Community's Austin Roos takes down his opponent during a 182-pound Class 2A first-round match at Wells Fargo Arena on Thursday in Des Moines.

Vinton-Shellsburg's Brady Ortner wrestles during a 138-pound Class 2A first-round match at Wells Fargo Arena on Thursday in Des Moines.

DES MOINES — All but one remain.

Adam Ahrendsen began his quest for a second state championship with a pin in 1 minute, 15 seconds of his 182-pound match against Washington’s Ayden Frazier. Ahrendsen (20-0) got a two-point takedown nine seconds into the match, worked Frazier around the mat for a minute, then maneuvered him into the pin.

“It’s just another stepping stone,” Ahrendesen said. “I just have to take one match at a time.

“I just keep on my own style and keep wrestling.”

Ahrendsen’s pin came on the same mat that teammate Hunter Worthen notched his first-round win at 160 pounds. Worthen bested Central Decatur’s 11-3, scoring four points in the first and second periods and three in the third.

“I was able to get to my snaps nice and early,” Worthen said. “I felt I did a good job of picking up my feet, moving on my snaps. I was just constantly chopping down that tree.”

“It was a tough match, but you have to find a way to win,” Moore said. “It wasn’t my best match, but the first one is out of the way. Keep it going from here.”

He earned a late first-period takedown, then spent the second and third periods being ridden out and riding Koch out, respectively.

“I wish could have scored a lot more, but he was tough on top,” Moore said. “Then I had to stay solid in the third and pick up the rideout.”

Roos (33-7) logged a 12- major decision against Mid-Prairie’s Ben Meader. After a scoreless first period, the Bobcats 182-pounder picked up seven in the second on two takedowns and a near-fall and five in the third on a takedown and a near-fall.

“Just have to keep working hard, control what I can control,” Roos said. “I was going for the pin. Thought I had it, but three back points will do.”

Vinton-Shellsburg senior Brady Ortner remains on track for a medal after his pin against Greene County’s Brady Stauffer. Stauffer led 2-0 late in the first before Ortner picked up a reversal for a 2-all match.

“I knew I was going to have to get out before the period ended,” he said. “I tried to get a switch, but I had a caution off the whistle. On the restart he went for a far-knee, far-ankle and I switched out of that for the reversal.”

“He let me up (to start the third) and then I got in a deep single leg and finished it,” Ortner said. “Ended up getting the fall.”

The area's lone loss was an excruciating loss.

Holding a 5-0 lead late in the third period of his Class 2A 120-pound first-round match, Center Point-Urbana’s Cole Whitehead crumpled to the ground and yelled out in pain after attempting a move against Central Lyon-G-LR’s Donovan Morales. After a long injury delay, an emotional Whitehead (32-6) was carried off the mat by his coaches to applause from those around the mat and the crowd in the stands.

"At the end of the day, Gold Medals are nice, but the legacy that you leave will live forever," CPU head coach Matt Grennan tweeted. "Cannot ask for a more dedicated, hard working and just a great all around kid than @WhiteheadCole."