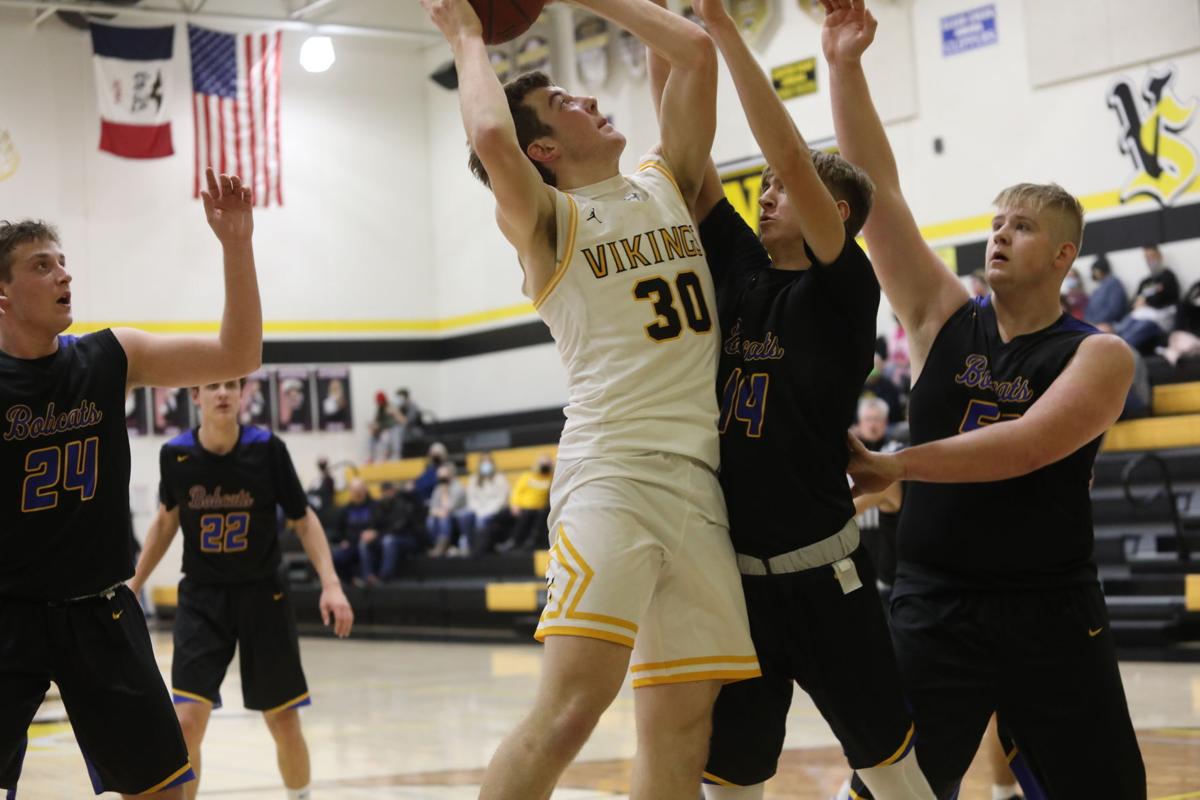 VS senior Ethan Rollinger was effective inside the post for the Vikings, finishing with 23 points and 11 rebounds in a 56-47 win over Benton. 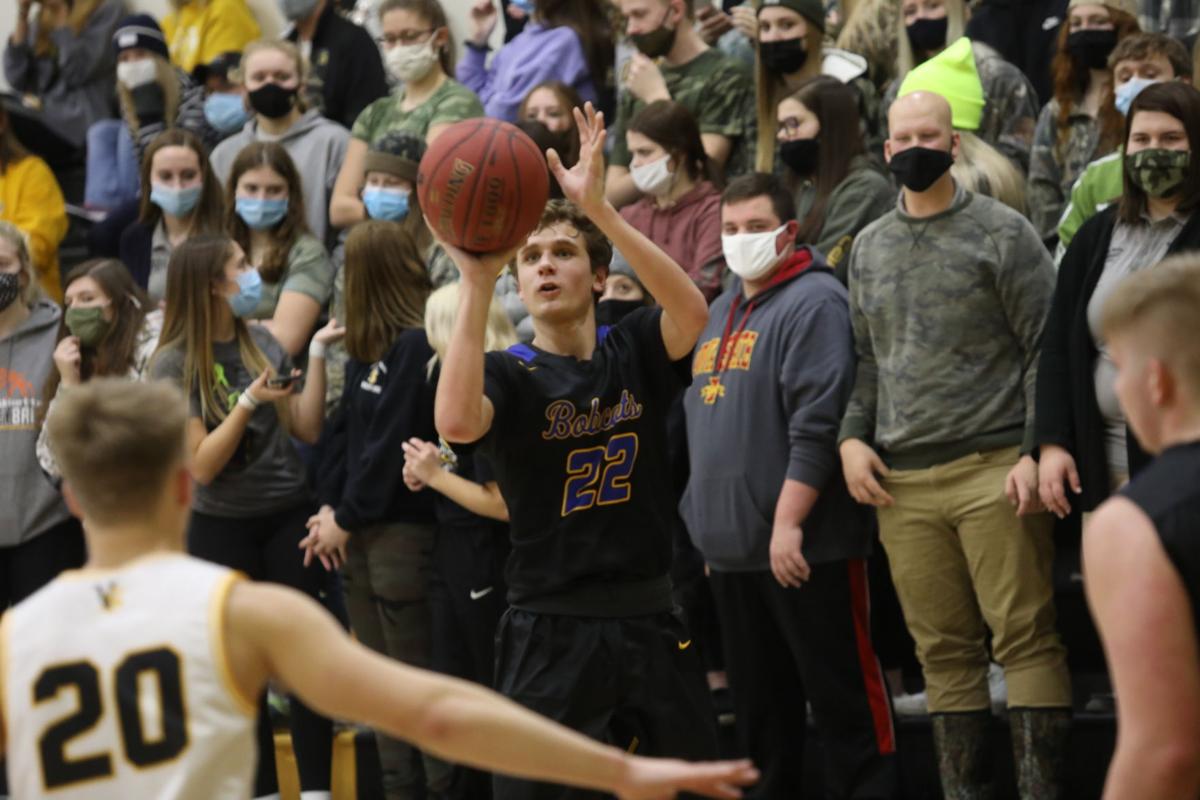 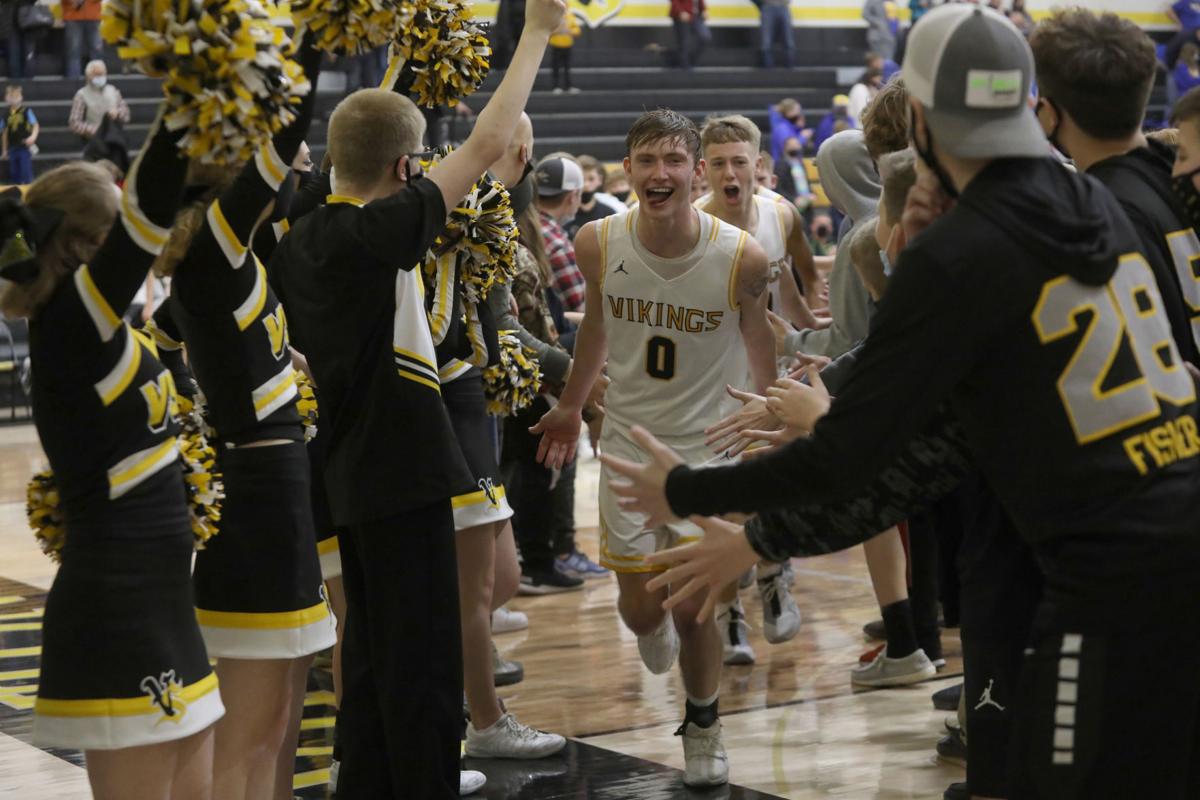 VS seniors CJ Rickels, Elijah Kalous and the Vikings soak in a win over Benton as cheerleaders and the student section high five them heading into the locker room.

VS senior Ethan Rollinger was effective inside the post for the Vikings, finishing with 23 points and 11 rebounds in a 56-47 win over Benton.

VS seniors CJ Rickels, Elijah Kalous and the Vikings soak in a win over Benton as cheerleaders and the student section high five them heading into the locker room.

The Benton County rivalry added an exciting chapter to its history as Vinton-Shellsburg defended home court from a third quarter Benton comeback to win 56-47 Monday night.

“It’s hard to put into words what this rivalry means for these two schools,” VS coach Joe Johnson said. “This rivalry isn’t about fistfights or name calling. There’s a lot of respect both ways both on and off the court. We are lucky to be able to have a home and away series each season and to enjoy it this year with everything going on.”

Benton came into Monday’s game looking for its first win of the season as the junior-led squad continues to improve with each time out on the hardwood.

“We talked about getting better tonight, get buckets and get stops,” Benton coach Larry Carlson said. “We did two of those things tonight. We got buckets when we needed them and we got better tonight.”

The Vikings looked inside almost immediately as senior Ethan Rollinger had a size advantage over a guard-heavy Benton team, scoring nine points in the first quarter alone for a 13-8 lead.

“We knew coming into this game [Benton] didn’t have a lot of height,” Rollinger said. “I knew I needed to work hard in the post. That’s where I knew I could help my team tonight.”

Rollinger’s touches also opened up shots from senior CJ Rickels, including a shot before the buzzer to put the Vikings up 26-17 at halftime. Any comfort VS felt in the third quarter was soon gone as the Bobcats found their offensive rhythm behind sophomore Blake Daugherty and junior Issac Cretin, tying the score up at 40 apiece thanks to the three ball.

“Shooting is contagious,” Carlson said. “Blake got us going and soon other guys like Isaac and Nate (Polansky) were starting to feel it. Watching them knock down those shots made this a fun game. When guys like Blake are hitting like that, it starts opening up our inside game and other shooters.”

Benton would outscore VS 17-12 in the third quarter, notably moving to a zone defense to limit Rollinger inside and to force the Vikings into tough shots. VS likewise switched tactics in the final quarter as they attacked in transition and hit key shots to extend their lead back out. When Rollinger was open down low, the Vikings continued to look for him. The senior also used his size to pull down five offensive boards and get his shots right up.

“Ethan did a nice job of finishing around the rim,” Johnson said. “He’s a high energy, high motor guy and just continued to battle inside for us. Tonight was a testament to how hard he’s worked this season.”

“I feel we found out tonight we can start competing with teams,” Carlson said. “When we execute and play as a unit, we’re a really tough basketball team. We’re asking sophomores and juniors to grow up in a hurry, but we are certainly making strides.”

Rollinger finished with a double-double of 23 points and 11 rebounds on the night. Rickels had 13 points, two steals and two assists, followed by senior Derron Hughes with seven points and four assists.

“A win like this gives you a boost of confidence and excitement,” Johnson said. “Both teams compete intensely for the win tonight. These are the wins you really enjoy and remember.”

Benton (0-9) will host back-to-back home games versus South Tama on Tuesday and Independence on Friday. VS (4-6) will also quickly turn around for Tuesday’s away game at Clear Creek-Amana and continue on the road Friday at Center Point-Urbana.