You are the owner of this article.
Edit Article Add New Article
You have permission to edit this article.
Edit
Welcome, Guest
Home
COVID-19
News
Sports
Obits
Lifestyle
Multimedia
Classifieds
Marketplace
Share This
1 of 8 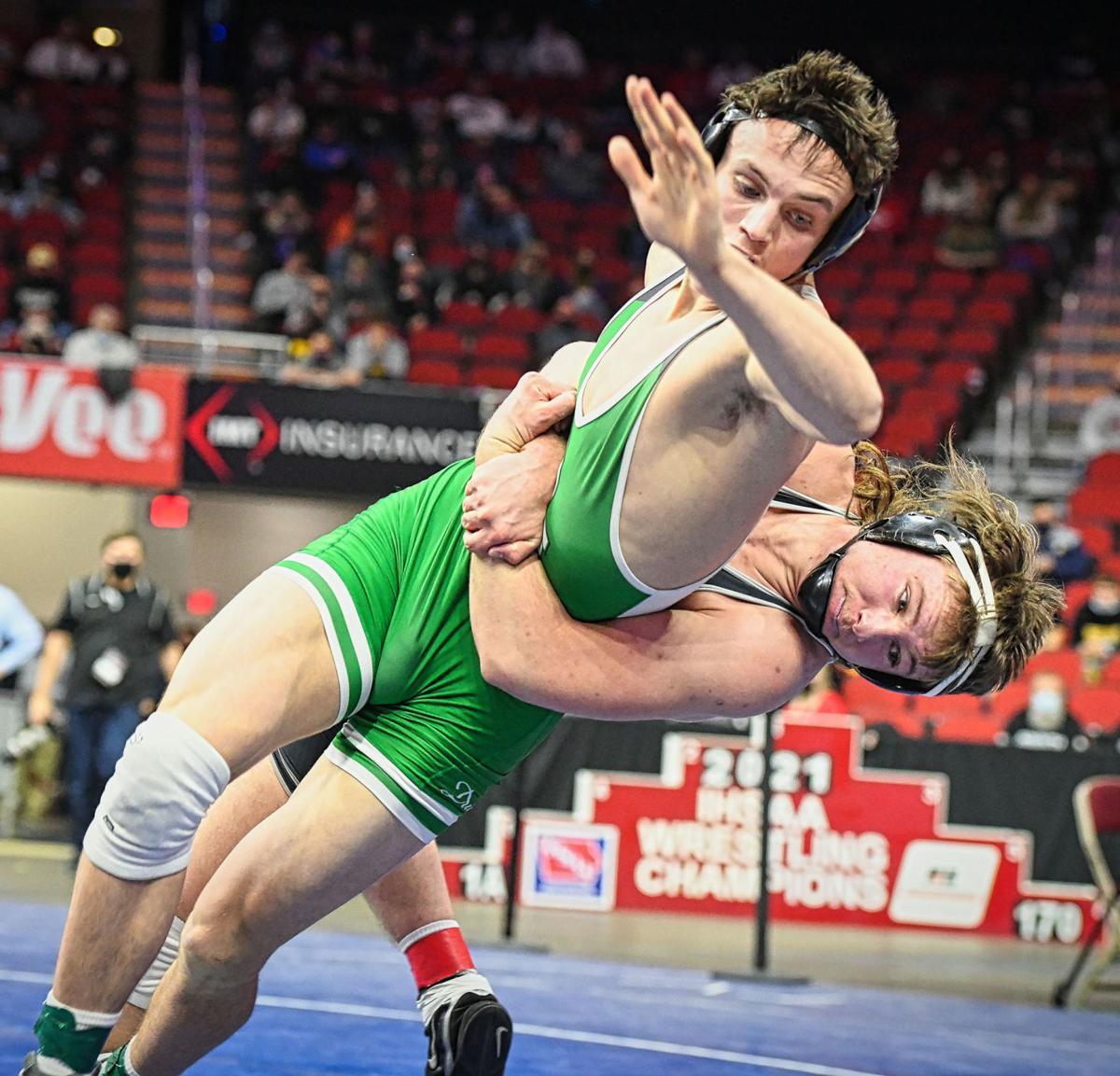 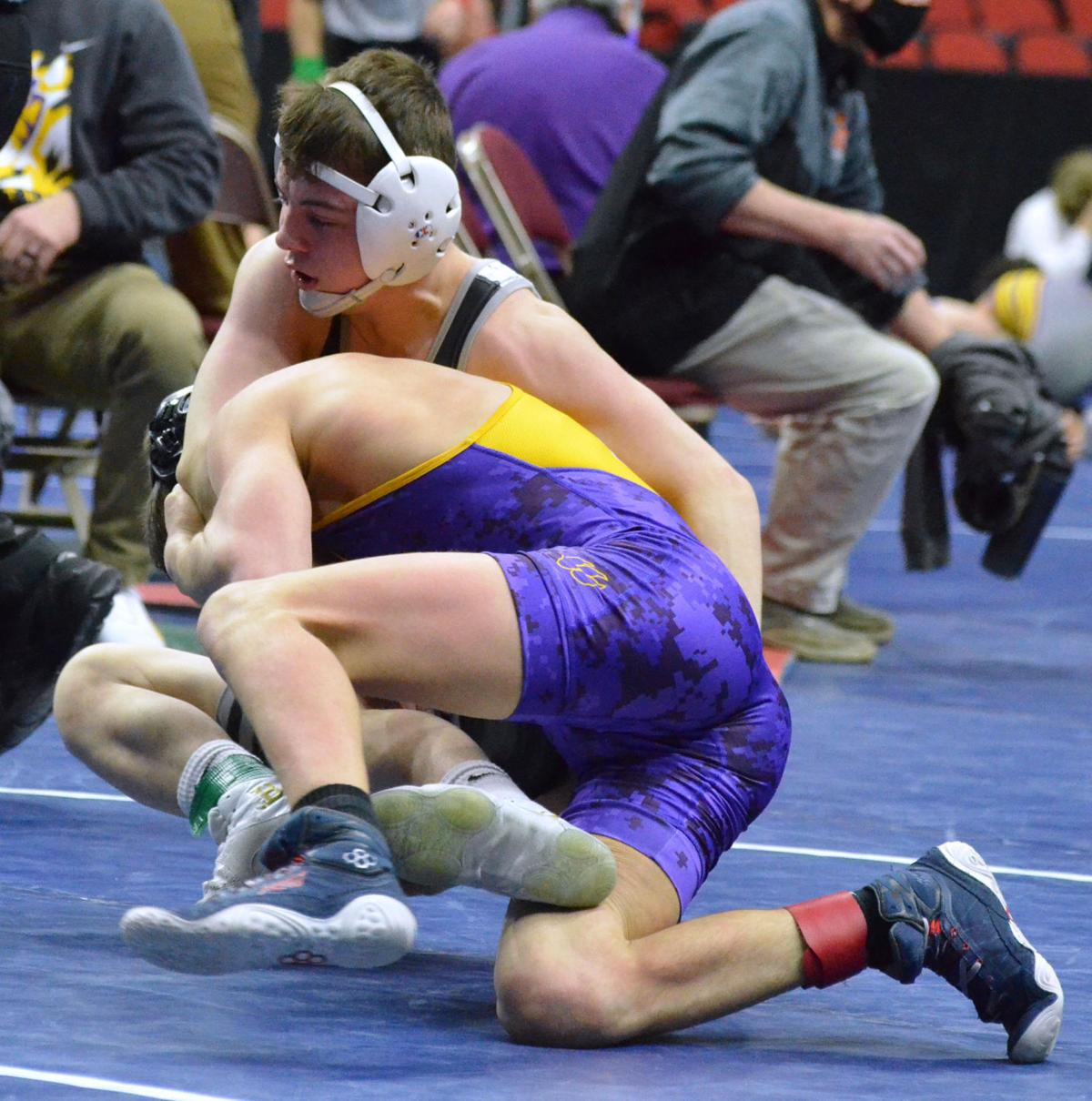 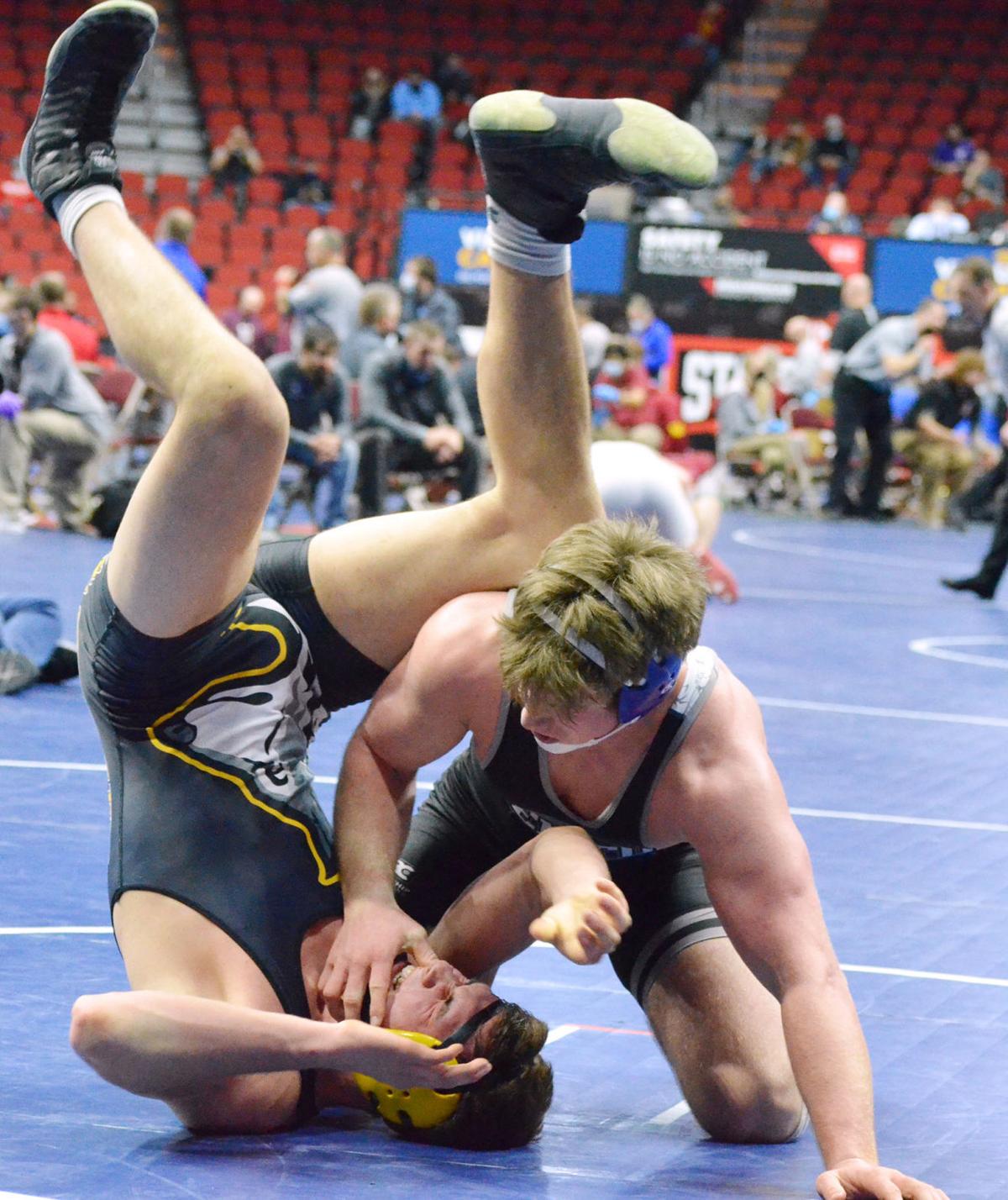 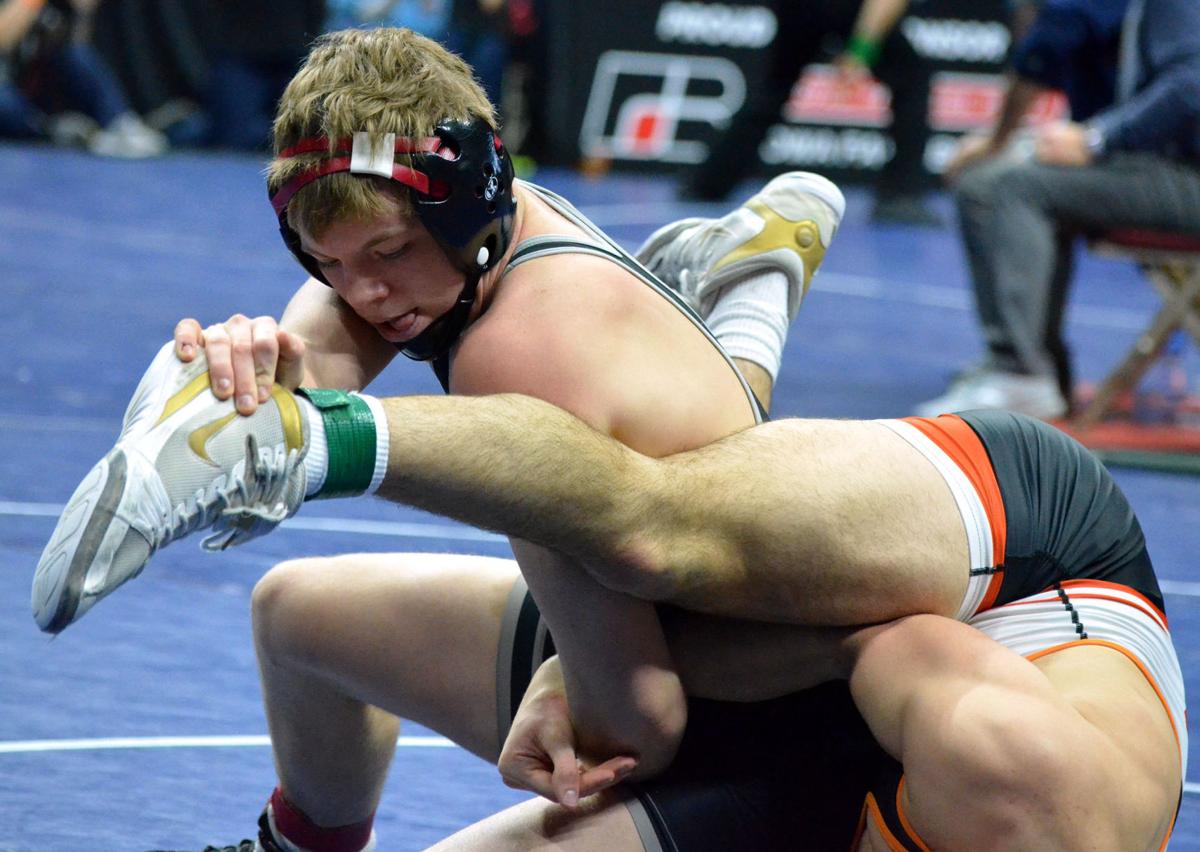 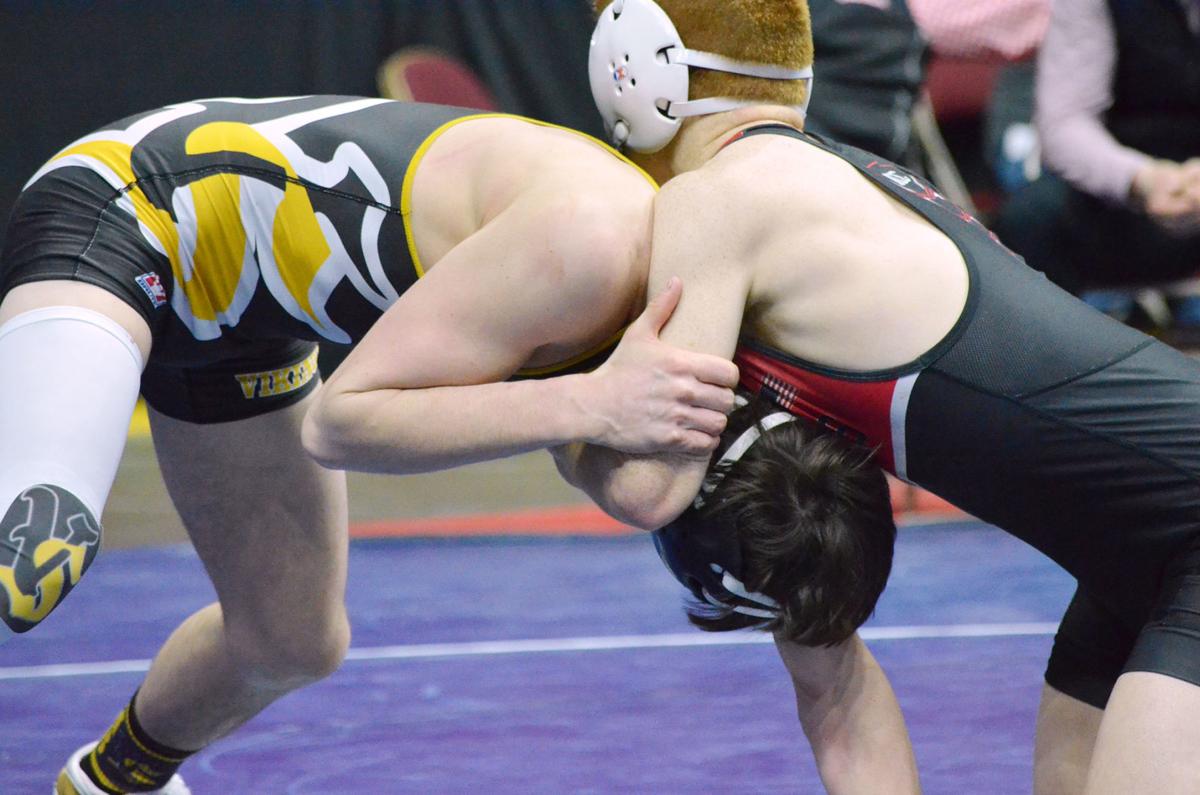 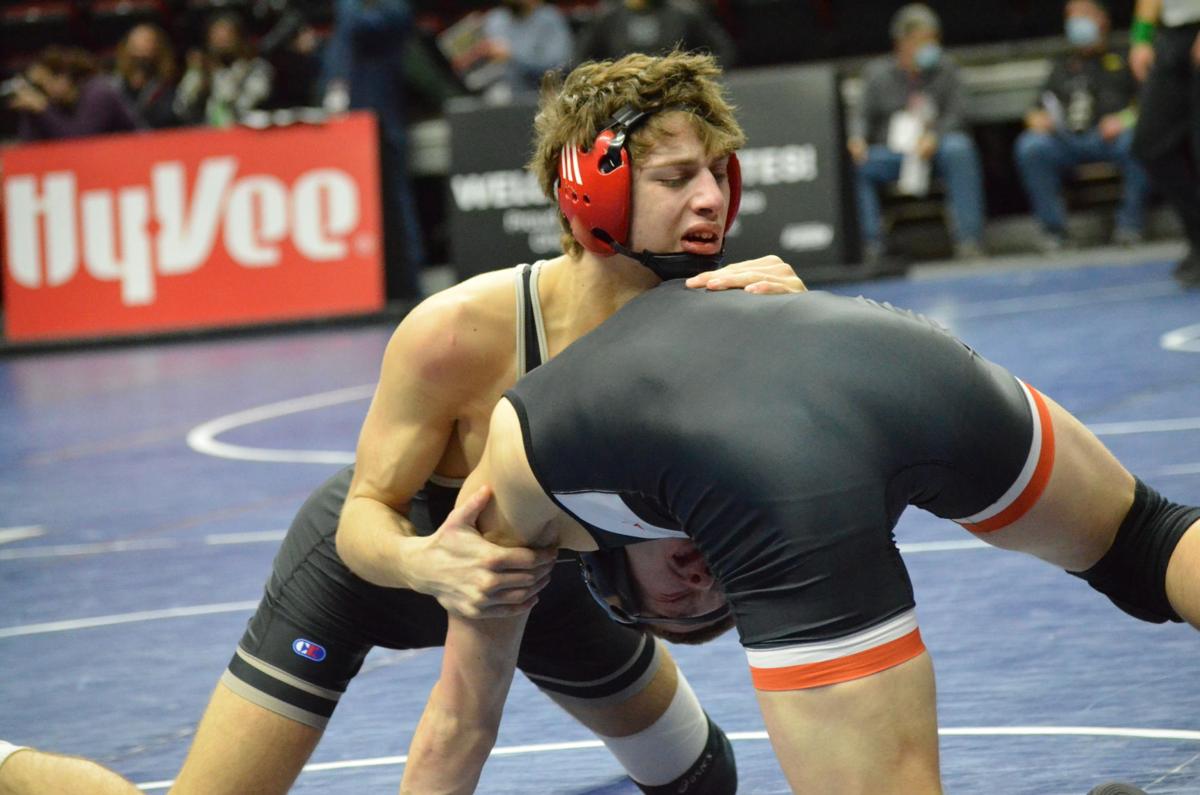 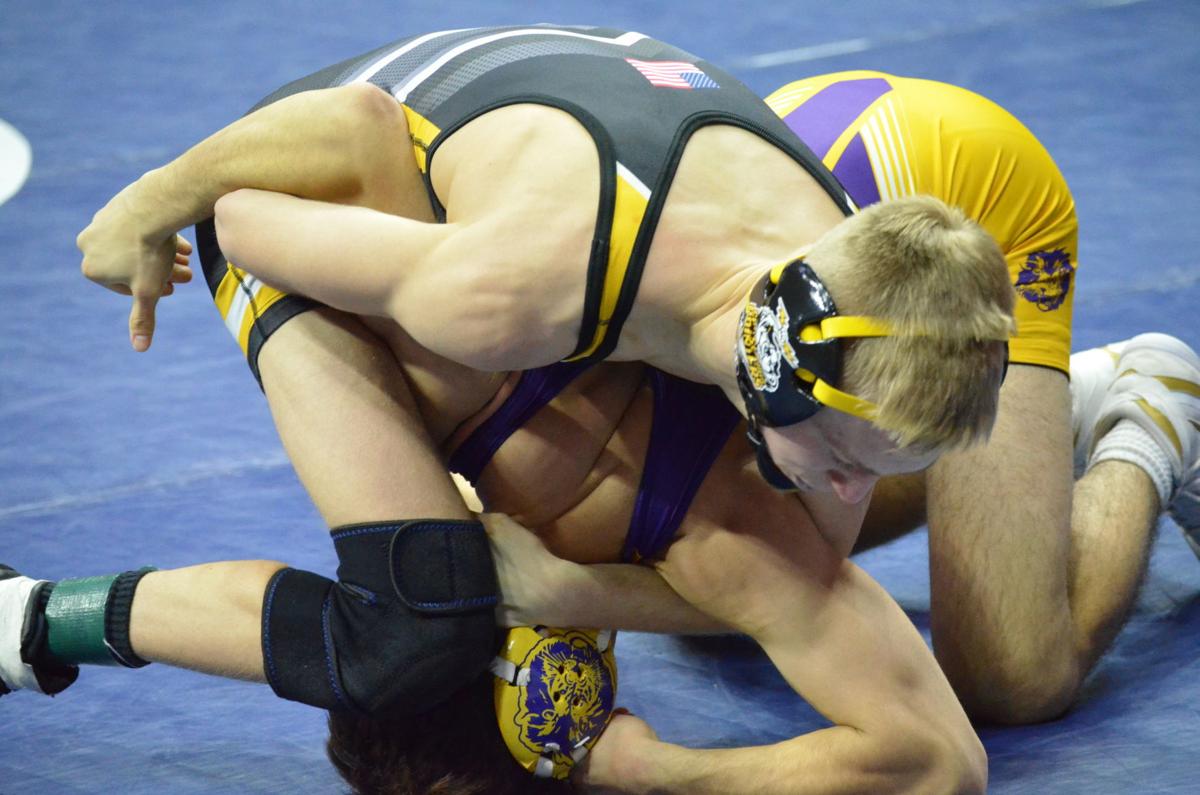 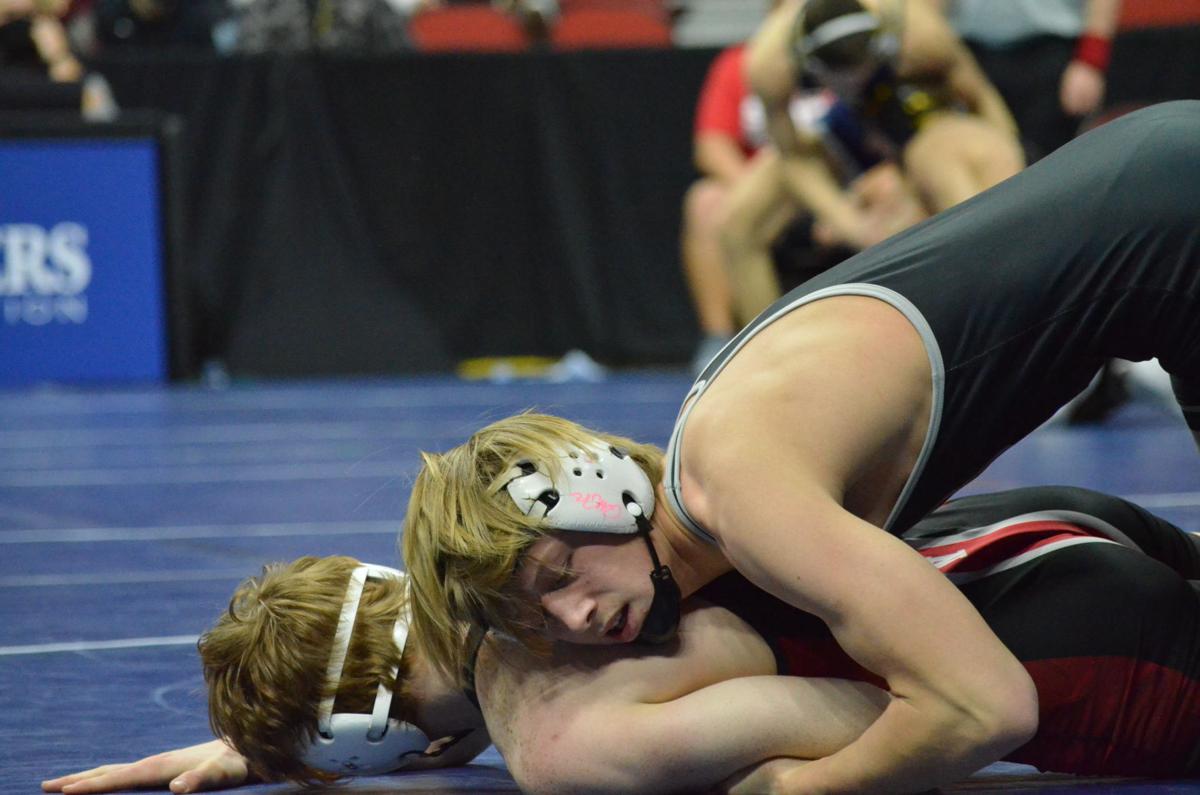 DES MOINES — It was less than 10 seconds.

Union Community’s Adam Ahrendsen stretched his arms behind his head as he lay prone on the mat. He breathed in and out once, twice. Then he picked his arms up from under his head, rocked forward and stood up from the mat.

It was less than five seconds.

Osage’s Spencer Moobery shot in on Ahrendsen to being overtime of their Class 2A 182-pound state championship match. Ahrendsen held off the initial shot attempt, and the pair remained locked, fighting for control.

In the final five seconds, Ahrendsen began to lift Mooberry from the belly while stepping backward in an attempt to throw the Green Devils wrestler. He

Mooberry stuck out his foot at the last instant, tripping Ahrendsen.

The Knights three-time state finalist crashed to mat on his back. Moobery turned over into a position of strength, giving him two takedown points and the state title.

“That’s his style, and it’s dangerous for a reason,” Union head coach Bart Mehlert said Saturday night. “Usually it’s dangerous in a good way for us, but (Saturday) it didn’t work out for him. I was telling him during the match ‘Stay on leg attacks,’ but he likes being upper-body. That’s where he wants to be.”

Ahrendsen (22-1) came back from a pair of deficits to Mooberry (43-2), using a second-period reversal to knot the match at 2 and a final-minute takedown to even the line at 4-all. The pair wrestled earlier this season, with Ahrendsen winning 7-4.

Ahrendsen was in line to become Union’s fourth multiple-time state champion behind newly-minted Hall of Famer Trey Clark, Jacob Holschlag and Max Thomsen. All three went on to college wrestling careers, and Ahrendsen will head to the University of Northern Iowa, just like Holschlag and Thomsen did.

“Nothing to hang his head about — runner-up as a sophomore, champion as a junior and runner-up as a senior,” Mehlert said. “Everybody wants to win it, you know, but being in the finals is a big deal, too.

“He has five years ahead of him at UNI, so maybe that will light a fire in him and we’ll see what he can do at the next level.”

Knights junior 160-pounder Hunter Worthen bounced back from Friday’s quarterfinal loss to place fifth. Worthen (37-6) fell into the fifth-place match after. Saturday morning loss, but bested Grinnell’s Landon Kirby, 7-1, to end his season with a win.

“We talk about finishing odd,” Mehlert said. “You want to get the next best thing even if you can’t win it. That’s an odd finish. That’s what Hunter did.

“Hunter’s one of the hardest working kids in our room, and I expect him to be a leader this summer and next year.”

Benton Community came home with a pair of medals.

Junior Jaiden Moore placed fourth at 120 pounds while senior Austin Roos walked off the mat for the final time with a win in his final match. He placed fifth at 182 pounds by besting Winterset’s Riley Hoven, 7-3.

Roos (36-9) claimed a takedown in each of the first two periods, then rang up three in the third on an escape and takedown.

“Obviously not what I came here for, but overall it was a good tournament and a strong finish to the season,” he said Saturday.

Moore garnered a 4-1 decision to reach the third-place match, and led Zeimet early on after a takedown. But Zeimet escaped, then got a takedown and multiple two-point near-fall calls in the remainder of the first period to lead 7-2. The Sabers wrestler added a takedown in the second and a two-point near-fall in the third. Moore closed the match on a three-point run, but it wasn’t enough.

“I got that first takedown, and then he countered and got a takedown of his own,” Moore said. “He was just really tough on top, and we knew that.

“When he was on top, he got a couple turns. I wrestled hard, but I just gave up a couple turns there and it opened the match up.”

Long after it was over, Brady Ortner simply offered: “I ended up the same place as last year. I wanted to be one step higher, but there’s always next year to get to the top of the podium. I already have plans to go to club and push to be the best I can. I want to be a champion.”

It was all the junior could do after losing his final three matches of the year. Ortner (37-12) followed up a Friday semifinal loss with what he felt was a hard-luck defeat in a 9-7 Saturday-morning loss.

Sioux Center’s Dao Keokhamthong led 4-2 after two periods before a wild third saw the grapplers combine for 10 points. Ortner had to give up a late escape point in an attempt it tie the match, but couldn’t in the end.

In the fifth-place match, he was pinned by Clarion-Goldfield-Dows’ Reed Abbas.

“Coming back from that semifinal match, I just tried to get my head straight. But matches didn’t go the way I wanted. I guess there could have been some say both directions, but I’m not putting anything on the refs. It’s all on me. I tried to battle back for third, but I had two tough losses.”

Partly cloudy this evening, then becoming foggy and damp after midnight. Slight chance of a rain shower. Low 36F. Winds SE at 5 to 10 mph.

Partly cloudy this evening, then becoming foggy and damp after midnight. Slight chance of a rain shower. Low 36F. Winds SE at 5 to 10 mph.