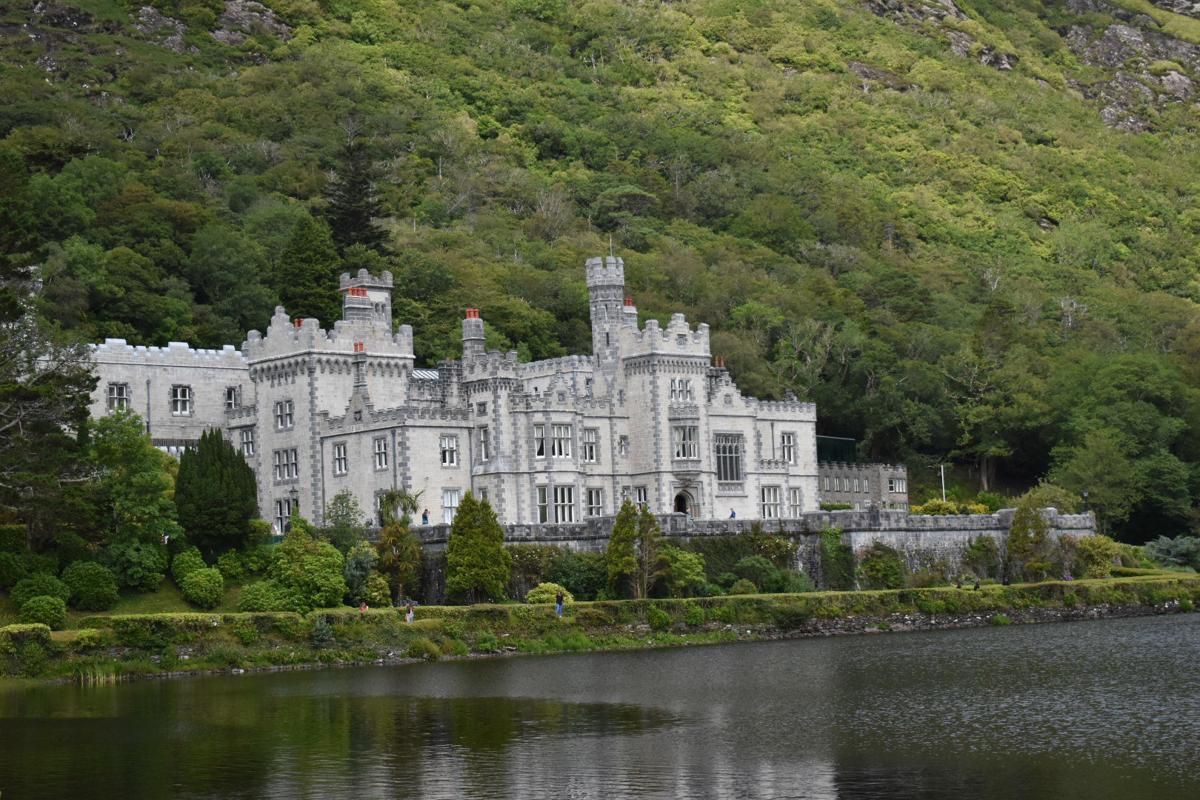 Kylemore Abbey was the home of Mitchell Henry and his family until the estate was sold in 1902 to the Duke and Duchess of Manchester. Today, Kylemore is the home of an Order of Benedictine Nuns. 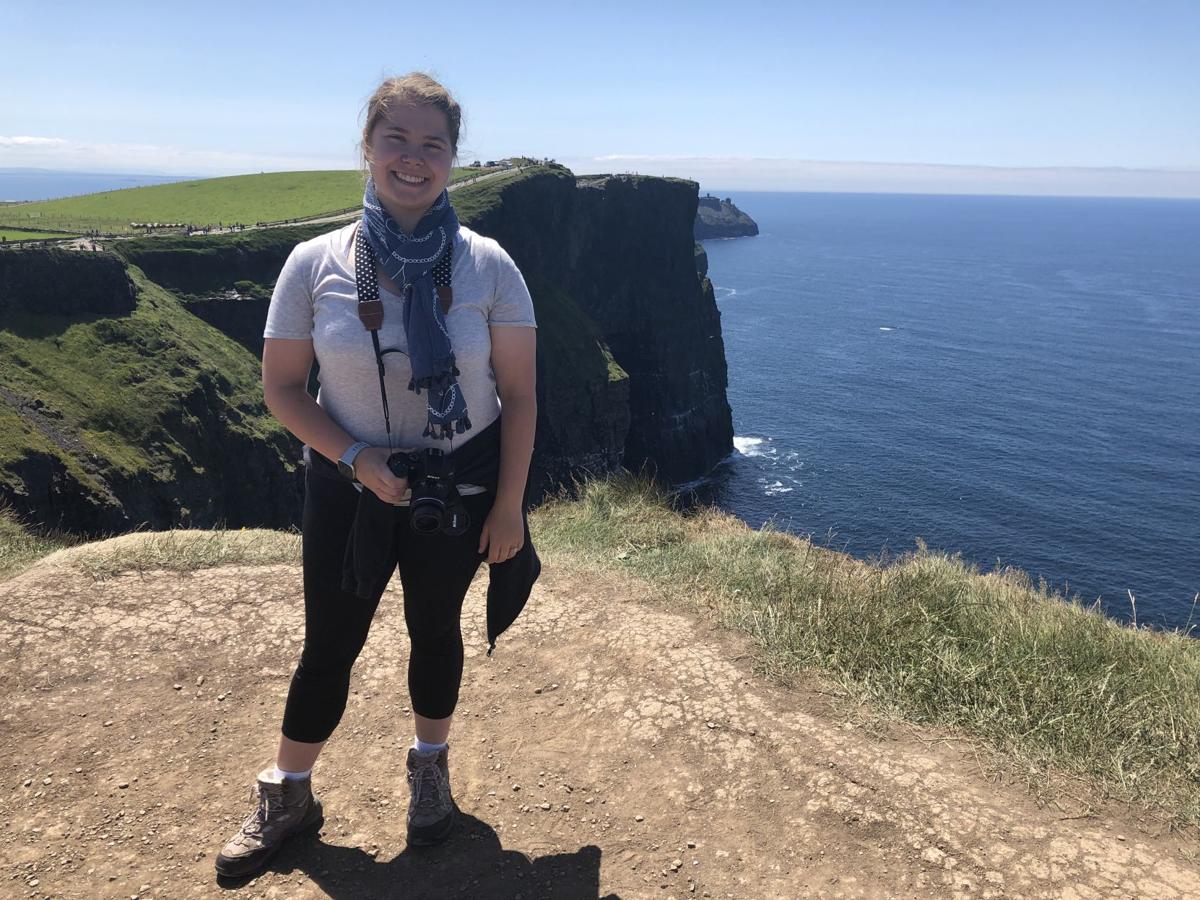 Anna Curtis, author, at the Cliffs of Moher in Co. Clare, Ireland.

Kylemore Abbey was the home of Mitchell Henry and his family until the estate was sold in 1902 to the Duke and Duchess of Manchester. Today, Kylemore is the home of an Order of Benedictine Nuns.

Anna Curtis, author, at the Cliffs of Moher in Co. Clare, Ireland.

July 7, 2019 — The day that will be engraved in my head for the rest of my life. This is the day that I left for my third country — Ireland. I had traveled out of the country once before when I was 16. I went to England and France with other high school kids from the Marion area. I was ecstatic to be traveling once again. As a result of my previous trip abroad, I had become an international traveling addict. I hoped that this trip would cure my travel withdrawal--temporarily.

Just a minute ... before I get too far into this story, I should probably share a bit about myself and why I went to Ireland. No, it wasn’t just to temporarily satisfy my travel addiction, but actually through a study abroad program through Kirkwood Community College (Kirkwood). I was six credits away from completing my Associates of Arts degree, and I could not think of a better way of obtaining these credits. By the time I had left for Ireland, my classmates and I had nearly completed our courses. We had done most of the coursework online state-side with a few face-to-face classes with our professors so we could be briefed about our itinerary and flight details. After graduating from Kirkwood in August, I am currently working on my Bachelor’s of Science in Public Relations with a minor in Sociology at Iowa State University. Enough introductory stuff — back to July 7, 2019.

We all boarded the bus, and we all started our drive to Chicago. Our flight was leaving out of O’Hare International Airport (O’Hare). One of the nation’s busiest international and domestic travel hubs in the United States (US). I’ve traveled both internationally and domestically before, but I had never flown directly out of O’Hare itself. I had only ever had domestic connection flights through it. I was terrified of what may happen but also ecstatic to see the Irish countryside and experience the culture for the first time.

The flight over was manageable, but jet lag was going to mess with me for the next few days until I adjusted to being 6 hours ahead of my regular schedule. Waking up at midnight — starving --was a blast.

During my first day exploring Dublin, the only thing that kept me going was the excitement of being in a new city that I had heard so much about. The town that my ancestors had known as the center of British control in Ireland before Southern Ireland became an independent state in the 20th century after the 1916 rebellion.

After about a week in Dublin, the capital of Ireland, I left for the Western part of the country. We spent a few days in the city of Galway before leaving for Connemara and the Aran Islands. This is where we dove into the deep Gaelic culture of Ireland and hear the old language of Ireland being spoken. After a night on the island of Inishmore, the largest of the Aran islands, I could feel the deep cultural heritage of Ireland coming to life. I had never before felt my own Irish roots start to grow deeper. My ancestors had left Ireland nearly a century ago to settle in the US in hopes of a better life.

However, this story isn’t unique, according to the US Census Bureau, I share a similar background with about 10.1 percent of the population — this is about 33 million people. This number is larger than the total population of Ireland today, which was 4.784 million in 2017. Many of these people have roots in western Ireland, especially from Connemara, the mountainous area of the country. The poor soil quality already made farming difficult, but when An Gorta Mor, Irish for the “Great Hunger” struck this region was hit especially hard. “Many people in this region (Connemara) have family across the ocean in the United States,” said Micheal Gibbons, our guide for our time in Connemara. The connection to America and other countries run deep.

Technology has allowed families that are separated today to keep in touch more effectively. However, during the famine in the late 19th century, having a family member emigrate was just like them actually dying. Family members left in Ireland would probably never see that person again.

Connemara’s scenery is best described by Oscar Wilde, an Irishman himself as “a savage beauty.” The unforgiving terrain is breathtaking, and some of my favorite photographs are from this region. We stayed in the village of Tully Cross in cabins made for visitors. Other colleges use them for semester programs, but they are rented out to visitors during the summer months. I had the opportunity to actually get to know the locals of the village. Some of the personalities I met will not be forgotten any time soon.

Along with getting to know the locals, I also got to know the ancient Celts that occupied Ireland before it was Christianized by missionaries. Michael Gibbons, our guide, is an archaeologist and specializes in these ancient holy sites. We visited our fair share of sacred wells and early churches that were not much bigger than an original one-room schoolhouse.

When our trip came to an end, I felt relieved to be coming back stateside of the pond. Partly because I was missing one gastric endeavor — a massive hamburger with every topping imaginable on it. Something I could get as soon as I got off the plane. The charm of the Irish people had weaseled into my heart, and the last thing I wanted to do was leave this beautiful country. Every time I leave a country, I feel that I leave a piece of myself behind. The ties to this country were started with my own ancestors, knowing that there was a chance that they would never go back to their homeland. In a way, they did go home — through me. Someday I too hope to return to the Emerald Isle.