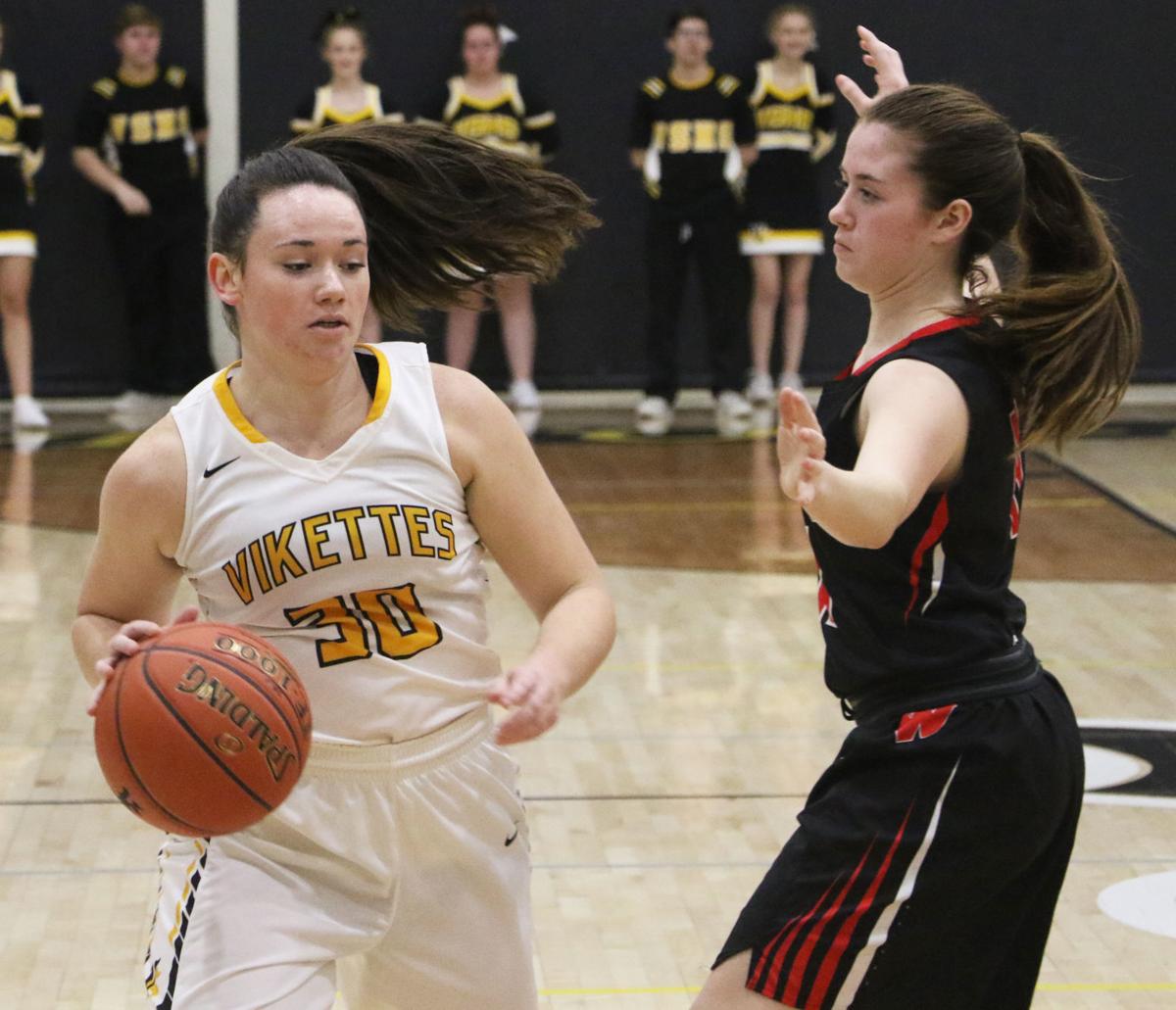 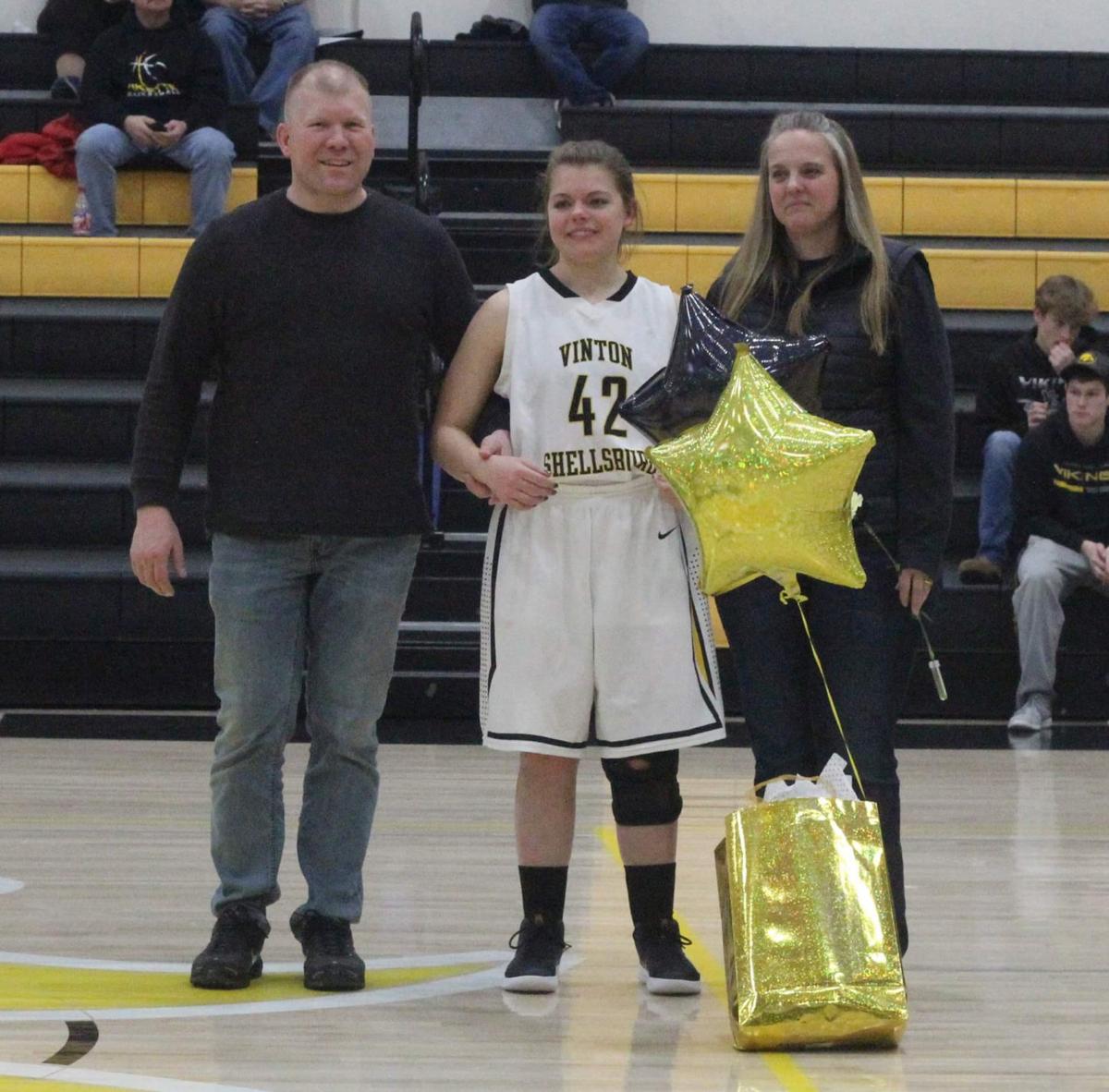 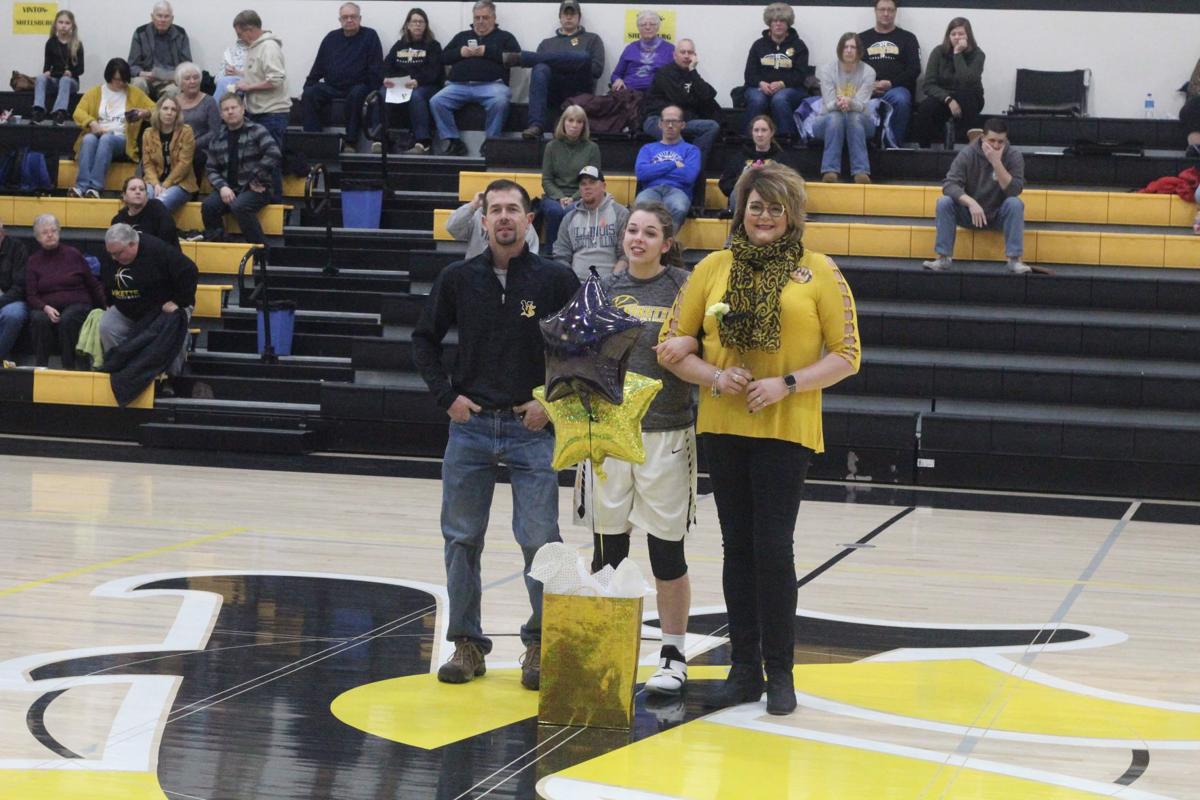 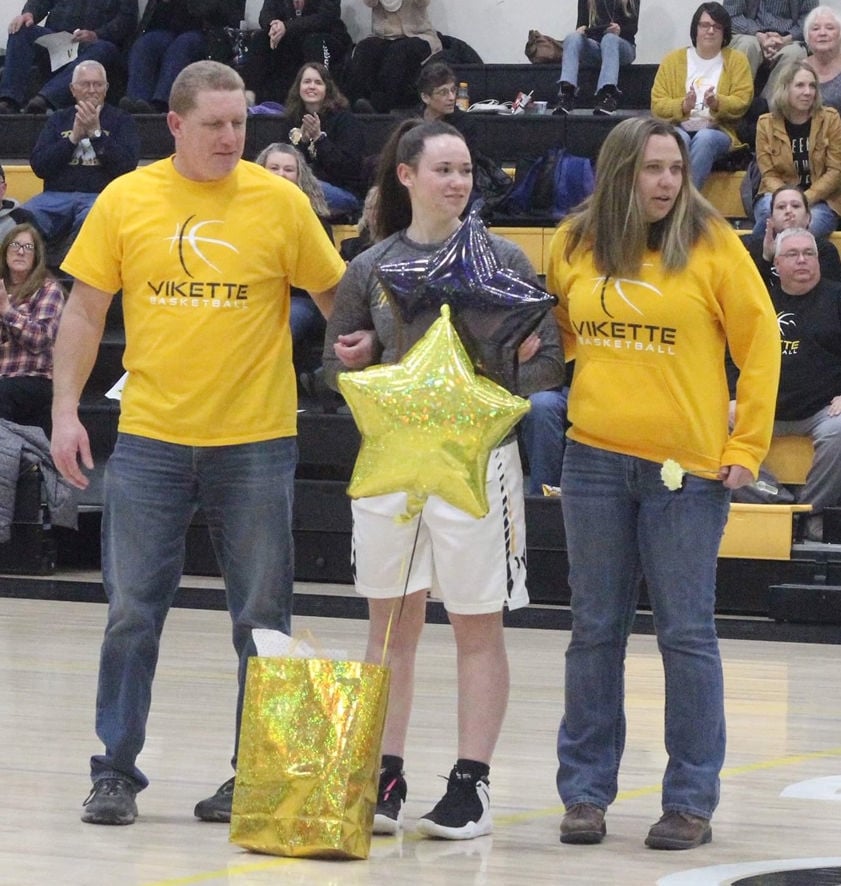 Rich Haisman nibbled at his cookie between questions. The Vikettes’ head coach, fresh off a win in the regular-season finale in his first year with the team, took the opportunity to praise what he called the “victory cookies,” the peanut-butter-and-M&M-laden treats sometimes given to his team after games.

Davia Herger strongly disagreed with the “victory” aspect, saying the straight-up chocolate chip cookies were the way to go. The Vinton-Shellsburg senior and her teammates still ate them up, along with their competition.

The Vikettes (11-10, 9-10 WaMaC) clinched their first winning season in a decade Tuesday night with a 62-48 win over Williamsburg with some of the biggest contributions coming from some of the most unlikely sources.

As Senior Night unfolded, it became clear that Herger and fellow classmate Kaitlin Meyer were determined to accomplish what they hadn’t yet in their careers. For Meyer, that meant breaking the double-digit barrier in scoring. She had come close a few times in her four years at Vinton-Shellsburg but could never quite get there. Last season against Williamsburg, she missed all four of her field goal attempts before fouling out.

Tuesday night, however, Meyer could hardly do anything wrong. She drained a pair of three-pointers and, as time expired in the third quarter, decided to take one more. She didn’t make it, but she has a decent excuse. A Williamsburg defender hit her on the wrist with her release, allowing Meyer to take three free throws with nobody around her.

She swished all three.

Indeed, her free throws pushed her over the double-digit threshold. Meyer finished with 11 points and three rebounds.

“Kaitlin has been just so close so many times to having that big game,” Haisman said. “She has so much potential. I told her she’s a pit bull because she gets that ball if she wants. When he attacks that rim, she is tough to stop. But tonight, she just said, ‘I’m gonna shoot a three,’ and she couldn’t miss.”

Herger has been a consistent starter throughout the year. However, with options such as Taryn Sutton and Lucy Howes-Vonstein on offense, Herger hasn’t been seen by opposing defenses as much of a threat.

Heading into postseason play now, teams may want to reconsider.

Herger finished with eight points on 3-of-5 shooting from the field and made her only two free throws of the night. But Herger’s true calling card all season has been her rebounding ability. She’s tied for third on the team with 3.5 rebounds per game and nearly doubled that number on Tuesday, grabbing six boards, including three offensive rebounds in the same possession.

“I knew it was an important possession,” Herger said. “Every offensive board can just be an extra score. When I got three in a row, I was like, ‘There’s no way they still don’t have a body on me.’”

The effort on that possession helped set the tone for the rest of the game. Once down by as many as eight points in the first half, the Vikettes staked a tie in the game heading into the locker room. On the first play in the third quarter, Herger made her move, grabbing those rebounds and finishing it off by forcing a held ball on what could’ve been a fourth rebound.

“She’s been dominating the rebounds for us all season,” Haisman said.

For all the successes Meyer and Herger enjoyed, there was one downside to it all. Sutton, a fellow senior and the team’s second leading scorer, was held out of the game with an illness, effectively changing the makeup of the team.

“It was harder for us emotionally,” Meyer said. “We wanted to pull it out with her with us.”

Haisman shared Meyer’s feelings on Sutton, who had played in every single game leading up to Tuesday night. He said Sutton “would have given anything to play.”

“But those girls stepped up so big,” Haisman said. “Williamsburg has a very good team... But it was just fun to see these girls come out.”

As the third quarter ended, the Vikettes had gained a three-point advantage over the visitors. However, a lockdown defensive effort from Vinton-Shellsburg limited the offensive rebounds the Raiders could get. In the end, the Vikettes held Williamsburg to just five points in the fourth quarter while putting up 16 themselves.

The afterparty surrounding Vinton-Shellsburg’s first winning season since 2009-10 was fitting. Haisman’s so-called “victory cookies” were fed to every member of the team as the girls put on a rave. Streamers, balloons and strobe lights filled the locker room in celebration.

The team will have just one more day to recuperate before heading up to Solon High School tomorrow for the opening round of the Class 3A, Region 5 quarterfinals. The two teams played each other on Dec. 6 at Solon with the Spartans taking a tight 51-47 decision. However, Herger and Meyer combined for just one point in that contest. Sutton scored 10 while Howes-Vonstein put up a game-high 19.

While it’s still unclear if Sutton will be available for Saturday night’s game at 5 p.m., Haisman said he’ll still prepare as he usually does: with sleepless evenings and middle-of-the-night epiphanies.

“I’ll watch a game or two of theirs and just kind of get some ideas and thoughts, and then I’ll let that stick around while I’m sleeping,” he said.

“Then, probably about 3 in the morning, I’ll go,” he continued before making the universal I-have-an-idea hand gesture, “’this is what I want to do.’ Then you won’t be able to sleep at night... Once my mind gets thinking, it doesn’t turn off.”

Some clouds early will give way to generally clear conditions overnight. Low 49F. Winds NW at 10 to 15 mph.