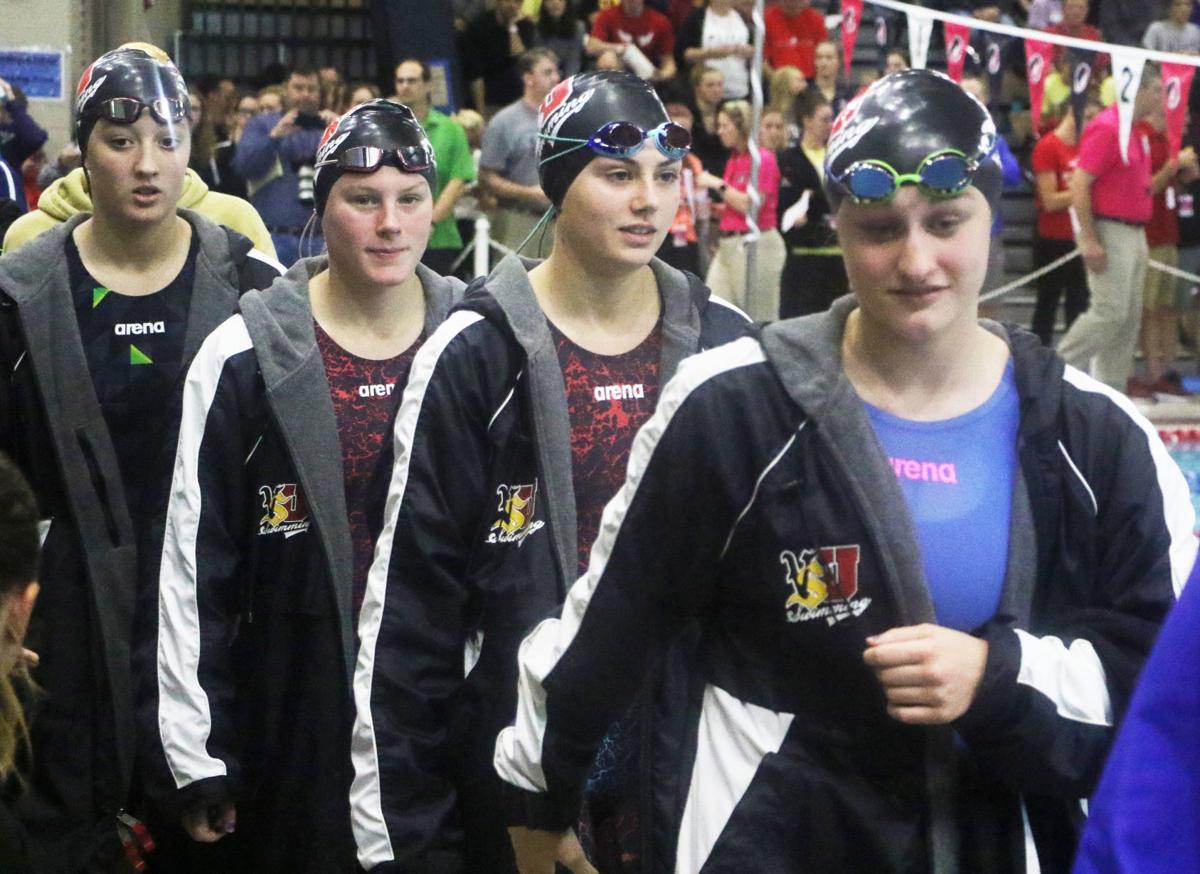 Clarissa Carolan, Lexi Goodell, Geordyn Webster and Justyce Dominick make their way around the edge of the pool in the pre-meet parade Saturday. 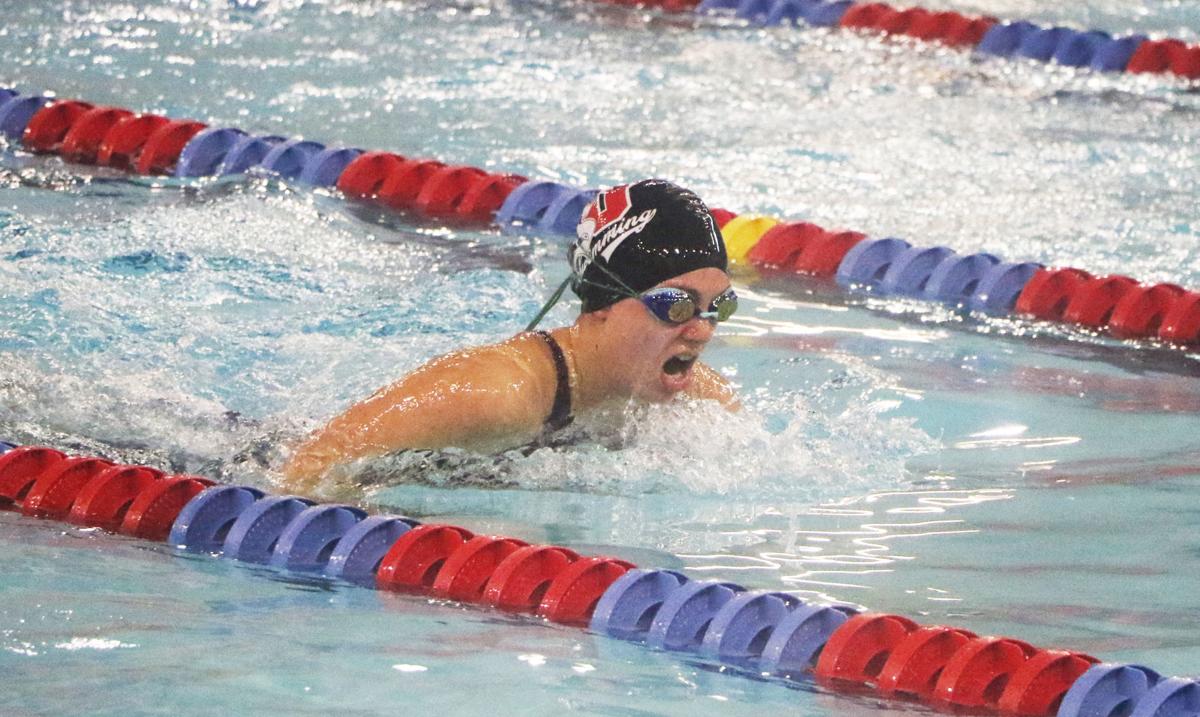 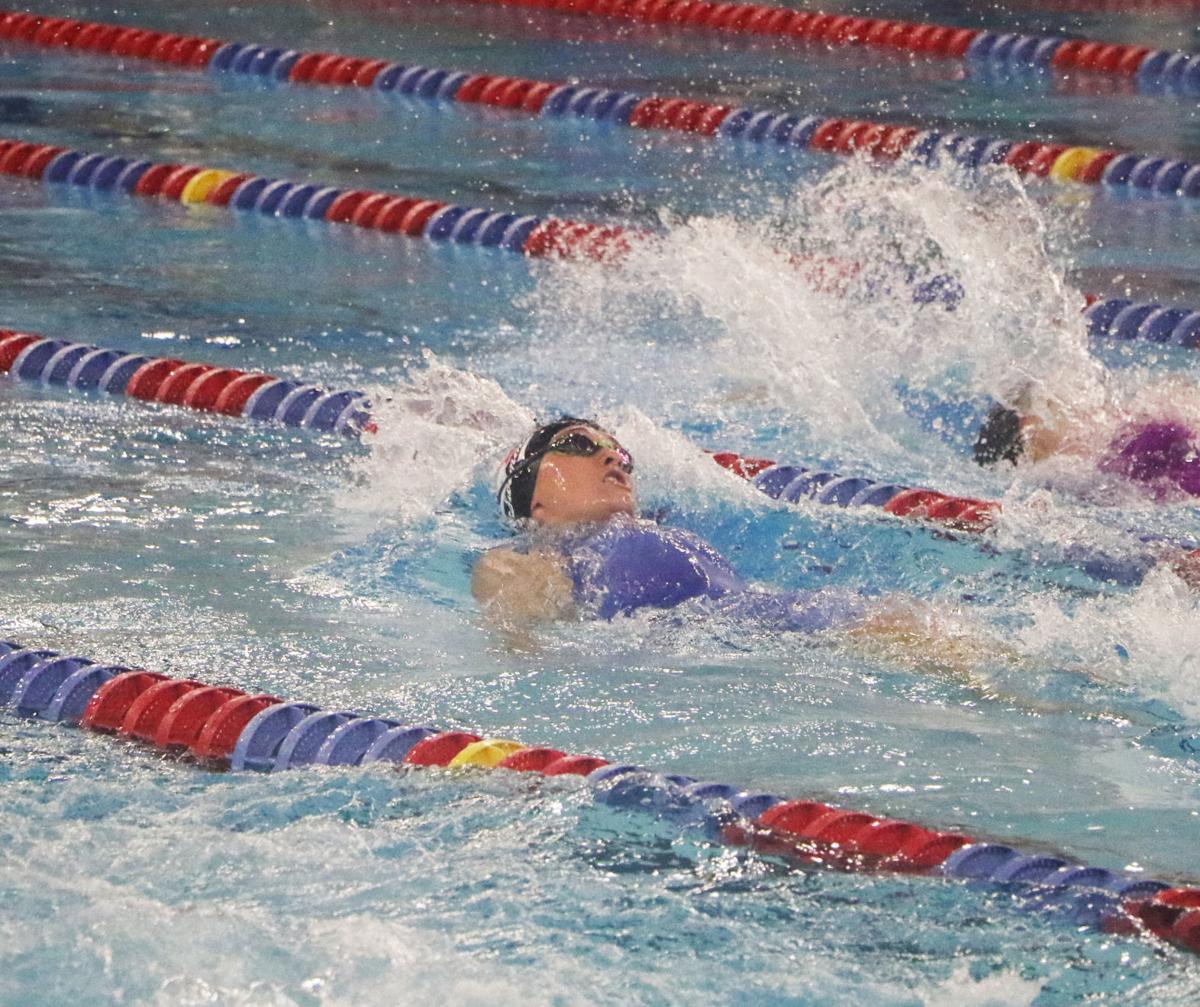 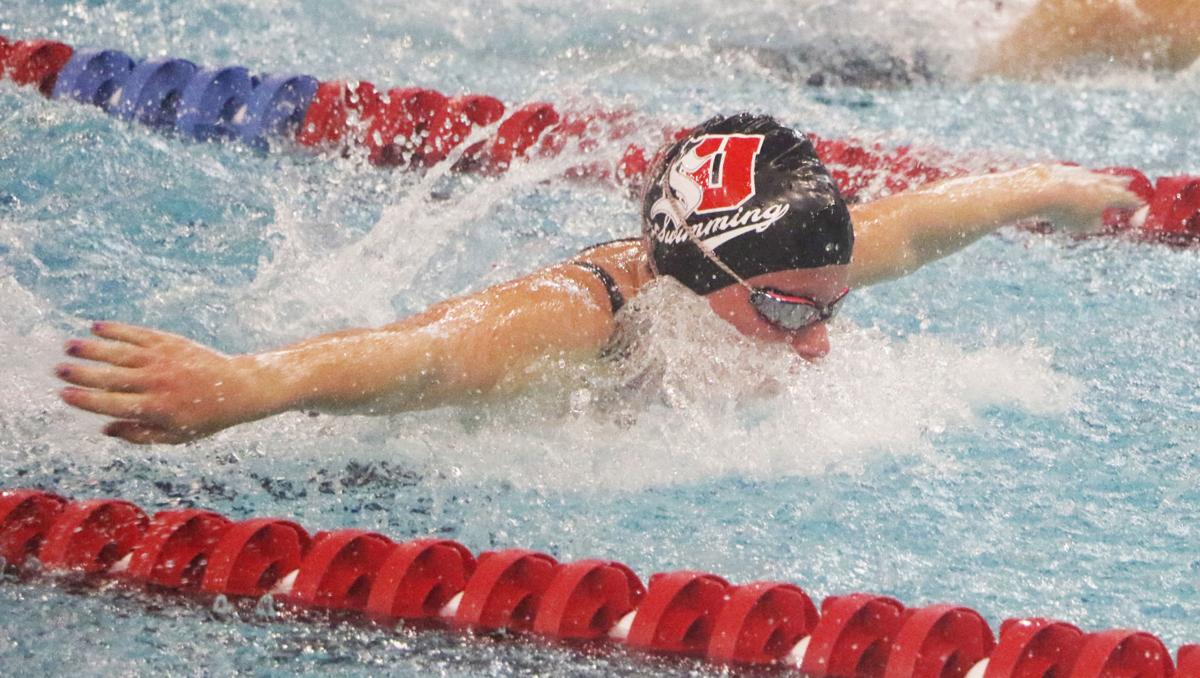 Clarissa Carolan, Lexi Goodell, Geordyn Webster and Justyce Dominick make their way around the edge of the pool in the pre-meet parade Saturday.

Ashley Hesson made about eight phone calls after she learned the Iowa Braille and Sight Saving School couldn't host practices. Each call resulted in roughly the same response.

The logistical nightmare to find a suitable pool to host the VSU swimmers for after-school practice sessions – from locked doors at the few venues to approve their visits, to having to line up busing, all while coordinating with 23 girls from three different schools – should’ve been the setback to doom the team.

But every practice day, the girls boarded the buses at 4 p.m., drove about an hour to their destination, and hoped to get an hour or so in the pool to break up the monotony of strength training on land.

“It was a lot of jumping around and a lot of making phone calls at 9 o’clock in the morning,” Hesson said. “It was a lot of long days and homework on the buses and trying to take naps.

“Everything has just been like fighting tooth-and-nail to really get the bare necessities of what we needed this season.”

The first VSU team to make the state competition last season might still be the only one in its history if the circumstances had negatively impacted it.

On Saturday, Geordyn Webster, Justyce Dominick, Clarissa Carolan and Lexi Goodell made sure that wasn’t the case. Three of the four girls returned from the 2018 team in the 200-yard medley relay along with newcomer Dominick to post a 1:55.77 finish at the state finals in Marshalltown, good for 23rd place out of 32 teams and just 0.56 seconds off the school record. They looked like they belonged, winning their heat by 1.83 seconds over Decorah. That finish was also the fastest this iteration of the VSU 200-yard medley relay team has swam, beating out last season’s state meet performance of 1:57.45.

“It’s an honor to be on this team,” Webster said. “Last year, we lost [graduating senior Arabella Shepard], and we were really bummed. We thought we’d never make it to this place, and we proved to ourselves that we actually could.”

Dominick was practically groomed for the role she had to step into in replacing Shepard. She and older sister Geordyn had been competing against each other since Dominick was 8 years old through club teams. With a precedent for sarcasm already within the family dynamic, Dominick joked about her sliding into Shepard’s spot on the team.

“I guess they were pretty nice and welcoming,” Dominick said as her teammates stifled laughs.

Dominick anchored the last 50 yards of the relay, beating out 11 other schools’ final swimmers in individual times with a 25.47-second free in the finale.

Goodell, who swam second in the relay and finished with a 33.07 in the breaststroke, also said she was proud to be on consecutive state qualifying teams.

“It means a lot to me,” she said. “We’ve put in a lot of hard work into this. It’s a big deal because we didn’t really think we were going to come again this year.”

Coach Hesson couldn’t say enough about the way the 200-yard medley relay team – as well as the other 19 girls on the roster – handled the adversity of daily struggles just to get training time in.

“I’m so happy for them, that they were able to get to be so successful with the end of their season with what the middle looked like,” she said. “I think they came in [Saturday] ready to go.”

Hesson also mentioned the benefits of returning three girls a year after their first appearance at state competition. She said the whole experience of heading to Marshalltown and witnessing the pomp and circumstance of parades of swimmers and other celebratory affairs may have left them awestruck in 2018, but they used that knowledge to better stay in the moment over the weekend.

“It’s kind of anxiety-ridden and nerve-racking, just getting to swim,” Hesson said. “This year, they were much more calm. Everybody knew the layout of the facility, they knew the order of things. Everybody was just more calm and relaxed.”

Three of the girls – Goodell, Carolan and Dominick – said they were thinking of joining a club team and practicing together throughout the offseason in preparation for the next season. Carolan said the goal in 2020 is to shoot for the school record in the 200-yard relay. Webster said she’d like to pursue other activities in the meantime but is committed to coming back to the team when practices start back up in the summer.

When asked how they could convince Webster to stay with them throughout the offseason, Goodell responded in a way only a close-knit group of girls could.

“We’ll threaten her,” she said. Laughter echoed off the halls of the Marshalltown YMCA-YWCA.

“I believe it,” Webster deadpanned.

Sorry, there are no recent results for popular articles.